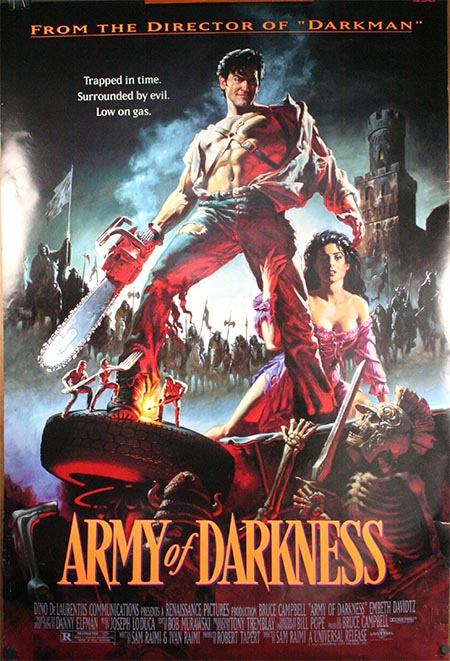 The Windsor International Film Festival is hosting a Halloween screening of Army of Darkness, with a pre-show introduction featuring members of Kordazone Theatre, at the Capitol Theatre on October 31, 2018.

Halloween falls into the Annual Windsor International Film Festival week for the second year in a row and the second time ever!

To celebrate organizers invite the public to join them prior to the movie screening for some Halloween fun.

Alcoholic beverages and food can be purchased in the lobby.

Put on your costumes and get ready for this Army of Darkness themed night.

One-armed Ash (Bruce Campbell), is transported by the powers of a mysterious book, back in time with his Oldsmobile ’88 to the 14th century medieval era. Armed only with a shotgun, his high school chemistry textbook, and a chainsaw that mounts where his missing appendage once resided, the square-jawed, brutally competent Ash quickly establishes himself as a besieged kingdom’s best hope against an “army of darkness” currently plaguing the land. Since the skeleton warriors have been resurrected with the aid of the Necronomicon (the same tome that can send Ash back to his own time) he agrees to face the enemy in battle. Ash also finds romance along the way with a beautiful damsel in distress, Sheila (Embeth Davidtz), and contends with his own doppelganger after mangling an important incantation.

Tickets are $14 for adults and $9 for students with a valid student ID.

Find out more about the Windsor International Film Festival here.