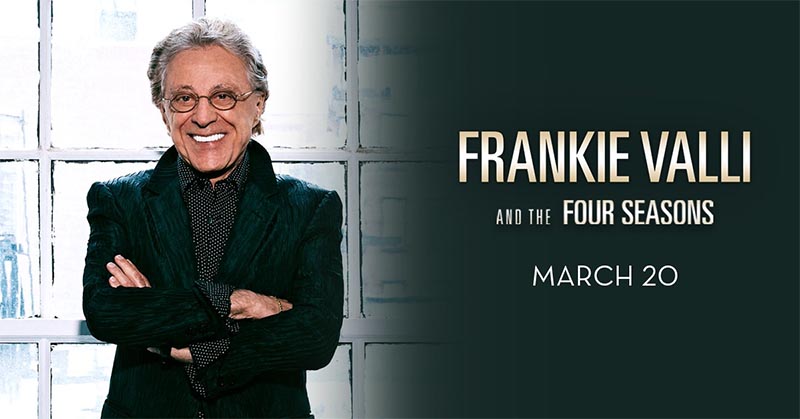 Rock & Roll Hall of Fame inductees Frankie Valli and The Four Seasons bring their legendary hits to The Colosseum stage at Caesars Windsor on Friday March 20, 2020.

Due to a concern for health and safety, Frankie Valli and The Four Seasons have postponed their 2020 tour including their show previously scheduled in The Colosseum at Caesars Windsor on Friday March 20.

At this time a new show date has not been scheduled, please stay tuned for further details to be announced in the future. Ticketholders can hold onto their tickets to be honoured when a new date is announced.

For ticket refunds contact Caesars Windsor or Ticketmaster depending on where you purchased.

As a New Jersey sensation, Frankie Valli and The Four Seasons emerged in the early ’60s with a debut performance on American Bandstand with their hit song “Sherry”, launching them to international stardom. From 1962 to 1978, Frankie Valli and The Four Seasons went on to have 71 chart-topping hits and sold more than 100 million records, which included some of the group’s biggest songs, “Walk Like A Man”, “Rag Doll”, “December 1963 (Oh, What A Night)” and “Big Girls Don’t Cry”.

While simultaneously performing with The Four Seasons, Valli began his solo career and released these popular songs “Working My Way Back to You”, “Swearin’ to God” and “Can’t Take My Eyes Off You”.

With over 60 years of experience in the music industry, Frankie Valli has captivated audiences with his remarkable range and classic sound. He was the hallmark voice of 60’s music and has since toured almost continuously. His songs have been omnipresent in such movies as The Deer Hunter, Dirty Dancing, Mrs. Doubtfire, Conspiracy Theory and The Wanderers. As many as 200 artists have done cover versions of Frankie’s “Can’t Take My Eyes Off You,” from Nancy Wilson’s jazz treatment to Lauryn Hill’s hip-hop makeover.

Valli’s most recent album “Romancing the ’60s,” which features his own stamp on some of his favorite ’60s songs, was produced by an original Four Seasons member, Bob Gaudio, and includes unforgettable new versions of “Spanish Harlem,” “Take Good Care of My Baby” and “Call Me.” Valli’s incredible voice and unmatchable talents have entertained fans of all ages for many generations and will continue performing for years to come.

Don’t miss your chance to see Frankie Valli and The Four Seasons live!