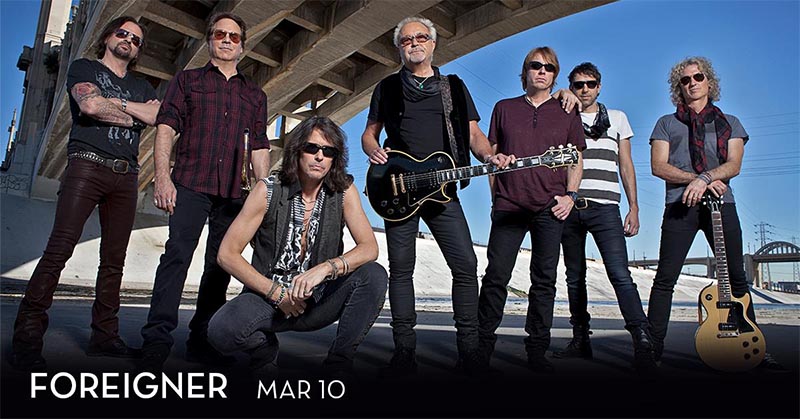 Iconic rock legends Foreigner bring The Cold As Ice Tour to The Colosseum stage inside Caesars Windsor on Sunday, March 10, 2019.

Foreigner is universally hailed as one of the most popular rock acts in the world with a formidable musical arsenal that continues to propel sold-out tours and album sales, now exceeding 75 million. Responsible for some of rock and roll’s most enduring anthems including “Juke Box Hero”, “Cold As Ice”, “Hot Blooded”, “Waiting For A Girl Like You”, “Feels Like The First Time”, “Urgent”, “Head Games”, “Say You Will” and the worldwide #1 hit, “I Want To Know What Love Is”, Foreigner continues to rock the charts more than 40 years into the game with massive airplay and continued Billboard Top 200 album success.

An unprecedented new level of energy lead the group to a re-emergence of astounding music that speaks to long time Foreigner fans and younger generations. The high visibility of the band’s songs continues to introduce their music to a whole future generation of fans.

“I Want To Know What Love Is” was featured in the summer 2017 box-office #1 “The Hitman’s Bodyguard” and “Waiting For A Girl Like You” is featured in Netflix’s “Stranger Things”. Foreigner is one of the most viewed YouTube Classic Rock artists with weekly viewings frequently hitting the million mark (Source: Next Big Sound).