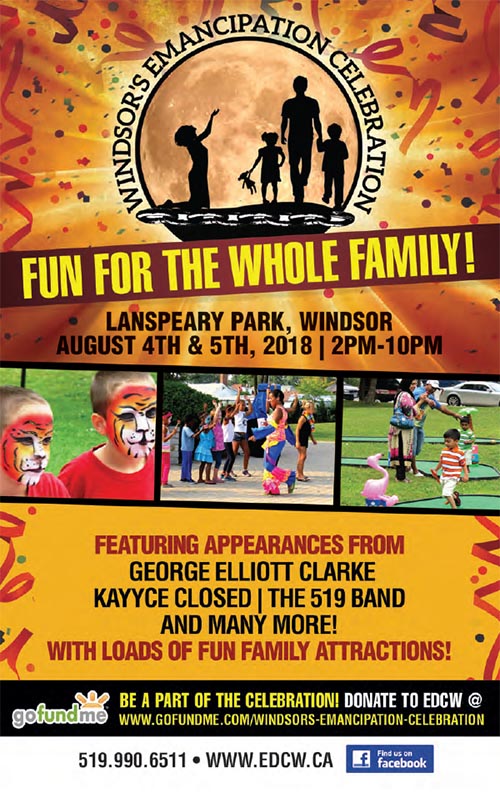 Children will enjoy characters from D&D Mascots, the exotic animals of Zoo2You, a dog show by Border City Barkers and so much more!

Emcees during the event include comedian Michael Geeter and Mark “Pawnman” Bradac.

The event celebrates the signing of the Slavery Abolition Action of Upper Canada on August 28th, 1833. Canada became the final destination for many slaves who escaped and took the “Underground Railroad” to freedom. This is a celebration of freedom, equality, those who risked their lives, and continued freedom for all.

“The celebration of the Abolition of Slavery in Canada is a significant part of Windsor’s heritage,” writes Mayor Drew Dilkens . “Emancipation Day celebrations took place in Sandwich as far back as 1838, at what is now Mic-Mac Park. At that point in time, Sandwich was a gathering point for abolition activity and the festivities were important community-building initiatives.”

“Emancipation Day has a special meaning to Windsor, stemming from the City’s role as a crossing point for thousands of slaves seeking freedom in the safe haven of Canada. Many made their first stop at Sandwich First Baptist Church in Old Sandwich Town before travelling further while others chose to settle in Windsor.”

Join the celebration and enjoy the children’s village, bbq village, sports village, live music, guest speakers, mini golf, and all of the heritage, beauty and culture Windsor has to offer.

Windsor is proud to support all people because we are all created equal and free.

Emancipation Day Windsor is a multi-cultural extravaganza and this event is set to be Windsor’s largest family BBQ.

In 2016 Windsor’s Emancipation Day Celebration was cancelled due to a lack of funding. Please consider supporting this event going forward by making a donation online at https://www.gofundme.com/windsors-emancipation-celebration/