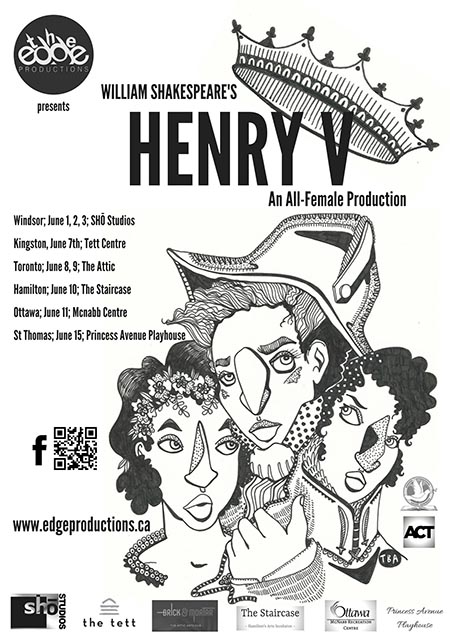 The Edge Productions opens their All-Female production of Henry V by William Shakespeare tour in Windsor at Sho Studios on June 1-3, 2018.

Henry IV is dead and Hal is now King. With England in a state of unrest, he must leave his rebellious youth behind, striving to gain the respect of his nobility and people. Touted by some as “Shakespeare’s action movie”, our all-female production is set against the backdrop of the Napoleonic war allowing us to focus in on the snap decisions of youth and Hals journey to become a worthy leader. With 25 roles, played by 8 women, this is going to be a creative and action packed trek through the battlefield – challenging perceptions and subverting expectations.

This production is touring in Windsor, Kingston, Toronto, Hamilton, Ottawa, and St. Thomas from June 1st-June 15th, 2018. More show dates are being added as well. The tour is traveling to more traditional venues but the show is also performing, for free, at youth treatment centres and in a female prison.

For more information or to purchase tickets please visit www.edgeproductions.ca/henry-v.html

The Edge Productions was founded in 2010 to help create a paid artistic opportunity for regional artists living in Windsor, ON. It has morphed and grown into an independent company that hires artists from all over Ontario. With a focus on making socially relevant work, The Edge produces shows that examine the human experience, in any form that may take.