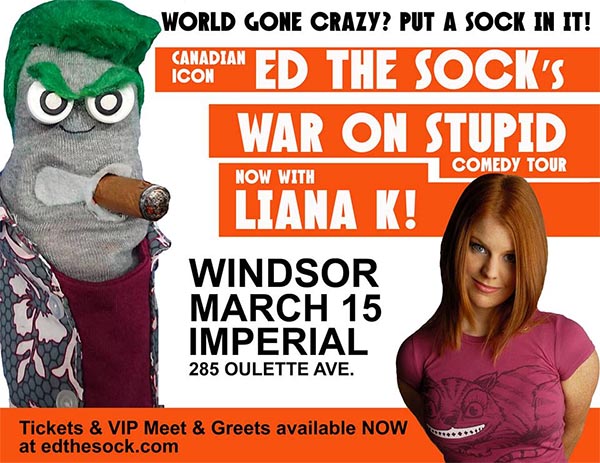 Ed The Sock brings his War On Stupid Tour with witty and vivacious Liana K of TV’s Ed & Red to Imperial Night Club in downtown Windsor on Friday, March 15, 2019.

Canadian icon Ed The Sock is the star of the longest-running Canadian TV late-night show and game-changer at MuchMusic. Ed The Sock has always been the one to call ‘bullsh*t’ on media, celebrities, politicians, big business and others who deserve it. Fearlessly speaking truth to power, Ed uses sharp incisive humour to bring the famous & infamous down to our level, cutting through the spin and saying what we all think, but out loud.

Joining this leg of the War On Stupid Tour is Liana K, the ‘Red’ half from Ed and Red’s Night Party. Now a successful Youtube influencer with a channel of timely videos deconstructing current events, social issues, entertainment and gaming, Liana brings her comedic insights & perspectives to the battle against idiots – but don’t expect those insights & perspectives to always align with Ed’s!

Being blocked on social media by outraged keyboard warriors is “what happens when right-wing snowflakes melt from the heat of my fiery wit!” exclaimed Ed on social media. “Even more reason why you should be getting your tickets now for my WAR ON STUPID tour and experience first-hand how I piss off both the LEFT and RIGHT with weaponized common sense. Plus, you’ll feel smarter!”

“Bringing a Canadian icon to Windsor is a pleasure, especially when it’s Ed the Sock while we’re in the most tumultuous of political times,” said Jon Liedtke, of Higher Limits. “With Ford Nation and Trump, social justice warriors and snowflakes, and an era of internet outrage and safe spaces, Ed the Sock is going to rip it all apart in a quest to expose the stupidity of it all.”

This special performance is brought to you by Higher Limits and Imperial Windsor.

Advanced tickets start at $10, available on Eventbrite.ca, and VIP Meet & Greets are available through edthesock.com