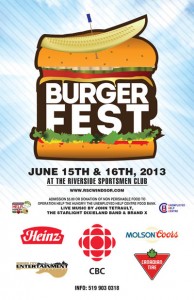 Burger lovers rejoice! Windsor Essex finally has a festival to celebrate the beloved hamburger. The first annual Burger Festival will take place on June 15 & 16 at The Riverside Sportsmen Club in Windsor Ontario. Burger Fest 2013 is being modeled after the National Hamburger Festival in Akron Ohio (the biggest in the USA). For the inaugural year, Windsor’s Burger Fest will be a scaled down version of the U.S. hamburger festival filled with lots of family fun, great entertainment and one of the largest assortments of hamburgers ever assembled in Windsor Essex one place.

The festivities include a professional hamburger competition featuring the burgers of area restaurants and hospitality services competing to win the votes of local celebrity judges. Four judges headed by Ted Whipp from the Windsor Star will determine the best burger based mainly on taste, creativity and presentation. The winner will receive the Burger Fest 2013 Trophy, publicity and of course bragging rights. On the second day, area residents can compete in the amateur burger competition. In fact, major media sponsor CBC Windsor will oversee the judging. Last year the CBC Windsor Best BBQ Burger Recipe Contest 2012 was created because they had reported on the award winning burger eateries in the area but wanted to know if their listeners could create amazing burgers too. Last year the winner was the Italian Burger by Tina Gobo. This year we get to see this competition evolve into the first ever burger festival.

Do You Have The Best BBQ Burger in Windsor? Then Enter The Competition!
Click here for details about CBC Windsor’s best BBQ burger recipe 2013 – it could be yours!