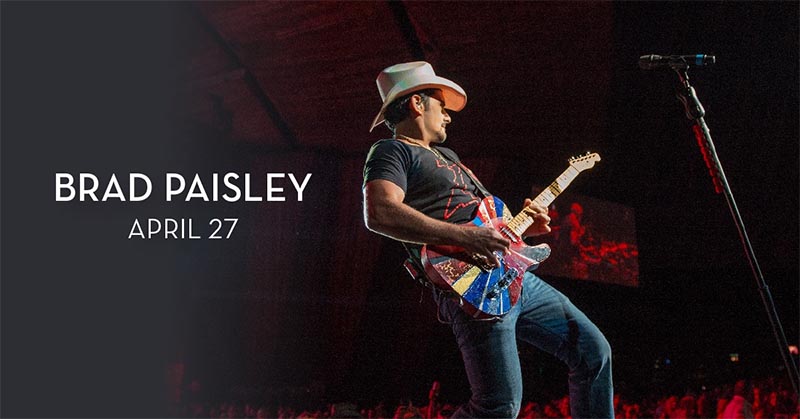 Brad Paisley is a consummate singer, songwriter, guitarist and entertainer whose talents have earned him numerous awards, including three Grammys, two American Music Awards, 14 Academy of Country Music Awards and 14 Country Music Association Awards (including Entertainer of the Year), among many others. He has been a proud member of the Grand Ole Opry since 2001.

Paisley has written 21 of his 24 #1 hits including his most recent smash, “Today.” The song resonated with fans around the globe with the music video garnering over 43 million views, so far. “Heaven South” is his current single from his 11th studio album, LOVE AND WAR, which was released April 21. It is his 9th consecutive studio album to debut #1 on Billboard’s Top Country Albums chart. On April 28 LOVE AND WAR was released as country music’s first ever visual album for a limited time exclusively on Apple Music and now is available on VEVO.

Paisley and Carrie Underwood returned to host “The 52nd Annual CMA Awards,” Country Music’s Biggest Night™ live this past November. This was their 11th year as co-hosts.