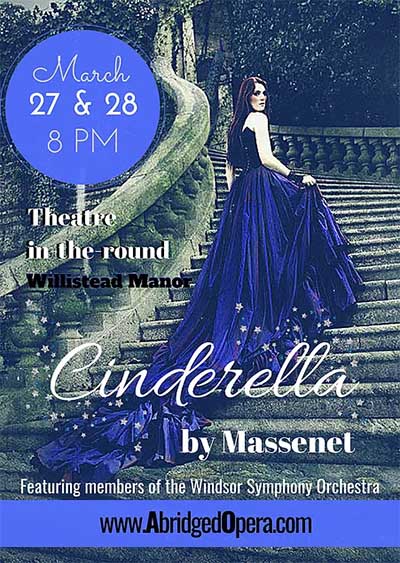 Abridged Opera Presents Jules Massenet’s Cinderella (Cendrillon), in a theatre in the round setting, with members of the Windsor Symphony Orchestra at Willistead Manor on March 27 & 28, 2019.

Massenet’s Cinderella is an opera—described as a “fairy tale”—in four acts to a French libretto by Henri Caïn based on Charles Perrault’s 1698 version of the Cinderella fairy tale.

This intimate performance is presented in a theatre-in-the-round style with the audience seated on the edge of the action as the classic fairy tale moves from room to room in the house. Audience members will immerse themselves in Cinderella’s world as they sit in the living room and watch the Evil Stepmother ready her daughters for the king’s ball, then move to the ballroom and witness Prince Charming and Cinderella fall in love.

Cinderella, composed by Jules Massenet, will be accompanied by a sixteen-piece chamber ensemble composed of Windsor Symphony Orchestra players, conducted by Daniel Wiley. The title role is sung by Windsor native Amelia Daigle whose “Golden Age” voice is stunning in this French repertoire. Other Windsor natives include Naomi Eberhard as an Evil Stepsister, Tracey Atin as the narrator, as well as Jake Flynn and Max Arvidsson of the University of Windsor, as aids to the Prince. Abridged Opera founder Erin Armstrong directs with her Music Moves Kids Senior Choir performing as the Fairy Godmother’s spirit helpers. The opera will be sung in French and runs two hours.

Audience size is limited to fifty seats per show and expected to sell out.