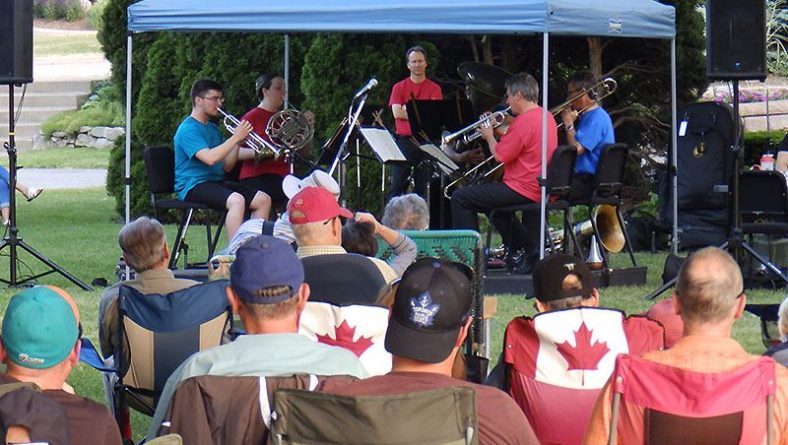 Normally, with a turnout in the hundreds at Windsor Symphony Orchestra’s first free to all outdoor concert of the year, it would be said it was standing room only. But, in this case, the audience brought their own chairs to the event Friday night at Reaume Park.

Making your own seating arrangements is a tradition at the outside concerts. Another is the Symphony bringing its Brass Quintet to the east end park. It has been doing this for a number of years. It is, operations director Faith Scholfield told Eyes On Windsor, a location very much enjoyed by the musicians. 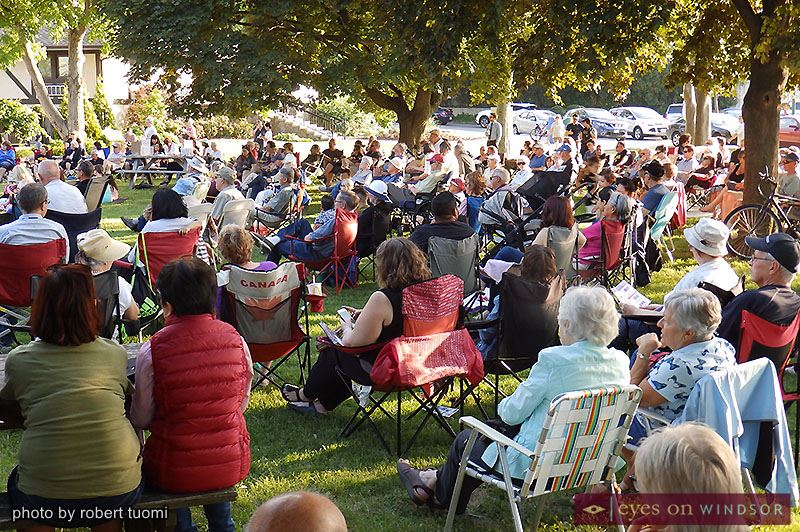 A section of the hundreds on hand for the Windsor Symphony Orchestra’s first free outdoor concert of the year at Reaume Park on June 8, 2018. Photo by Robert Tuomi / Eyes On Windsor.

Much to the delight of the audience, the evening was rich in music variety ranging from Scottish Folk to Ragtime. Listeners were encouraged to sing along to Madrigals from the Renaissance – if they knew the words. Not many did. Apparently there was a shortage of familiarity with 600 year old music.

This certainly changed with W.C. Handy’s famed St. Louis Blues. The Quintet played Luther Henderson’s arrangement of the song which presented a rather interesting set of circumstances. Sections of the song are reminiscent of George Gershwin’s Summertime.

Those who had taken to singing or humming along to what they thought was a well-known Gershwin hit found themselves quickly out of sync with Handy. As the song progressed, he took them down a whole different path.

Known as the “Father of the Blues,” Handy is credited with publishing the world’s first composition of the then new genre. The audience was told he named it after his home town at the time of Memphis. For reasons known only to him, he sold the song’s rights in 1909 for $100.

Obviously the song generated a considerable windfall for its new owner. It was a mistake Handy would not repeat. When he penned St. Louis Blues he kept the publishing rights to himself. 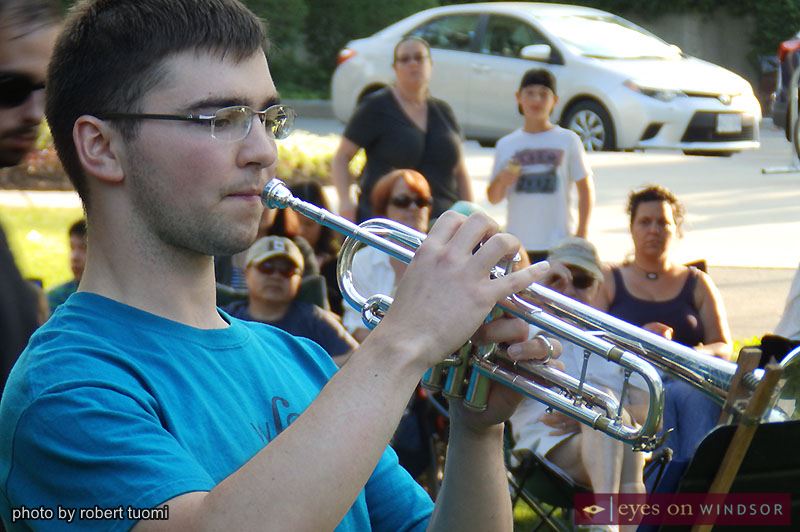 While most of the Quintet’s members were Symphony performers, there was one exception. University of Windsor’s School of Creative Arts student Matthew Lepain was not only invited to join the group but also performed a trumpet solo.

Five more outdoor concerts are lined up. On June 30 the Symphony will bring its full orchestra to Leamington’s Amphitheatre and then on July 14 its Woodwind Quintet will perform at Windsor’s Sculpture Park. This location on the river has the feeling of an amphitheatre as well.

On July 15 the Brass Quintet will set-up at Tecumseh’s Lakewood Park. The series will end with two more Woodwind Quintet performances, at Kingsville’s Mettawas Park on August 4 and then back at Amherstburg’s King’s Navy Yard Park on August 5. Further details can be found on the Symphony’s web site or the Eyes On Windsor event calendar listing for this concert series.

A customer leaves with a cone from the busy Reaume Park ice cream stand, Cooleez Eats & Treats, while others wait their turn before settling in for a night of music. Photo by Robert Tuomi / Eyes On Windsor.