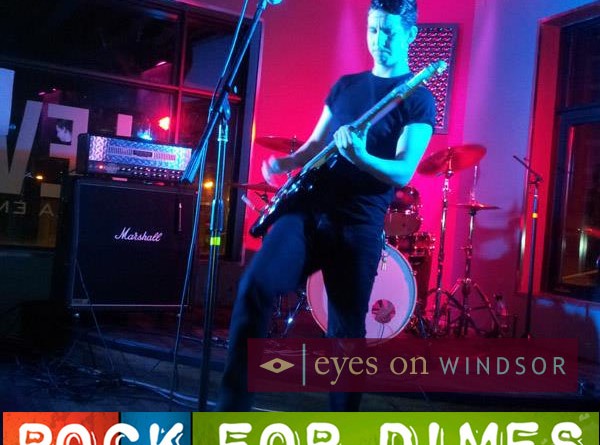 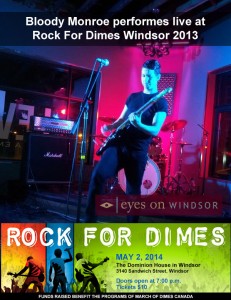 “We are deciding on whether to auction off or sell raffle tickets for the guitar autographed by the band Great Big Sea. The guitar was graciously donated by Caesars Windsor”, says Dennis Ullman. Locals will remember Ullman as the drummer from Windsor’s Icy Redd band. He is currently March of Dimes Canada’s Associate Director for Special Events and Community Relations.

Great Big Sea recently performed to an excited crowd at Caesars Windsor this past November.

Ulman will be one of the guest judges of the local bands that are battling for braging rights to the “Best Band in Windsor”. In addition, several celebrity judges, involved with the music and entertainment industry, will be joining the panel including Tim Trombley (Director of Entertainment at Caesars Windsor), John Gillies ( Film-Maker, photographer and owner of Iron Street Studio in Windsor, Detroit), Terry Moshenberg (Founder of League of Rock), and Jeff Burrows (Drummer for Tea Party).

The competition this year will be even stronger, as the winning band will be invited to perform at Windsor’s Fork and Cork Festival in July, attended by over 20,000 people! One band will also be awarded the League Of Rock’s Summer J.A.B. Session 2014 prize pack that includes full membership and a recording session worth $1098!

The bands that will be rockin it out at The Dominion House in Windsor on May 2, 2014 include 24 Sussex, Kara Kara, BorderCity 5, Red Legacy, Among Titans, and solo artist Dan Reed.

2014 will be the tenth year for Rock for Dimes nationally and the third year in row it has been held in Windsor. This event has become March of Dimes Canada’s flagship national fundraiser and is now held in communities coast to coast. Since its inception, Rock for Dimes has raised over $1,000,000 to support their Stroke Recovery Canada® and Conductive Education® programs.

The evening’s emcee will be Mark Mackenzie, and Mike Kovaliv will be photographing the event.

Long & McQuade and Airgo Mobility are our national sponsors, and the local sponsors include 89X radio, The Dominion House, ReverbNation, Stroke Recovery Canada®, and Eyes on Windsor.

Come out for a great evening and support a great cause at Rock for Dimes Windsor!