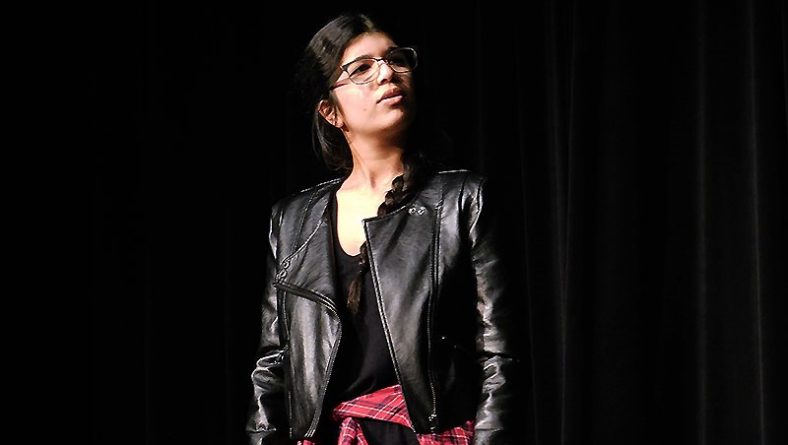 (Zenia Sethna pauses while making a point in a monologue titled Wear/Say part of the Windsor Law presentation of the Vagina Monologues at The Capitol Theatre in Windsor, Ontario, on Feb. 13, 2019. Photo above by Robert Tuomi / Eyes On Windsor.)

It is a show about something, something that is rarely talked about in polite company but does exist. Even if to see it takes a mirror device, which was one of the props used during the presentation of Windsor Law’s Vagina Monologues Wednesday night (Feb. 13) in the Capitol Theatre’s Kelly Theatre. It was one of only a few props used in the play, which largely unfolds on a plain stage with the actors mostly dressed in black. 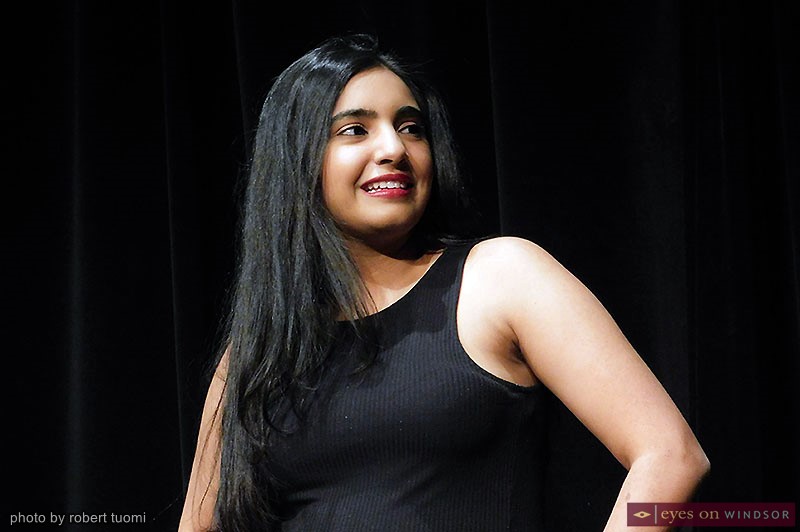 In the Windsor Law presentation of the Vagina Monologues Inderdeep Toor worked with two other students in a segment called Wear/Say at The Capitol Theatre in Windsor, Ontario, on Feb. 13, 2019. Photo by Robert Tuomi / Eyes On Windsor.

All of this talk of vaginas is based on Eve Enslers’ seminal 1996 play based on conversations with women about their private parts. The play has been performed on countless stages around the world and has grown to become more than a theatrical event. It has mushroomed into a global cause, that of ending gendered violence. It is now celebrated on something called V-Day. This is one day a year where women around the world collectively stop to ponder violence against their gender and for University of Windsor law students to raise money for two important causes, the Windsor Essex Sexual Assault Crisis Centre and the V-Day Spotlight Campaign. 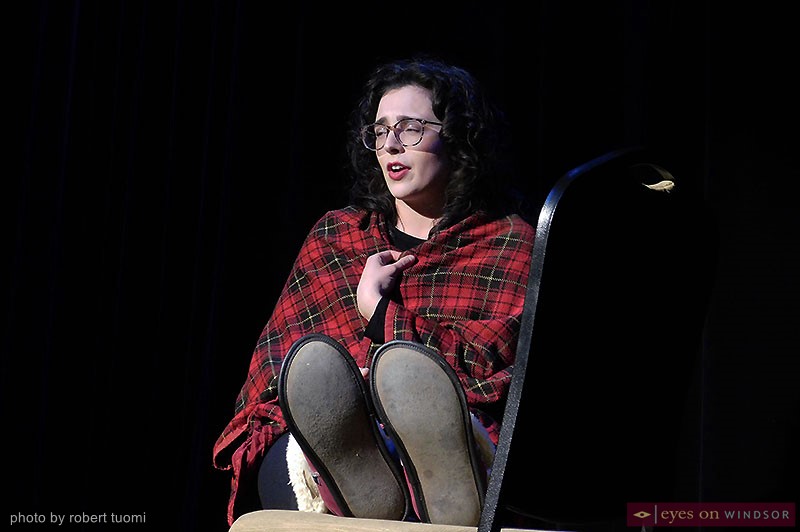 In this monologue, Piper Riley Thompson, a third level law student, takes on the persona of a little old lady who has almost abandoned her vagina in the Windsor Law presentation of the Vagina Monologues at The Capitol Theatre in Windsor, Ontario, on Feb. 13, 2019. Photo by Robert Tuomi / Eyes On Windsor.

While there is much symbolism in the play to support the cause, there is also humour. Apparently, mentioning the area of a woman’s body covered by her unmentionables can be funny. Not only that, but each monologue in itself is unique, expressing the variety of relationships women have with the sensual mid-frontal section of their bodies. One aspect of the care of the vagina almost brought the house down, particularly the way certain products and even clothes are designed to thwart pleasure and comfort down there. 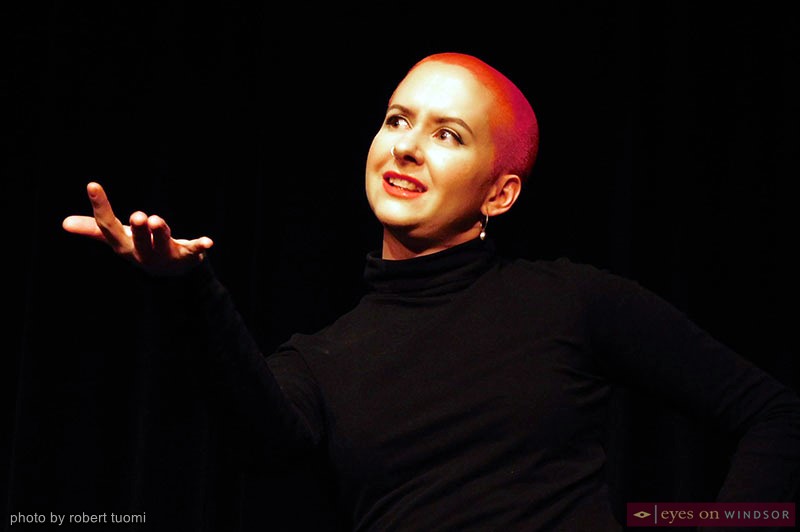 Law student Ilia Sumner expresses a point in the introduction to Windsor Law’s presentation of the Vagina Monologues at The Capitol Theatre in Windsor, Ontario, on Feb. 13, 2019. Photo by Robert Tuomi / Eyes On Windsor.

Although, the thought was somewhat tempered. Releasing vaginas from all their societal imposed constraints, and nice smelling perfumed products, could result in spontaneous orgasms. Yes, sex is often mentioned in the various monologues, but not in a pornographic way and not in an antiseptic way either, although the fact that vagina, the word at least, does sound somewhat like a medical device. 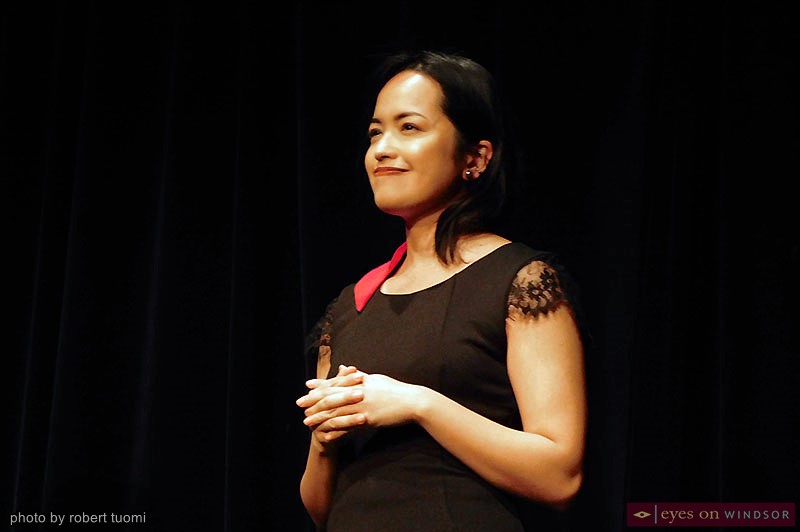 For Ria Macasaet, a second level law student, her participation in 2019’s Vagina Monologues fundraiser, presented by Windsor Law, was her second year of participation in the theatrical event at The Capitol Theatre in Windsor, Ontario, on Feb. 13, 2019. Photo by Robert Tuomi / Eyes On Windsor.

These are all adults after all, and what is most insightful is the relationships some woman have with that area of their body, which, on its own often reflects society suppression. This, of course, makes the play that much more relevant and explains it’s longevity.

A monologue, delivered by second level law student Karly Lyons brought up the prospect of vaginas not exactly being a happy lot. Apparently, they can be downright angry with the life they must live, down there after all. 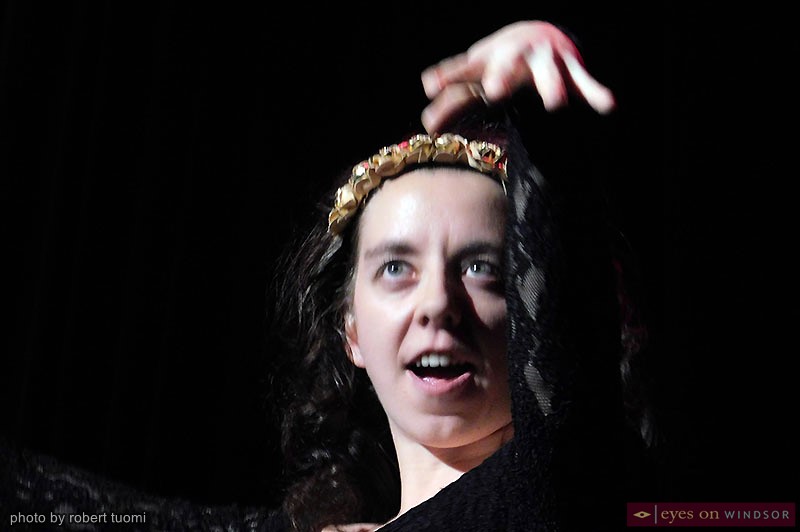 During Windsor Law’s the Vagina Monologues, Karly Lyons, a second level law student, delivered a fiery monologue suggesting vaginas might not be all that happy at The Capitol Theatre in Windsor, Ontario, on Feb. 13, 2019. Photo by Robert Tuomi / Eyes On Windsor.

Windsor’s production is presented by Windsor Law and is a fundraising event. University of Windsor law students read various monologues. In some cases the actors pick a favourite, from about 200. Others, like Bianca Foradori, are assigned theirs. She is completing her final year of the combined Master of Social Work and law degree. She told Eyes On Windsor, about this being her first time on a stage, a situation in which she was more than nervous. It might seem odd for a law student, practiced in the art of arguing before juries and judges to be so nervous. 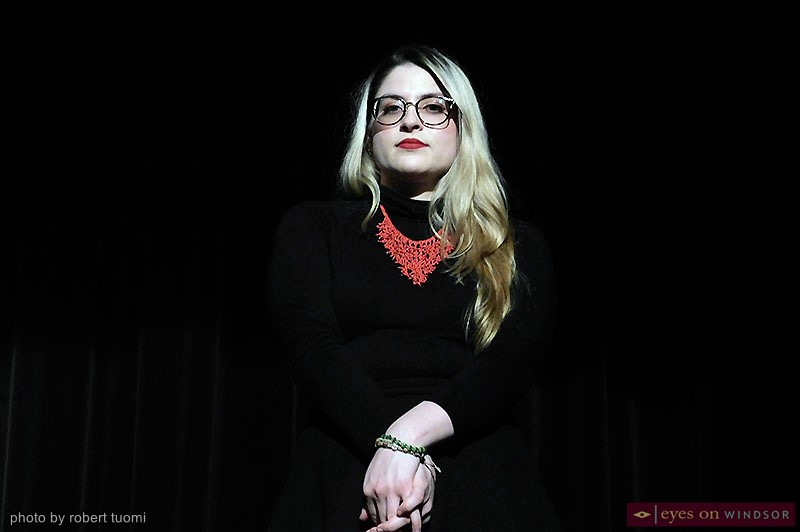 Final year law and social work student Bianca Foradori was involved in two monologues at the Windsor Law presentation of the Vagina Monologues at The Capitol Theatre in Windsor, Ontario, on Feb. 13, 2019. Photo by Robert Tuomi / Eyes On Windsor.

But the reality is, in the courtroom lawyers have their briefs and don’t have to memorize to achieve the precision required to deliver a script properly.

Nonetheless, she, and her fellow students, all did well. Her role including acting two monologues, sharing the stage with two other actors and then four others. In the latter the subject matter was the transgender issue, titled “They Beat the Girl out of my Boy..or so they Tried.”

The majority of the money raised from what has become an annual production of Windsor Law will be used to help finance The Sexual Assault Crisis Centre. It works to provide services to both youth and adults who have been abused.

This year the V-Day Spotlight Campaign has a focus on women in prison and detention centres and formerly incarcerated women. Some of the testimonials were actually written by members of the Windsor-Essex community.