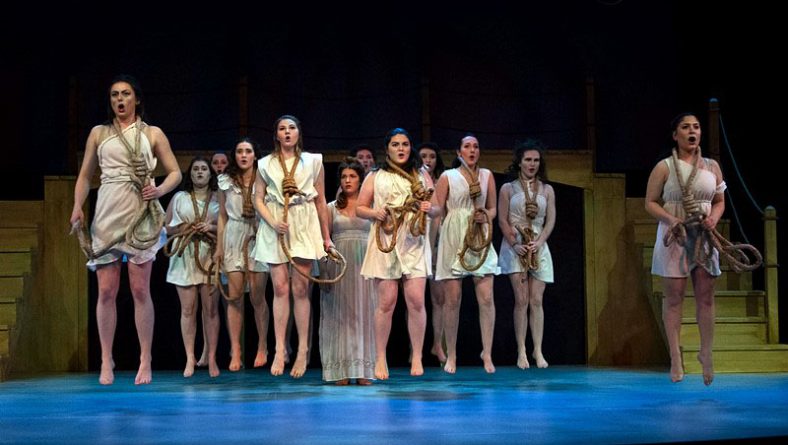 University Players will open the theatrical version of Margaret Atwood’s The Penelopiad, a colourful yet dark Greek mythology based drama, inspired by ancient Greek poet Homer’s post Trojan War themed poem The Odyssey (and in part the poem Iliad which came before it). The Penelopiad recalls the story of King Odysseus, the great Greek hero, who spends 10 years fighting in the Trojan War and another 10 years travelling back home to his wife Penelope. The Penelopiad looks at the story through the eyes of Penelope. The production opens this weekend with performances on February 1, 2, 3, 6, 7, 8, 9, & 10, 2019. 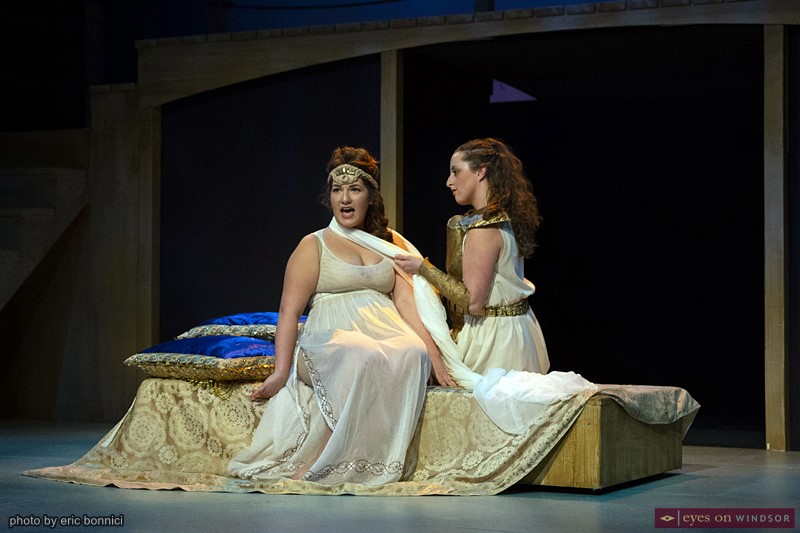 Jacqueline Karabatsos (left) cast as Penelope, and Shayla Hudson, cast as Odysseus, rehearse a scene from University Players Windsor’s production of The Penelopiad on Jan. 29, 2019. Photo by Eric Bonnici / Eyes On Windsor.

Eyes On Windsor was invited to take a sneak peek of some of the scenes while the cast rehearsed last Tuesday (Jan. 29). This production of The Penelopiad is directed by Kelli Fox in her directing debut with University Players. Kelli has been acting for 30 years and began transitioning to directing about 8 years ago, mainly directing more than acting for the past 5 years. Kelli was kind enough to take take the time to speak with us. She says The Penelopiad is already quite challenging for actors, even more so for theatre students who already have a lot of obligations with University life in general. 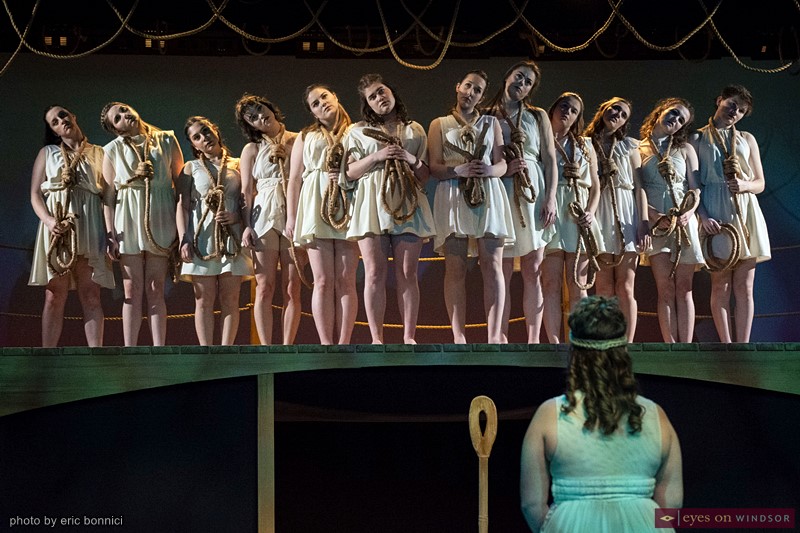 Maids in Univiesity Players Windsor’s production of The Penelopiad shown during rehearsal of a scene where they are hanging with nooses around their neck on Jan. 29, 2019. Photo by Eric Bonnici / Eyes On Windsor.

“These guys have been working their tails off,” says Kelli. “I was in this show seven years ago and I remember how challenging this material was as a performer, it calls on absolutely every piece of you, mentally and emotionally, and technically. So it’s been a lot of fun to watch a bunch of theatre students have a go at it and succeed, so wildly well. They’re doing incredibly well, it’s really tough material and they’re really rising to it.”

Kelli speaks from experience, Fox herself played the role of Odysseus in the Nightwood Theatre production of The Penelopiad, a performance which earned her a Toronto Theatre Critic’s Award and a Dora Mavor Moore award as a part of the ensemble. 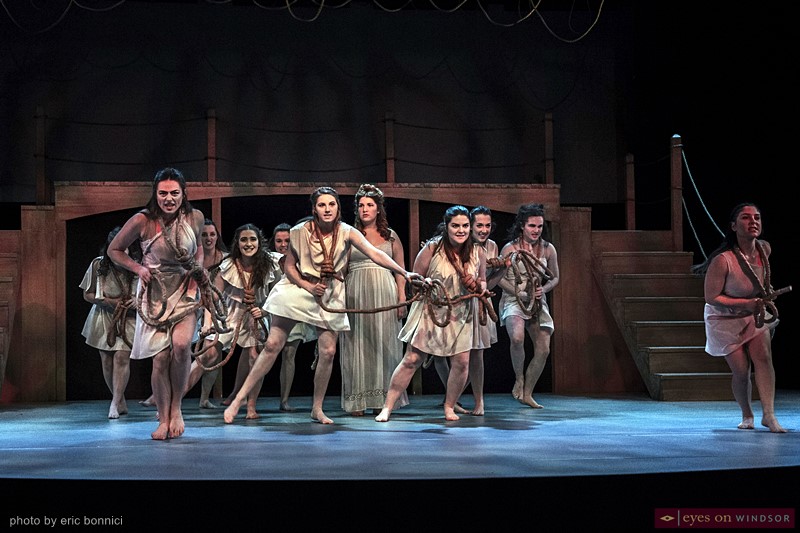 University of Windsor theatre students during a dress rehearsal of UP Windsor’s production of The Penelopiad at Essex Hall Theatre on Jan. 29, 2019. Photo by Eric Bonnici / Eyes On Windsor.

“The Penelopiad covers the same ground as the Odyssey, but it’s really the story of Penelope’s life,” explains Kelli. “It starts with her birth and fast forwards through time up to the point where she is married to Odysseus. It then fast forwards again to where Odysseus goes off to fight the Trojan War, it’s twenty years of him being away and she’s trying to hold down the fort at home (managing the palace, keeping the kingdom in order, and enlisting her servants to keep would be suitors away). We get that whole story of the Odyssey from her point of view. It kind of takes back some of the narrative from Odysseus. There are 12 maids that live in the household that are also trying to take their fair share of the narrative. Famously, in Homer’s story of the Odyssey, the maids are dismissed in about one and half lines of verse. Basically the maids that helped Penelope were all hung (ordered by Odysseus). So this is those 12 maids saying this is some of our story too, they come in and kind of claim it. It’s Margaret Atwood, so it’s witty, it’s really sharp, it moves really quickly, there’s music, and dance, it’s a lot of fun. There’s some really intricate complex choreography.”

Accompanying Kelli from the Nightwood Theatre production of The Penelopiad is choreographer Monica Dottor, who returns to University Players after directing Big Love in the 59th season. Fox’s version of Penelope’s story is beautiful, ethereal and bold, underscored with original music and featuring dramatic movement and dance. 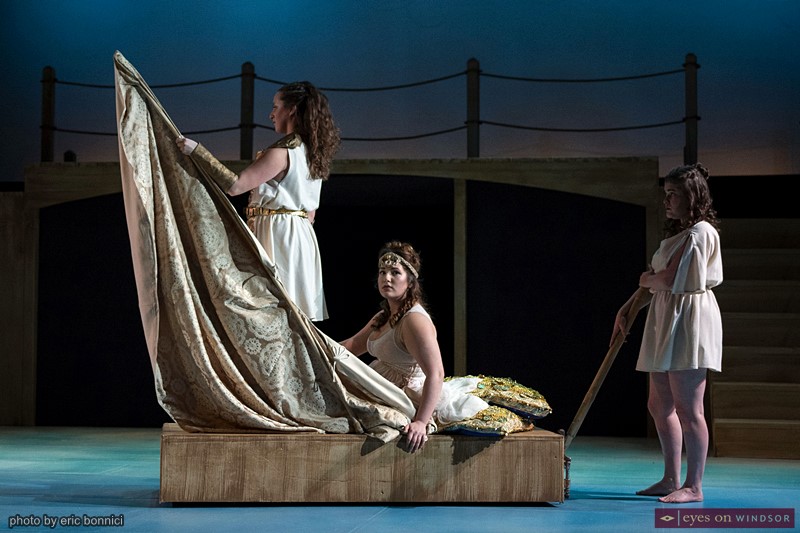 University of Windsor theatre students during a dress rehearsal of UP Windsor’s production of The Penelopiad at Essex Hall Theatre on Jan. 29, 2019. Photo by Eric Bonnici / Eyes On Windsor.

Rehearsal of the second scene of Act I, where the are first introduced to the audience, featured the entire all female 13 member cast on stage. Penelope (played by Jacqueline Karabatsos) was surrounded by her 12 maids (all with nooses around their necks) in an exciting display of fiercly intense choreography, jumping, and singing. The 12 maids also play other characters, such as Shayla Hudson cast as Odysseus. Each scene we saw rehearsed was captivating, giving us a glimpse into what we feel is going to be an amazing production worth experiencing. 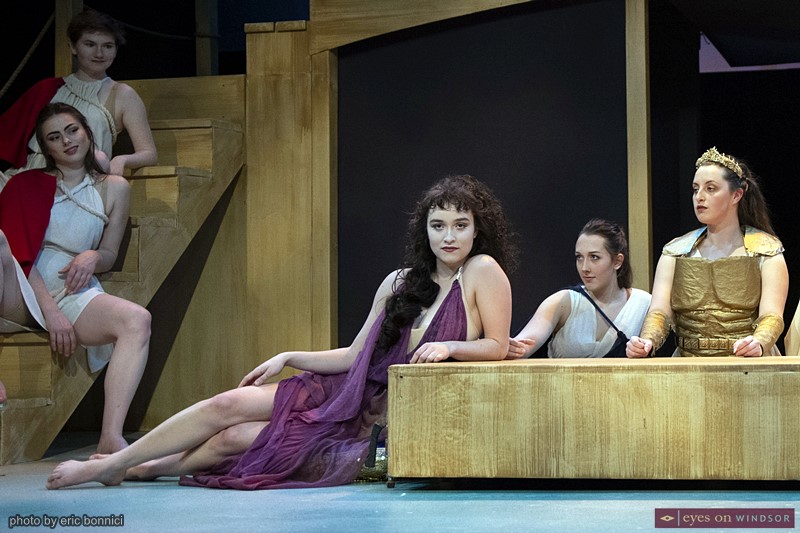 University of Windsor theatre students during a dress rehearsal of UP Windsor’s production of The Penelopiad at Essex Hall Theatre on Jan. 29, 2019. In purple dress, Sofie Jarvis cast as Helen of Troy. Photo by Eric Bonnici / Eyes On Windsor. 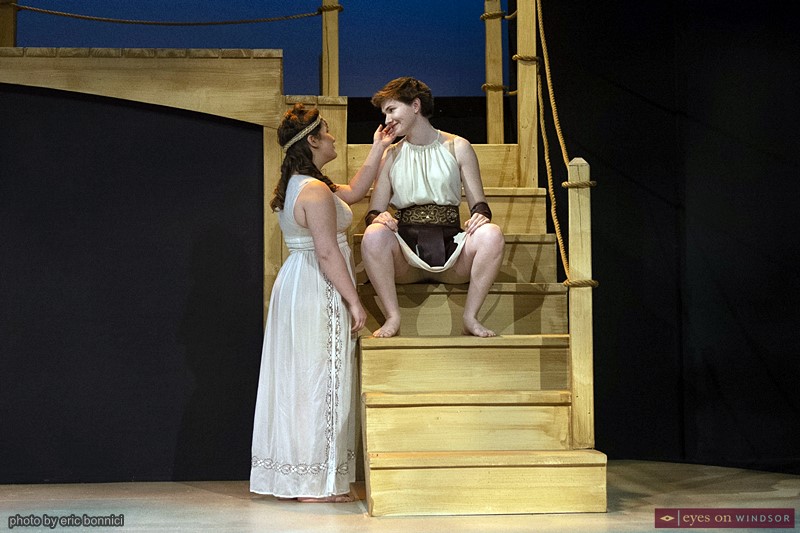 Dress rehearsal of UP Windsor’s production of The Penelopiad, Jacqueline Karabatsos (left) cast as Penelope, and Leah Morris cast as Penelope’s son Telemachus, on Jan. 29, 2019. Photo by Eric Bonnici / Eyes On Windsor 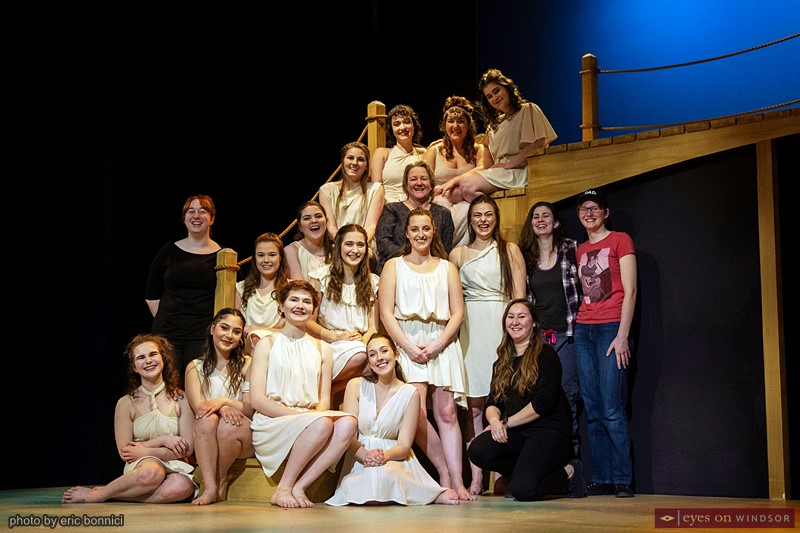 Kelli Fox says, “It’s Margaret Atwood at her dry, witty best, and it takes no prisoners. And it will be a feast for the eyes. There’s a lot to look at that will be constantly surprising the audience.”

All performances from Wednesday to Saturday start at 8 p.m. and Saturday and Sunday matinee performances are at 2 p.m. On Sunday February 3rd, a “Talk Back” discussion with the actors will follow the performance. Tickets start at $8 for students, $19 for seniors and $20 for adults. The show takes place at Essex Hall Theatre, located on the University of Windsor campus on the corner of Wyandotte and Patricia.