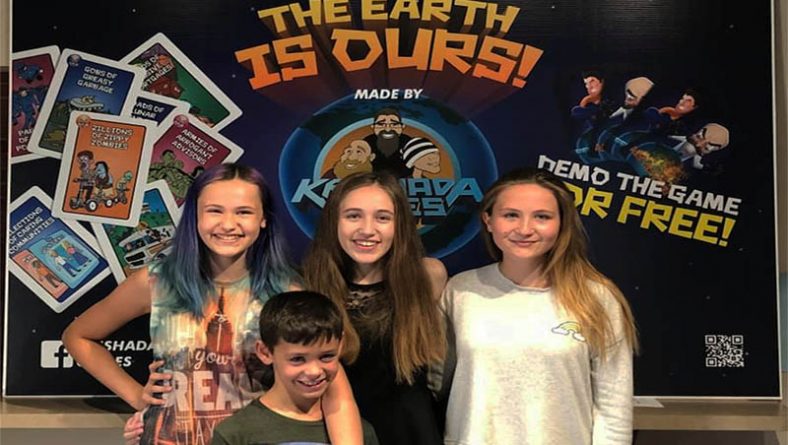 A pair of Windsor tabletop game enthusiasts have teamed up with a local comic book artist, to launch a fun card game called The Earth Is Ours. The trio of Kristopher Marentette, Shaun Murphy, and David Duke makeup Windsor based Krishada Games. The Earth is Ours is a hilarious take on good vs evil where one team tries to destroy the earth while the other fights to save it. The first or several upcoming creations, the game has been in playtest mode for a little over a year, has just launched a kickstarter campaign, and will be free to try and play at Windsor Comicon this weekend.

“We actually have five games in the works, this is the first one we thought of and we’ve put all our energy toward,” local musician and now game creator, Kristopher Marentette, told Eyes On Windsor during an interview.

Kris and Shaun have both been big tabletop gamers since childhood. Shaun religiously plays every week with a large group of friends. The pair were discussing things they like and don’t like about games when they came up with the idea for The Earth is Ours. “We were tossing ideas around, one of the things we thought was really cool was when you had team play,” says Kris. “It’s not just you, it’s a collaborative effort between you and your team, two teams vs each other, and the idea being one team was trying to destroy the earth, and the other team is trying to save the earth, and then it just grew out of that.” 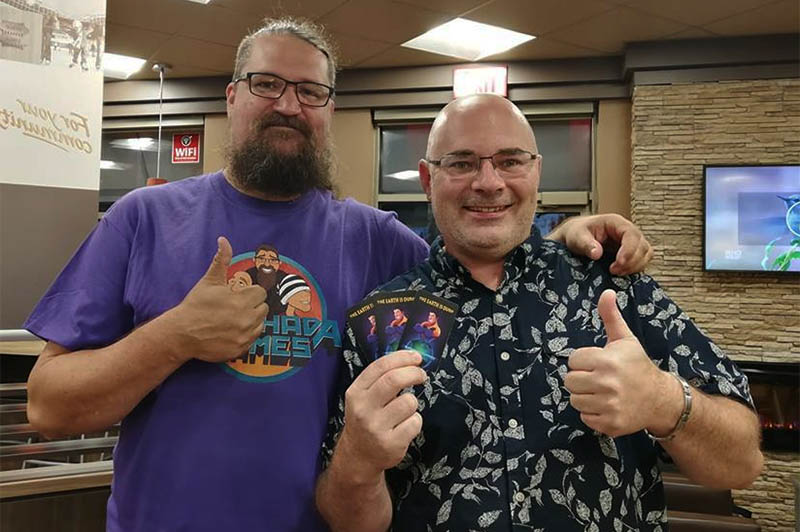 Kristopher Marentette of Krishada Games (left) with Eric Bonnici of Eyes On Windsor during an interview to discuss The Earth is Ours tabletop card game.

To keep the game campy and silly they called the good team Benevolites and the evil team Nefarians. Cards in the deck allow players to affect the earth in different ways; economically, politically, technologically, industrially, or environmentally.

“For example, the good guys can positively affect the economy by playing the piles of pure profit card,’ explained Kris. “The good guys would lay this card as an attempt to further the earth as being good. Then the bad guys, the whole team, has the opportunity to attack this move and remove it from the board. If they have less attacks than the good guys have defends collectively, then it stays and the Benovolites get a point. It just turns into this huge match of people attacking and defending against each other. It gets pretty silly. Each time you complete a category it gives you a piece of either your Doomsday Machine or Survivor Machine and when you’ve completed all five pieces of your machine then you win. And collectively as a group, it’s in the rules, you have to yell out The Earth is Ours!”

The Earth is Ours has been in playtest for a little over a year. “It started out with just index cards, nothing glamourous at all,” says Kris. “Then we met David Duke, he does all the artwork for it, and he was able to match that campy kind of cartoonie style with some crazy illustrations.” David Duke is a graphic designer, illustrator, independent comic book publisher, and has created artwork for comic books including Marvel’s Uncanny X-men.

The fast paced game has been played by people between 10 years old and 70 years old. “We’ve played with as little as two people and as many as ten people” says Kris. “So five per team and one on one. Definitely, the more people you have, the more hilarious it is. One night at The Roma Club in Leamington, we started playing, by the end of the session there was this huge group of people around us. We’ve had people that don’t like card games, don’t like board games, that played it and said this is pretty cool. We’re so excited about it!”

The public is invited to play The Earth Is Ours, free of charge, this weekend at Windsor Comicon taking place at Caesars Windsor on September 29 & 30. “We’re the only game company there, which is cool, that’s where we’re going to have the actual prototype deck, with all of Dave’s almost finished artwork on it,” says Kris.

Kris says that Shaun is enthusiastic about Kickstarter and has bought thousands of dollars worth of games through their tabletop game category. “The amount of tabletop and card games that are being funded through kickstarter right now is crazy,” explains Kris. “It’s their biggest category for funding.” A Kickstarter campaign recently launched to fund the production of The Earth Is Ours. Depending on the amount pledged, supporters have the opportunity to receive copies of the card game and colourful T-Shirts featuring the Benevolites or Nefarians.

For more information about The Earth Is Ours Kickstarter Campaign or to support it visit: https://www.kickstarter.com/projects/423650041/the-earth-is-ours

“We love digital games but there’s something really cool about getting together with a bunch of your friends and playing over a table.” adds Kris. “We want to get people involved because we want to spread the word that it’s a grass roots home grown thing, it’s hands on interactive, it’s not seperating people digitally, it’s actually encouraging people to get together and collaborate.”