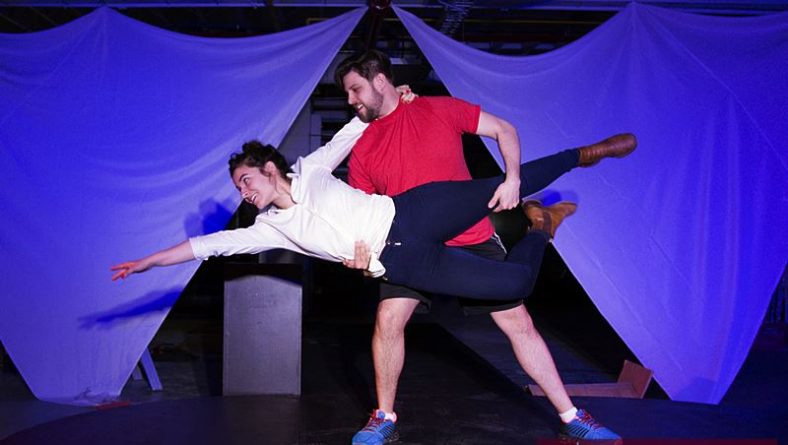 Windsor’s newest performance group, Tall Tale Theatre Co., will draw audiences into their circle for an intimately unique theatre experience, when their inaugural, locally written, romantic drama, “A Bad Man’s World,” opens at Sho Studios on May 10, 2018. The show runs on select dates through May 19.

(Photo above: Kyle Arthur Kimmerly and Somerville Black practice a dance routine during rehearsal for Tall Tale Theatre Co.’s production of A Bad Man’s World at Sho Studios in Walkerville on Wednesday, May 9, 2018. Photo by Eric Bonnici / Eyes On Windsor.)

Tall Tale co-founder, Michael J Krym, cast as main character Cole, wrote the script. Local actor and Tall Tale co-founder, Eric Branget, will direct the show. Eyes On Windsor sat down with Branget, along with cast members Somerville Black who plays Vik, and Kyle Arthur Kimmerly who plays Jeremy, to talk about the theatre group and the upcoming production, during their rehearsal at Sho Art Spirit & Performance’s new Sho Studios on May 9, 2018.

A Bad Man’s World centres around main character, Cole, who is about to take his long awaited steps into adulthood, “he’s taking responsibility for things, he’s trying to get his life in order, he’s trying to remedy his relationship with his best friend (Jeremy), and he’s trying to get back together with longtime girlfriend (Julia played by Shannon Pitre), he really wants to settle down,” explains Branget. “In the midst of it all, his past comes back to haunt him (when Vik shows up with news that changes everything), reminding him that you can’t run away from your past and all actions have consequences.”

Sho Art Spirit & Performance is the official producer and is providing the intimate performance space, in the new Sho Studio adjacent to their current location. An appreciative Branget said, “they’ve been heading the project and they’ve been so accommodating with everything. This space is going to be converted into a hundred seat blackbox, we’re so excited to be the first show in here, and to show off the space a bit.” 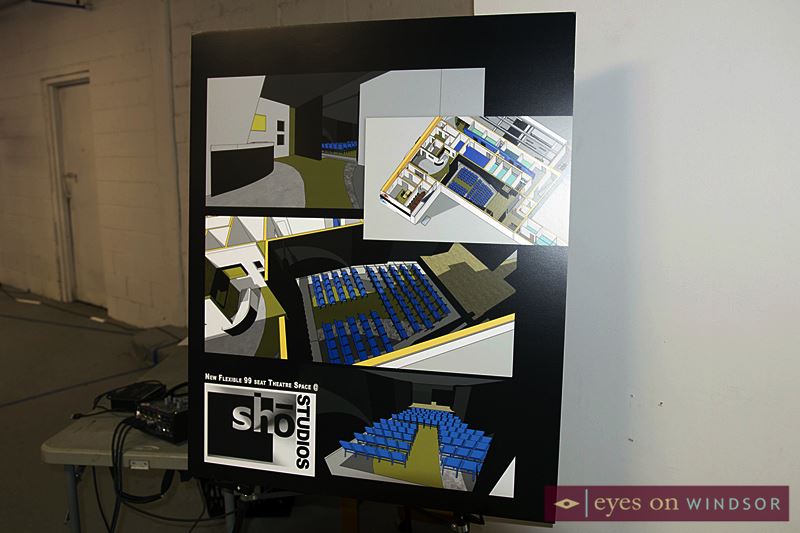 Poster showing the planned design and layout of Sho Studios located at Sho Are Spirit & Performance in Walkerville. Photo by Eric Bonnici / Eyes On Windsor

The play is heavily focused on the characters and the audience will indirectly become part of the cast. The set and props are being kept to a minimum. Cast member Kyle Arthur Kimmerly says, “as far as the set goes, we have the props, that we absolutely need, we have the set pieces that we absolutely need, and the rest is just the four of us on stage talking and dancing, It’s about the conversation and the characters.”

Branget said that everything from character movement and costumes to lighting is solely at the service of the characters. He says, “Michael wrote a great script that’s about the four people in the story. And everything else that I’m trying to do, as a director, is at the service to those four characters.”

Interestingly, this creative group highlighted the intimate small space (which appears to be set up to seat about 40 to 50 people). The stage and, as Branget calls it, “theatre of the almost round’” seating set up, will ultimately bring the audience into the play.

Audience seating for A Bad Man’s World is influenced by Theatre of The Round where the audience is seated in a circle around the stage. Each audience member will have a different view and perspective of the characters based on this set up.

“As the director I’ve been sitting in various seats during show rehearsals, and it offers every audience member a different perspective of the story,” says Branget. “It’s a story of where no one is really the villain, and where no one is really the good person. They’re all people just trying to do the best thing that they think is right. And I think there’s parts in each scene, where someone is going to see a unique beautiful moment that another person did not see, but that other person might see something different. I think it encourages discussion with the audience because based on where you’re sitting, you may have a totally different perspective of the character. It makes the audience more participatory in the live event.”

“That’s what’s great about this space, (with the audience setup) there’s twenty times the stories being told,” added Kimmerly.

Branget says, “the lights are focused on the stage but as an audience member you’re getting hit with some of it, you become a part of the show, you are an actor in the play as well. You connect with the audience so much more.”

“You can’t sit back and let the play do you, for a lack of better words, because you can see the audience member react to the play, everyone is ‘on’ when they’re watching the piece,” added Somerville Black, “it’s an experience.” The script is written so that the characters are trying to convince one another that their arguments are correct while the others are wrong. The audience may tend to side with the character which is physically closer to them during the performance. “Having the audience this close and personal, allows the audience to have a power, a sort of say in this piece of theatre. If Vik’s character is talking to Cole, I have this side of the audience on my side, then Vik’s character has more power and that feeds the actor, which is really interesting.”

Kimmerly enjoys the intimate audience relationship, saying, “they’re part of the story as much as I am. As an actor I prefer to act in this intimate space where I can actually feel the audience’s reactions, as opposed to 1500 seats away, maybe I can hear them laugh.”

Tale Tale Theatre are striving to make people feel something that encourages them to walk away wanting to have a conversation about the character’s dilemmas.

“They kind of become judge, jury, and executioner out here. The great thing about this play is that it’s left open, it’s left for the audience to walk out saying I think what they did was wrong, vs no they did what they had to do,” says Branget. “Audiences are getting such a packed hour of beautiful movement and phenomenal acting, it’s really about the actor and the space this play.” 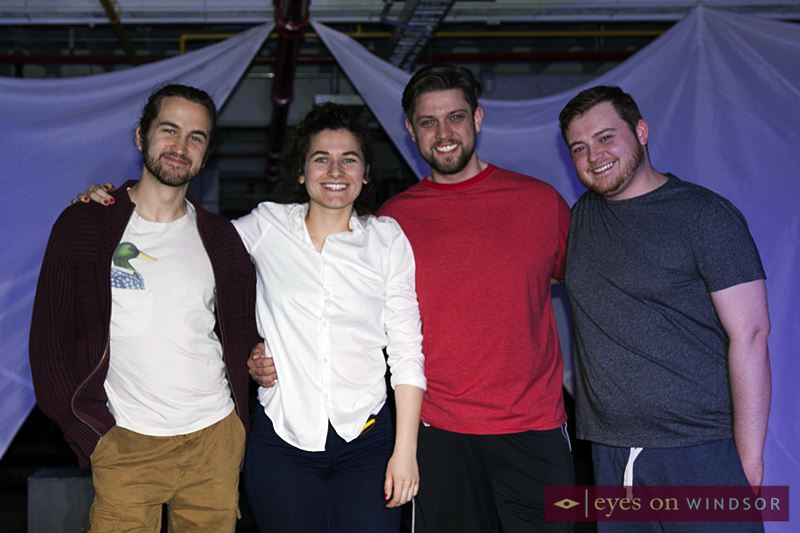 Tall Tale Theatre Co. performers (from left to right) Somerville Black, Kyle Arthur Kimmerly, and Michael J. Krym, with director Eric Branget, during rehearsal for their production of A Bad Man’s World at Sho Studions on May 9, 2018, (missing from this photo is performer Shannon Pitre). Photo by Eric Bonnici / Eyes On Windsor.

Tall Tale Theatre Company is Windsor’s newest theatre company, dedicated to producing exclusively original work,. They “promote locally written plays and those from across Canada. While many talented actors are coming out of the University of Windsor, many head to bigger cities like Toronto, Vancouver, and Montreal, for paid gigs.

“What we wanted to do is, even for a season after they graduate, is to get actors to stay in the city,” says Branget. To accomplish this Tall Tale is a profit share company where. “the actors get an equal split of everything. We’re really dedicated to seeing if we can keep some of that trained disciplined talent in the city. And to help grow the arts community even more.”

“I just graduated from the University of Windsor,” added Black. “Having something to work on right out of graduation and not having to move to Toronto to work a bar job for four months, and then possibly get an acting job, is really comforting and nice. We also have actors who are coming back, like Kyle who has been in Toronto for a while and is coming back to Windsor.“

Kyle graduated from the University of Windsor three years ago and spent the last two acting in Toronto. “For me it’s exciting to get back to Windsor and get back to my theatrical roots,” says Kimmerly. “There’s a lot of talent here, and there’s a lot of really good stuff happening. I know that (Tall Tale Theatre Co.) is a part of that. And to get to work with Somerville who I’ve always respected, and I’m excited to work with Shannon who I’ve known but haven’t really gotten to see before, and Michael I’ve know for a while, Eric I’ve known forever and I’ve always looked up to him. It’s very exciting to come back to work with these people who think that I’m worthy enough to work with them.”

Putting on quality productions with quality talent is an important focus of Tall Tale Theatre Co.

“Three out of five of us, soon to be four, hold degrees in acting,” explains Branget. “Just like an engineer is expected to go into work and execute their job to the highest ability, that’s how we look at this. Our job is to create plays that both entertain and inform, giving the audience something to walk out with. We don’t want to dictate what they feel. And what I think about this play is that it offers a lot of different things to take from.”

The group is excited about the Windsor arts scene and they’re passionate about where it’s heading and being a part of contributing to it. “We’re in this wonderful artistic renaissance in Windsor,” says Branget. “I think all these great companies are popping up and each of them know what they do really well. They’re really dedicated to creating some really great theatre. I think this benefits everyone because there’s that sense of community, artistic sharing, and collaboration, that is beneficial. Everyone also challenges each other, which is great because we are all creating better art together than we would separately.“

In addition to “A Bad Man’s World,” Tale Tale Theatre Co. will be performing, For The Love of Late Night, also written by Michael J Krym. This comedy, a twist on the late night talk show scene, will be performed at Cooper’s Hawk Vineyard on May 26. They’ll then be taking both shows on the road for performances in Toronto.