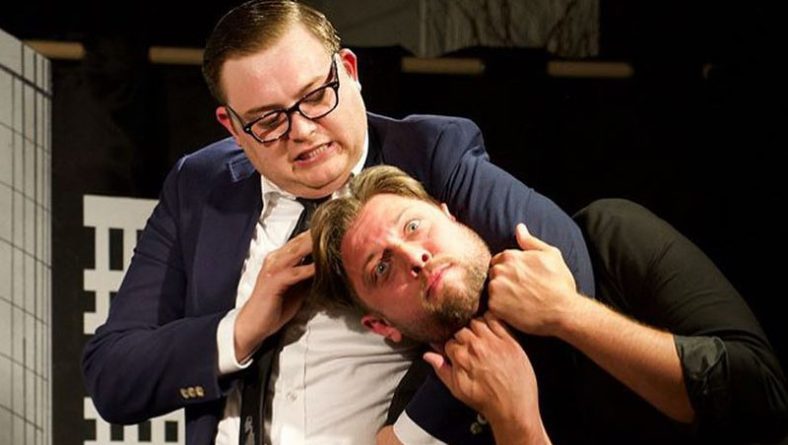 Windsor’s Tall Tale Theatre Co., coming up on their first year anniversary, are producing incredible original plays, showcasing local theatre talent, and incorporating an education aspect into their offerings. Co-founded by Windsor natives Michael J Krym and Eric Branget, the theatre group is hosting their first fundraiser ever this Saturday (March 9) inside the Roth Center for the Performing Arts at Shō Studios.

Eyes On Windsor recently sat down with Eric Branget for an exclusive interview to discuss the upcoming Building Blocks Reception and Performance Fundraiser.

Branget says the public will enjoy a two part event. From 6pm to 7pm the event will feature a reception, food, and a silent auction. Among the silent auction items, as Branget says, “we have hundreds of dollars of theatre tickets, as well as small business vouchers.” Local businesses are supporting the event by donating auction items and in turn Tall Tale is helping give them some well deserved exposure. Branget says local woodworker, Matt Laforet, has donated beautiful live edge drink coasters. Other items include visual art, photography sessions, singing sessions, and acting lessons. Some of the theatre groups donating tickets for their upcoming shows include Windsor Light Theatre, Post Productions, University Players, Korda Artistic Productions, and Lakeshore Academy of Fine Arts.

“It’s just fantastic, I love how much we work together,” explains Branget. “It’s a cool way to share audiences, and train them together to enjoy so many types of theatre. Many companies offer so much variety of theatre, it can really expose the common theatre goer to so much theatre that they wouldn’t have experienced even ten years ago in the city.”

The second part of the fundraiser runs from 7pm to 9pm and will feature three live theatre performances. “All are original pieces created by either former or graduated University of Windsor students, most of them are from Windsor, which is just fantastic,” explains Branget. Each performance features a different style of theatre.

The first show is an original by Kyle Kimmerly, who is a Tall Tale Theatre alumni. He played Dean Marlow in Tall Tale’s production of For The Love of Late Night. “He’s a fantastic guy and he was in my graduating class,” says Branget. “His piece is called Ted Grace. It deals with a same sex couple and one of the members is undergoing a sex change. “It’s the partners coming to terms with what that means for their future. It’s based on a real Windsor couple which is fantastic. That was a part of our character study, so at the end of our fourth year, we have to come up with a one person show that we write, direct, and perform ourselves. That was Kyle’s piece. We asked him to bring it back because it was so heartfelt and clear. It’s a story that’s so relevant to today, especially with today’s atmosphere of accepting who you are and how to move forward with that.”

The second show is called Icarus by Arrowwood Theatre Company. Branget says, “this is an original movement piece.” It explores this classic Greek story, giving it a twist, though movement, sound and contact improvisation. “It is composed entirely of current University of Windsor students. They’re all in third year right now and they’re actually going to take their piece to the Toronto Fringe in the summer.” The five actors, Kiera Publicover, Simone Matheson, Cullen MacNaughton, Kyra Scarlett, and Hayden Lyle, as Branget says, “will be using their bodies to create these incredible shapes and structures to tell the story of the fall of Icarus.” The students are excited to perform in front of the audience and see their response. “It will be a little taste of the University that the city doesn’t always get to experience.”

The final production is Life of Len, a one man show Branget originally created for his character study project while attending the University of Windsor. The piece was originally 20 minutes long but has been revamped with additional scenes and three original songs and now runs about 45 minutes. “It tells the story of real life Windsor resident, Len,” explains Branget. “It follows the great chapters of life, it explores brotherhood throughout life and the connection family and dreams can have. It’s a memory based play that shows the beauty of everyday life.”

Branget co-wrote the songs with Andrew Iles, currently in Stratford, who is known locally in the music scene as a band member of The Brandy Alexanders and The Wanderlust Club. Iles directed the 2017 Windsor Walkerville Fringe Fest edition of Life of Len in which Branget performed. The play won the Fringe Festival’s Audience Choice Award and Spirit of Fringe Award. “It seemed to be well received and I’m really excited to bring it back to the city,” says Branget.

Tall Tale Theatre Co. has recently expanded with the addition of two new board members. In addition to Krym and Eric Branget, Sam Lillian (Administrative Director / Educational Director), and Averey Meloche (Operations Director) have joined the team. Together the team at Tall Tale will be striving to enrich Windsor’s theatre community through performance and education.

“Michael is still working with us as an artistic collaborator, but he may be moving out of Windsor pursuing other things,” explains Branget. “Sam and Avery are both local performers. Avery is a UofW BFA graduate, and Sam graduated from the drama and education program. So that really plays off of the education and performance side that’s so important to us. So Sam has been so helpful to us, constructing lessons and making the plays relatable and practical from an education side of things. Avery is a really great performer and he specializes in movement. So his movement skills are really unparalleled in this city, he’s awesome.”

In addition, Branget and Krym are each writing productions with an educational message within them aimed at high school and grade school students. Branget’s piece aimed at younger kids is called Caught In The Net. “It’s a theatre for young audiences show about the anxieties that youth face today. I think it’s only gotten worse, I remember as a kid being stressed out, feeling like I had to grow up really quick and have everything planned. From grade school, to high school, to university, to out. It’s about a kid on the transition from grade school to high school and those anxieties about growing up that come with that.”

Krym’s piece is called Behind Closed Doors is Romeo and Juliet type story with a focus on relationship dynamics among high school students. “it explores themes like assault, and male female interaction, and emotional manipulation,” says Branget.

Once the productions are complete Tall Tale hopes to pitch them to local school boards and have their students come out to the performances. Branget says the goal is to, “reach out to kids who are experiencing these things, so they might be able to connect with these characters.”

The Tall Tale Theatre Building Blocks Reception and Performance Fundraiser will help fund the educational programs and upcoming productions. The event takes place at the Roth Center for the Performing Arts at Shō Studios on March 9, 2019.

Tickets are $30 each ($15 for students) and will be available for purchase at the door on the night of the event. Advance tickets can be purchased online through Eventbrite.ca