It’s 1930 and some of Canada’s elite are partying like its 1929. Unfortunately, and despite the polished shoes of those in evening wear, outside life on the streets is more a walk in scuffed shoes. The country has entered a gut wrenching economic Depression. Things are not well. Moving from glamour to desperation is the challenge Director Katherine Kaszas meticulously solves in St. Clair College’s Performing Arts Department’s musical Merry Christmas 1930’s now playing at downtown’s Chrysler Theatre.

Opening on the set of a live radio program, an entertainment staple of the then jazz age, the audience is wowed with brilliant production numbers involving a cast sometimes with more than three dozen actors and an almost full orchestra of twelve members playing a range of instruments. 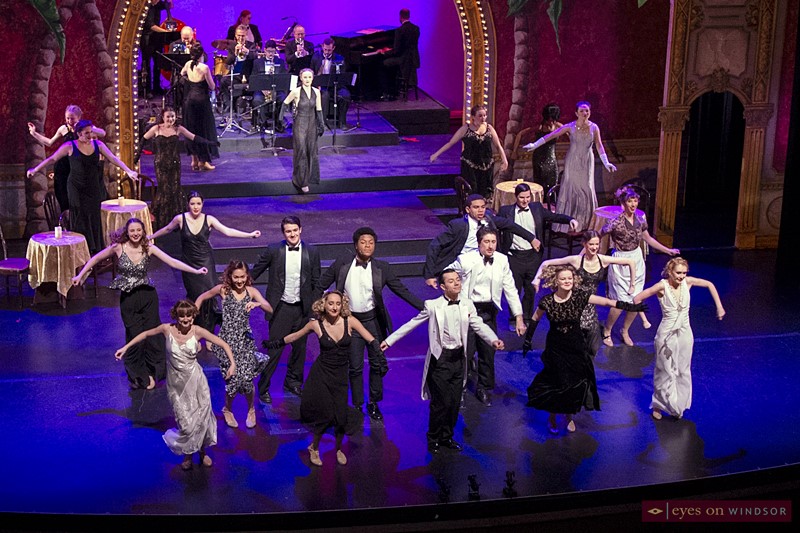 Orchestrating the pronounced visual differences between warm and fashionably-dressed radio stars and the cold and destitute street people is the clever work of costume designer Agatha Knelson. Her clothing styles accentuate the desperation of the not-so-well-off. As the audience is told, “times were tough, yeah, times were dirty.” 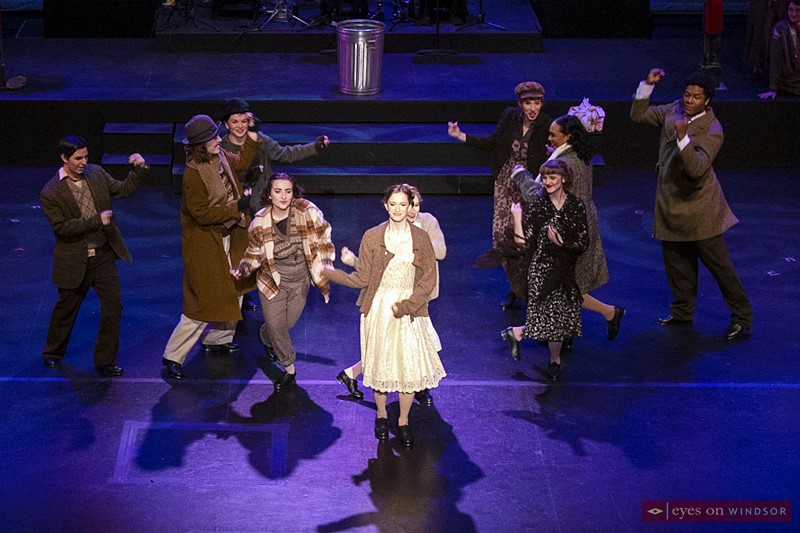 Not ignoring those outside, the party people collect blankets and personally cover the outsiders while the audience is subjected to tweaks of some popular songs, of the times, altered slightly to create new Christmas standards. A prime example takes the large cast to an Eaton’s store. The now defunct national retailer did okay back in the 30’s. To celebrate shopping in the store, Irving Berlin’s Cheek to Cheek becomes Shopping Cheek to Cheek. 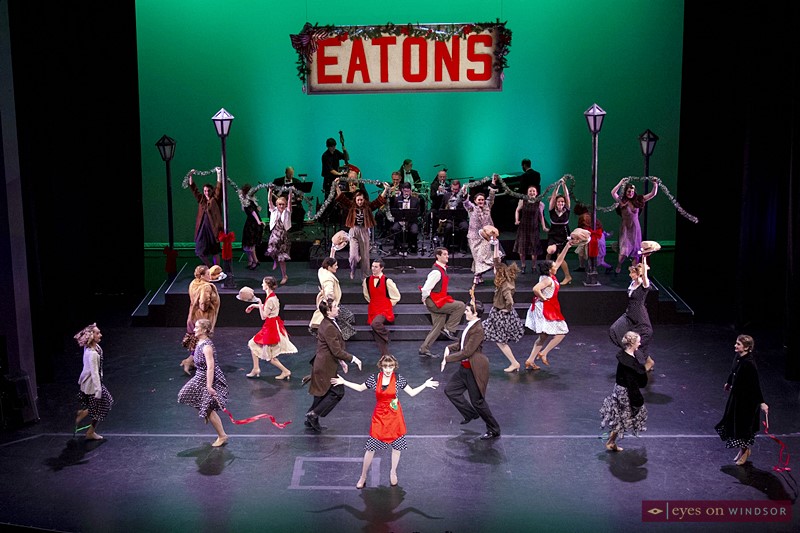 St. Clair College Performing Arts students take on a musical number in an Eaton’s shopping centre set during their production of Merry Christmas 1930s at The Chrysler Theatre on Thur, Dec. 13, 2018. Photo by Eric Bonnici / Eyes On Windsor.

Unifying the music is an underlying skat like sound highly reminiscent of famed 1930’s bandleader Cab Calloway particularly his Keep That Hi-De-Hi in Your Soul. It is the kind of foot tapping music that is delightful to listen to. Further down the list of songs, there are 19 in total, the band actually plays Calloway’s number one hit, Minnie the Moocher, in its original form.

Keeping such a large cast of different talents on cue and running around – and there is a lot of running – without them running into each other is a significant accomplishment. Add to this the fact that the audience is watching students at different levels of training. 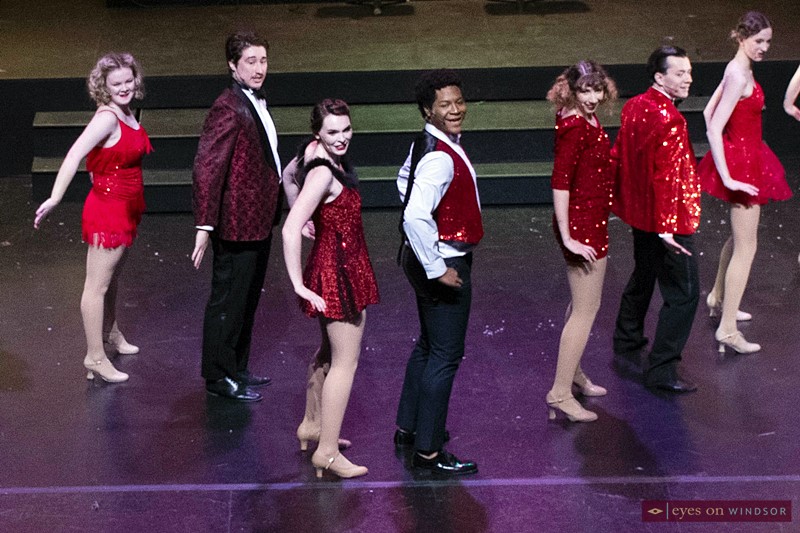 Student Faith Farnham told Eyes on Windsor, getting the actors, with their different stage experiences, to perform irrespective of their training was a major challenge. It was worked out over some three months of practice. Farnham, who performed without a hitch is already planning her next move. Toronto is in her sights. Once graduation is done next spring, the thirteenth graduating class for the program, she plans to join the Queen City’s talent roster and seek auditions and might even wander down to Stratford to try for a classic part or two. Classmate Aubrey Therrien is contemplating examining singing and dancing opportunities on cruise liners. 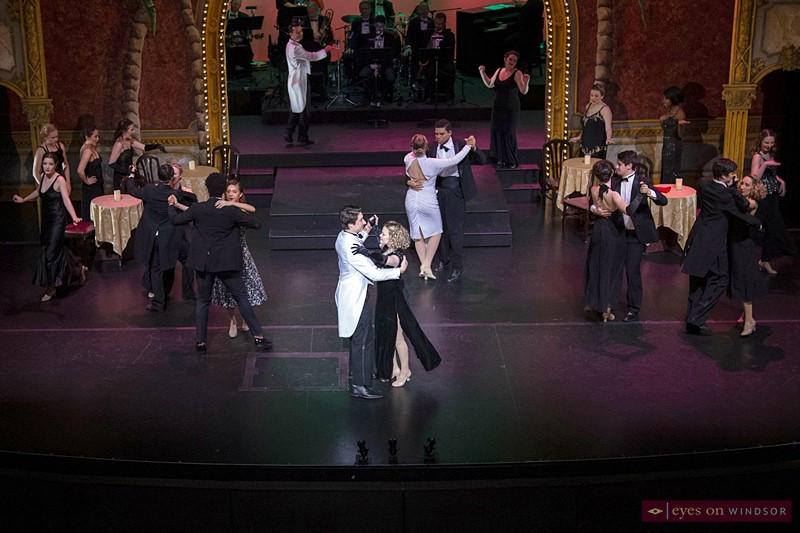 Judging by the flawless nature of the performance of all cast members, Toronto and cruise ship talent directors should be prepared to expect some very new and very promising talent on their doorsteps. And for those who wondered about tap dancing, it was there, as it should be. A number of the actors were able to show off some pretty fancy footwork. It turns out the early 1930’s while being nothing less than the golden age of jazz was also the equally golden age of tap and the hard work of the students was very evident.

While the musical opens in the 1930’s it moves forward, transitioning to the disco era with an almost 40 voice choir with incredible renditions of O Holy Night (Silent Night) and This Christmastide. After that, the orchestra’s upright bass player Ryan Fontaine becomes notably busier with the cast doing rousing renditions of Stevie Wonder’s Sir Duke and December based on Earth Wind and Fire’s September. 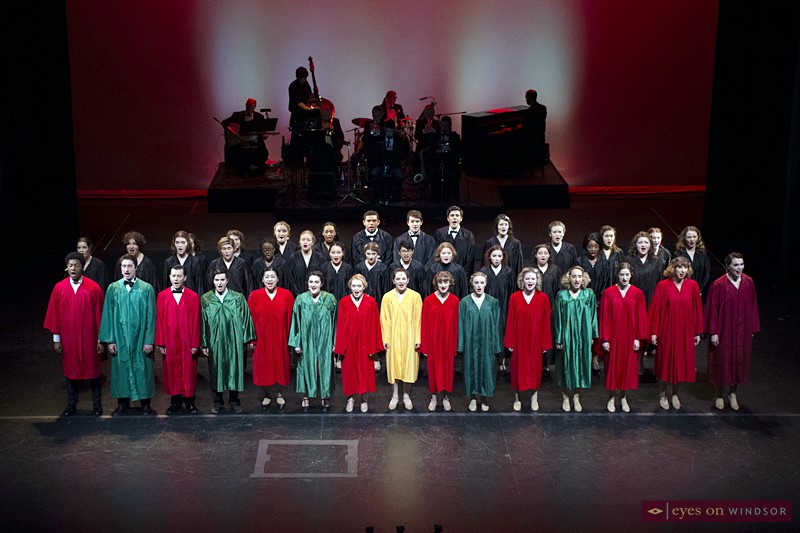 St. Clair College Performing Silent Night acapella as part of their production of Merry Christmas 1930s at The Chrysler Theatre on Thur, Dec. 13, 2018. Photo by Eric Bonnici / Eyes On Windsor.

It is a fitting finale to a very memorable night. “Each year a professional creative team works with the third year music theatre performance students to devise a production from the ground-up,” says Kaszas. Merry Christmas 1930’s adds, “a festive spin to some of the greatest hits of the jazz age, as well as some beloved holiday favourites, to create extravagant production numbers and choral favourites.” 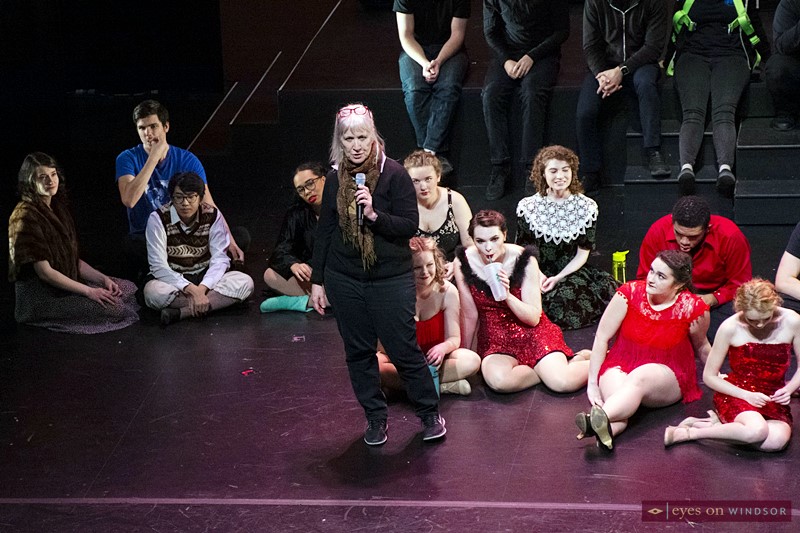 Lighting, sound and sets were painstakingly put together by St. Clair’s Entertainment Technology students, led by Production Manager Dan Rehel. The many dance numbers were choreographed by renowned faculty members Kristyn Wiklanski and Melissa Williams, no easy task given a stage filled with dancers.

Although the 1930’s were economically challenged, it still produced lasting music expertly arranged by Music Director Mike Karloff who also conducted the orchestra and played the piano.

Additional performances are set for December 14 at 7:30pm and a December 15 Matinee at 2pm. Tickets are $20 for adults, $10 for students. For more information visit the Merry Christmas 1930s A St. Clair Christmas event page.