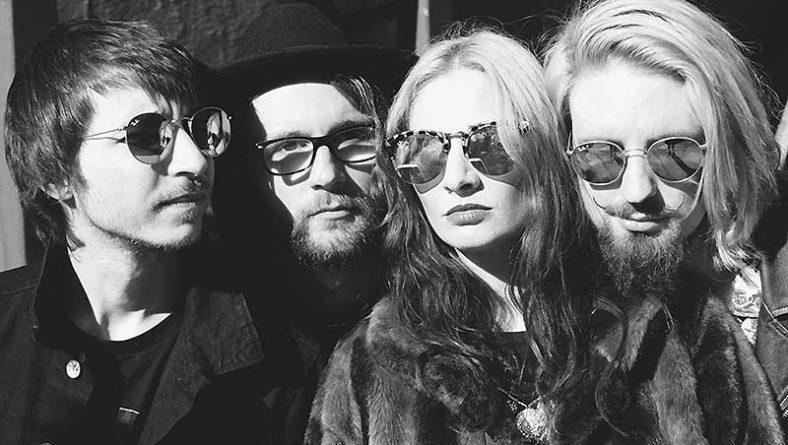 Solhounds, Winnipeg’s heavy-metal grunge punk rockers fronted by female vocalist Elise Roller, will perform live in Windsor for the first time as part of their 2018 Eastern Canada double debut track release tour. The band will bring their unique unapologetic brand of gritty, gut-ripping, stoner rock, and message of equality, empowerment and support for the feminist movement to Phog Lounge on Saturday, March 24, 2018.

Eyes On Windsor had the opportunity to interview the band’s vocalist.

Elise Roller tells us that the band’s “live performance is fierce and action-packed, it’ll make you drop your phone, dig into the old, angsty feelings you thought you left behind, raise your devil horns, and head bang at all things corporate, and unjust. They (Windsor fans) will hear the songs we just released as well as others that we plan to release in the future.”

While female vocalists are minorities in the punk rock genre, Elise has taken advantage of the current women’s rights movement by combining her powerful vocals, grimy wails, and message of empowerment to get noticed.

“Being a female vocalist in a genre that is primarily dominated by men is actually a great place to be in right now because people are actually paying attention,” states Elise. Being a female vocalist absolutely supports our message of equality and empowerment. As young girls, we’re often raised to think that ladylike means being small, subdued, soft-spoken, and polite. That’s always been a very tough bar for me to reach as it’s completely not in my character. When I’m on stage, I’m taking up space, I’m being loud, and I’m unapologetically telling it exactly how it is. My mother would be mortified. But I don’t care – this is me. I should be able to sing about my vagina the same way men have been singing about their dicks for the last century. I am not doing anything different than any man in my position would be, it’s just shocking to some because it doesn’t fit in that weird realm of what they consider ladylike.”

Solhounds first two releases, Body Bandit and Be A Man (I Taught Him), are explosive, unleashing a firey fierce message of female empowerment. We asked Elise what these songs are about:

“This song is written from the perspective of the world’s most prolific woman serial killer, Countess Elizabeth Bathory, a Hungarian noble from the 1500s who is said to have murdered over 600 people in her time. Legend has it, she bathed in the blood of virgins to keep her looking young. It’s saddening to think that women, for so long, have felt such extreme pressures to stay beautiful – whether it means spending “six hundred and something” on make-up, to starving themselves, to getting plastic surgery, to… well, murdering people? But, like many of my songs, there’s actually a second meaning which I wrote to represent the perspective of a woman who enjoys the adventures and the fulfilment of sex and multiple partners. We’re still battling that notion that men deserve a trophy for every woman he’s been with, while women who find the same enjoyment are pegged as dirty and slutty. Again, we’re not doing anything different than what men have been for thousands of years – people are still getting used to our freedom, though, and that makes them feel uncomfortable with the idea.”

“I call this song my break-up song because there are too many sad ones out there and people should feel empowered when they walk away from a relationship at the right time. This song is really about celebrating what you’ve done for someone. It doesn’t pertain to any one guy I’ve dated but, being a single mom, anyone who comes into my life romantically has to “grow the fuck up” very fast. I also have a son who I’m teaching not just to be the man he wants to be, but to be a good human. At the end of the day, women have helping boys grow up for all of existence – whether it’s their sons, their brothers, their boyfriends, or even their fathers. Behind every great man, you know there’s some badass female who whipped him into shape.”

Solhounds have an additional five songs already recorded but have not decided when or how they will be released yet. In addition, Elise states, “we’ve got another dozen songs in our back pocket that we play at our shows, just waiting to be recorded. We’ll be spending the fall and winter writing a lot more. We do hope to get the support and the funds to successfully release a full length record in the Fall of 2019.”

“Releasing only two tracks was a bit of an experiment given our current culture of digital streaming platforms and the fact that all you really need is one or two great singles. We’re gonna work the shit out of these two songs for the next little while and see what comes of it before making any solid decisions (on releasing the other tracks).”

Solhound members are Elise Roller (vocals), Ian Clements (drums), Morgan Davis (bass), Andrew Bontey (guitar) and new member Brett Hesford (guitar). As a side note, Solhounds will only be touring as a four-piece with their new guitarist, Brett, this time round.

When asked how the band came up with their name, Elise replied, “We wanted a name that describes the fire and animalistic energy we bring to our music. Sundogs came to mind but seemed too atmospheric, not hard enough, too common, thus, it became Solhounds.”

The show at Phog Lounge will be the band’s first trip to Windsor and they’re excited to visit and meet the people in the community. “We’re really excited to get out there early for the day and explore. Come meet us! We love people, we love making connections, and we will most definitely be coming back two or three times a year so it would be great to make some new pals in Windsor.”

For those who want to experience the unique heavy hitting sounds of Solhounds and maybe even gain some new friends then Phog Lounge is the place to be on Saturday, March 24th.