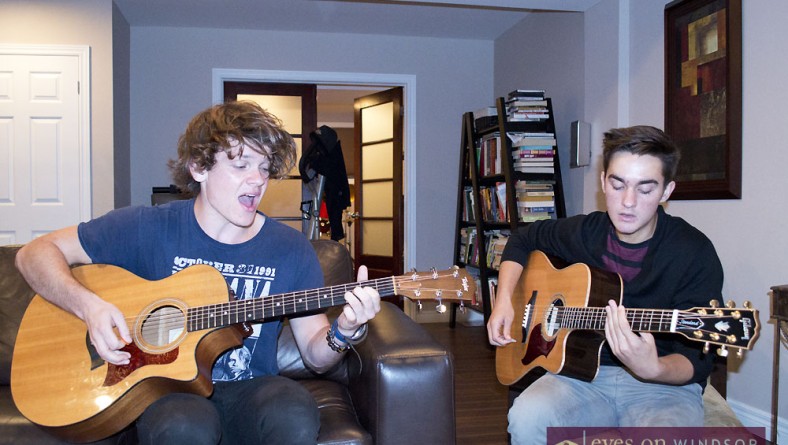 SieraSlave formed in July 2014 and will be releasing their premier 5 original song EP currently being recorded at SLR Studio at their CD release concert tentatively set for December 14, 2014. The band made up of Dane Roberts (guitar/vocal), Nathan McNevin (guitar/vocal), Siera Simoni (drums) and Shaun Miller (bass) will perform at Phog Phest 6 on the Phog Lounge Stage on September 13, 2014 from 4pm-4:40pm.

The bands first few months together has been progressing “pretty well,” says Roberts. McNevin explains, “we’re playing Phog Phest so that’s probably a good sign, we have a CD release show in December, and we play some covers but are focusing on putting a good set of originals out there. Dane and I both write about 50/50 of our original songs.”

Having two song writers in the band has been a great experience for the pair. “It’s fun and different collaborating with someone else, usually I would sit in my room playing my guitar and try to figure things out by myself but now it’s a different experience and a good time,” says McNevin.

Prior to SiereaSlave Roberts was in Twisted Logic along with current drummer Siera Simoni. Roberts says, “we decided to take a break from the band because our lead man was starting University and heading out of town.”

Bassist Shaun Miller was brought into the band in part because Simoni knew him and his talents for a while.

McNevin was in three other bands including 24 Sussex, and Octomen. McNevin describes Octomen as a “weird kind of corny metal instrumental band. SieraSlave is definitely a step up from that,” he says.

Since forming in July SieraSlave has performed four times including shows at the Leamington Sunrise Tomato Festival, Sturgeon Woods, The Coach and Horses, and the Annual Uptown Leamington Sidewalk Sale.

Their next show happens on September 13, 2014 at Phog Phest. The band is preparing to peform at this highly anticipated local music festival like it’s just another show but are aware of and appreciate the significance of it. “It’s like playing any other show except there is a sense of community with other local bands. I played it once before and it’s a different experience, it’s competitive fun too because bands playing at the same time compete with each other for the audiences’ attention,” says McNevin.

Last year while McNevin was just 15 years old he played Phog Phest while in the band 24 Sussex. SiereaSlave’s co-manager David McNevin emphazises that “Tom Lucier (organizer of Phog Phest) is a big supporter of the local music scene, one of the things that impressed me about him is that he is really willing to take a chance on new bands. When 24 Sussex first played there they were just a bunch of 15 year old kids at the time and Tom took a chance on them. Now he’s doing the same with SieraSlave, he doesn’t know them from Adam but is willing to take that risk.”

In response to this statement Tom Lucier said, “It’s obvious to me that new blood is actually paramount to anything in this scene moving forward. If there wasn’t new music coming into the scene it dies out after everybody turns thirty five and has kids but these bands that are young, it’s like last year they weren’t bands long enough really for me to book them. Now there’s several that aren’t just OK, they’re incredible, they’ve be around 18 months or less and they are absolutely phenomenal talent! So it’s not necessarily giving bands a chance, they’re already good, it’s their achievement. I’m just there putting them on a stage so they can play to a bigger audience and its one big happy family. I love having the new blood and everybody gets invigorated by hearing something new. That’s the whole point. So I’m happy to have all the younger bands.”

SieraSlave will open their performance at Phog Phest 2014 with their cover version of fan favourite Purple Haze by Jimi Hendrix. “Between that and a final cover song we’ll be playing 7 original songs,” says Roberts.

Attendees at Phog Phest will enjoy SieraSlave’s rock style with a blend of pop and heavy guitar riffs mixed in.

SieraSlave take the stage at Phog Loung at 4pm.

Nathan McNevin says, “support local music, come see us and the other bands at Phog Phest.”

The bands CD release show is tentatively set for December 14, 2014. In addition, upcoming shows include The Coach and Horses on September 26, and Milk Coffee Bar on October 17.

Details about Phog Phest 6 can be found at http://phoglounge.com/