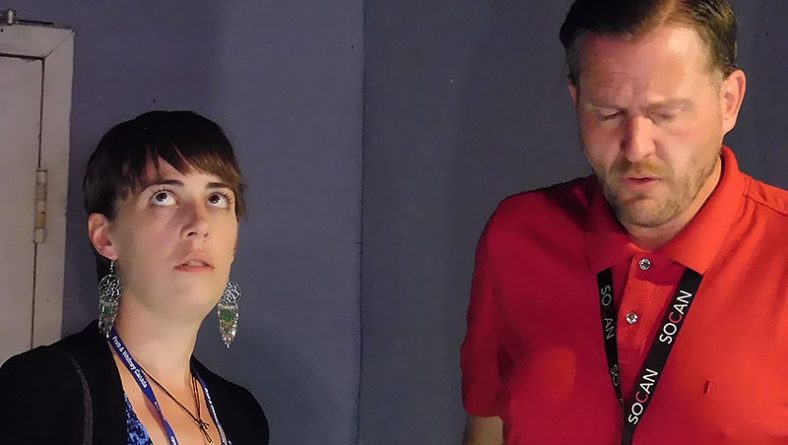 (Tension is immediate when Fay Lynn’s character, a liberal, and Michael K. Potter’s character, a conservative are stuck in a safe room, although, that is not what the play, Shelter In Place, is really about. Photo above by Robert Tuomi / Eyes On Windsor.)

Two employees who find themselves in a safe room of a large corporate tower, with no idea why, would seem like a pretty simple concept. But not if Matthew St. Amand is behind the writing. This is the fifth play to be produced by the local playwright. Without question, he has pulled off one of the most surprising of endings this year in local theatre. 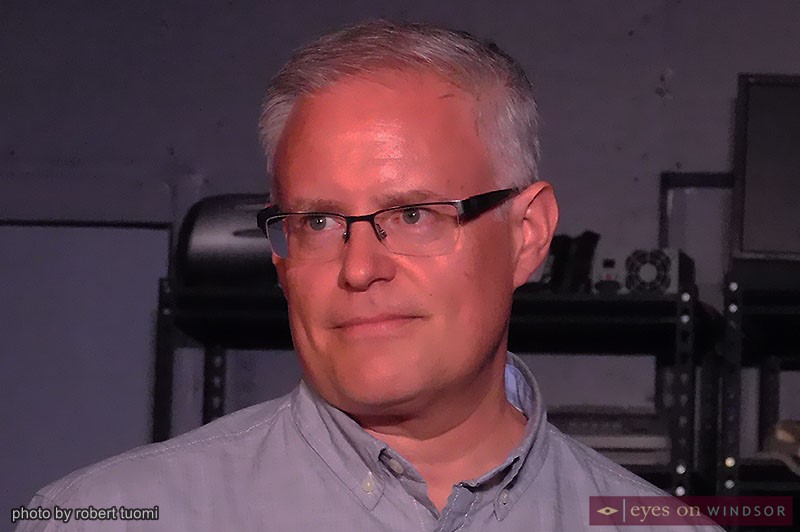 Matthew St. Amand at Shadowbox Theatre in Windsor, Ontario, during opening night of Shelter In Place on July 20, 2018. The play was written by St. Amand and is his fifth produced play. Photo by Robert Tuomi / Eyes On Windsor.

Despite all the clues as the play progresses, the audience is too focused on the conflict between Fay Lynn’s character Meghan, a small “l” liberal, and Michael K. Potter’s Reinhart, a small “c” conservative. Both try to figure out the nature of an emergency which, by corporate rules, has them shelter in place in what, for all intents, seems like a storage room. But, it, says a condescending Reinhart, is the right place. He knows where he was sent.

All the while menacing sounds, catastrophic in nature, are heard in the background and then later the stomping of military boots. Why the wearers are in the building is the first surprise, more are to come.

Meghan, the “snowflake,” as Reinhart calls her, is a member of the company’s wellness unit, while he, a conservative gamer, is with the logistics and risk management unit. Reinhart throwing such an insult with such ease at Meghan suggests there is more than a little conflict going on between them.

Superficially, it somewhat resembles the stuff posted daily on social media, of real Liberal zealots verbally attacking their Conservative counterparts. But, Reinhart and Meghan manage to keep their cool while adeptly exchanging snide remarks akin to their positions. Like much of the battles between the two factions, it is more than a little humorous. 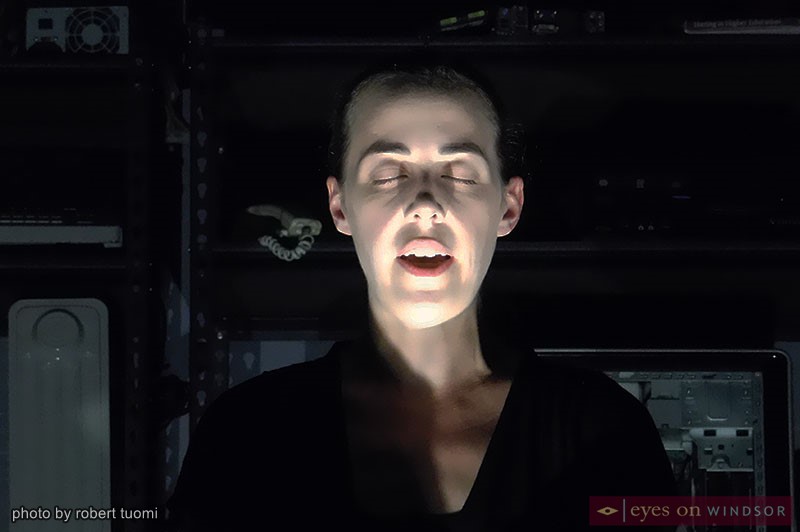 Fay Lynn, cast as Meghan, during opening night of Shelter In Place, talks of the life of a self-centred woman who sits, eyes closed, in a bus station waiting for someone’s fingers to touch her face. Photo by Robert Tuomi / Eyes On Windsor.

There is really only one way to describe the production, nothing is as it seems. This includes an opening set of three monologues. Fay Lynn sits with eyes closed playing an ethnocentric who waits, with her eyes closed, in a bus terminal for someone’s fingers to touch her face. Only Lynn could build such a convincing performance of a person who basically hates everything. Next Michael Potter, almost blind as a bat and wearing two pairs of glasses, in a Garrison Keillor style, discusses the events of a trip to the emergency room. As somber as such a misadventure should be, his captivating style brings it to a human level laced with humour.

Potter opens his section claiming the, “marketers have won.” 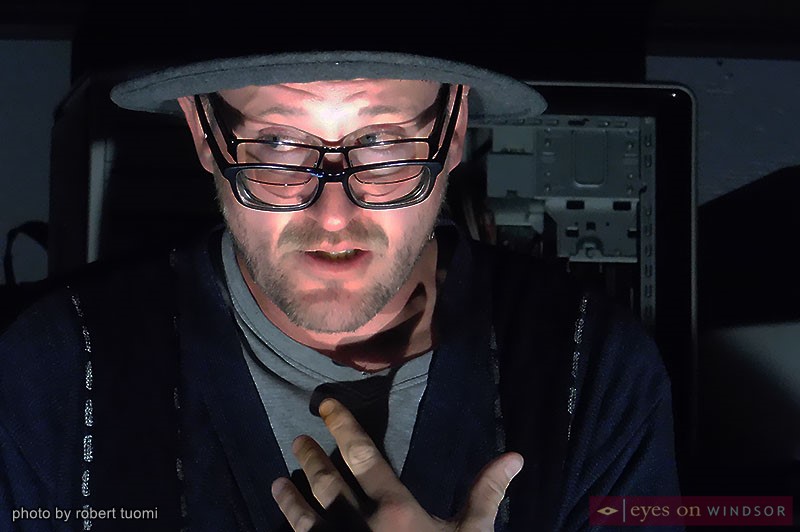 Michael K. Potter, cast as Reinhart. ’a character who has bad eyes, as noted by his double glasses. performs a monologue on opening night of Shelter In Place at Shadowbox Theatre in Windsor, Ontario, on July 20. 2018. Photo by Robert Tuomi / Eyes On Windsor.

The next monologue, featuring Michael O’Reilly, brings a marketer to the stage with tales of the future, one about Adolph, no, not that one, nor Adolph Coors, or even a person.

Then the lights turn on and Meghan and Reinhart begin a journey that really has nothing to do with sheltering in place, but, alas, that is for the audience to try and figure out. The only thing left out of the play is a contest to see who hits on the ending first. Although, admittedly, that could detract from the acting that never skips a beat. 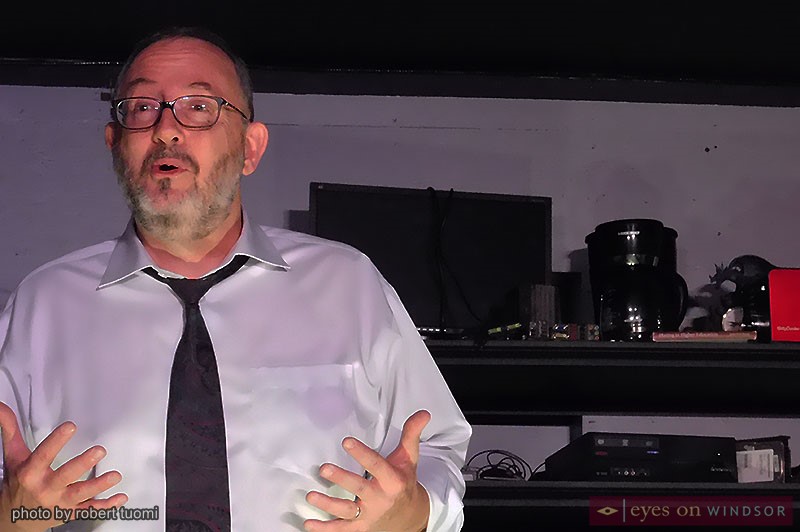 Marketer Michael O’Reilly presents a monologue of the future. You won’t believe what he finds. Photo by Robert Tuomi / Eyes On Windsor.

St. Amand, a technical writer by day working in the local auto parts industry, spends his off the job hours writing. Kind of like the bus driver’s holiday is to go on a road trip.

The prolific author publishes plays, poetry and novels. Copies of his latest book, As My Sparks Fly Upwards, can be purchased at the theatre.

Because of its ending, combined with superb writing and equally exceptional acting, Shelter In Place should lead the nominations as best play of the year. It is staged by Post Productions at the new Shadowbox Theatre, 103B-1501 Howard Ave, corner of Howard and Shepherd, with show dates July 21, 26, 27, 28 & August 2, 3, 4, 2018, Each performance starts at 8pm, tickets are $20 in advance or at the door.

For more details visit the Eyes On Windsor event calendar listing for Shelter In Place.