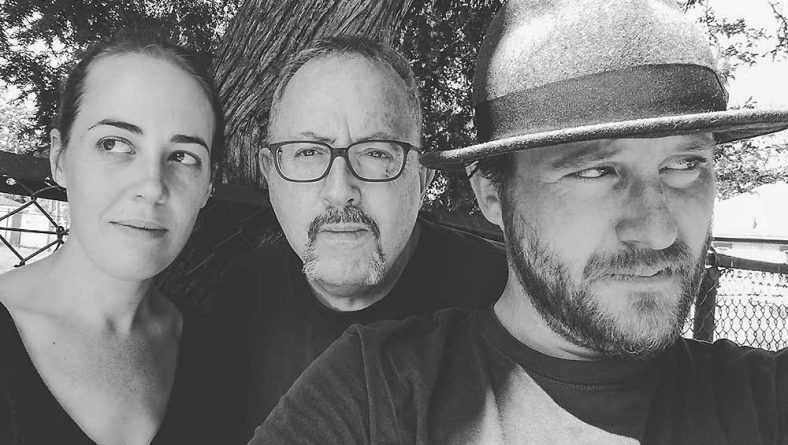 Windsor’s Post Productions Theatre Company is quickly soaring to success which includes opening their own intimate performance venue, The Shadowbox Theatre, where a Grand Opening celebration is set to follow their first show of the 2018 season.

“Artistic Director, Michael O’Reilly and I formed Post Productions in Sept 2016 – that’s when we got our business license – and Oleanna, our first show, premiered at the end of April 2017. Fay Lynn, who starred in Oleanna, started to get more involved in the spring of 2017 as we decided to write The Worst Thing I Ever Did together, and she became a partner on our one year anniversary in Sept 2017.”

The theatre company recently announced it will have a home of its own just in time for the 2018 season. The Shadowbox Theatre is located at 103B – 1501 Howard Avenue (at the corner of Howard and Shepherd). The Shadowbox Theatre is an intimate 60-80 seat venue perfect for the Post Productions brand of full-immersion performances. “We don’t want Post Productions to be a director-centric company,” says Artistic Director Michael O’Reilly. “Our main focus is to make immersive shows chosen for all the talented actors in our area, in collaboration with other sorts of artists – shows that create memorable experiences for our audiences. That memorable experience should start as soon you walk through the door”.

Searching for a home of their own meant that Post Productions had to make some difficult decisions. “For our 2017 season we partnered with SHO: Art, Spirit and Performance, which was a great venue. Just the right size, good acoustics, and the people who run the place are terrific,” says Managing Director Michael K. Potter. “But long-term, we knew we needed our own place. Logistically, financially, creatively – everything pointed to that”.

Ultimately, Post Productions hopes that The Shadowbox Theatre also becomes a go-to venue for intimately-staged performances by other theatre artists in Windsor-Essex. “We had inquiries from companies and artists looking for the venue they needed even before we made our announcement,” Potter says. “Word was getting out. Perfect. Let’s fill this place every night if possible, and bring as many great stories to life as we can fit into any given year.” Anyone interested in booking performances at The Shadowbox Theatre is urged to contact Post Productions at postproductionswindsor@gmail.com.

Aside from finding an appropriate building, the Post Productions partners say the greatest challenge was coming up with the right name. As Creative Director Fay Lynn explains, “We tried to come up with something edgy without being exclusive, artistic but not pretentious, unique but accessible. It was hard. I think in the end, Shadowbox gave us the most pause for thought. It grew on us”. Aside from being a synonym for the “black box” form of theatre, the name refers to physical shadow boxes, which contain objects in specific arrangements held together by a common theme or meaning, as a metaphor for theatre. 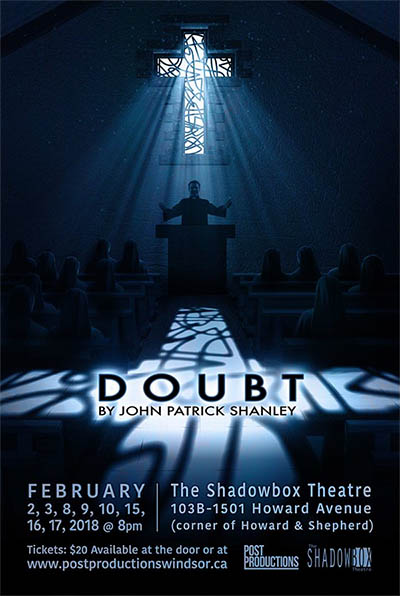 Post Productions’ 2018 season will open with John Patrick Shanley’s award-winning one-act play, Doubt: A Parable. The play is about a harsh and determined nun who suspects a beloved priest of molesting an altar boy.

To celebrate the grand opening, Post Productions is selling a limited quantity of season tickets, which include a guaranteed seat at the premieres of all five shows in their 2018 season (Doubt, Stop Kiss, Shelter in Place, Equus, and Another Fucking Christmas Play), a ticket to the grand opening party taking place right after the premiere of Doubt on February 2nd 2018, a copy of George Manury’s Between You, Me and the Crickets CD, and entry into every raffle and draw that Post Productions holds exclusively for season ticket holders in 2018.

When asked what to expect for the Grand Opening Celebration of Shadowbox Theatre, Michael K. Potter replied, “the party will be free to season ticket holders, and other patrons can attend for just $10 on top of their ticket to Doubt. There will be food, beverages, live music and, we hope, terrific conversation!”

Post Productions provides intense, intimately-staged entertaining theatrical experiences that arouse the heart and fuel the mind, drawing patrons into lives quite unlike their own to help them understand the world, other people, and themselves with fresh insight. As a unique brand of theatre, Post Productions complements the Windsor-Essex scene by staging uniquely provocative productions for audiences that want more for their dollar: post-theatre, post-art, post-entertainment. For more information about Post Productions, including its statement of principles visit http://www.postproductionswindsor.ca

Spotlight To Shine On Several Milestone Firsts For Post Productions