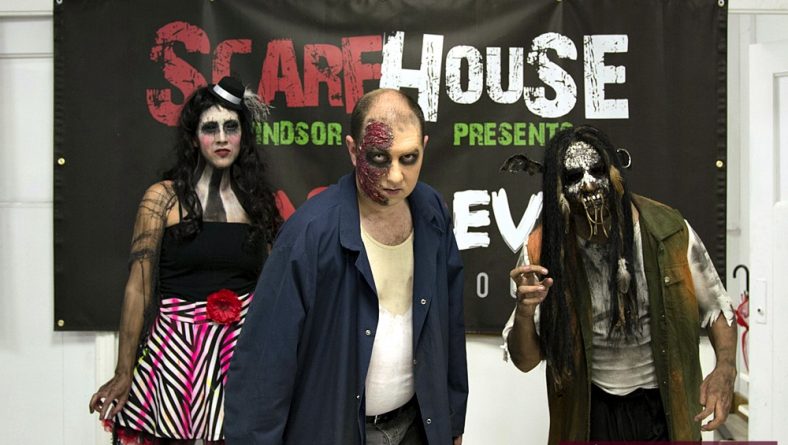 After a decade of temporary locations, Scarehouse Windsor is set to terrorize in their new permanent location, a 106 year old creepy crumbling commercial building that hasn’t been used in over 30 years. 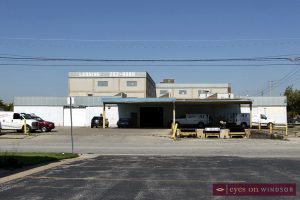 Located at the corner of McDougall and Shepherd, patrons must enter through the loading dock’s giant bay door, travel through a long grungy cement tunnel, open and step through a heavy steel door, and climb up a steep dark dingy cement stairway before entering the elaborate 20,000 square foot Scared Evil Haunted House presented by Scarehouse Windsor. The haunt begins on Friday, September 29th this 2017 Halloween season.

“This building was built in 1911 by the Ideal Spring Company,” explains Scarehouse Windsor owner Shawn Lippert. In 1925 the building was sold to L.A. Industries from Detroit, “they bought the technology for box springs for bed mattresses. Then in 1964 Chrysler needed springs for their seats so they bought the place. Then they sold it in 1985 and it has been empty ever since. Now we’re bringing this building back to life” 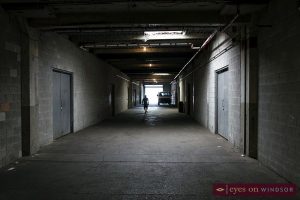 Lippert’s team has been working since 2014 to secure this giant old three story building as the permanent location for their haunted house. Securing the ten year lease and then preparing the haunt involved many challenges. Initially the landlord had to be convinced. “The first time they said no, the second time they said maybe and the third time they said if you get the zoning changed then go ahead,” says Lippert.

The empty building was nothing more than an empty shell. “We had to get the rezoning and long term lease before we invested because installing the infrastructure is so expensive,” explains Scarehouse Windsor’s Dario Silvaggi. “There was no plumbing, no electrical, no cable…”

The City of Windsor now has a Haunted House definition in their city bylaws. 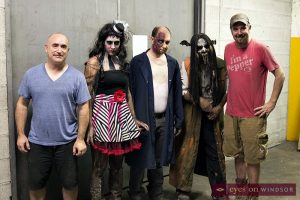 In fact, Lippert wrote the definition himself. Along the way Lippert explained what he wanted to do to various individuals, standing committees, city counselors, and organizations. “Everywhere I went I got the same look with people asking, ‘you want to do what?’,” says Lippert. “And we’ve been dealing with that look for ten years. But everywhere I went the city worked with us.” Ultimately, City of Windsor Counselors voted unanimously to approve the bylaw.

As Scarehouse Windsor’s Scared Evil Haunted House evolves, the permanent location will give thrill seekers the best quality props and special effects experience ever. “Every year we were dreading the moment we had to lock our doors and tear everything down,” says Lippert. “You spend all that time moulding something, you love it, become part of it, and then have to rip it apart.” Now the haunt setup can stay in place and doesn’t have to be torn down. “There was a threshold for the amount of time we could put into a project and we couldn’t get our quality past it. Now we can work on our successes from previous years and polish from year to year. We also have the infrastructure for better special effects.” 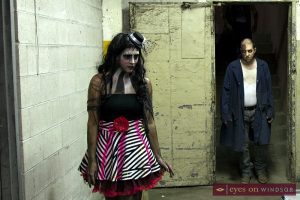 Windsor native and writer/director of the Scarehouse movie, Gavin Michael Booth is excited about the new location and flew into town from Los Angeles this week to help. Booth is busy creating some of the props and scenes for this year’s haunted house. Booth is known for writing and directing The Scarehouse Movie which was shot entirely inside the haunted house attraction when it was located in downtown Windsor at the first Knights of Columbus building ever built in North America. The building is currently the home of the Windsor Centre for Film, Digital Media & the Creative Arts and the Film Camp For Kids and Youth.

The Scarehouse film is now available in North American on BluRay via Amazon. The Scarehouse was Best Feature at the New York City Film Festival and Top 5 Box Office in Canada during its opening weekend. Since then the film has enjoyed theatrical and digital release in various international markets including the USA, UK, Germany, Philippines, Japan and more. The BluRay features never before scene features and a commentary track both heavily featuring Windsor and various Windsor crew who participated in the film. 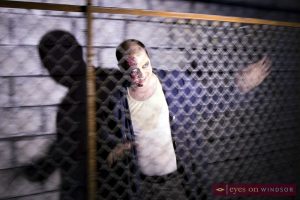 The Scarehouse tells the story of what happens two years after a tragic accident, when six college girls are invited to a party inside an elaborate Halloween funhouse. Once inside, the girls realize their hosts’ intentions are not all fun and games.

The music tracks inside this year’s Scarehouse Windsor Scared Evil Haunted House were taken from the movie and mixed by Gavin Michael Booth himself.

New this year, tickets for specific dates and time slots can be purchased in advance online through the Scarehouse Windsor website. By purchasing in advance patrons will avoid long lineups and are guaranteed minimal to zero wait times.

For more information or to purchase tickets online visit https://www.scarehousewindsor.com 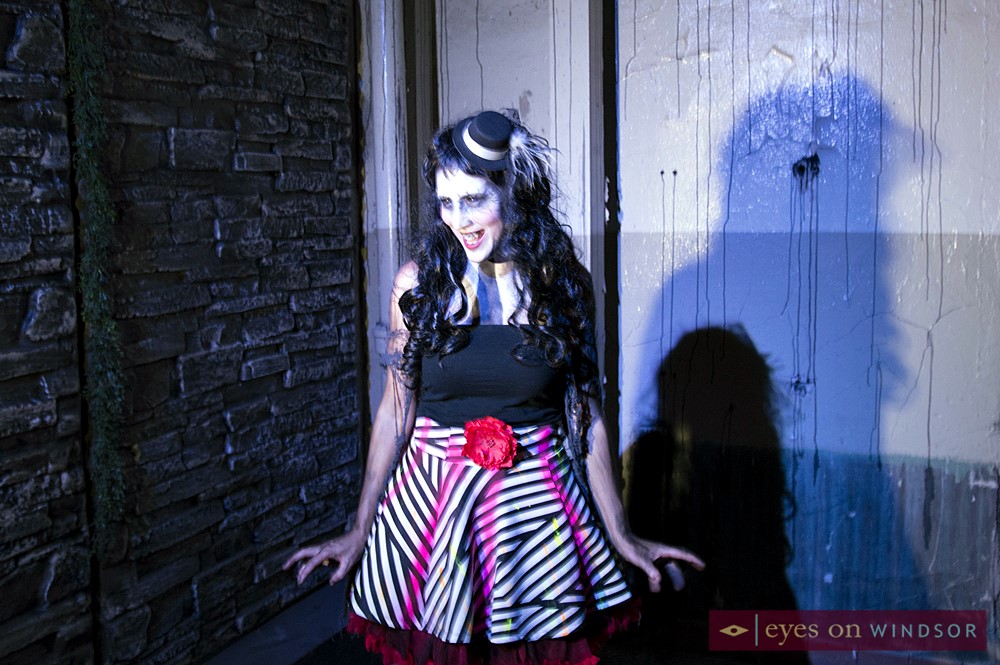 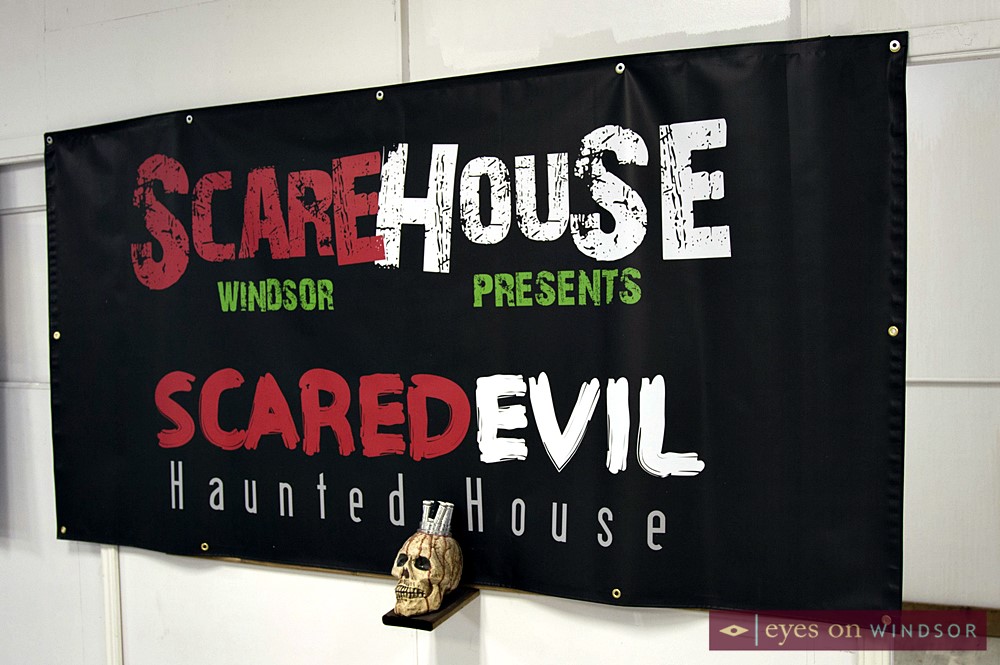