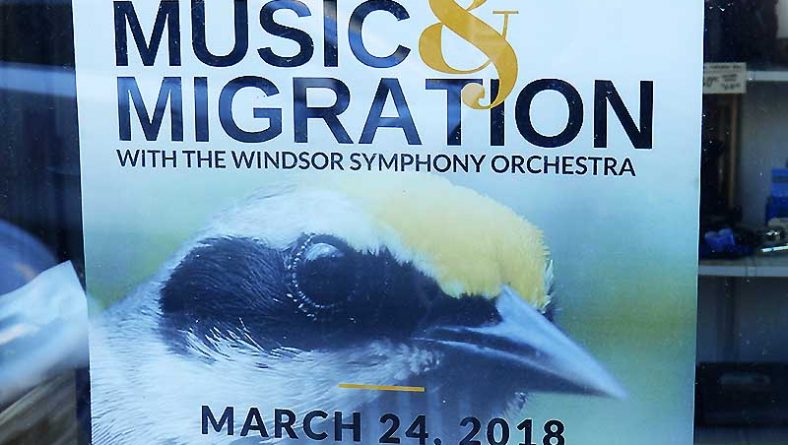 Just ahead of the annual bird migration, the Windsor Symphony Orchestra will spend an hour performing music in tribute to the arriving winged tourists. The event has been put together by the Pelee Island Bird Observatory and will start at 7pm Saturday evening (March 24, 2018) at downtown’s Capitol Theatre, Windsor.

Money raised from this initial musical fundraising evening of bird inspired music will support the Observatory’s education program. The WSO plans to entertain with a little Vivaldi, some Beethoven and round out the evening with traditional local French Canadian folk songs.

Now in its 15th year staff and volunteers at the non-government Observatory study wild birds with an interest in protecting them and their habitats. Arriving birds are also tracked. Their migration monitoring begins in early April. Last year the first sightings included 60 birds representing 10 species such as Wood Ducks, Buffleheads, Common Goldeneye, Northern Shoveler and two American Coots. What will this year bring? Only local and visiting bird watchers will know.

As Canada’s most southerly location, the Island plays host to an almost endless variety of visitors, including birds and the people who love them.

For those interested in living, even for a short stay, among the habitat of the migrating birds, the Observatory rents a fully outfitted lakeside cottage. Funded by a generous donation, it is available to self-catering groups or individuals and can accommodate up to eight people.

Recent upgrades have given the home-away-from-home a new lick of paint, a water filtration system, an electric clothes dryer and a flagstone pathway.

Tickets for Music and Migration can be purchased at eventbrite.ca. For cottage bookings visit pibo.ca.