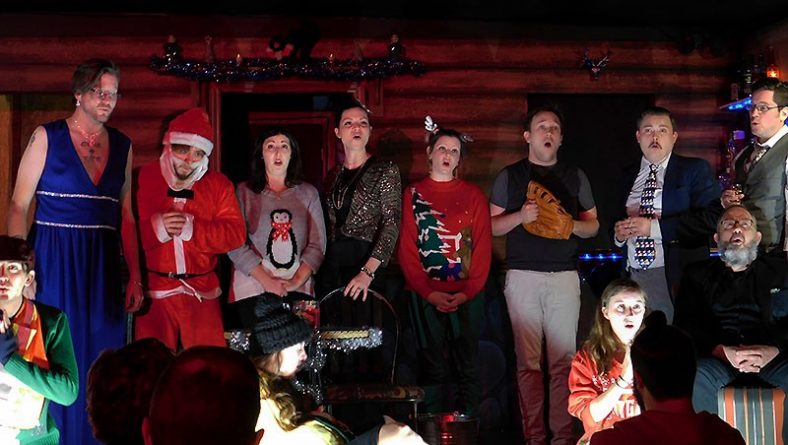 (The whole cast although not all are shown here, join in singing Another Bastard is Born in Post Productions’ Another Fu**king Christmas Play on opening night at Shadowbox Theatre, Nov. 30, 2018. Photo above by Robert Tuomi / Eyes On Windsor.)

Post Productions Admirably and Amusingly Marries Christmas, Love and the Birth of Meb

This summer Post Productions’ Michael K. Potter talked of a coming Christmas spectacular. He hinted there’d be singing, dancing, a large cast and an appropriate story. Now that it’s here, it is clear he forgot to mention one indisputable fact, spectacular should be spelt with a capital “S.”

With Another Fu**king Christmas Play: A Fu**king Musical, now all the go at Howard Avenue’s Shadowbox Theatre, the collaborative team of Potter, Fay Lynn and Michael O’Reilly have cobbled together a major amusing musical wound tightly with love, on a number of levels, stuffed with pathos and tied together with considerable and exceptional all original Broadway style singing and dancing. 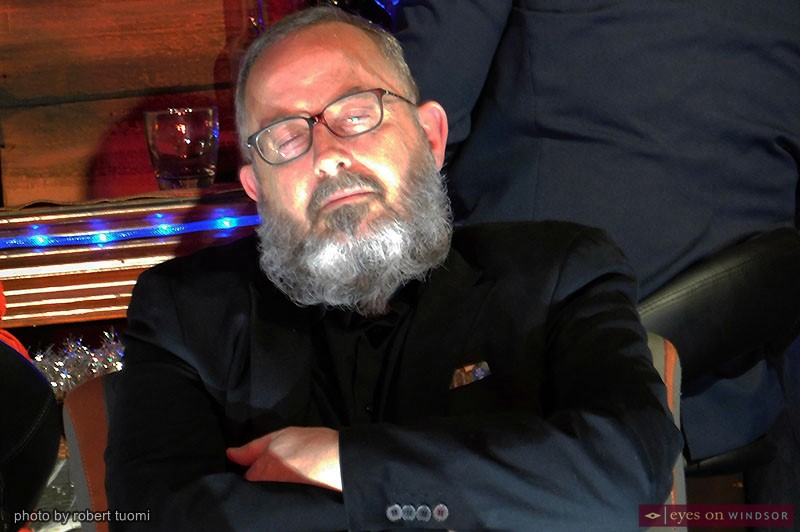 In Post Productions’ Another Fu**king Christmas Play Michael O’Reilly cast as Chris Nichols has a sleeper of a role. Photo by Robert Tuomi / Eyes On Windsor.

Set in a Colorado lodge, the play might also be the response to those who wonder what would happen if misfits, non-law breaking miscreants, youth and failed entertainers end up in the same set of circumstances on Christmas Eve. Although the answer has about as many twists and turns as a highway in the Alps, the most enjoyable moment of the play, a hard call in one with an abundance of memorable moments, is to watch Nikolas Prša burst onto the scene as Teensy Tim O’Pheasant. His creative acting is undeniable in a performance so reminiscent of a young Martin Short that some in the audience had no truck but to pinch themselves to confirm they were not watching Short or even a young Jerry Lewis. 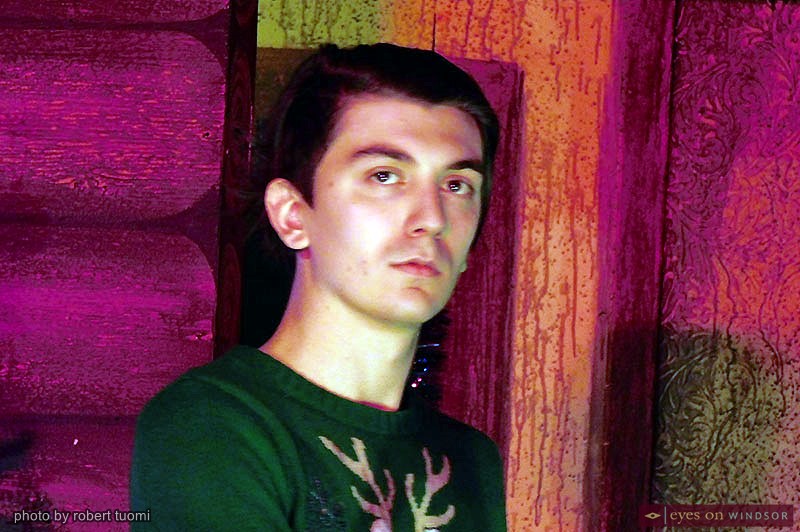 Not to be outdone, Eric Branget, playing lounge lizard Chip Williams – one of two, the other David Burrows’ Biff Davidson – draws on his well-practiced and well worth the practice Broadway elocution to tie the play together. It is this thread of Branget being the glue that most impressed composer Sam Poole. 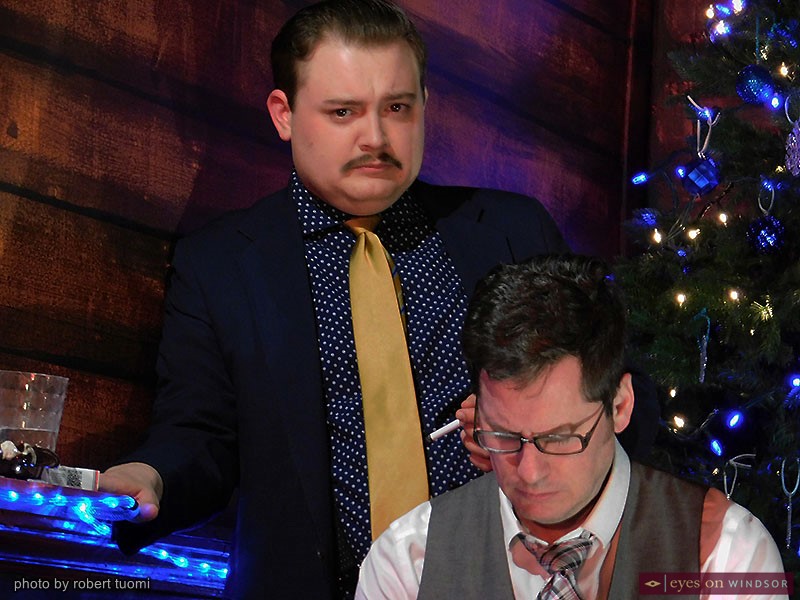 Currently the Company and Fun Home musical director told Eyes on Windsor he was offered the commission of writing the highly ambitious and perfectly executed sound track a year ago and immediately busied himself, to good end, studying Stephen Sondheim and George Gershwin. The resulting eleven songs are of the highest theatrical toe-tapping standards and should be welcomed as musts for dysfunctional family Christmas parties across the land. An original cast recording is available at the theatre. 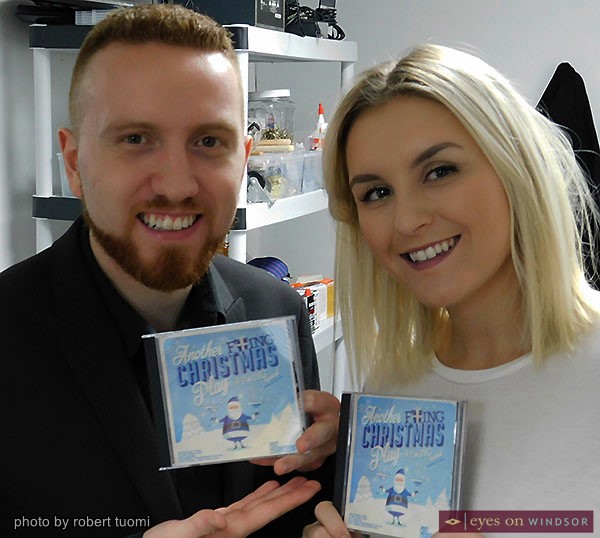 Poole’s work is just one of the many delights of this successfully overarching production that has Fay Lynn dutifully, and at times hilariously, playing the if it wasn’t for low class I’d have no class Carol O’Pheasant. Although incapable of remembering the nomenclature of her three offspring, particularly her nameless child acted with proper indifference by Maria Hausmann, right before the audience, she gives birth to her next and names the young lad Meb. Later she professes her enduring love for transvestite barkeep Willie Finch performed handsomely with his usual alacrity by Michael K. Potter. 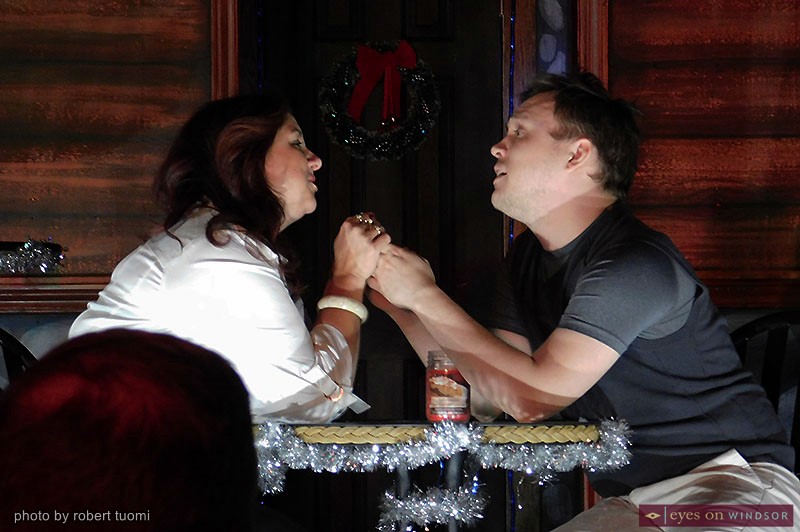 Although rich Marianne Marley is lovingly attached to her boy toy Brody Brosephine he is unable to gift her a Christmas baby in the comical Another Fu**king Christmas Play. Photo by Robert Tuomi / Eyes On Windsor.

Meb ends up solving the problem of overindulgent but kindly rich bitch Marianne Marley, acted to the hilt by Cindy Pastorius. Sadly, and despite abnormal and courageous efforts, her and boy toy Brody Brosephine, done with erratic perfection by Matt Froese, find themselves infertile. After the “purchase,” sensing her displeasure, her amour tells her she is welcome to change Neb’s name to Keith or whatever.

Overseeing all of this is Michael O’Reilly’s elegant Santa like Chris Nichols. Dressed all in black, like Johnny Cash, and while he is scripted to sleep through a few scenes he pulls a fast one and rouses the audience with a frenetic electric ukulele number. He is joined on stage with a preposterous faux Santa, the work of Sam Klasowitz, who manages to do unthinkable things to his fake facial growth which fails to cover his actual growth. 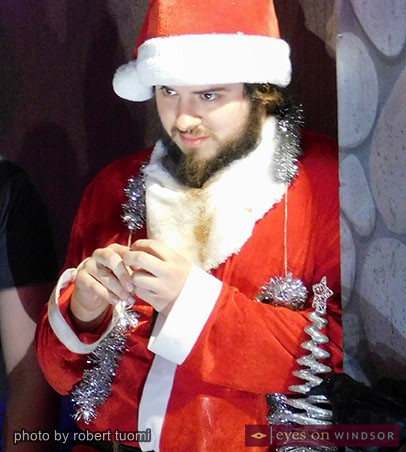 Playwrights Lynn, O’Reilly and Potter have more than succeeded in the almost indomitable task of bringing to the intimate Shadowbox stage a play so well paced it is to be admired. It moves quickly from raucous laughter to pensive moments with an undertow of what is life, best exemplified by O’Pheasant’s daughter Agnes, ably depicted with highly amusing deadpan by the young Julia Pastorius. Facing another disappointing Christmas she cleverly talks of being Jewish and thus a non-celebrant. Aside from this inaccuracy, or so says her mother, she executes her scenes with such pleasing profoundness it is easy to register her character as the lodge’s only sane card carrying member of the human race. 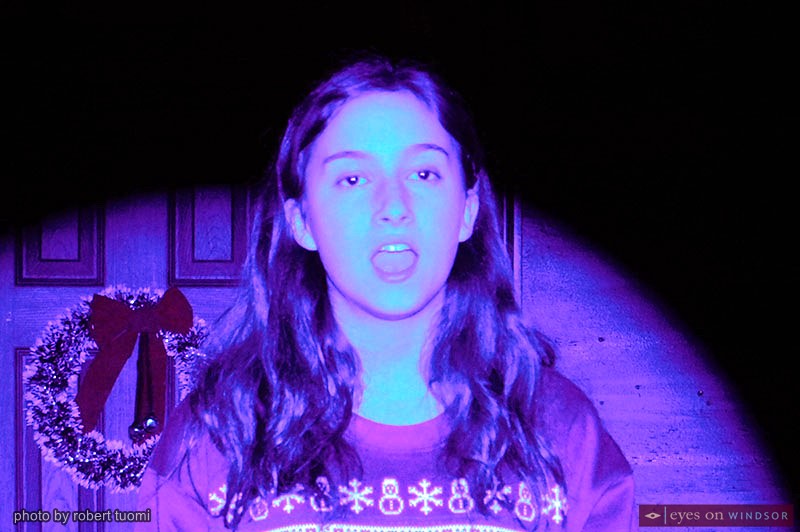 Jewish to a fault, or not, in Post Productions’ Another Fu**king Christmas Play protagonist’s Carol O’Pheasant’s daughter Agnes, played by by Julia Pastorius, is depicted with highly amusing deadpan. Photo by Robert Tuomi / Eyes On Windsor.

Added to this are a number of equally amusing and practical subplots including one exploring the human condition of the penniless Lavigne sisters – acted by Carla Gyemi and Julie Walton respectively – who want their parents remains to fill two urns they have purchased. Their more glamorous sibling Holly, performed by Samantha Edwards, broke up their trio and made off as a cabaret singer grabbing the brass ring enough times to buy the remains but, falling down a peg or two, is looking for a chance to rekindle her act.

The Lavigne sisters played by Samantha Lillian (left) as Holly, Jules Walton as Yula, and Carla Gyemi as Noelle, have a pressing matter to be resolved in Post Productions’ Another Fu**king Christmas Play. Photo by Robert Tuomi / Eyes On Windsor.

To the discredit of its subtitle, this is not just another Fu**king Musical. This is a grand expedition singularly bringing song and dance to the rigours of the incongruities of large family get-togethers during the most wonderful time of the year. As an added bonus, it also reveals what women really want for Christmas.