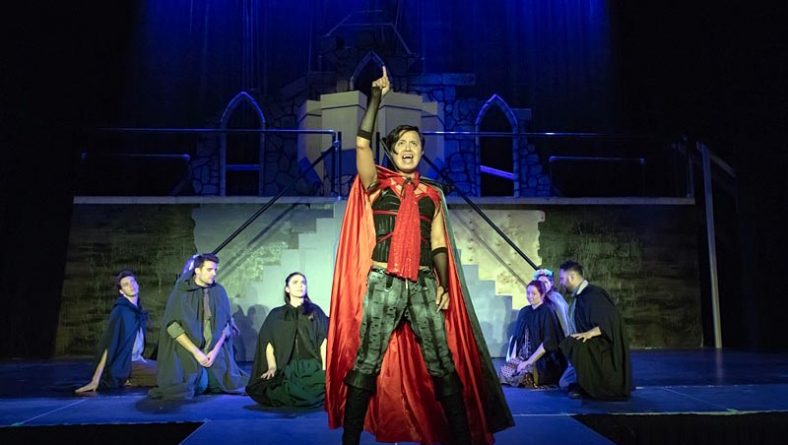 (Pierre Angelo Bayuga, cast as Dracula, in Taylor Lavigne’s musical comedy Raise The Stakes during a dress rehearsal at the Olde Walkerville Theatre in Windsor, Ontario, on October 17, 2018. Photo above by Dan Boshart / Eyes On Windsor.)

When four Gargoyles reimagine the story of Bram Stoker’s Dracula, the horror becomes an outrageous musical comedy, complete with a gay vampire, blood, sex, and a flight-less tap dancing bat, in Taylor Lavigne’s Raise The Stakes, making its world premier in Windsor this Halloween season.

Opening at the Olde Walkerville Theatre on Oct. 18, Eyes On Windsor photographer Dan Boshart joined the cast and crew to cover their dress rehearsal on the eve before the insanity begins. “The show is dirty, awesome, hilarious, and not for the easily offended,” says Dan. “I would see this production just for the tap dancing bat named Pookie (played by Greg Carruthers). He’s a flightless bat who does a hilarious tap dance number.”

After writing the script, Taylor Lavigne who earned an Advanced Diploma of Musical Theatre from St. Clair College, approached his former teacher, Michael Karloff, inviting him to write the musical score for the play. 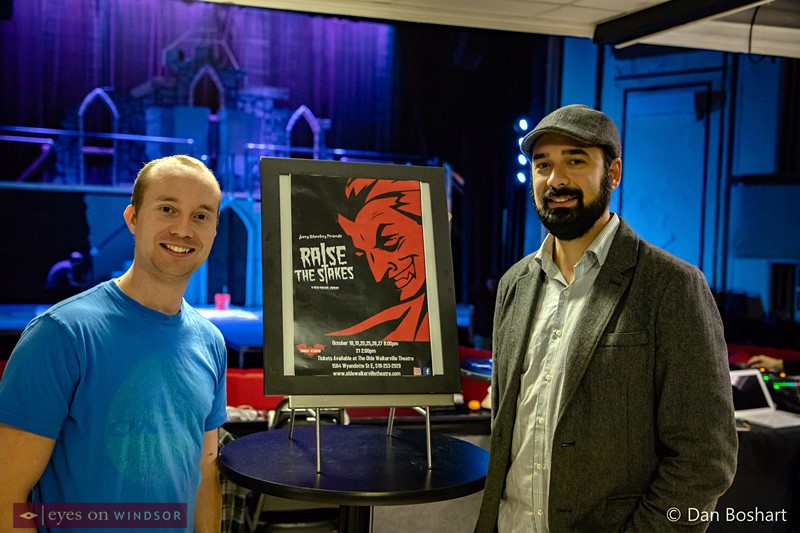 Taylor Lavigne (left) and Mike Karloff during dress rehearsal of their horror musical comedy Raise The Stakes, at the Olde Walkerville Theatre in Windsor, Ontario, on October 17, 2018. Photo by Dan Boshart / Eyes On Windsor.

Mike Karloff has been a University of Windsor music faculty member (jazz) since 2012 and has been the music director of the St. Clair College Music Theatre Program since 2008. He was the City of Windsor’s orchestra director for the 2013 International Children’s Games at the WFCU Centre, and is one of the city’s most in-demand musicians, performing jazz, pop, classical, rock, Broadway and other styles. He performs regularly with The Speakeasy Quartet, The Windsor Symphony Orchestra, Windsor Light Music Theatre, and much more. Recently, Mike led the 15 piece orchestra that joined Windsor’s rock tribute artists Greatest Hits Live during their thrilling ten year anniversary tour.

After graduating, Taylor Lavigne performed in three national tours across Canada and the U.S., as well as professional productions in Toronto. Drawing on his past experiences in the genre for inspiration, Raise The Stakes represents his first foray into writing musical theatre.

The zany characters in Raise The Stakes are played by actors from both the Toronto and Windsor area. They take the audience on a journey showcasing several issues present in modern society as they overcome social stigmas and prejudice with comedy and parody. 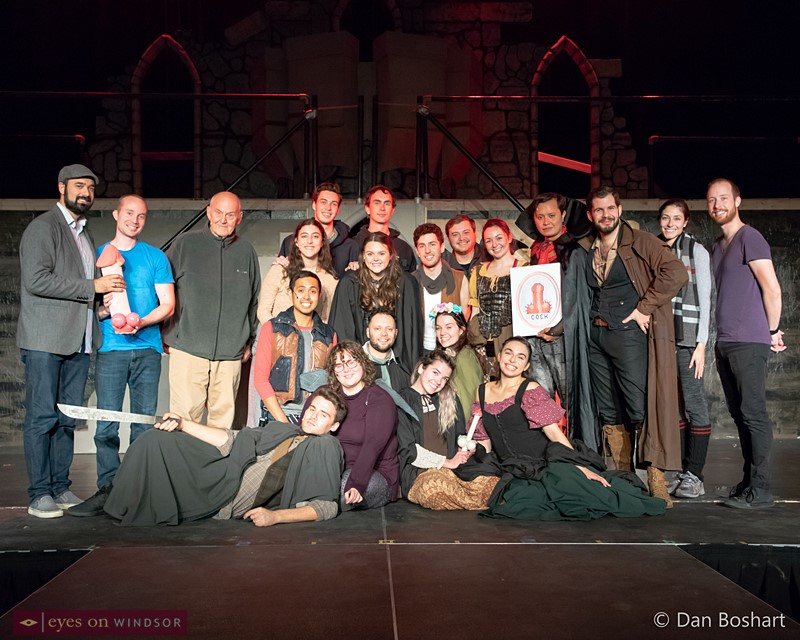 The cast and crew of Raise The Stakes during dress rehearsal at the Olde Walkerville Theatre on October 17, 2018. Photo by Dan Boshart / Eyes On Windsor.

The lead, Dracula played by Windsor’s Pierre Angelo Bayuga, is a societal outcast, his quest for vengeance quickly unfolds into something far deeper. He just wants to be accepted, as the gay undead vampire he really is. Of course he wants to eat people along the way.

Mina, played by Morganna Sneddon, is the strong, fearless, leading lady who rises above her male oppressors to become a hero. 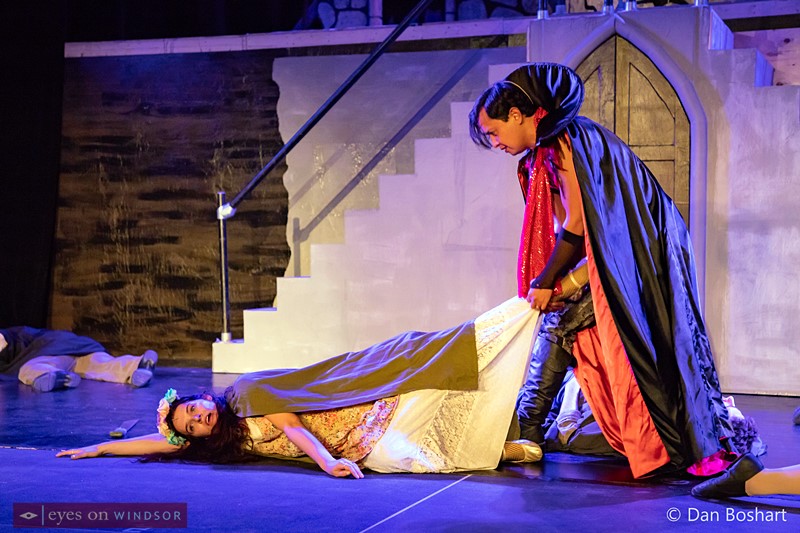 Lucy played by Emma Heidenheim (left), and Dracula played by Pierre Angelo Bayuga, during the Raise The Stakes dress rehearsal on October 17, 2018. Photo by Dan Boshart / Eyes On Windsor.

Jonathan, played by Vincent Perri, finds his masculinity constantly questioned because of his non-confrontational ways. Jonathan discovers he doesn’t need to fit the traditional hero mold. 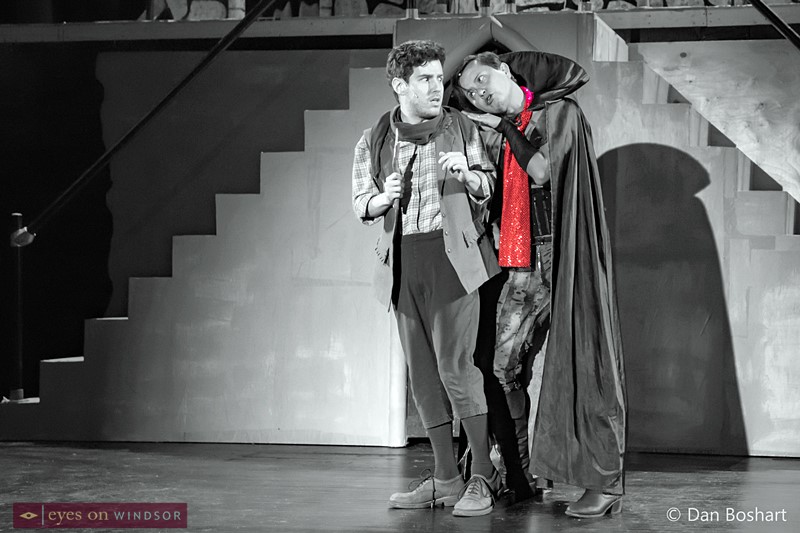 Vincent Perri cast as Johnathan (left) and Pierre Angelo Bayuga cast as Dracula, during Raise The Stakes rehearsal at the Olde Walkerville Theatre on October 17, 2018. Photo by Dan Boshart / Eyes On Windsor.

Pookie, played by Greg Carruthers, is a man-bat battling his own inner demons. When he finally sings, the audience gets a glimpse into what’s going on in his man-bat brain. 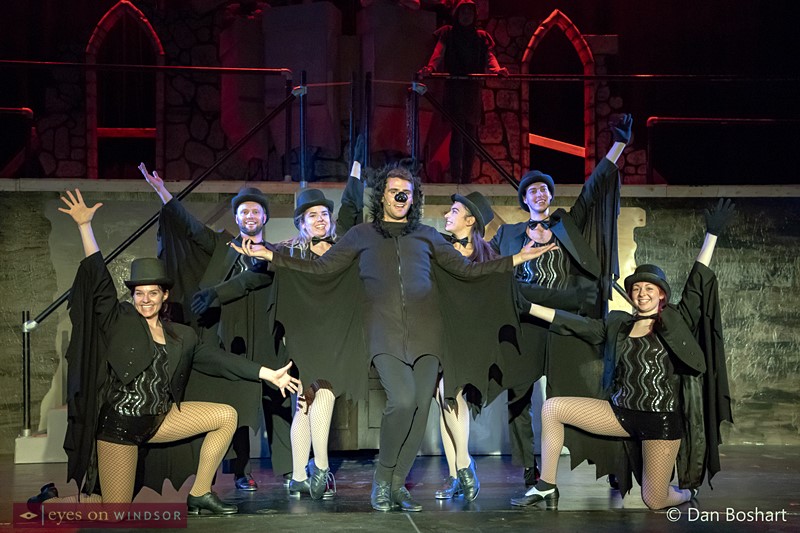 Greg Carruthers (centre) cast as Pookie in Raise The Stakes during rehearsal at the Olde Walkerville Theatre on October 17, 2018. Photo by Dan Boshart / Eyes On Windsor.

Fans of horror-comedies, such as Little Shop of Horrors, and The Rocky Horror Picture Show will really sink their teeth into this show!

Raise the Stakes is Bram Stoker’s Dracula flipped on its head, shook up, made over and released into the night as an outrageous musical comedy! It’s a hilariously R-rated story of blood, sex, and monsters. 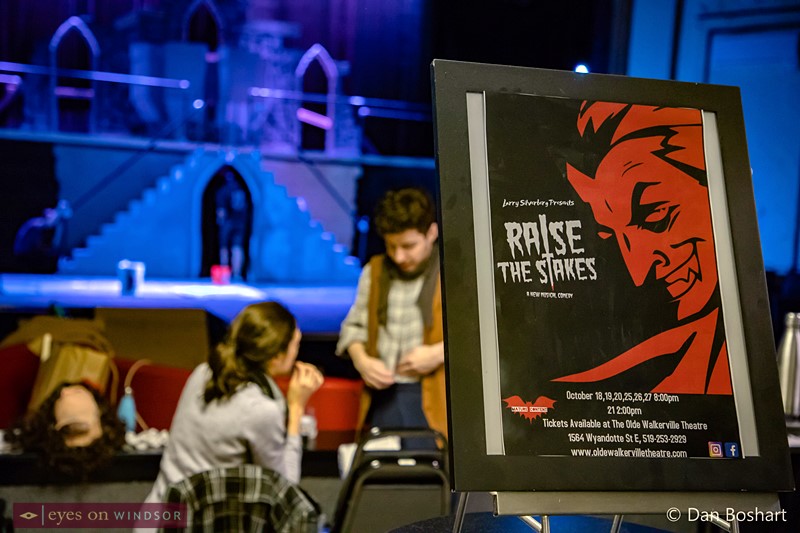 Dan Boshart is a talented photographer from Windsor, Ontario, who is looking forward to spending more time on concert photography when he retires from his full time job in the automotive industry. In addition to shooting bands, he enjoys capturing different scenes as he travels, particularly sailboats and other nautical scenery. Some of Dan’s photos can be viewed on Instagram.