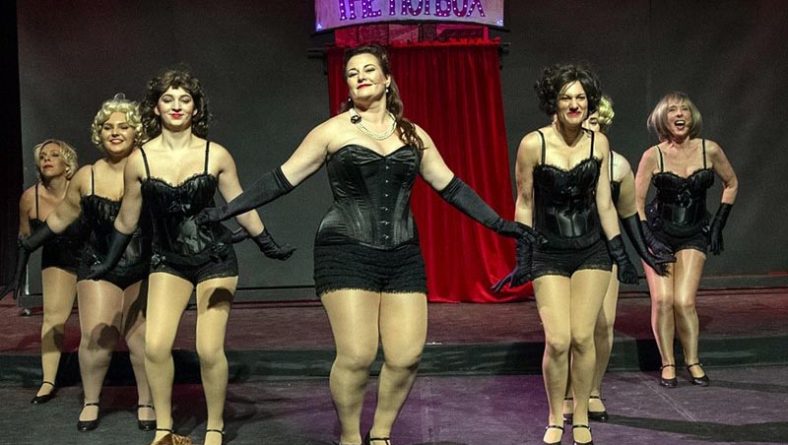 Migration Hall Productions took a gamble on not only on putting on the challenging award winning Broadway musical Guys & Dolls, but on also creating a luxurious cabaret style night out feel for their audience. Ultimately, their theatrical crap shot is a “natural” or dice roll of sevens and elevens, which in craps means the big win!

Director Melissa McLeod, took some time to speak with Eyes On Windsor when we arrived just before rehearsal of Act II, on the evening before opening night (Feb. 21). Recently married, she is known in the local theatre scene where she has worked under her maiden name, Melissa Joy.

“Guys and Dolls is about life in the 1950’s in New York,” explained Melissa. “It was a rich time after the war and the depression. It was a bright time with gamblers and a whole new burlesque movement that was happening, it was sort of a high time.” 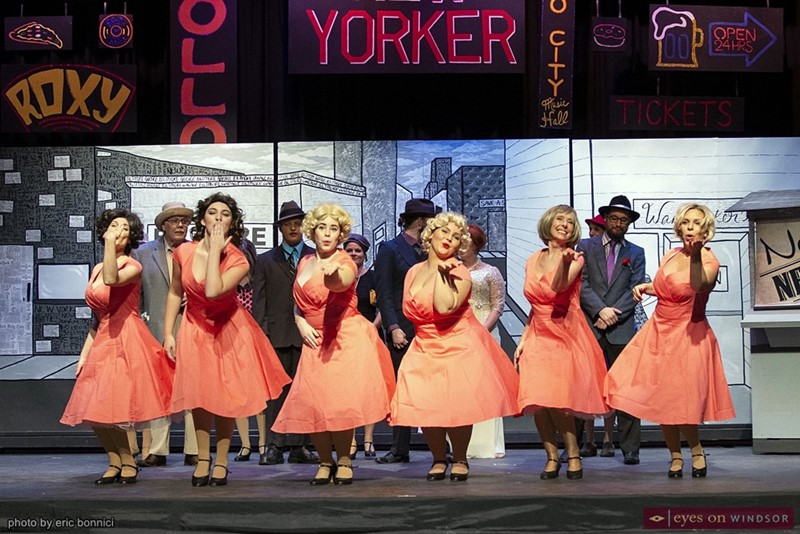 Set in Damon Runyon’s mythical New York City, Guys and Dolls is an oddball romantic comedy. Gambler, Nathan Detroit (played by Dan Santos), tries to find the cash to set up the biggest craps game in town while the authorities breathe down his neck; meanwhile, his girlfriend and nightclub performer, Adelaide (played by Stephanie Allen Santos), laments that they’ve been engaged for fourteen years. Nathan turns to fellow gambler, Sky Masterson (played by Eric Miinch), for the dough, and Sky ends up chasing the straight-laced missionary, Sarah Brown (played by Becca Silvius), as a result. Guys and Dolls takes us from the heart of Times Square to the cafes of Havana, Cuba, and even into the sewers of New York City, but eventually everyone ends up right where they belong. 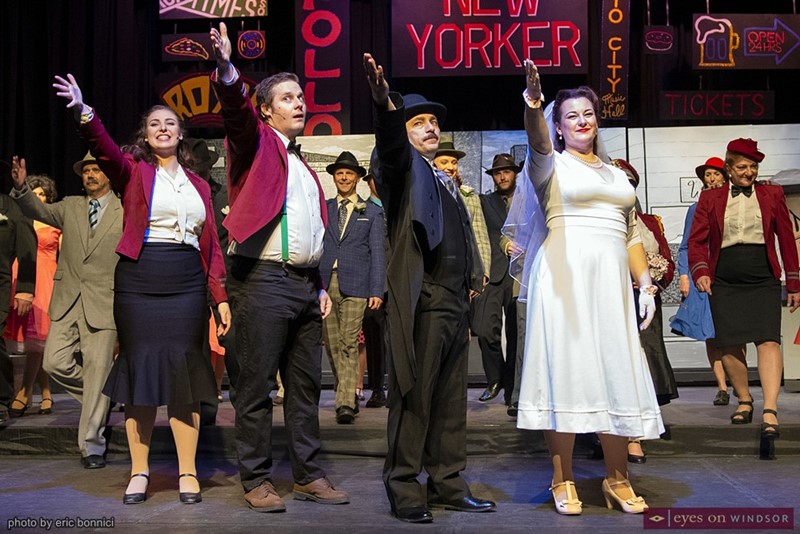 The challenge of putting on a production of Guys & Dolls for a community theatre group lies, partly, in casting multiple male and female singers, dance choreography of the large cast, creation of the set and costumes, and, in this case, incorporating a live orchestra.

Melissa says the show is coming together really well and her cast is amazing. “This show has two really strong elements in it. It has a lot of male singers. So going into the process that was one of the concerns, that I wasn’t going to get enough male singers. The other is that it does have quite a huge quantity of dance in it. So when it came to auditions I was pleasantly surprised that I got really great male singers coming out. And I have an excellent choreographer, her name is Becca Silvius and she’s playing Sarah Brown. She took a group of dancers and non-dancers and made them look amazing on stage. So I’m really proud and happy about that.” 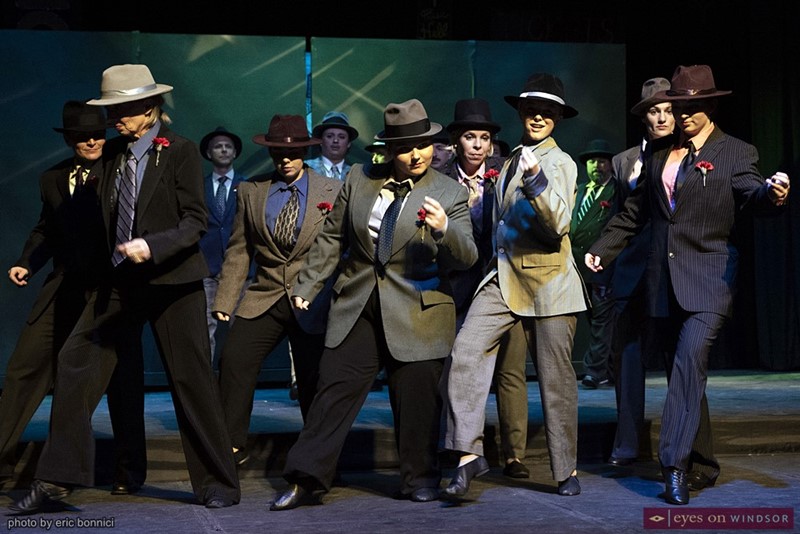 A dance scene being performed during Guys & Dolls by Migration Hall Productions in Kingsville, ON, on Feb. 21, 2019. Photo by Eric Bonnici / Eyes On Windsor.

In addition to show choreography and playing one of the lead roles, Becca also designed and painted the set. “I have a great dedicated cast,” says Melissa. Community theatre groups rely on their cast and crew for all aspects of putting a show together. “Everybody was here the weekend before, painting, working on costumes, and setting up. It really takes that team effort to make something like this happen. So it was a positive experience that way. And we have Music Express (a live orchestra) playing.” Music Express Director, Beth Dykeman, is also the Musical Director for this production of Guys & Dolls. 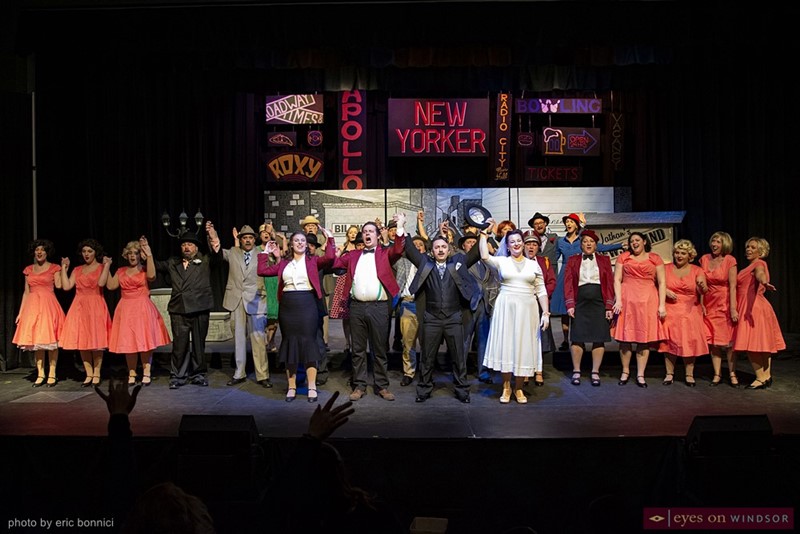 The cast takes a final bow during curtain call while standing in front of the vibrant set of Guys & Dolls by Migration Hall Productions in Kingsville, ON, on Feb. 21, 2019. Photo by Eric Bonnici / Eyes On Windsor.

Migration Hall’s Guys & Dolls puts extra effort into immersing audiences in a nostalgic post-prohibition cabaret atmosphere both on and off the stage. Beyond the stage, the hall’s bleacher seats have been replaced by round tables elegantly covered in dark tablecloths and matching chair covers.

“Sometimes setting up the space for the audience is as important as the set up on stage,” explained Melissa. “We wanted it to be cabaret style, so we have tables set up and we’re going to have a cash bar, and New York Street Food available for purchase (catered by a food truck in the parking lot). You get a table of eight and can come with all of your friends, grab a bottle of wine and have a hoot of a time. It does cut into the seating (capacity) a little bit but it was the overall experience that we were concerned with. We would rather have people come out and feel that they were having a luxurious evening out, watching all these fantastic costumes on stage, watching some burlesque dancing, and seeing some gamblers with these great suits. We want people to have that similar feeling while they are here in the audience.” 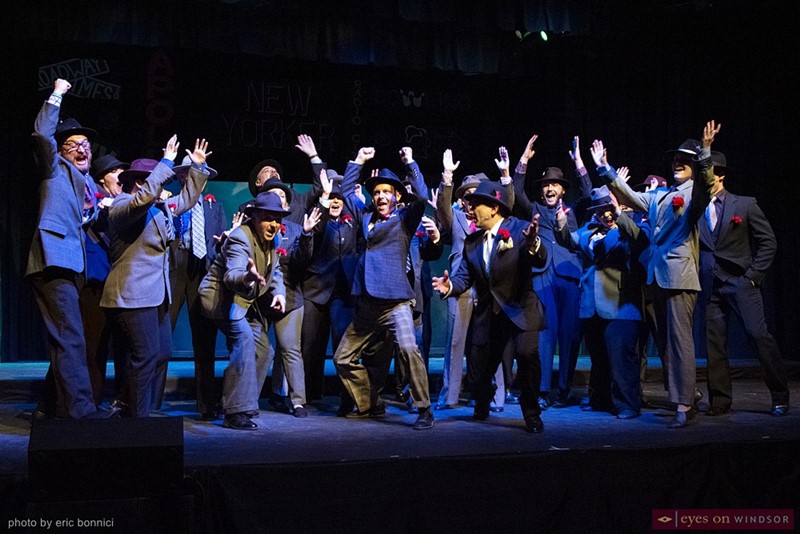 Gamblers cheering during a craps game scene in Guys & Dolls by Migration Hall Productions in Kingsville, ON, on Feb. 21, 2019. Photo by Eric Bonnici / Eyes On Windsor.

Act II opened with an upbeat prohibition era feel set inside the Hot Box Club where Miss Adelaide is a featured cabaret / burlesque performer. This well choreographed scene filled with dance and the spectacular vocals of Stephanie Allen Santos was charming, risque, and captivating. Stephanie along with the Hot Box Dancers (played by Liz Durance, Stacey Jones, Kelsey Laliberty, Emily LeClaire , Savannah Mastronardi, and Teresa Mazzella) strutted onto the stage in elegant dresses and mink fur coats. Everything from costumes and choreography to singing and stage lighting was rather sexy, especially the ladies. Things really heated up when the ladies tore off their dresses revealing their classic cabaret style lingerie and lots of skin.

Make no mistake about it, Stephanie’s female lead counterpart, Becca, while playing the role of a bright eyed girl next door conservative Missionary type, heated up the stage as well. Her costumes, choreography, and spectacular singing is sexy in it’s own right. 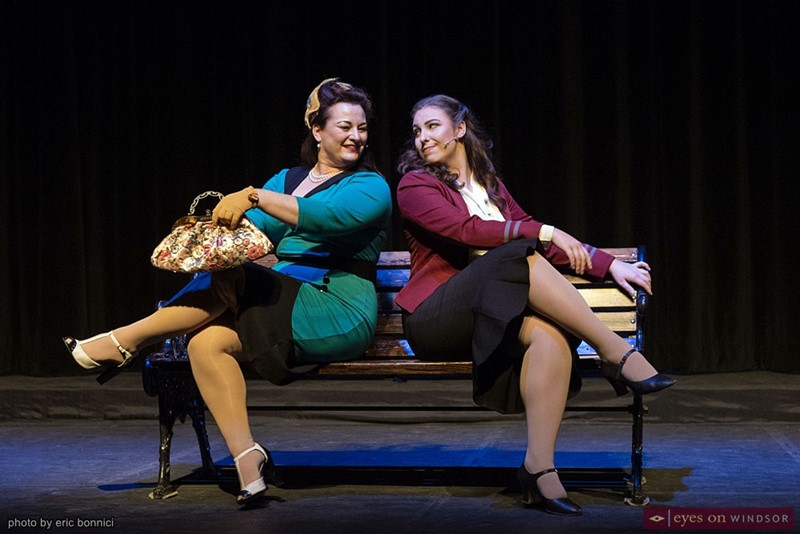 Stephanie Allen Santos as Adelaide (left) and Becca Silvius as Sarah Brown performing in Guys & Dolls by Migration Hall Productions in Kingsville, ON, on Feb. 21, 2019. Photo by Eric Bonnici / Eyes On Windsor.

The male leads, Eric Miinch and Dan Santos, in their dapper suits and hats, blew us away as well with their performances. Eric portrays Sky Masterson fantastically! He had us laughing with his comedic antics and his powerful voice is captivating. Then there is Dan Santos who shocked us with his stellar performance. Not only did he have the most lines in the play but this was his acting debut! 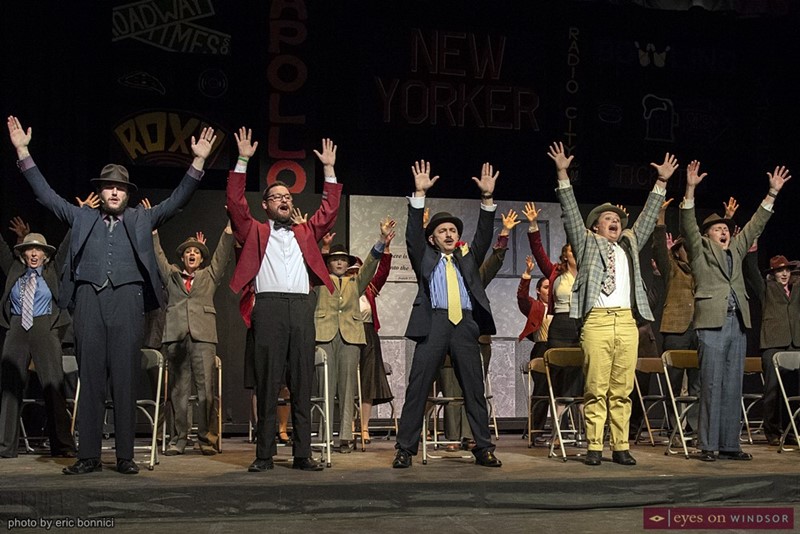 Dan Santos as Nathan Detroit (centre) makes his acting debut during Guys & Dolls by Migration Hall Productions in Kingsville, ON, on Feb. 21, 2019. Photo by Eric Bonnici / Eyes On Windsor.

The audience will be amazed to learn that sensuous Hot Box Dancers Stacey Jones, and Kelsey Laliberty are also making their acting debut in Guys & Dolls.

Everyone who worked on putting Migration Hall’s Girls & Dolls together, like a close family, can be proud of this production. Director Melissa McLeod has actually come full circle with this show. “I do have to say Guys & Dolls was the first show that I was ever in,” explained Melissa. “In grade 9, my mother forced me to audition for a show because I was shy but I loved to sing. It was a really good thing and set me on a path. I didn’t know where I fit in the social world. I was in the chorus and I just remember this feeling of exhilaration and confidence. What came out of it was a family type feeling of group of friends I had. Then I went on feeling more confident the next time I got a supporting role, and it went on from there. It really did build the love for this in my life.” Melissa’s love for theatre and specifically this production of Guys & Dolls, along with the whole cast and crew who poured their hearts and souls into it, really shined through in a sexy, charming, and fantastic way when we watched them perform. 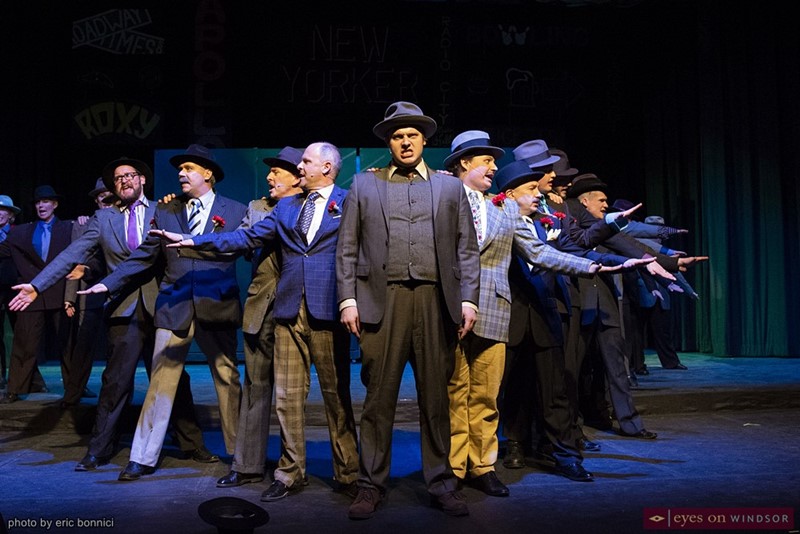 Eric Miinch as Sky Masterson (centre) performed during Guys & Dolls by Migration Hall Productions in Kingsville, ON, on Feb. 21, 2019. Photo by Eric Bonnici / Eyes On Windsor.

Our only complaint is that we didn’t get to see it with a full audience. Judging from what we witnessed during rehearsal, we are confident a packed audience cheering and clapping, will only make Migration Hall’s Guys & Dolls another outstanding and memorable show by this talented theatre group.

The final three performances of Migration Hall Productions’ Guys & Dolls takes place this weekend at Kingsville’s Migration Community Hall on March 1, and 2, at 7pm, and March 3 at 2pm. Tickets will be available at the door if not sold out. For more information or to purchase tickets in advance online visit http://migrationhall.com