The Masters of Illusion Tour has reappeared for two exciting shows at Caesars Windsor featuring some of the most renowned magicians and illusionists on the planet. Two years ago, during February 2013, Masters of Illusion dazzled audiences at The Colosseum with some of the greatest magic ever seen live on stage. The largest magical tour in the world has reappeared for two all ages shows taking place at Caesars Windsor on Saturday March 7, at 2pm and 8pm.

Two of the performers, Greg Gleason and Titou, have over 50 years of combined experience, and demonstrated their magic skills for the media during set up for the Windsor show the day before.

Greg Gleason has been doing magic since he was 13 years old. “I’m from Dallas Texas but have been doing magic in Vegas for the last 22 years. This is my third tour with Masters of Illusion,” says Gleason. 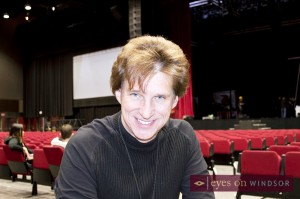 Gleason first appeared on the Masters of Illusion T.V. show in 1999. The T.V. series has been back on the air again since 2013 on the CW Network. Gleason shot 8 episodes scheuled to be broadcast this summer on Friday nights. This is Gleason’s first time in Windsor and thrid time on the tour.

“I do all kinds of magic from slieght of hand, to mind reading, to comedy magic, to illusions, I’ll be doing a little bit of all of them including mind reading and grand illuisons,” explains Gleason. 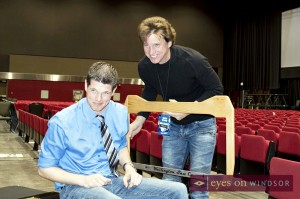 During the media interview Greg even put a saw right through CTV Windsor News reporter Chris Campbell. Greg hinted he will attempt to make a helicopter appear on stage during his performance.

French magician Titou is another one of the star magicians in the Masters of Illusion world tour and TV series. Titou, born and raised in Paris France and currently based in Los Angeles, is a member of the elite magic club, The Academy of Magical Arts in Hollywood, where he is now a regular performer. 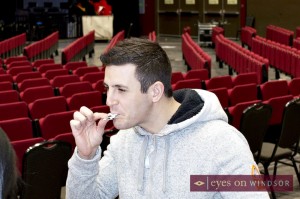 Titou brings the “French Touch of Magic” to audiences around the world.

“Since I was 7 or 8 years old i was doing magic, now I am 28 and moved to Los Angeles almost 5 years ago,” says Titou. He started on The Masters of Illusion T.V. show on a 3 month contract that was extended an additional 8 months. “I didn’t want to move back to France so I applied for a visa. When I lived in France I travelled all around the world performing and now I do the same thing but based out of Los Angeles. This is my fourth time on the tour and second time touring in Canada,” says Titou.

Titou is excited to be back in Windsor to perform for a second time. “We are happy to be staying in Windsor because Caesars Windsor has a very nice hotel. The view from my hotel room is beautiful. I’d like to walk around and visit Windsor more if we have time,” says Titou.

“I do comedy magic and have fun with my french accent during the show,” says Titou. 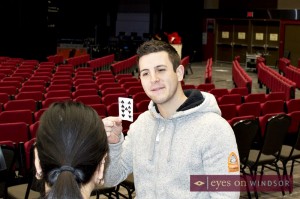 During our interview Titou performed a fun card trick and he even burned some paper and transformed it into tickets for Saturday’s show.

Several more all star magicians are scheduled to perform during the show at Caesars Windsor.

Masters of Illusion is the largest magical touring show in the world showcasing thrilling illusions by some of the greatest magicians on Earth. From daring escapologists, eye-popping illusionists and mind-blowing quick-change artists to comedy magic and beautiful dancers, the amazing performers of Masters of Illusion always astonish and delight their audience.