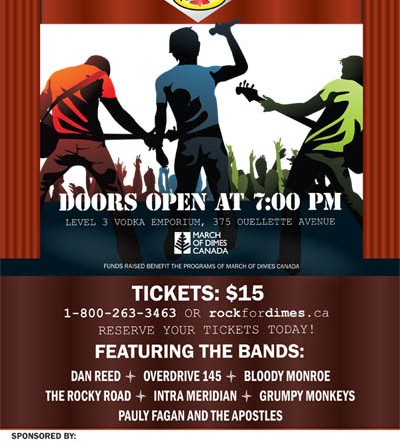 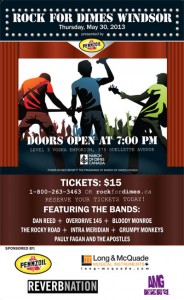 There’s a battle of the bands brewing in Windsor Ontario over bragging rights to who should be named the best band in the city. We’ll find out who that band will be on May 30, 2013 at Level 3 Vodka Emporium when Rock for Dimes Canada brings a Battle of The Bands to Windsor for the second year in a row. Pennzoil Presents Rock for Dimes Windsor 2013 has finalized a list of local amateur bands who are brave enough to step up to this challenge. The Windsor bands will showcase their talents in front of several Canadian music professionals at this event to benefit March of Dimes Canada’s programs and services for children and adults with disabilities.

The bands will be judged by a roster of Canadian music professionals including Dennis Ullman. Locals will remember Ullman as the drummer from Windsor’s Icy Redd band, known for their versatile style that features the top hits of today along with the very best classic tunes from the past. Ullman has worked as a freelance performer, educator and music festival adjudicator for over 30 years. Having Dennis on board as a Pennzoil Presents Rock for Dimes Windsor judge will be a treat for local fans of Icy Redd. When asked who else will be judging the Windsor event, Ullman says, “we have Darren Eve (local musician/radio host), Joseph O’Neill ( London area musician ) and a representative from March of Dimes – Neil St. John ( Toronto area musician ).”

With an impressive line up of judges and bands Pennzoil Presents Rock for Dimes Windsor is sure to deliver the ultimate live music experience.

So if you’re a fan of any of these local Windsor bands this is your chance to support them and experience an intense
night of live musical entertainment in Downtown Windsor. Come by early and grab a bite to eat at The City Grill then head upstairs to Level 3 Vodka Emporium and witness this Battle of The Bands for yourself live.