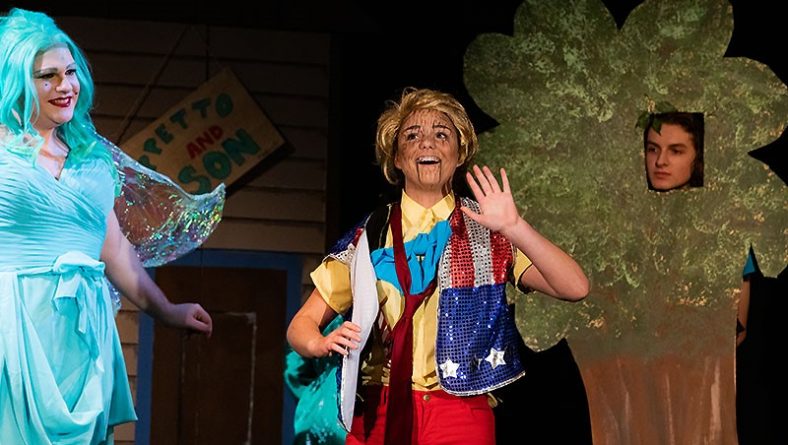 (Pinocchio played by Gina Marshall (centre) in Korda Artistic Productions’ holiday panto, Pinocchio No Strings Attached, smiles and waves during her performance at Kordazone Theatre on Dec. 6, 2018. Photo above courtesy of ChurchwoodPictures.com)

If there is one thing to know about a Panto, it is its two-dimensional nature, an overlay of something for the children and something completely different for the adults in the audience. It has been that way since actor John Rich introduced the concept to British theatregoers in 1717.

In its latest Panto, the 14th in as many years, Korda Artistic Productions took playwright Jeff Marontate’s updated “Pinocchio, No Strings Attached” into a modern day, yet whimsical and musical, puppet-to-boy story and knocked it out of the ballpark, as they say. 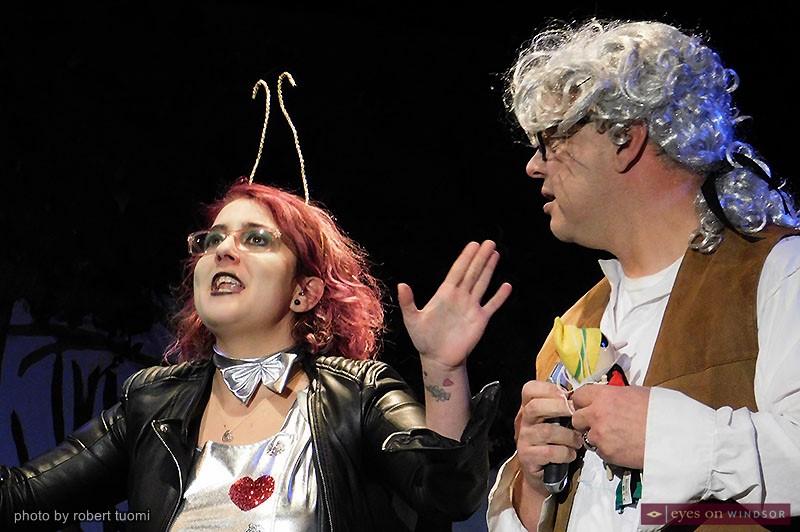 Post show accolades, after Thursday night’s opening performance, poured in for Gina Marshall’s defining portrayal of the show’s star Pinocchio. She shone brightly while bringing to life Marontate’s superb writing. Marshall is blessed with the endearing, uncanny ability to frown with the utmost sincerity and to sing with exceptional clarity. Her treatment of musical director’s Colin Zorzit’s slightly altered “Hair,” from the musical of the same name, was so perfect the audience momentarily was transported to Broadway.

Two characters from Korda Artistic Productions’ Pinocchio No Strings Attached, Gina Marshall (left) as Pinocchio next to a thoughtful Alfalfa, played by Cavelle Doucet-Lefebvre at Kordazone Theatre on Dec. 6, 2018. Photo courtesy of ChurchwoodPictures.com.

Because of the need to reflect the classic Pinocchio story, Marshall’s nose would have to grow to reveal a lie. Obviously, such nose growing was not in the cards and apparently a lie detector was not as well. Instead Marontate ingeniously met the challenge head on by having Marshall’s hair change colour at each juncture of an untruth.

Despite being a wooden character, Marshall is no wooden actor, although she does admit to be made of knotty pine, with the emphasis on “naughty.” Masterfully, she navigates the story at times playing an animated puppet, then a donkey – she does very believable donkey sounds – and “a conniving little rat” – an accusation by the evil Thrombo, played to sinister perfection by the eye-patched John Shellhorn. But, what she plays in the surprise ending is a real twist. Suffice to say, she makes Korda great again, not that it ever wasn’t. 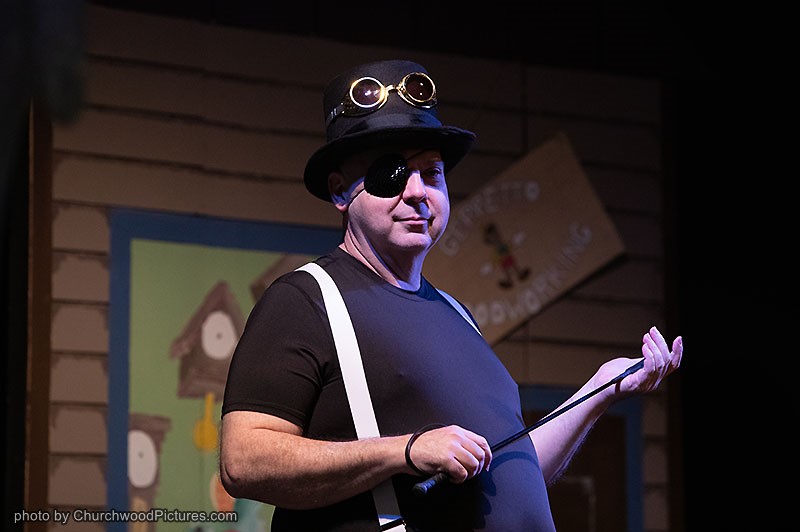 Every play has a villain. In Korda Artistic Productions’ Pinocchio, John Shellhorn puts in a stellar performance as Thrombo. He also did double duty, playing the Fairy Godmother as well at Kordazone Theatre on Dec. 6, 2018. Photo courtesy of ChurchwoodPictures.com.

Colin Zorzit scores high with his adaptions of well-known hits from Broadway musicals giving the play its own original soundtrack with a fair amount of stage and screen familiarity. This includes a first for a Windsor stage. Two songs are taken from the Broadway blockbuster Hamilton with words to fit the action on the stage. 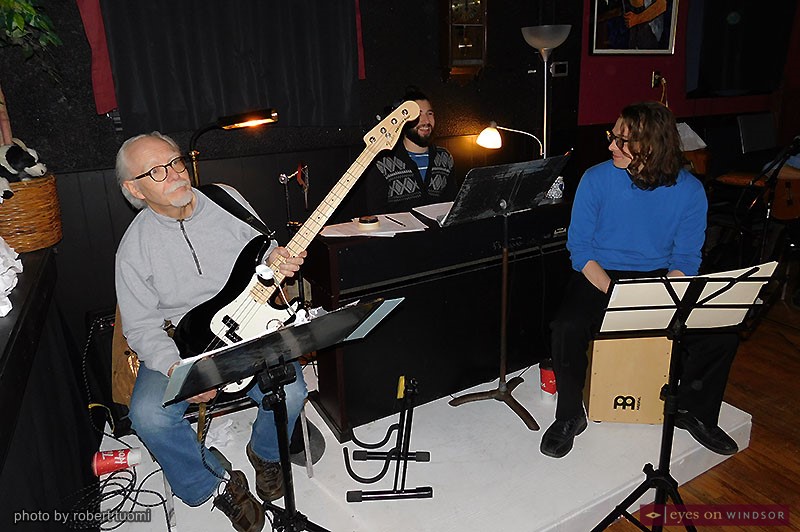 The premise of the play is the challenge writers have of writing masterpieces. It is based somewhat on a true story. For eight months, writer Marontate, tells Eyes on Windsor, he suffered an incredible and prolonged dose of writer’s block. But, this summer, on a remarkable short three day trip to Pelee Island, the whole play unfolded, everything flowed including his beloved double entendres which is what Panto is all about. It characteristically offers something for the children and more adult laugh moments for their parents. Although Korda’s Panto is a seasonal treat it is not normal for the play to be about the season. Which is why the story of Pinocchio fits so well into the scheme of things.

To reflect the writer’s pain and struggles, the play opens with Clinton Hammond, playing Morontate, trying to write a play. Throughout he endures public tête-à-têtes with fine young actor Stephanie Cragg, playing his producer. Both tie the action together as sort of masters of ceremonies while the actors take to playing the thoughts Hammond’s author is assembling and disassembling. This certainly opens up considerable creative freedom, having both Hammond, Cragg and others toss out insider theatre type jokes nonetheless well understood by the audience. 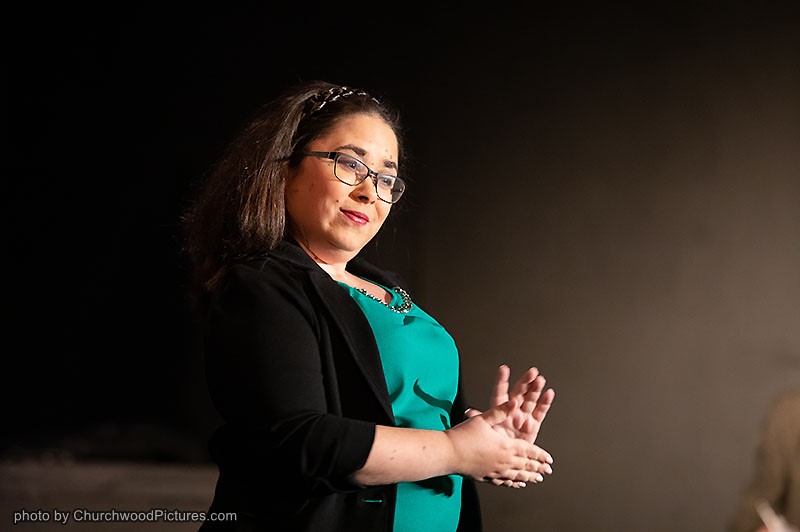 Stephanie Cragg playing the role of the Producer in Korda Artistic Productions’ Pinocchio at Kordazone Theatre on Dec. 6, 2018. Photo courtesy of ChurchwoodPictures.com.

One of Marontate’s most prized double entendre is delivered with perfect honesty by Chris Fazekas in the role of the Turquoise Fairy. There are a few fairies in the play, some, like Fazekas are in drag, others not so much. His fairy enthuses about meeting the man of her dreams, a short fellow with the name of Randy. He almost became the eighth dwarf, from the Snow White story, but didn’t make the cut. She confides about him earning his name correctly if only because she must keep his nose out of her business. 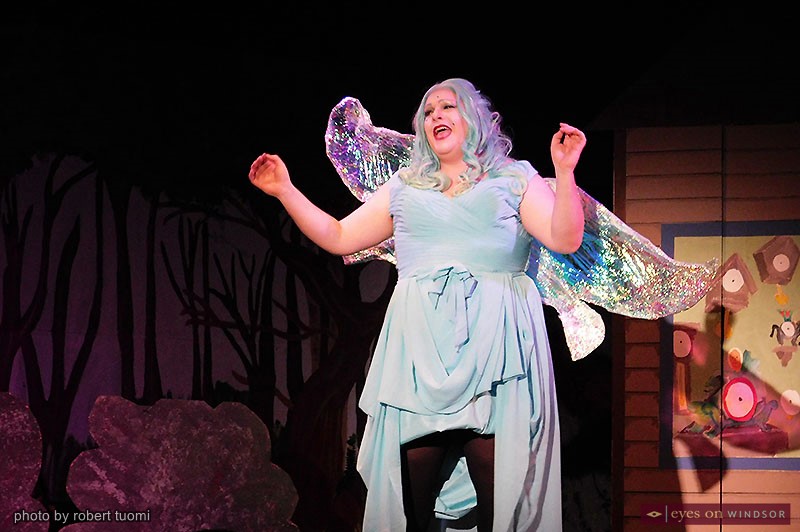 In Korda Artistic Productions’ Pinocchio, Chris Fazekas playing the feminine role of the Turquoise Fairy was a crowd pleaser at Kordazone Theatre on Dec. 6, 2018. Photo by Robert Tuomi.

Certainly the audience is not restricted in being involved in the play. It is designed with considerable audience interactivity with Fazekas being bold enough to go right into the audience to deliver some darn good and funny lines. 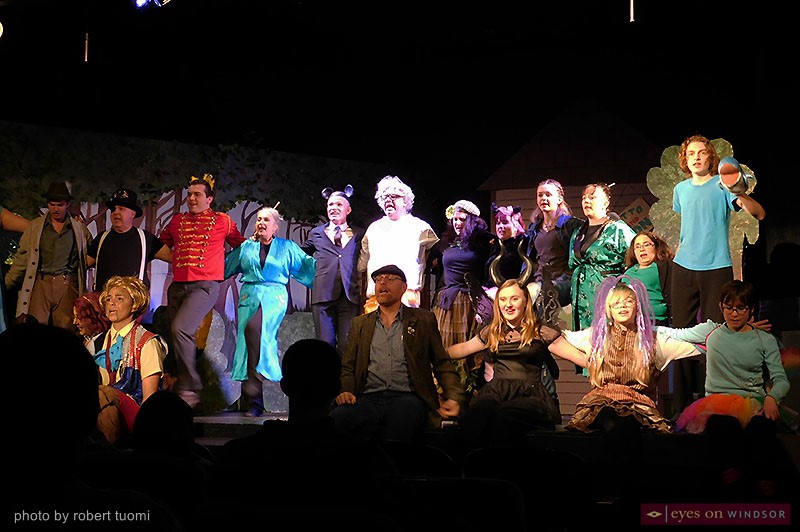 Korda Artistic Productions’ Pinocchio, No Strings Attached, ended with a musical finale involving the whole cast at Kordazone Theatre in Windsor, ON, on Dec. 6, 2018. Photo by Robert Tuomi. 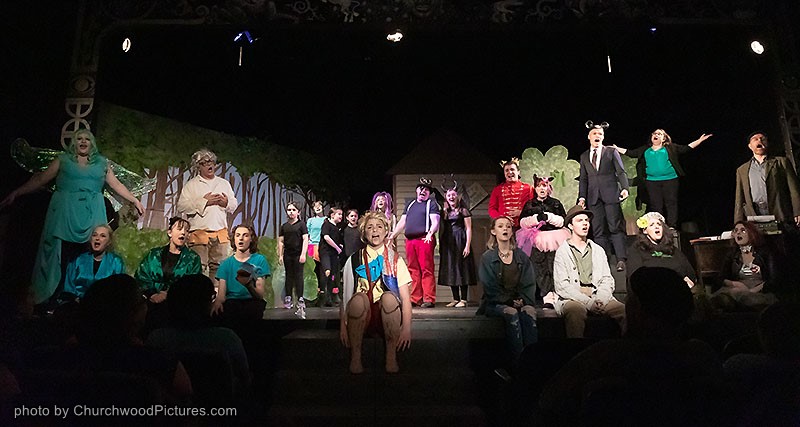 Korda Artistic Productions’ Pinocchio, No Strings Attached, cast perform the final scene as part of their curtain call at Kordazone Theatre in Windsor, ON, on Dec. 6, 2018. Photo courtesy of ChurchwoodPictures.com.

The twenty actor, two-act play will continue at the KordaZone Theatre, 2520 Seminole Street, with the curtain opening at 7pm Friday, December 7 and Saturday December 8 and then at 2pm for a Sunday matinee December 9. Next weekend it will run Thursday, Friday and Saturday at 7pm with a closing matinee Sunday at 2pm.

Tickets are $15 general admission, online at Eventbrite, or at the door if available. Other pricing has seniors at $12, students at $10 and a family 4-pack at $40.

Music is by Robert Godden and Colin Zorzit performed by an in-house orchestra featuring Zorzit on the piano, Godden on guitar, David Light on Bass and Aaron Gasparini on the cajón, a box-shaped percussion instrument originally from Peru.

Director is Toni Bruner aided by assistant Graeme Wachna with technical direction the effort of Michael and Angelica Haggert.

Details can also be found in the Pinocchio No Strings Attached event listing on the Eyes On Windsor events calendar and at http://kordazone.com

Some Photos Courtesy of Churchwood Pictures

Churchwood Pictures is a photography, video, and image editing service in Windsor, Ontario, owned and operated by Carly Morrison-Hart and Martin Ouellette. For more information visit https://churchwoodpictures.com or visit the Churchwood Pictures Facebook Page where you can find the full gallery of photos they shot of Korda’s Pinocchio.