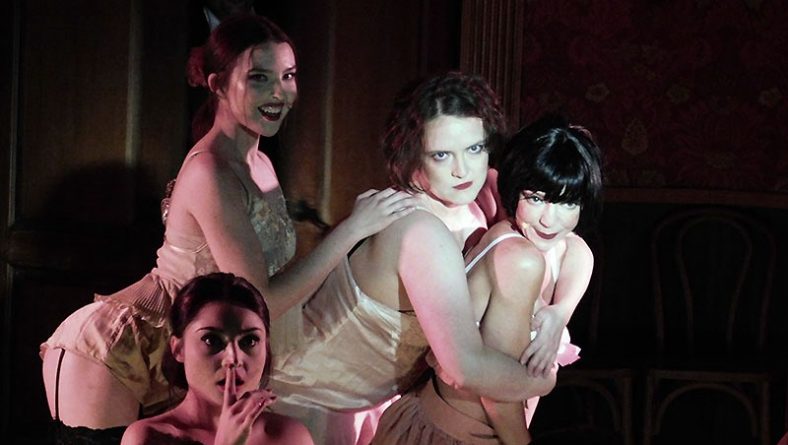 (The Kit Kat Cabaret dancers gather around singer Sally Bowles in Korda Artistic Productions’ opening night of Cabaret The Musical at Kordazone Theatre on Feb. 14, 2019. Photo above by Robert Tuomi / Eyes On Windsor.)

Cabaret, based on Joe Masteroff’s book, has an overabundance of admirably executed joyous singing and dancing, often set to the infectious music augmented with heavy hand slapping percussion of a certain cabaret in pre-war Weimar Germany. It is this veneer that covers a surging rise of the Third Reich that makes the play so intriguing. Director Andres Hausman exhibits nothing but brilliance as he subtly brings out the dark and the lightness in very appropriate doses to reflect the times in Korda Artistic Productions’ Cabaret at the Kordazone Theatre.

Most impressive, without argument, is the dancing and frolicking of the five best suggestively sensual Cabaret dancers in the city: Bailey Souliere, Christine Collins, Kyra Scarlett, Meghan Leigh Eyre and Alex Hristoff. Collectively they set an uplifting tone completely devoid of hints of the repression to come when in fact the dancers are fully representative of that repression. 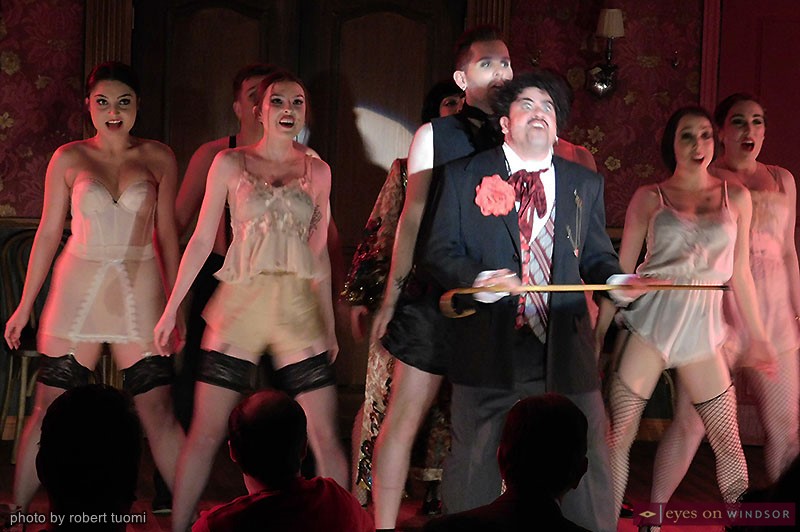 EmCee Will Licari takes his position in front of the chorus line in Korda Artistic Productions’ Cabaret at Kordazone Theatre on Feb. 14, 2019. Photo by Robert Tuomi / Eyes On Windsor.

There is much to compare the gaiety of Cabaret to that of Leon Claxton’s famed revue Harlem in Havana, a mainstay in North America’s circus circuit in the 1950s and 1960s. This is a point Andrea Hausman, Director of Windsor’s version of Cabaret, touches on in her program notes. The scriptwriters, she points out, of the original Cabaret theatrical performance of 1966 “were thinking of the civil rights movement of the time. It was not meant as an ‘historical’ play, but a musical with relevance to the struggles and conflicts of their time.”

Such is precisely the situation with Paxton’s girls, free to dance but with few other liberties in a discriminating America. In Cabaret, the subtle rise of discrimination, particularly against Jews, is poignant in one of the play’s significant story arches. Landlady Fraulein Schneider, played with a certain sparkle by Tracey Atin which she meticulously extinguishes as circumstances change and, fearing the worst, ends her engagement to Jewish green grocer Herr Schultz. 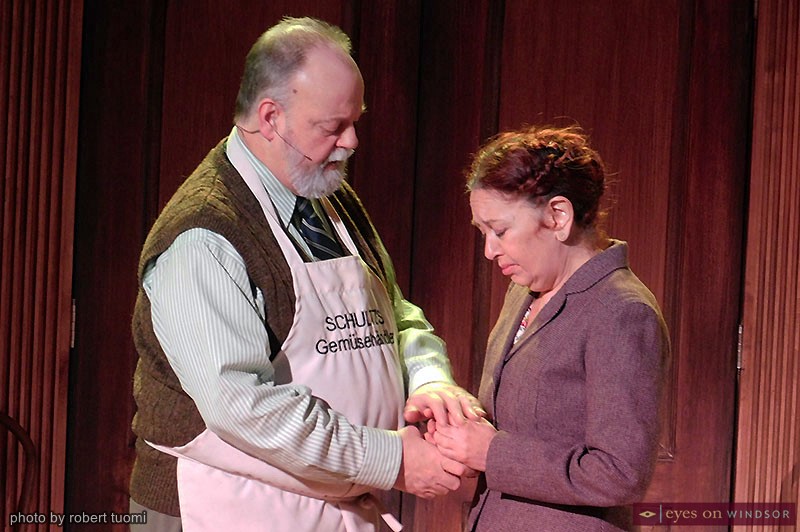 Her beau valiantly, played with such humility by Jeff Marontate, argues his case for marital union by asking Schneider to calculate the number of nights she has dined alone. He thinks maybe five thousand, she settles in on twenty thousand. Despite the prospects of spending their golden years together, Schneider elects to continue to dine alone. 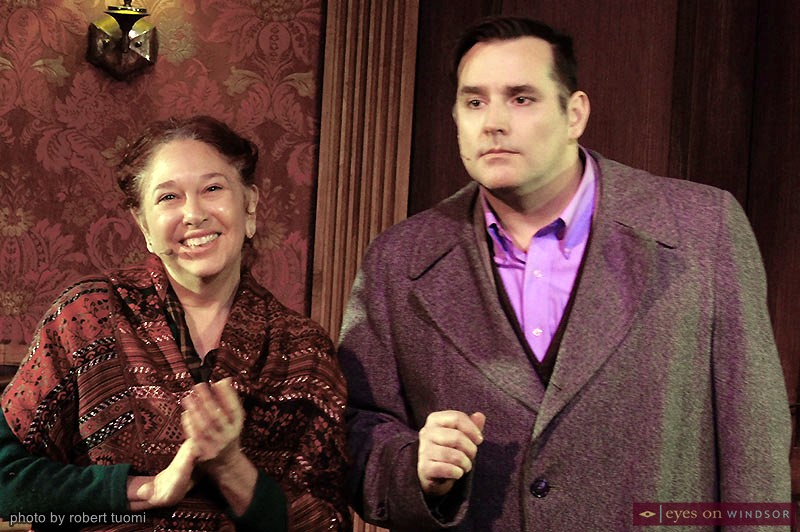 In the main storyline, Director Hausman succeeds so well in presenting two very conflicted characters so at odds with reality and so stuck in the glitz and glamour of unfulfilled dreams in an artificial world. Both are imports from elsewhere. The Jon Hamm lookalike Martin Ouellette is an admirable choice to play drifter Cliff Bradshaw. The penniless wannabe author moves about Europe under the guise of writing a novel, getting by on cheques sent from his mother in Pennsylvania. 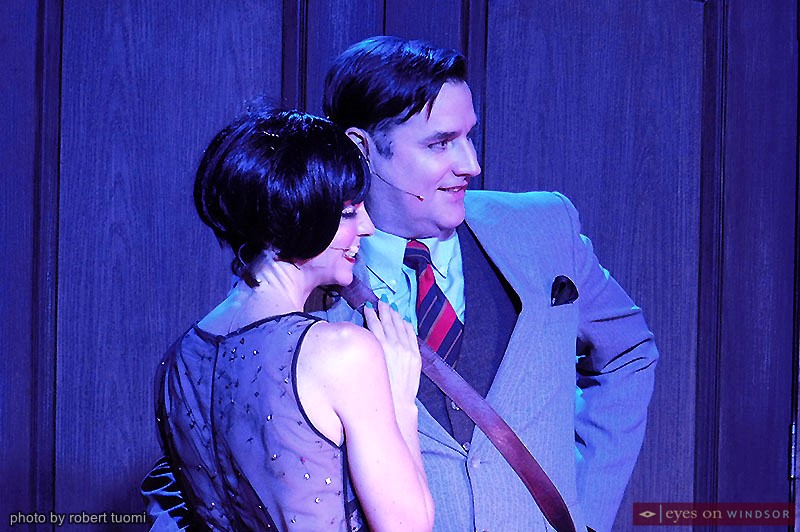 Sitting in the Kit Kat the phone on his table, each table has one, rings. On the other end, from another table in the place, is the unremarkable singer and dancer, Sally Bowles, from England. It is a role acted with total zest and effervescence by the remarkable Heather Hausman who actually can sing and dance. 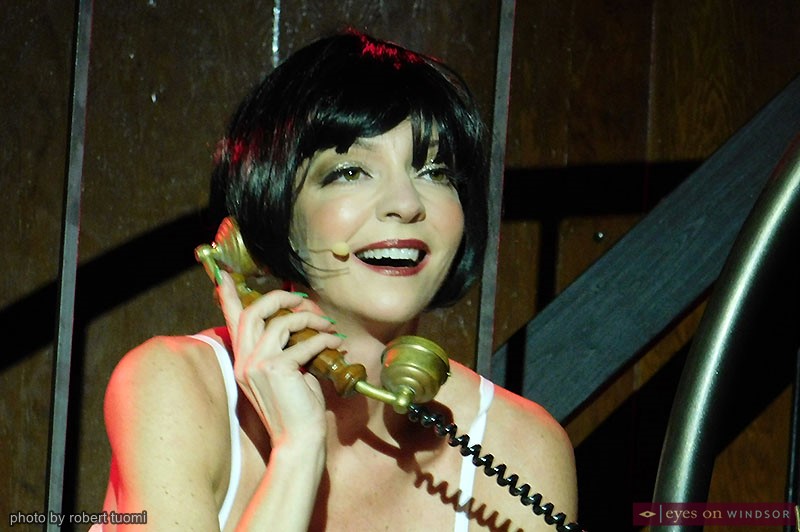 Opposites attract. But for Bowles, she is attracted by opposites almost on a daily basis. That she nests with Bradshaw is not much of a coincidence, he is just a man in a bar. However as the relationship appears to blossom it is not destined for greatness. Bradshaw, as thick as he is – acted so convincingly by Ouellette – actually thinks settling down with the slender Bowles is the exact panacea he needs to truly get busy writing his novel. This, of course, is not to say there is no passion in their relationship, there is enough to keep Windsor’s aptly named Ouellette Avenue brightly lit for months, which makes for a good story somewhat akin to the Days of Wine and Roses.

Ernst Ludvig, played by the delightfully stern Jeff Wilkinson, serves as sort of German mentor and financier to Bradshaw. He not only lines him up with students for his English language teaching business but also pays him to be an American in Paris picking up brief cases. While what they contain remains a mystery, it is clear Ludvig is a resident Nazi and is the real reason Schneider and Schultz part ways. 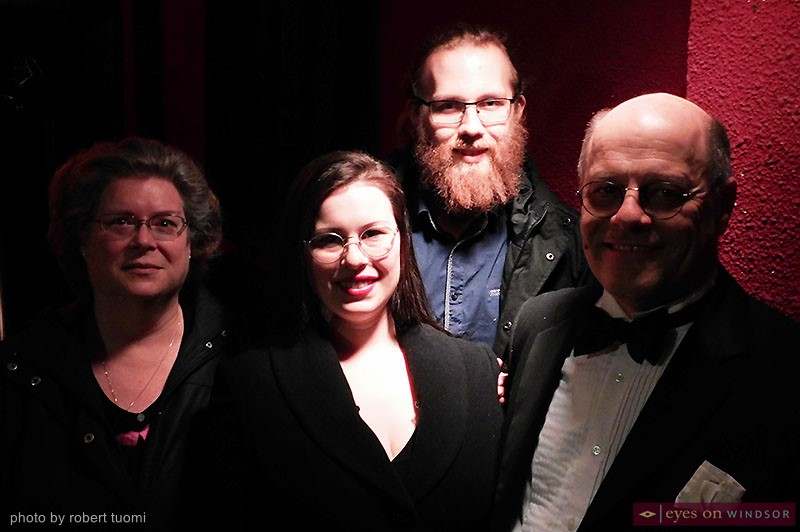 Jeff Wilkinson (right) with his wife, daughter and son-in-law after performing in Korda Artistic Productions’ Cabaret at the Kordazone Theatre on Feb. 14, 2019. Photo by Robert Tuomi / Eyes On Windsor.

Wilkinson, tells Eyes on Windsor, there is certain value in the play, even its mostly dark corners if only to ensure history never repeats. For him, history is actually sort of repeating. This is his return to the stage after a 36 year absence. He is, he admits, a sort of accidental actor. His daughter was asked to consider trying for the role of chanteuse. Instead, hearing of the play, she suggests her father would be good as Ludvig. When he made the decision to give it a go, it was late of night, but now after four months of strenuous and highly productive rehearsals, he is beaming with the results. 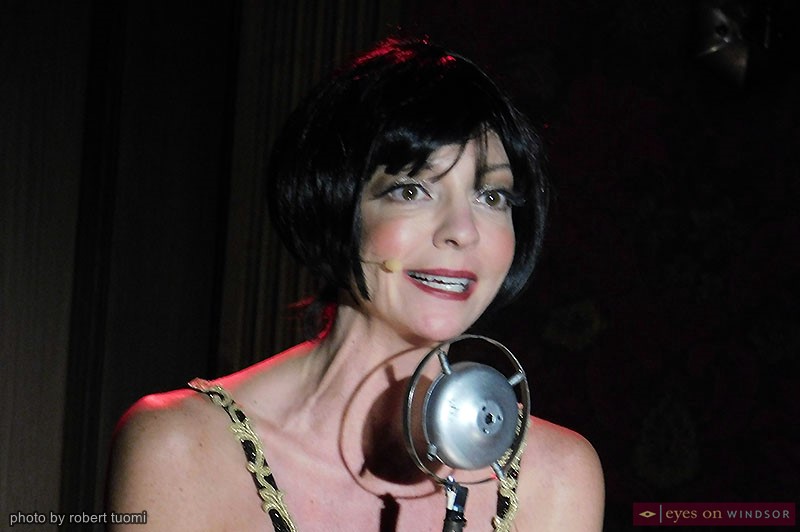 Heather Hausman cast as Sally Bowles does one last number at the Kit Kat Cabaret in Korda Artistic Productions’ Cabaret at the Kordazone Theatre on Feb. 14, 2019. Photo by Robert Tuomi / Eyes On Windsor.

Cabaret is an excellent night of entertainment and not because German music has a way of putting a smile even on smiles turned upside down. It is the superior acting matched with delightful singing and much dancing. There is also the multi-level set designed with meticulous attention to detail by Tony Cyemi. Elevated behind it all is the play’s five piece band under the able direction of Ben Goldstein. Goldstein is also brilliant in the punch ‘em up, knock ‘em down scenes which are acted with nothing but incredible reality. Every aspect is properly pieced together making this a most brilliant evening of entertainment.