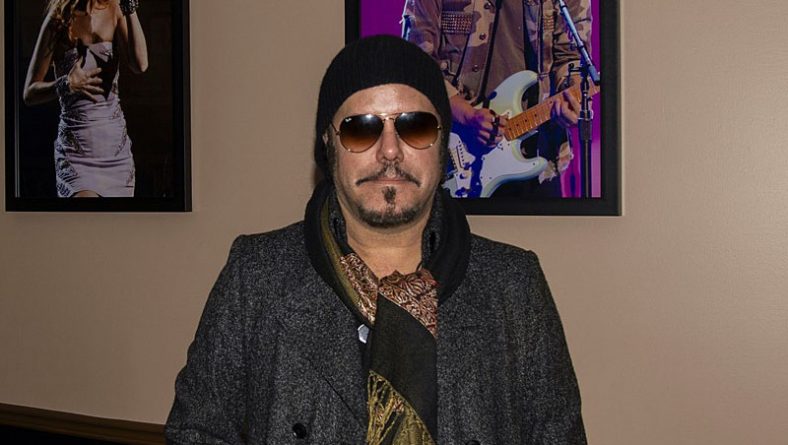 Frontman Jeff Martin, with The Tea Party in the midst of a generational renaissance, took the time to discuss the meaning of “Black River”, it’s rapid chart climbing success, and the upcoming 2019 Black River Tour. Eyes On Windsor sat down with Jeff on Dec. 20, just before his rehearsal for a guest appearance with The S’Aints, the charity band of Tea Party drummer Jeff Burrows. Fresh off his cross Canada solo tour, Martin started out by telling us he was ready to wrap things up and head home to Australia.

Coincidentally, “Black River” has a universal theme that anyone feeling something is calling them back home, after traveling far from it, can relate to.

Martin explained the song as it relates to those touring in the music industry and himself specifically. The song is about “the amount of time you have to be away from home, your loved ones, and things like that, and whether it’s a spiritual thing or a physical thing that’s calling you back home. In my case the home that I lived in, in Australia, it was just Shangri-La, and it’s backed onto this beautiful freshwater river that is fed from the top of this mountain.”

For two weeks Tea Party band members Jeff Burrows and Stuart Chatwood joined Jeff Martin at his home to work on composing “Black River”. During that time heavy rains came down. “It flooded the entire property in Biblical proportions and it was dangerous,” says Martin. “It was going just so fast, and usually it’s a very turquoise crystal clear little swimming hole, that turned into this raging satanic flood. Burrows simply looked outside while we were recording, my studio overlooked the property, and he’s like hey Martin, nice black river you got there. So that was it (how the song was named).”

All three band members put the song together. “Everything that The Tea Party does is a collaboration,” explained Martin. “Usually, 90% of the time I come to the band with a schematic of a song, but what makes it special is that the three of us then take that schematic and we compose it together. For instance the ‘Black River’ guitar riff, I wrote, but then Stuart and Jeff connected the whole bridge, it’s just classic Tea Party, it’s the way we work and we always will.”

That guitar riff Martin is talking about is wicked and draws the listener into “Black River” immediately. And the song keeps the listener hooked all the way through. So it’s no big surprise the just released track is doing well on the music charts. 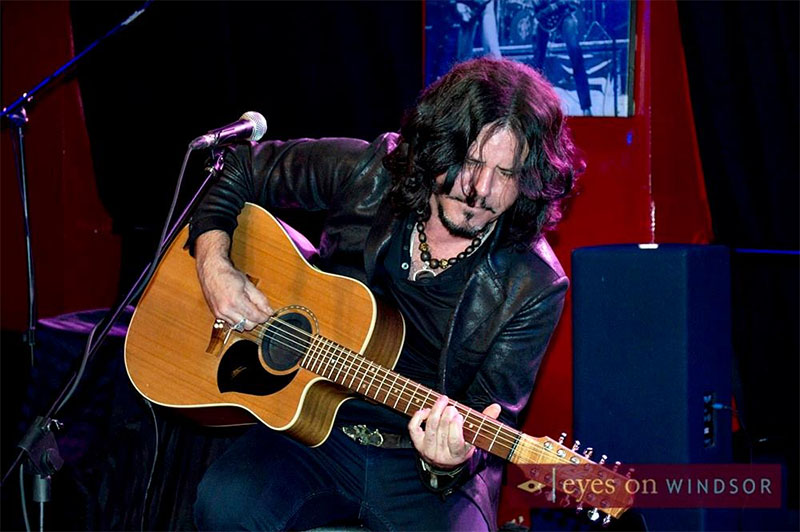 “Black River” debuted in the top 30 and was the most added track to radio station libraries on the Billboard Canada Active and Mainstream Rock Radio charts the week of its release just three short weeks ago.

This week, on the Billboard Canada Rock National Airplay Chart, “Black River” received the “Most Increased Plays” and is the “Most Added” (by radio stations to their library of songs), sitting at #21 (up from #32 last week).

On the latest Billboard Canada Mainstream Rock National Airplay Chart (for the week ending December 16th, 2018) Black River sits at #11, up from #17 the previous week.

Discussing the track’s success on the charts, Martin said, “I’m humbled for sure, and I’m slightly surprised. Then again rock music is making such a resurgence now, that I think it was the right time and place to release that song, and I couldn’t be happier.”

For just over 20 years, The Tea Party has had incredible success, releasing nine albums on major-labels, selling almost 2 million records, and building a legion of fans around the world. Martin referred to The Tea Party as currently being in the midst of a renaissance. “We’ve had such incredible success but now that ‘Black River’ has come along, a new generation is rediscovering Tea Party because of that song.” The new generation of Tea Party fans have a huge discography of incredible music to experience. “It’s an amazing time for the band.”

The band has three or four more new singles lined up for release behind “Black River”. “They’re equally as strong, and they’re different, but they’re still full on Tea Party rock and roll,” says Martin.

“We’ll be eluding to some of the new songs on the tour, we’re not going to give them all away. We can throw flashes of melodies in between the sign posts, there’s certain songs that if we didn’t play live, then there would be a riot. So songs like ‘Sister Awake’, ‘The Bazaar’, and ‘Temptation’ are like sign posts we have to get to in the show, but in between, how we get to those sign posts, well you know who can say.” 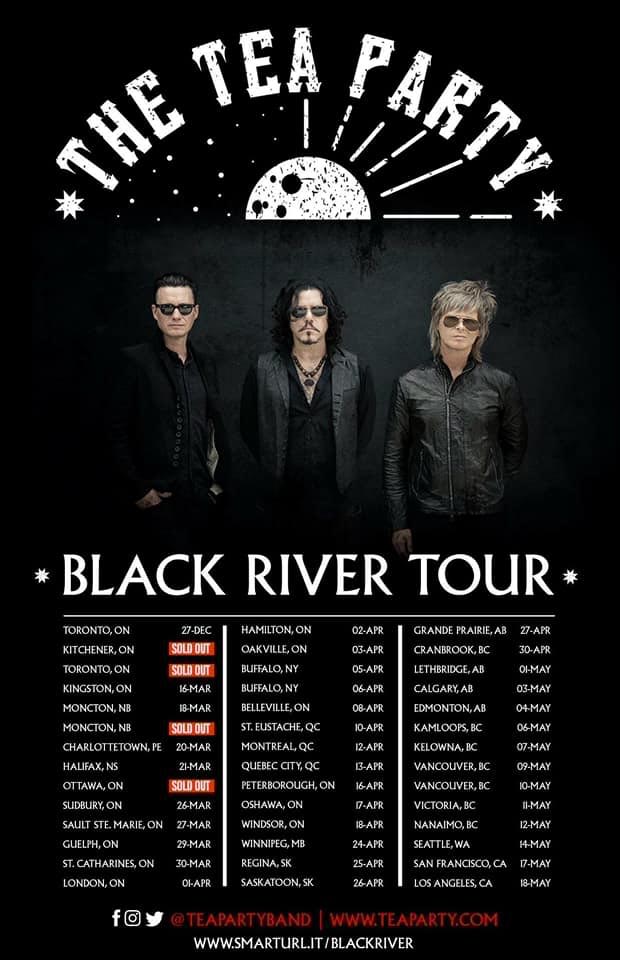 The Tea Party Canadian and US 2019 Black River Tour poster.

While the 2019 Black River Canadian and U.S. Tour officially kicks off on March 16 in Kingston, Ontario, three shows are set to to give fans in Toronto and Kitchener-Waterloo a sneak peek of the show on Dec. 27, 28, and 29. “We’re doing three preview tours just to start firing up the engine, it’s a monster, and I’m looking forward to it,” says Martin.

The highly anticipated tour has already sold out several shows and some new dates have been added in response. It will cross Canada and hit select cities in the United States, wrapping up in Los Angeles, California at The Roxy on May 18.

Tea Party hometown family, friends, and fans will welcome the band when they perform on The Colosseum stage inside Caesars Windsor on Apr. 18. Opening the show will be Windsor natives and fast rising rockers the Autumn Kings.

Tea Party drummer, Jeff Burrows, a well known community champion of nonprofits and charity groups in the Windsor Essex area will be raising funds for them during the Black River Tour through his Drum Tech For A Day experience. For a $1000 donation a fan at each tour stop can take a seat on stage with Jeff Burrows during the concert. Prior to the concert they will assist drum tech David Torbett change the snare head, wrap drumsticks, polish drum shells, and get a photo op with the band on stage. The “Drum Tech For The Day” will also receive signed drumsticks and drum head. For more information or to donate and save a seat email drumtechoftheday@gmail.com 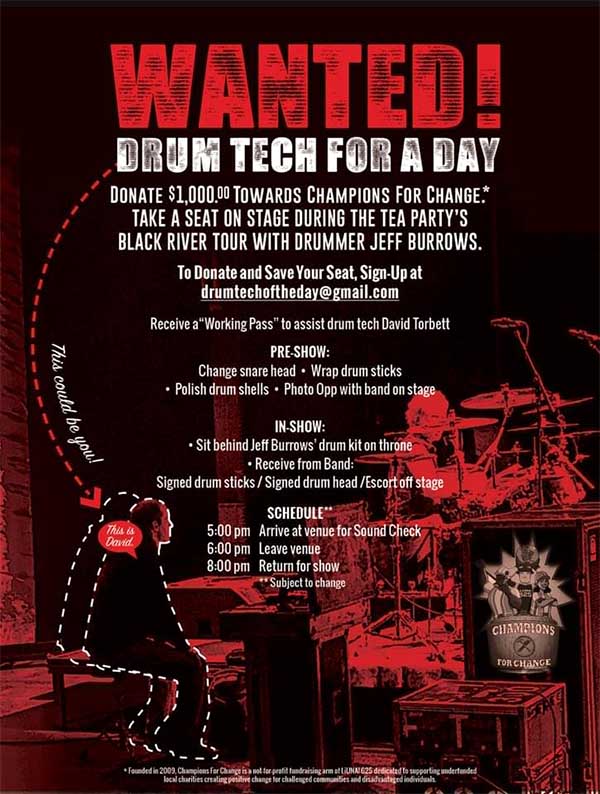 “I came up with the concept about three tours ago,” explains Burrows. “I started doing it for various charities including Transition To Betterness, and St. Clair College.” The program, with all the tour stops, has the potential to raise over $30,000. “That money goes to LiUNA and they will divest that money into the community (with organizations like) the Canadian Mental Health Association Windsor Essex, Harmony in Action, Maryvale, the GEM Foundation, and In Honour of The Ones We Love. All of that stays local here even though we’re touring from East to West and into the States. I’ve done it before and I’ll do it again in Australia and Europe.”

Asked on the spot, Burrows wasn’t sure how many spots are still available. “Before I even put it up I already sold four spots, because people enjoy it so much they want to come and do it again,” Burrows said.

For more information about The Tea Party, including upcoming tour dates visit https://www.teaparty.com