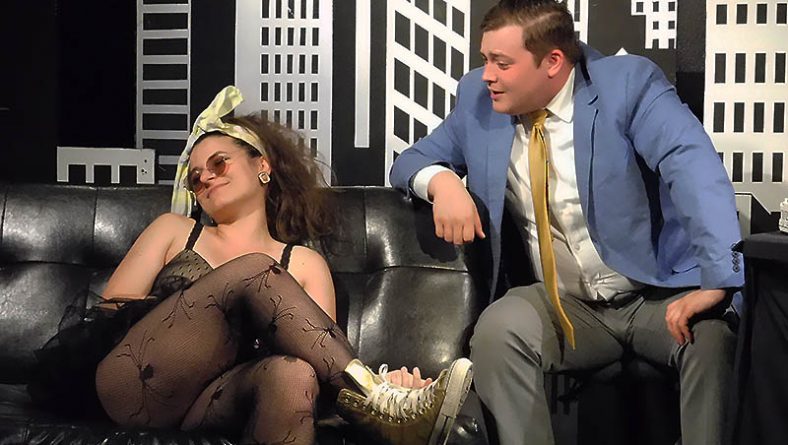 (80s singing sensation Patty (Somerville Black) makes herself at home on Jimmy’s (Eric Branget) couch during a dress rehearsal of Tall Tale Theatre’s production of For The Love of Late Night at Sho Studios on July 18, 2018. Photo above by Robert Tuomi / Eyes On Windsor.)

Never in Canadian television has a late night talk show host lasted decades. Not even the likes of a Peter Gzowski or even a Mike Bullard. But what would happen if a talk jockey did last that long? For the Love of Late Night, now playing at Walkerville’s Sho Studios, 628 Monmouth Rd., fills in the blanks.

Protagonist Jimmy McCrae, played with total authenticity by Eric Branget, starts off on a high note, in the Diefenbaker years no less. Quickly he is the undisputed king of Canada’s late night. Basically, without giving away the plot, things collapse from there, but it takes decades. 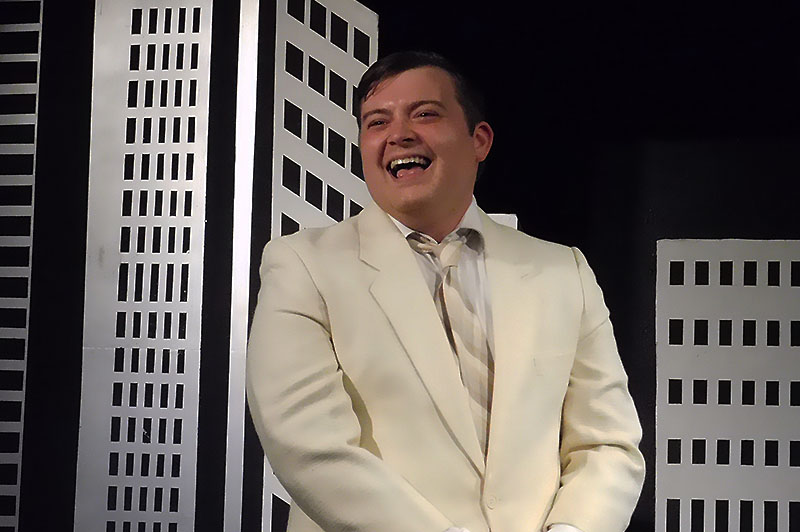 The affable Jimmy McCrae (played by Eric Branget) is Canada’s national treasure of a late night talk show host in the production of For The Love of Late Night. Photo by Robert Tuomi / Eyes On Windsor.

Affable McCrae’s signature quote is “a ring a ding,” which, for effect, corresponds with his hitting a common hotel desk call bell. Such sound props were all the fashion of kooky big city radio disk jockeys of the day. Despite being dated, McCrae never stops hitting it and saying his patented line, until his final act when he frustratingly shouts, “a ring, a goddam ring.”

Such a comment is rather tame to the language he starts using as time moves on, often drawing from the late comedian George Carlin’s list of seven words unspeakable on television.

Playright Michael J. Krym has an uncanny ability to cobble together an economy of words and props to mirror the passage of time as McCrae heads to his fall from grace. Often the ways are humorous. No spoilers here, except to say there are many, attendees might want to keep track. 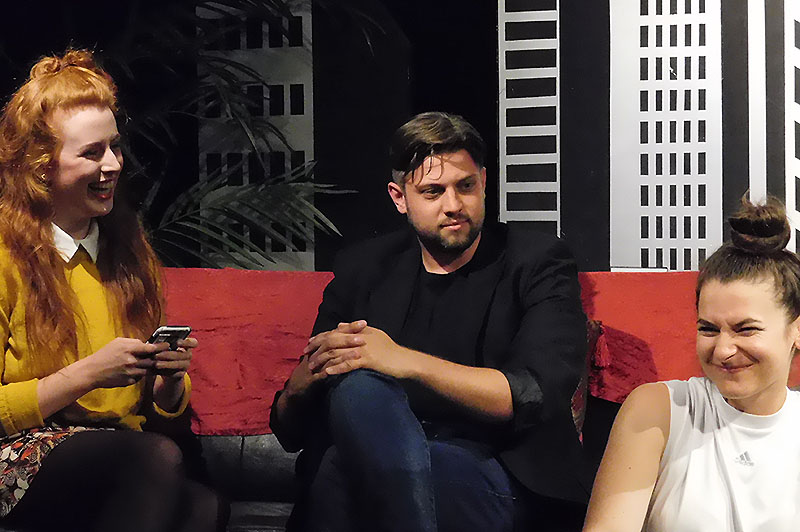 During Tall Tale Theatre Co.’s For The Love of Late Night, movie star Damian Marlow is comfortable sitting between dippy Kiki (left) and her aging alter ego Patricia, but not for long. Photo by Robert Tuomi / Eyes On Windsor.

Energy is high and the play moves rapidly from decade to decade. It is already the eighties when pop diva Patty arrives on the show. She has yet to find a couch unsuitable for striking a suggestive pose. This, and the strategically placed holes in her hooker hose, provides the sexual attraction late night shows thrive on.

Actor Somerville Black brilliantly plays the role adeptly toning down her enthusiasm as her character slides into more respectable attire in subsequent appearances. She also admonishes anyone who calls her Patty, she is now Patricia, akin to Alanis’ transformation into Alanis Morrisette.

One of the play’s many sub-plots is the hatred that reaches a boiling point between yesterday’s news Patty, I mean, Patricia, and Kiki, a YouTube “phenom.” Both are guests on McCrae’s career ending performance. Shannon Pitre instinctively plays up the dippy nature of the vacuous now generation star whose main cause is, “girls against girls who are against girls.”

By this time the self-absorbed McCrae whines about Kiki being, “a fifth of my age and you probably make more than four times my salary.” 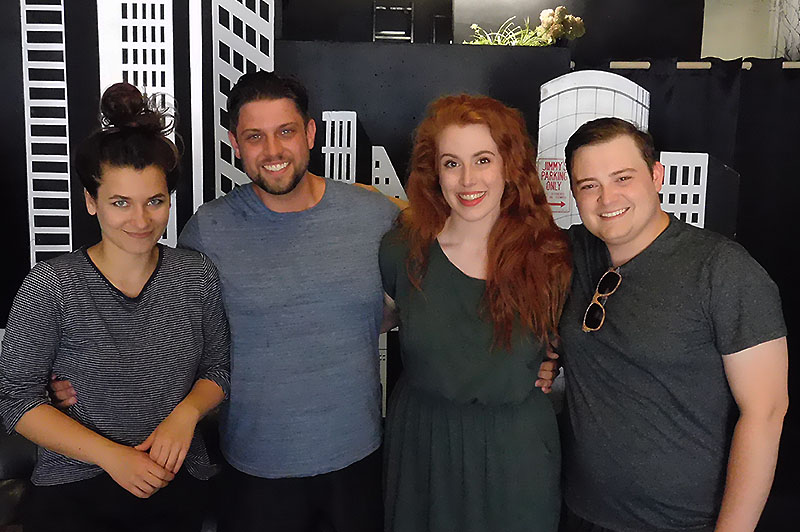 The cast of Tall Tale Theatre’s For The Love of Late Night, from left, Somerville Black (as Patricia Clark), Kyle Arthur Kimmerly (as Damian Marlow), Shannon Pitre (as Kiki) and Eric Branget (as Jimmy McCrae). Photo by Robert Tuomi / Eyes On Windsor.

Krym has concocted just the right brew of perfect telegraphing aided by impending anticipation of the fireworks that ends it all. Self-absorbed McCrae is not one to notice until war breaks out. Not to say that he isn’t observed spiking his own cup of water with something from a flask, most likely not peppermint.

Acting in such an intimate theatre as the Sho places a real and present challenge on the actors to fully express with precise accuracy the moods of their characters. Nowhere is this more evident than in the fire spewing anger of philosophical three-time Oscar nominee Damian Marlow. Kyle Arthur Kimmerly took on the role and is able to turn his pretty boy face just the right colour of agitated red.

Oddly enough Krym told Eyes on Windsor he doesn’t normally watch late night television. He overcame the handicap by diligently keeping an eye on what current hosts are doing – including having McCrae bring in a game akin to the methods of Jimmy Fallon – but also watching tapes of Johnny Carson’s Tonight Show broadcasts with a particular interest in the on-air dust-ups.

As the end approaches, of the play and McCrae, the comedy merges on air and off air leaving the audience to wonder if this is what really happens on the big talk shows when the commercials are on. It is up to them to decide if For the Love of Late Night is life imitating art or art imitating life. 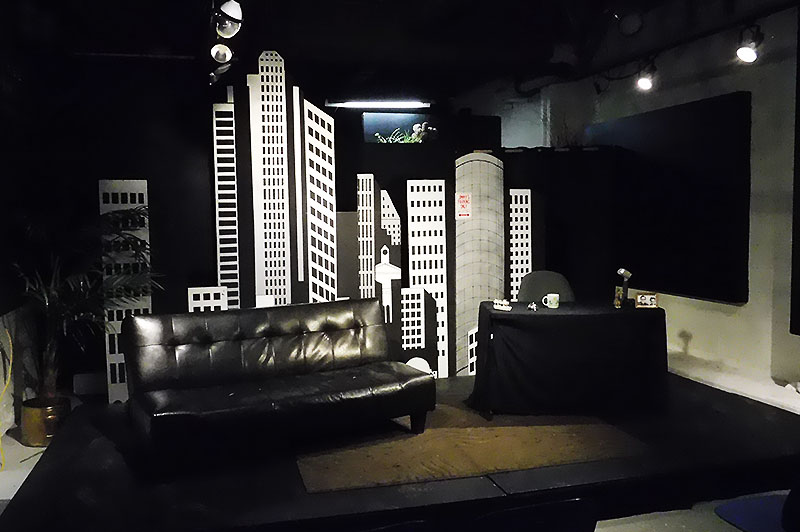 Jimmy McCrae’s on-air set is the backdrop for the play, For The Love of Late Night, with the audience playing the role of his audience. Photo by Robert Tuomi / Eyes On Windsor.

This is the first showing of the play in Windsor, ending a road trip which started in May with stops in places like Toronto. The play is produced by the Tall Tale Theatre Company presented by Sho Art, Spirit and Performance.

For more information please visit the Eyes On Windsor For The Love of Late Night event page.