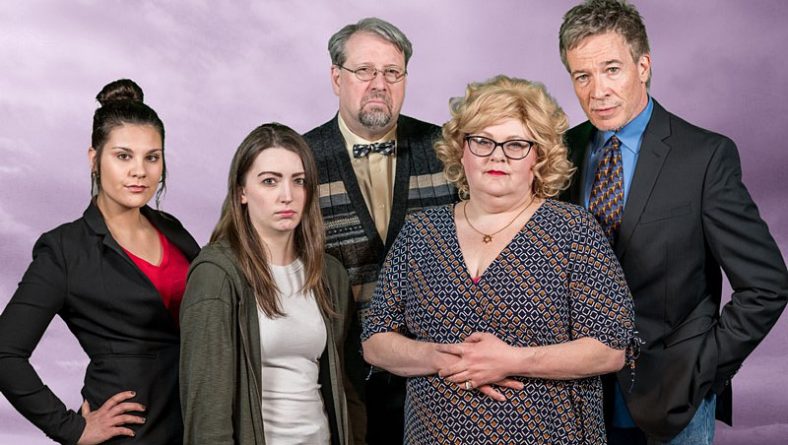 (The cast of Post Productions presentation of Eve Lederman’s Nothing But The Truth. From left Shayna Reiss as Carmen Garcia, Jessie Gurniak as Rachel Klein, Joey Ouellette as Dr. Jerry Adler, Michele Legere as Marilyn Morganstern, and Paul Salmon as Stan Goldman. Promotional photo above by Headshot Company and Kieran Potter.)

With the release of Finding Neverland, the rise of the #MeToo and #TimesUp movements, and continuing revelations about predatory priests around the world, the time is right for a play that explores the long-term effects of trauma on real human lives.

Nothing But The Truth is inspired by deposition transcripts from a real case. This provocative work lets audiences witness a volatile relationship between a therapist and her patient that has gone from compassionate intimacy to frustrated rage. We see the relationship between Rachel Klein (Jessie Gurniak) and Dr. Marilyn Morgenstern (Michele Legere) develop – and we see the aftermath, a malpractice case, a restraining order, and even an involuntary stay in the psych ward. As Lederman said in a recent interview, “The story is about therapy, betrayal and the blurry line between obsession and love as told through the warped lens of the court system”.

Representing real lives requires listening to real voices. As director Fay Lynn explains, the cast – which also includes Paul Salmon, Shayna Reiss, and Joey Ouellette – “has been doing research on their own to bring their characters to life. They take direction while also offering good suggestions. It’s been a very collaborative process. There are many voices in the room and everyone is heard, although in the end the decisions are mine”.

A wealth of ideas is important with a script that focuses on a therapy office and a deposition room – two places where normally people just sit across from each other and talk. “The challenge,” says Lynn, “is taking all that inner emotional energy these characters have, the intensity of their feelings, and turning it into some kind of movement without having it look like a choreographed dance. You can tell the difference between movement that’s staged and movement that’s driven by motivation.” 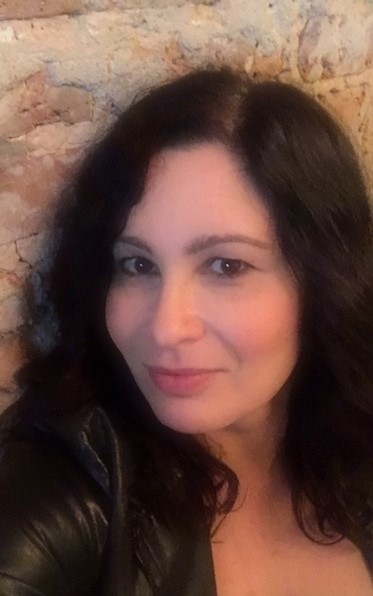 A New York City based playwright, monologist, essayist, and author of a memoir, Eve Lederman’s name is not familiar to the Windsor-Essex theatre audience – yet. With the premiere of her play, Nothing But The Truth, at The Shadowbox Theatre in Windsor, Ontario, people are going to be talking and thinking and arguing about her work in 2019 – and hopefully for many years to come.

The play already has quite a history. It was named a finalist and “highly commended play” in the BBC’s International Playwriting Competition, a finalist for the ScreenCraft Stage Play Competition, and was produced as a radio drama with The Radio Theatre Project. The play has been developed in New York City for several years: it appeared in Theatre for the New City’s Dream Up festival and the T. Schreiber Studio & Theatre’s New Work Project and was also a semi-finalist for Theatre Resources Unlimited’s TRU Voices series, the Urban Stages Development Program, and the Normal Ave Playwriting Series. Elsewhere it has been a semi-finalist in Geva Theatre’s Festival of New Theatre (Rochester, NY), The Phoenix Theatre Festival of New American Theatre, the Theatre Evolve New Works festival (Chicago, IL), and the Bridge Initiative/Women in Theatre contest (Mesa, AZ) – amongst others.

Nothing But The Truth is sure to leave audiences with a lot to think and talk about afterwards – two hallmarks of the Post Productions brand. What is the line between love and obsession? At what point can empathy become a problem? How can trauma affect us in unexpected ways? And most importantly to Lynn, “how some kinds of truth are subjective. So judgment is something to be suspended until the difference between fact or truth on the one hand, and perception or subjective truth on the other hand, can be determined. That isn’t easy”.

Post Productions’ presentation at The Shadowbox Theatre (103B – 1501 Howard Ave, the corner of Howard and Shepherd) will mark the first time Nothing But The Truth has been produced as a stage play with performances on April 19, 20, 25, 26 and 27. All performances begin at 8:00 PM (doors open at 7:30). Tickets can be purchased in advance for $20 at postproductionswindsor.ca, or at the door if available. .

Nothing But The Truth.
Written by Eve Lederman.
Directed by Fay Lynn.
Produced by Michael K. Potter, Fay Lynn, and Michael O’Reilly.

For more information about Nothing But The Truth, including an interview with Eve Lederman and biographies of the cast, head over to the Post Productions blog at postproductionswindsor.ca/blog.