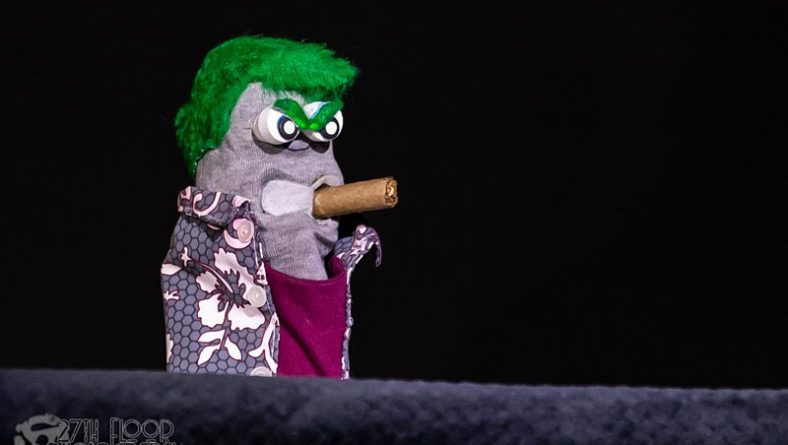 A noticeable flicker of the lights at downtown’s Imperial Night Club Friday evening causes a hush to fill the room. Then, in the prevailing silence, that familiar sarcastic voice wonders out loud. “Why,” says the disembodied voice, “Is everyone so quiet.”

It is a voice that has been silent for almost a decade, but it is true, Ed The Sock was in the house accompanied by the witty and vivacious “ginger,” as she calls herself, Liana K of TV’s Ed & Red. Liana explains the absence from the public spotlight by saying the cigar smoking sock puppet loved by the country over was simply in America making “US bucks,” which are green like his head of hair and worth a lot. 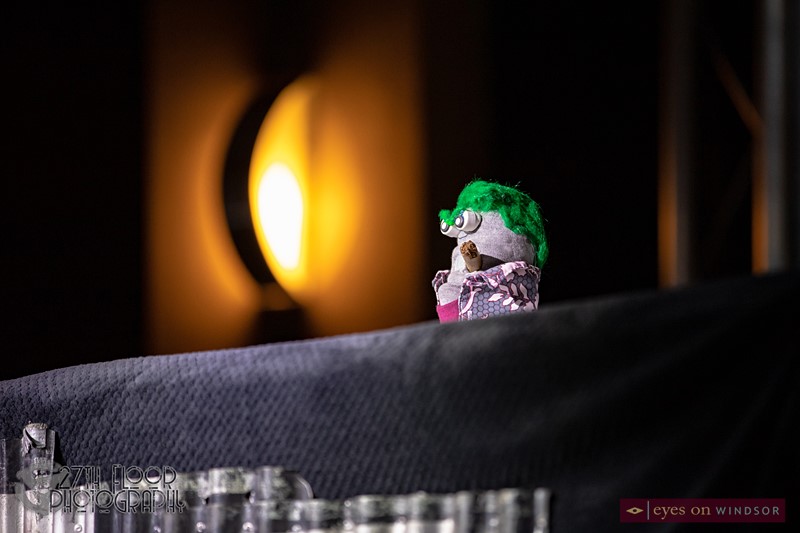 Steven Joel Kerzner as Ed the Sock performing during his War On Stupid tour stop at Imperial in downtown Windsor, Ontario, on March 15, 2019. Photo by Dan Boshart / Eyes On Windsor.

Although Steven Kerzner, the man behind the puppet and under the table, calls his travelling show a War on Stupid, many in the audience had a comforting sigh of relief when he sincerely made sure everyone understood Windsor is not a haven of stupidity, not like Squamish. Apparently, the BC town has the distinction of being the first stop on his tour and what happened to Ed caused him to politely calculate about the town’s name being a single letter away from squeamish. It turns out, to his consternation, Squamishians are not only stupid but also called the poor knitted entertainer an “angry foot condom.”

Ed confessed that when he left the rare air of television broadcasting, he was pretty confident he had provided good guidance and easy to follow instructions on how society could function in his absence. To say the least, he is disappointed in what has transpired. “Look at what you’ve done with the place.” 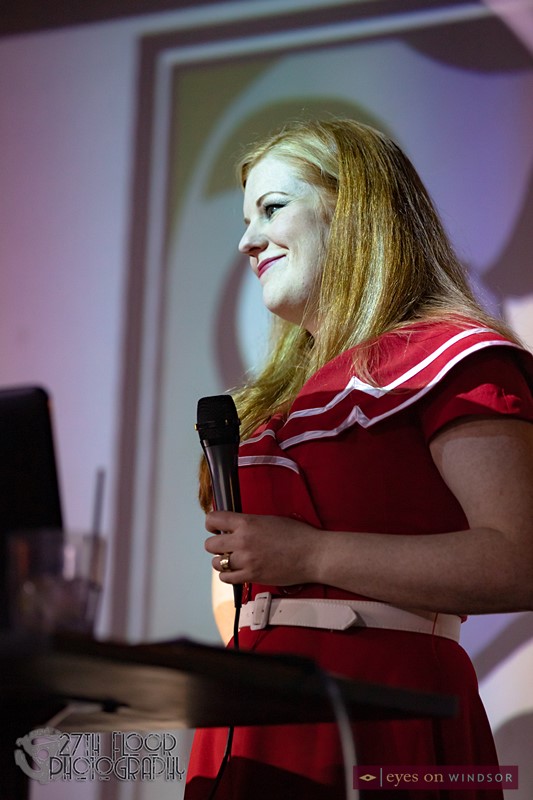 Liana Kerzner (Liana K) performing during the Ed The Sock War On Stupid tour stop at Imperial in downtown Windsor, Ontario, on March 15, 2019. Photo by Dan Boshart / Eyes On Windsor.

From this point he moves hilariously into what he and Liana do best, being politically incorrect. If there is one thing about being so, it is the allowance it gives Ed to point out the absurdities of everyday life. Mind you, much of what he says is heard daily in the Tim Horton coffee shops across the land but Ed dunks his doughnuts with considerable philosophy. So much so he has the audience looking up with that, “you know, he is so on” look, at least when they can pause from laughing hysterically. 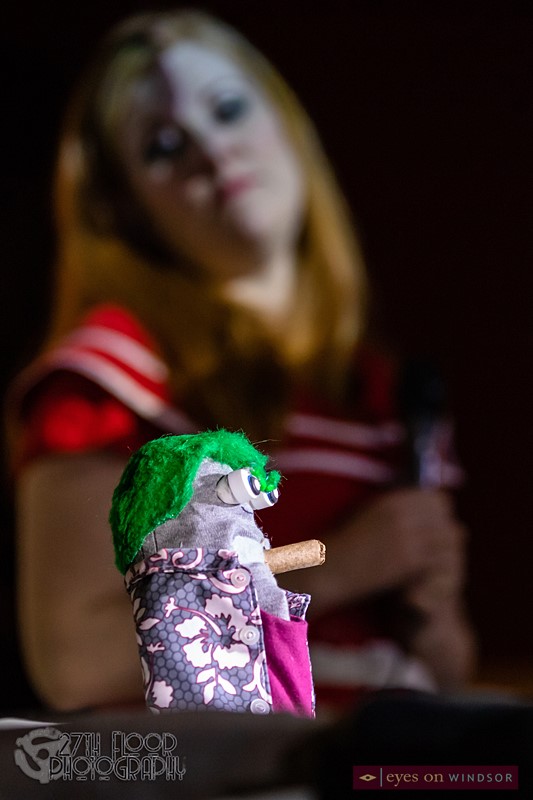 Steven Joel Kerzner as Ed the Sock performing during his War On Stupid tour stop at Imperial in downtown Windsor, Ontario, on March 15, 2019. Photo by Dan Boshart / Eyes On Windsor.

It is at this point that Liana K begins a piece she wrote called Everyday Signs of Stupid. She starts listing some of the most insanely inane things humans do to each other. Like plastic wrap on rock solid cucumbers while soft and tender tomatoes are sold with no wrappings whatsoever. Then there is the Grapple package with a purple monkey on a skateboard, or the idea IKEA has foisted on an unsuspecting public of offering to send someone over to assemble its furniture. The whole idea of buying un-assembled furnishings, she rationalizes, is because it is cheaper. The logic is practical. If you really want assembled furniture, just buy assembled furniture. 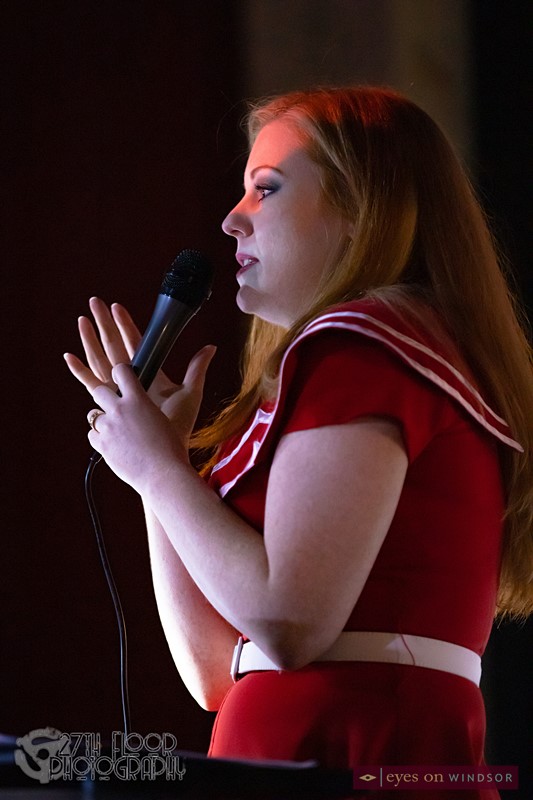 Liana Kerzner (Liana K) performing during the Ed The Sock War On Stupid tour stop at Imperial in downtown Windsor, Ontario, on March 15, 2019. Photo by Dan Boshart / Eyes On Windsor.

As the evening ran its course, Ed got more and more un-politically correct, saying things that even he admitted are not for public disclosure, even to delivering jokes no longer allowed on television. Although most would not meet Eye on Windsor’s standards, there was one that might be printable, if the name of the country implicated was removed.

There is apparently a country, he reported, now planning to send a manned mission to the Sun. How will they get around its furnace like heat? They plan to land at night. It seems innocuous enough but the real reason he can’t say such a knee slapper on TV is because he used the word “manned.” 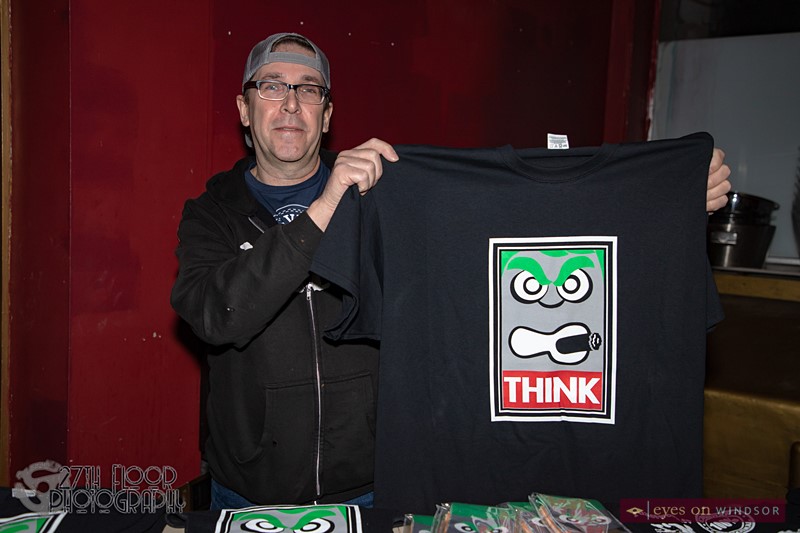 One of the Ed The Sock t-shirts available for purchase during the War On Stupid Tour being held by a gentleman named Gary at Imperial Night Club in Windsor, Ontario, on March 15, 2019.

The message in his almost three-hour long show, and yes he has one, is about comedy being a great unifier. It humanizes people. It makes them think differently and, in his case, it also makes them laugh their socks off.

Over the years Ed has met some pretty famous people in some pretty not for publication situations, which he gladly exposes. This and so much more are the reason the audience sat spellbound, when not laughing, at a hand puppet. Such is Ed the Sock. And such is the good luck to Canada that he is back.

The one-night visit by Ed and Ginger was presented by Higher Limits and the Imperial. 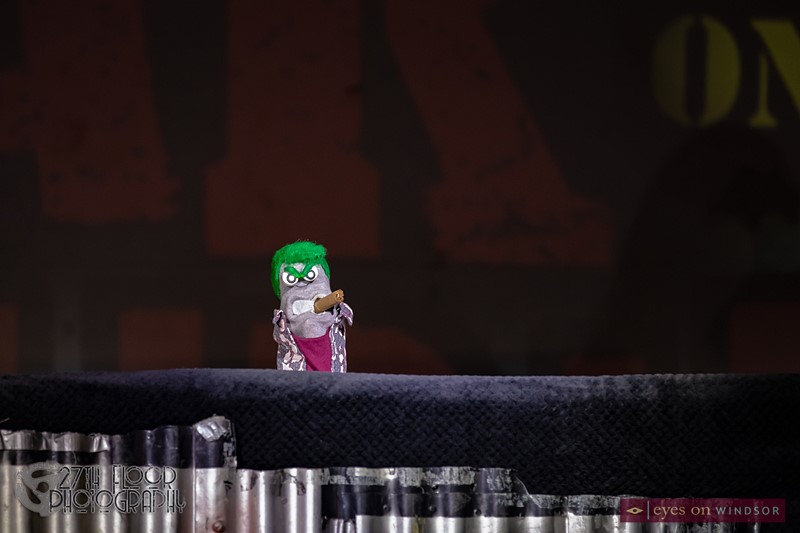 Steven Joel Kerzner as Ed The Sock performing during his War On Stupid tour stop at Imperial in downtown Windsor, Ontario, on March 15, 2019. Photo by Dan Boshart / Eyes On Windsor.