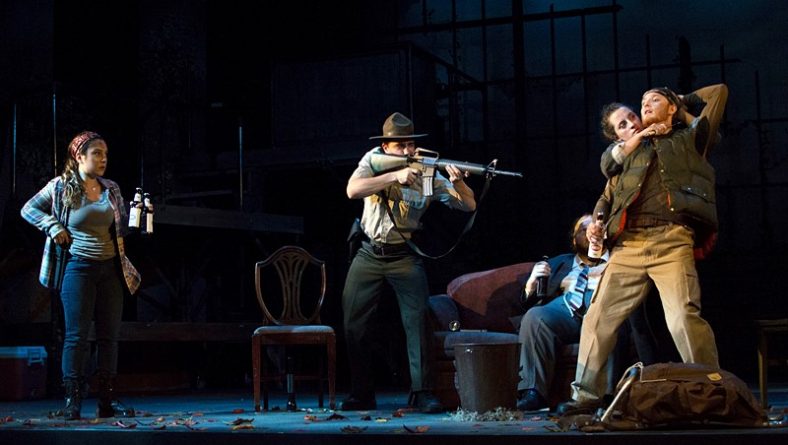 University Players (UP Windsor) open their 60th anniversary season celebration with a return to musical and dramatic storytelling as they present Mr. Burns: A Post-Electric Play by Anne Washburn. Not just for fans of the long-running animated series, The Simpsons, it is a musical tribute to the modern mythology of pop culture and a darkly funny exploration of a post-electric existence. The show opens on Friday, September 21, 2018.

(Cast members of UP Windsor’s production of Mr. Burns, from left to right, Serena Paesano, Sean Sennett, Matt Maddison, Shayla Hudson, and Brady Madsen, during a dress rehearsal for members of the media at the University of Windsor’s Essex Hall Theatre on Tuesday, September 18, 2018. Photo above by Eric Bonnici / Eyes On Windsor.)

Mr. Burns takes place in the near future after an apocalyptic event takes out electricity to the entire world. In this post-apocalyptic world, strangers become allies as they struggle to survive, using shared memories of The Simpsons to connect to one another and find solace in desolation. They recall a favourite episode of the Simpsons, and unknowingly create the stories which will become the historic legends of a new era.

In an interview with Eyes On Windsor, director Lezlie Wade said, “There’s a lot to be taken from the piece in terms of the importance of talking to each other and storytelling and dialogue and narratives and what kind of information we want to pass on.”

“I think the audience is going to be really surprised. When people hear it’s called Mr. Burns and they know there’s a certain element of the Simpsons in this piece, I think people tend to think it’s going to be really funny. But if you look at the Simpsons as a satirical piece, as something that’s subversive and has a lot of messages to it that aren’t hilariously funny, like the prediction of Donald Trump being president, you’ll find that the show is quite sobering.”

Lezlie is a theatre director, lyricist, playwright, and actor who began her career studying at the University of Windsor and then The Neighborhood Playhouse School of the Theatre in New York and George Brown Theatre School. She has worked as a director on more than eighty professional productions including Canadian Premieres of Lanford Wilson’s Book of Days, Dog Sees God, Elegies and A Man of No Importance for which she received a Dora Nomination for Best Director of a Musical. Lezlie also directed at the Shaw Festival. Lezlie returns to University Players after directing last year’s production of Les Belles Soeurs. She is notably directing in her 6th Stratford Festival season, where her production of An Ideal Husband runs through October.

Lezlie says, “this is my third season (directing at UP Windsor), Mr. Burns is a very challenging play, and there’s a lot of elements in this play, I did Les Belles Soeurs here last year which was pretty straight forward, but this show has masks, sword fighting, puppetry, deck singing, and dancing, it’s got a whole bunch of elements, so it’s a real process trying to put it all together, but the cast is doing a really great job.” 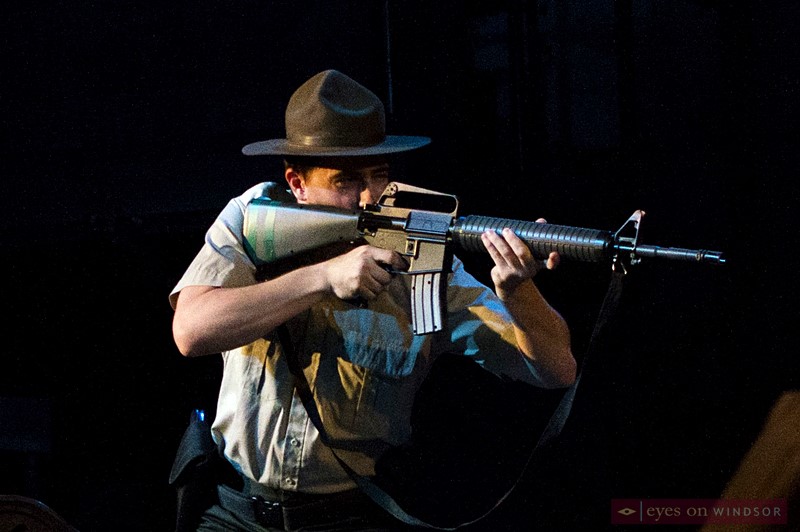 Cast member of UP Windsor’s production of Mr. Burns, Sean Sennett, who has been cast as Sam, Bart, and Skinner, during a dress rehearsal for members of the media at Essex Hall Theatre on Tuesday, September 18, 2018. Photo by Eric Bonnici / Eyes On Windsor.

“Lezlie Wade and all her expectations are really high and we’re there to meet them,” said cast member Sean Sennett. “She’s definitely been around and knows her stuff.” Sean plays the parts of Sam, Bart, and Skinner in the show.

“Everything is going really well and it’s been a wild ride so far. Some of the cast hasn’t done a lot of music theatre, I’ve done quite a bit around here, so getting them up to speed especially with Lezlie’s super high expectations has been a little bit of a push for all of us. Mr. Burns is a show where there’s a lot that happens that nobody expects, so it’s going to be really interesting to see how the audience’s minds change from the first act to the third act. I hope everybody loves this show.”

University Players is a theatre company that features performances by students from the University of Windsor’s School of Dramatic Arts BFA in Acting program and guest directors.

Performances of Mr. Burns take place at Essex Hall Theatre (located on the University of Windsor campus on the corner of Wyandotte and Patricia) on September 21, 22, 23, 26, 27, 28, 29, & 30, 2018. All performances from Wednesday to Saturday start at 8 p.m. and Saturday and Sunday matinee performances are at 2 p.m.

On Sunday, September 23, a “Talk Back” discussion with the actors will follow the performance.

On Wednesday, September 26, University Players will host their popular Let’s Talk Theatre Lunch and Discussion Series at Willistead Manor. This lunch and discussion series event will feature an impressive three-course lunch and entertaining and informative guest speakers discussing the production of Mr. Burns.

Also part of UP Windsor’s 60th Anniversary, they have recently announced an exciting new offer. Fans of University Players can now get a ticket to a Saturday matinee for just $8. The new ticket is called an ACT UP! Ticket – a clever acronym for “Arts Community Tickets to University Players”. Members of the local Arts Community are able to receive a ticket to the Saturday matinee of any University Players show for just $8 by showing some form of proof of involvement in the arts. This can include a pay stub, a business card, a name in a show program, a membership card for any community organization, along with proper ID. In partnership with the Arts Council of Windsor, anyone showing an Arts Council Membership Card is also entitled to an ACT UP! Ticket.

University Players offers 6 shows over the course of the school year. This year in addition to Mr. Burns, the theatre group will produce A Streetcar Named Desire, Journey’s End, The Penelopiad, Love Letters, God of Carnage, and Love And Information.

For more information or to purchase tickets please visit www.universityplayers.com or call the box office at 519-253-3000 x2808.