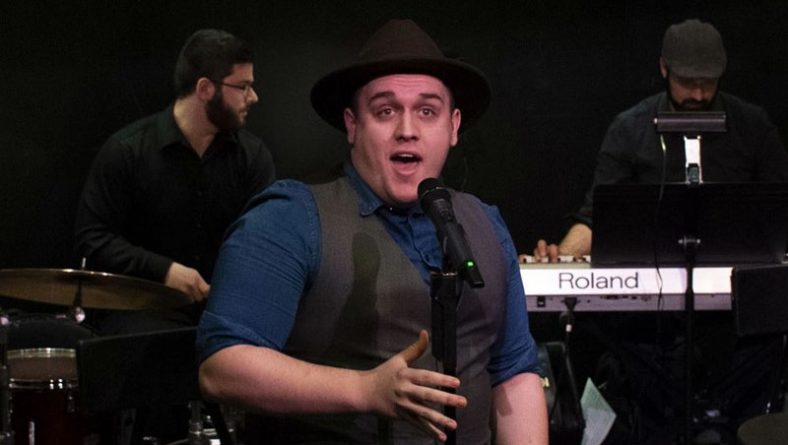 Talented local vocalist, actor, and Windsor’s Raise Your Voice Singing Competition Season 3 Winner, Benjamin Doncom has officially released his debut self-titled four song EP today (March 15). Raise Your Voice Season 4 auditions have wrapped up and the competition rounds will kick off on Monday (March 18). Part of Benjamin’s prize for winning last season included a recording contract with 360 Entertainment (working with Robert Palombo, Walter Riggi, and Kurtis Sasso), and four songs written (which he contributed to heavily) and recorded for his voice, and a music video for the best song. In this case, Benjamin recorded and released his debut single and video in mid February, titled Chasing Ghosts. In addition to this track, the EP dropping today includes Oh Love, Crossfire, and Love for the Sake of Love. 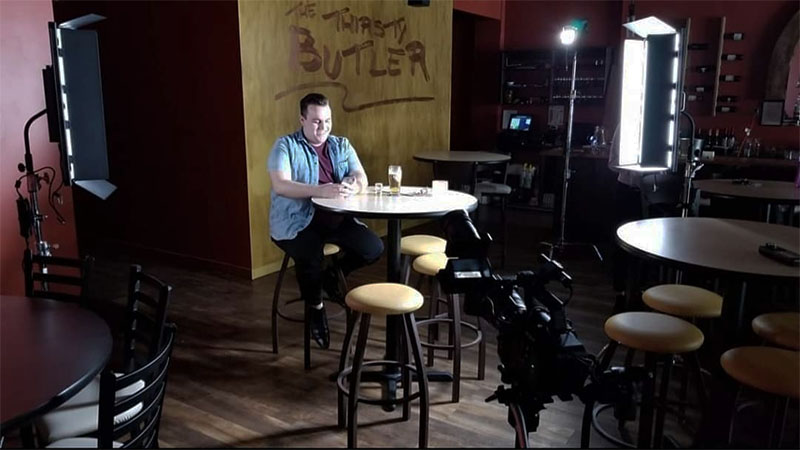 Benjamin Doncom’s vocals and lyrics on the track Chasing Ghosts are fantastic, soulful, and captivating. The music composition, with Mario Gualtieri on guitar, pulls the song together nicely. The song, as Benjamin explains in a Facebook video he posted, is about getting “ghosted.” Ghosting is when someone suddenly stops all communication with another, in modern times that’s mainly through texting and on social media, particularly in a romantic relationship. “It’s a pretty crappy feeling to be ghosted because there’s no sort of closure as to why they stopped contacting you,” explains Doncom. He wrote the song hoping to share the feeling, so people will reconsider ghosting someone in the future, and also to relate to those who have experienced it. This has happened to him in the past and it took him a while to realize it’s not worth the time, energy, and effect on his mental health, to keep chasing after people. Part of the message behind the song is “we shouldn’t chase after the people that ghost us because if they don’t value us as a person, and they don’t value our time, then we shouldn’t try to get their attention. Sometimes people that ghost, that’s exactly what they want, they want people chasing after them.(and they’re not worth it)” 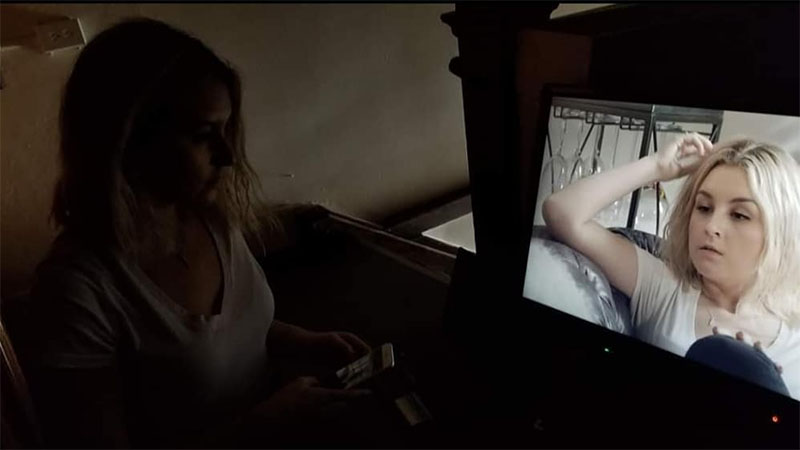 The video was shot in Windsor’s historic Walkerville neighbourhood at the Thirsty Butler. Featured in the video is another talented vocalist and actress, Kaitlyn Karns, who as Benjamin says, is a great friend and constant support. The pair, along with several more emerging young talented vocalists, Sara Fontaine, Nathanael Judah, Florine Ndimubandi, and Michael Roy, are performing tonight (March 16) in the final performance of King of The World – The Songs of Jason Robert Brown, the inaugural show in Windsor’s New Voices Concert Series. Eyes On Windsor caught the first performance last weekend and was blown away. This is a great opportunity to experience Doncom’s voice live (along with the rest of the cast). The performance, a collaboration between 401 Productions and Post Productions Windsor, takes place at Rockstar Music Hall at 7:30pm. 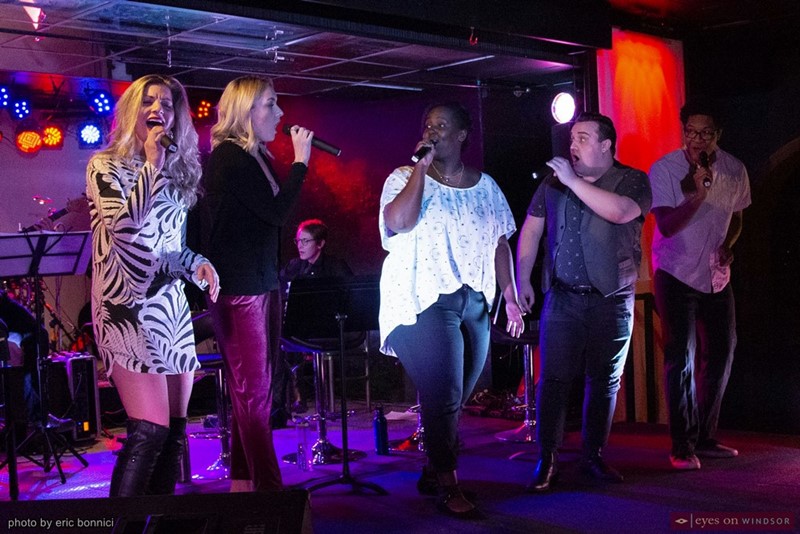 The cast of the inaugural New Voices Concert Series’ King Of The Word, performing State Road 21 from Bridges of Madison County, at Rockstar Music Hall in Windsor, ON, on March 9, 2019. Photo by Eric Bonnici / Eyes On Windsor.

A Kingsville Ontario native, Benjamin Doncom is looking to build his musical career on values that are important to him – positivity, empathy and soul. From an early age Benjamin was exposed to music through his father who listened to the Beatles, the Hollies, Queen as well as some incredible artists from the 50s, 60s and 70s including Frankie Valli and the 4 Seasons, Sam Cooke, Frank Sinatra, The Temptations and Stevie Wonder. These artists fueled an interest in Benjamin to begin singing.

When he was 9 Benjamin joined the church choir and soon after he auditioned for and got a part in the local production of a Christmas Carol. Musicals were also a huge influence on Benjamin, “we grew up watching musical films like Singing in the Rain, White Christmas, Seven Brides for Seven Brothers. I developed a varied taste in music and a love for theatrics and music combined. Which is why I love Queen”. 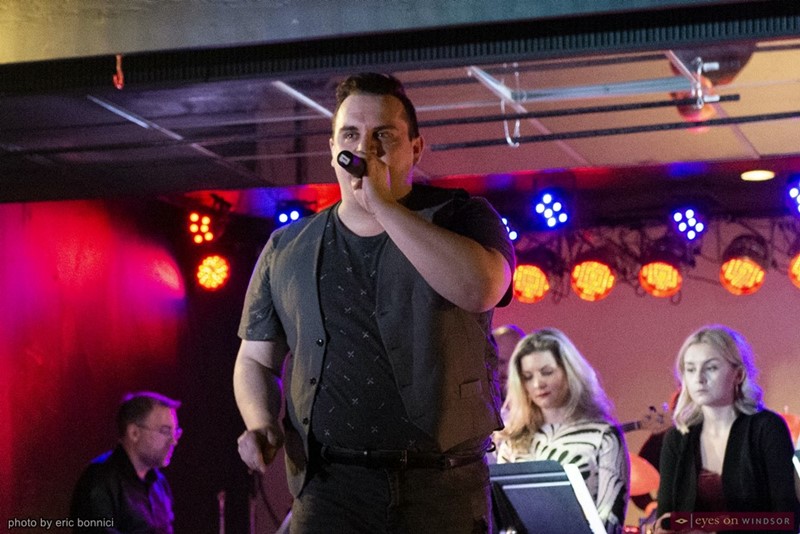 Benjamin Doncom performing King of The World from Songs For A New World during the inaugural New Voices Concert Series at Rockstar Music Hall in Windsor, ON, on March 9, 2019. Photo by Eric Bonnici / Eyes On Windsor.

This combined love of music and theatrics led Benjamin to enroll at Sheridan College where he received an Honours Degree in Musical Theatre Performance. After earning his degree Benjamin kept busy by acting in productions of Les Miserables, West Side Story, Phantom of The Opera and has performed at the World famous Edinburgh Fringe Festival. More recently in the Windsor Essex area he performed in Heathers, and Catch Me If You Can produced by Cardinal Music Productions. 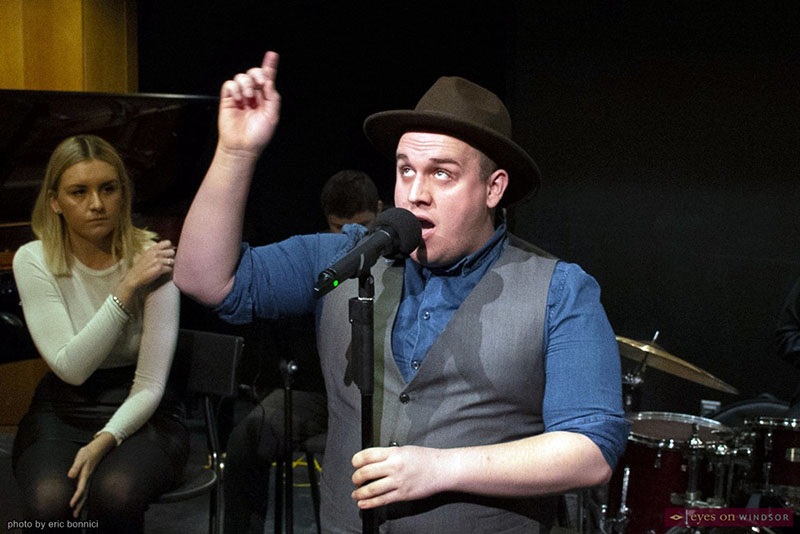 Benjamin Doncom singing during rehearsal of Sam Poole’s graduation project, the production of Songs For A New World, at The University of Windsor School of Creative Arts Armouries Building on Wed. Jan. 30, 2019. Photo by Eric Bonnici / Eyes On Windsor.

In 2018, Benjamin decided to give the music side of his life more attention. Benjamin believes his debut songs represent a modern twist on the soulful sounds of artists he grew up listening to. “We attempted to make the EP have a bit of soul with a touch of pop and rock all
mixed in with a modern sound.”

With the release of his debut EP today Benjamin hopes his music connects with listeners like many of the songs he grew up listening to connected with him. “I’ve always liked songs that focused on lyrics and that are truthful in nature as opposed to something that feels devoid. My hope is that people can connect with my songs and feel something on some level”.

“One year ago I did not see myself staying in the entertainment industry let alone releasing original music but here it is,” exclaims Benjamin!