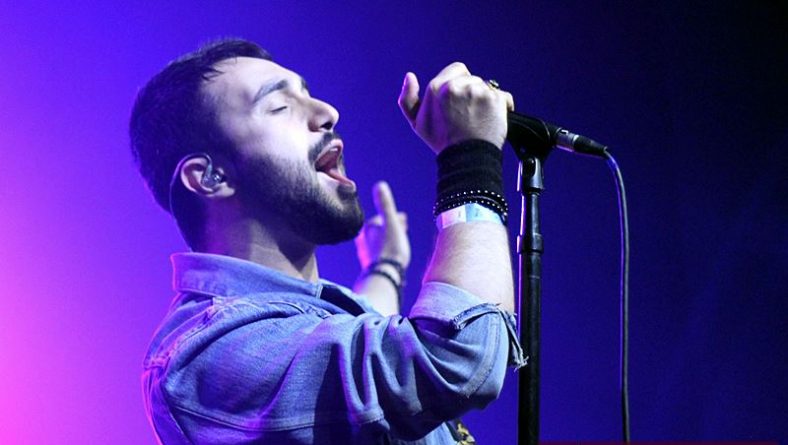 (Lead vocalist Joe Coccimiglio of Autumn Kings performing at St. Andrew’s Hall in Detroit during the WRIF Rock Girl Finals Party on May 30, 2018. Photo above by Kevin Blondin / Eyes On Windsor.)

Since 2015, Autumn Kings have made a name for themselves with their modern-rock sound which continues to build a buzz. Within three weeks of releasing their self-titled EP, on November 21, 2015, they moved almost a thousand copies. Their five song EP hit college radio, charting on several stations across Canada, eventually peaking at 37 on the top 50 national charts. 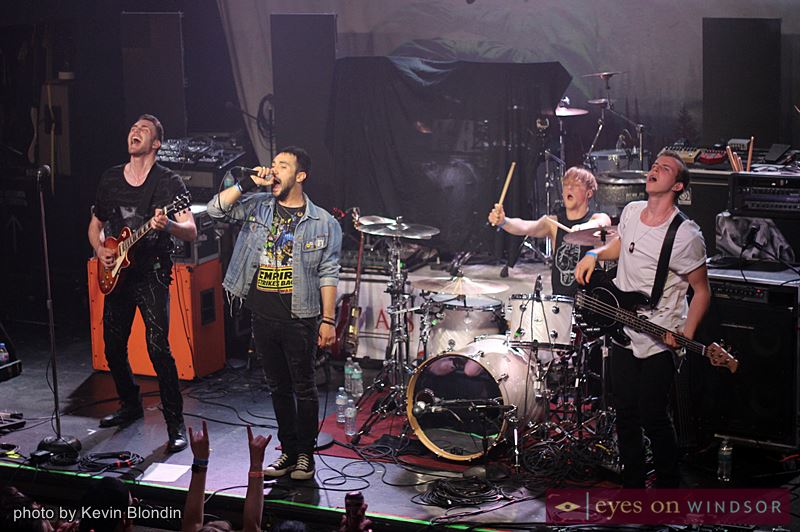 The band, Jake Diab (vocals/guitar), Nick Predhomme (drums), Joseph Coccimiglio (lead vocals) and Tibor Bognar (bass), all natives of the Windsor, Ontario, area recently relocated to Toronto. While the band still performs shows in the area, they’re not as frequent as before. Eyes On Windsor took the opportunity to send photographer Kevin Blondin to cover their recent show in Detroit. 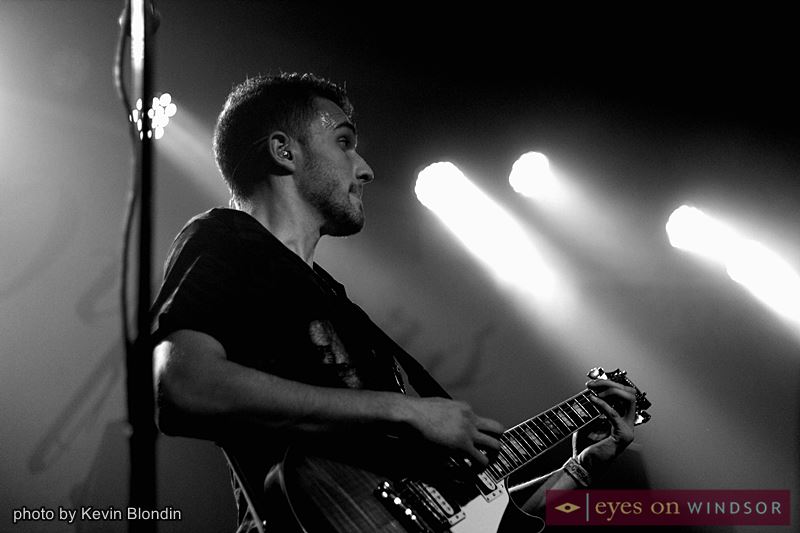 Jake Diab of Autumn Kings performing at Saint Andrew’s Hall in Detroit during the WRIF Rock Girl Finals Party on May 30, 2018. Photo by Kevin Blondin / Eyes On Windsor.

“The concert was loud, the bands rocked, the place was packed and the crowd was rowdy,” said Kevin Blondin. “That was a blast! It was a pleasure having the opportunity to shoot local pals, Autumn Kings, in Detroit’s Saint Andrew’s Hall.”

Autumn Kings have been busy shooting videos for songs from their debut album, Silver Screens, released March 10, 2017. A video for Fighting A Monster, the second song on the album, was released on April 18, 2018. Jake Diab calls it, “an Active Rock Heavy Hitter.” 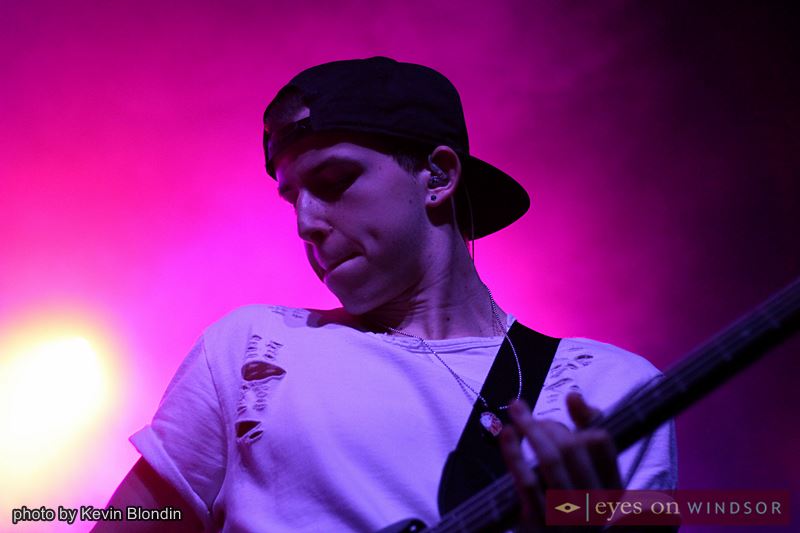 Tibor Bognar of the Autumn Kings performing at St. Andrew’s Hall in Detroit on May 30, 2018. Photo by Kevin Blondin / Eyes On Windsor.

The band wrapped up shooting a video for Devil in Disguise, the 9th song on the album, during the first weekend of May. “We will be releasing a video next week (early June) for the ‘Detroit Red Wings Staple’, Devil in Disguise,” Diab told us. “Devil in Disguise is a song that the Red Wings play very frequently at games now. It may very soon become the team’s goal song, which the band is stoked about.” A new album is in the works and it will be worth the wait, “we will have a new song ‘Aliens’ out in July as well as 2 new songs to follow up in August.” 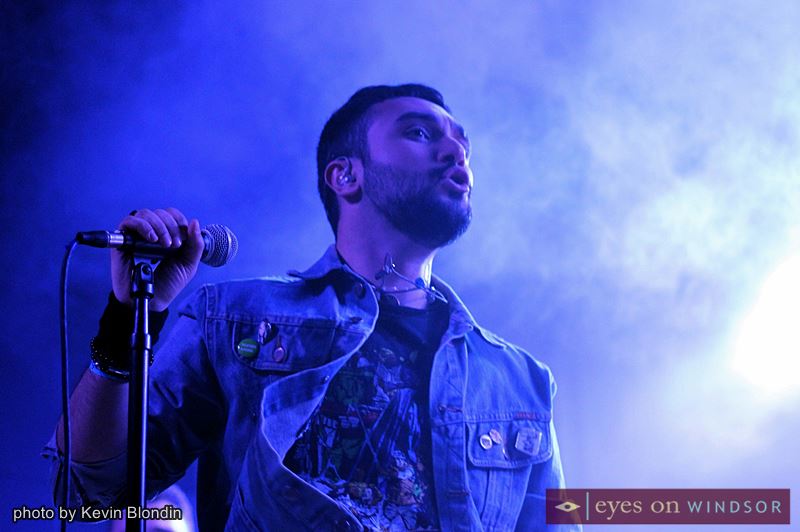 Joe Coccimiglio of Autumn Kings performing at St. Andrew’s Hall in Detroit on May 30, 2018. Photo by Kevin Blondin / Eyes On Windsor.

For hometown fans of the Autumn Kings, having the opportunity to see them rock right over the border in Detroit, during the WRIF Rock Girl Finals Party at Saint Andrew’s Hall, was a treat!

This was the 13th annual WRIF Rock Girl search and competition. Each year one lucky winner takes on the role of entertainment reporter, representing the legendary Detroit rock radio station at concerts, VIP events, online and on air. Not only is this a paid position but the WRIF Rock Girl gets to hang out with rock stars too. “I’ve met some phenomenal musicians through WRIF like Corey Taylor, Lzzy Hale and Halestorm, everyone from Korn, Five Finger Death Punch, Rob Zombie, Greta Van Fleet, In This Moment, Royal Blood, etc,” writes outgoing 2017 WRIF Rock Girl Kara D in a blog post on the radio station’s website. 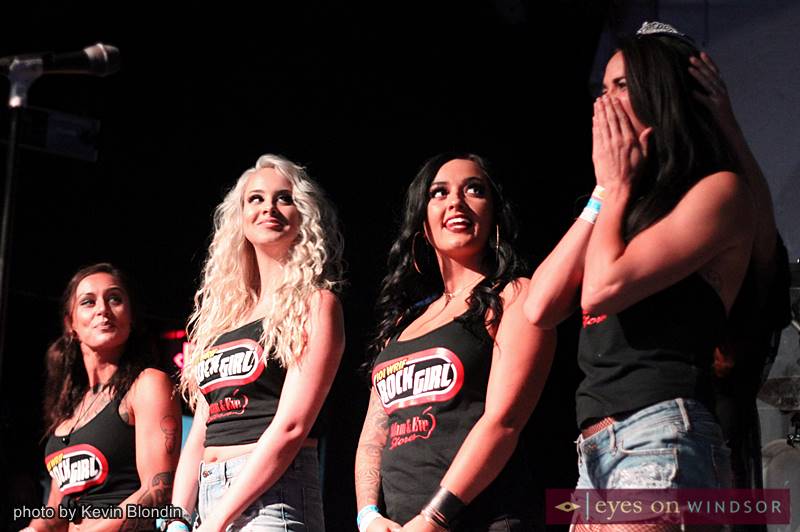 2018 WRIF Rock Girl finalists on stage at Saint Andrew’s Hall in Detroit with Hailey B being crowned the winner on May 30, 2018. From left to right Jessi R, Ashlyn O, Taylor G, and Hailey B. Photo by Kevin Blondin / Eyes On Windsor.

The search concludes with the final four contestants appearing at the annual WRIF Rock Girl Finals Party. The event features a live rock concert and the crowning of the new WRIF Rock Girl. 2017 WRIF Rock Girl Kara D was at the event to pass the crown down to 2018 WRIF Rock Girl winner, Hailey B. Both made an appearance at the Detroit Grand Prix this weekend, the last for Kara D as WRIF Rock Girl and the first for Hailey B. 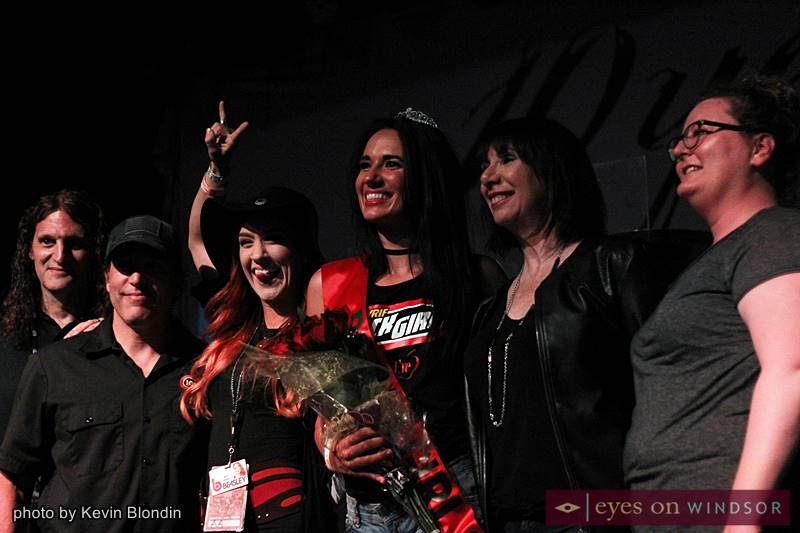 The Autumn Kings were followed by a spectacular line-up of rock bands including Otherwise, Shaman’s Harvest, and 10 Years. 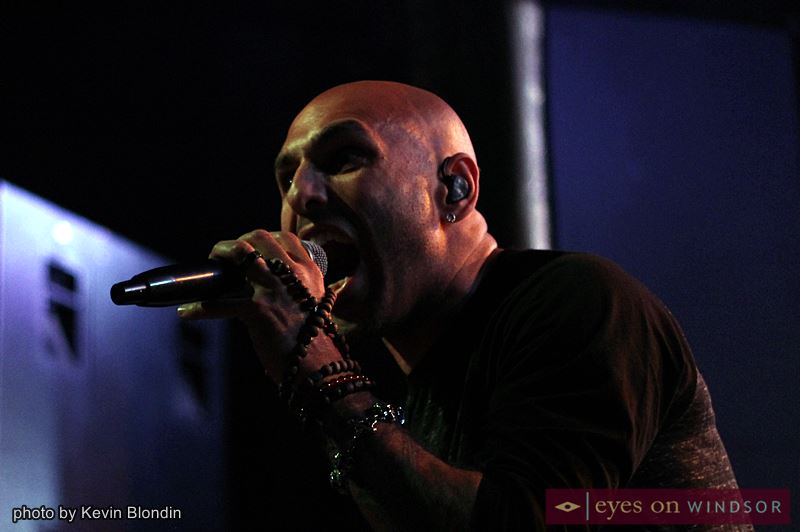 Lead vocalist Adrian Patrick of Otherwise performing at Saint Andrew’s Hall in Detroit on May 30, 2018. Photo by Kevin Blondin / Eyes On Windsor. 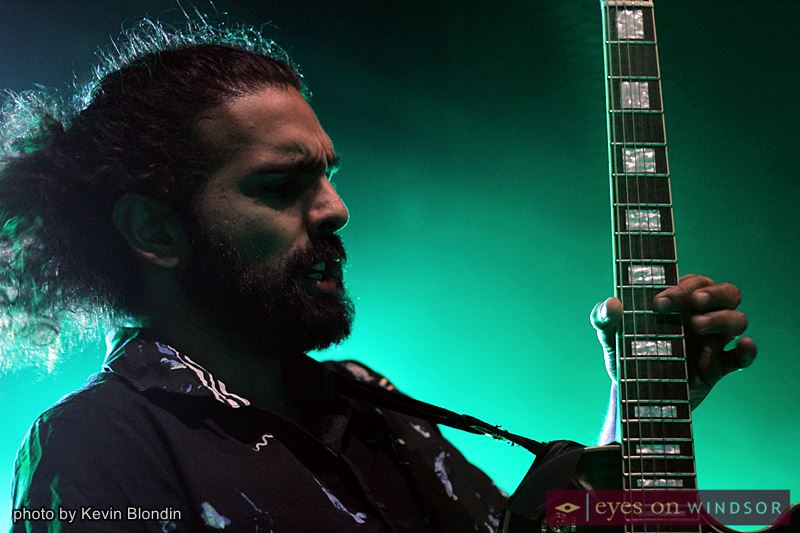 Ryan Patrick of Otherwise performing at Saint Andrew’s Hall in Detroit on May 30, 2018. Photo by Kevin Blondin / Eyes On Windsor.

American rockers, Otherwise, hailing from Los Vegas, Nevada, include Adrian Patrick (lead vocals),Ryan Patrick (lead guitar/vocals), Tony “The Beast” Carboney (bass/vocals), and Brian Medeiros (drums). The band has released three full-length albums on Sony Music Entertainment, titled True Love Never Dies (2012), Peace At All Costs (2014), Sleeping Lions (2017). Previous to signing a record deal with Century Media, as an unsigned band , they released one self-titled full-length album (2006) and one EP titled Some Kind of Alchemy (2009). Their latest album “Sleeping Lions” was released on September 22, 2017. It has received fantastic reviews and fans in Detroit rocked to some of those tunes.

For more information about the band visit https://otherwisemusic.com 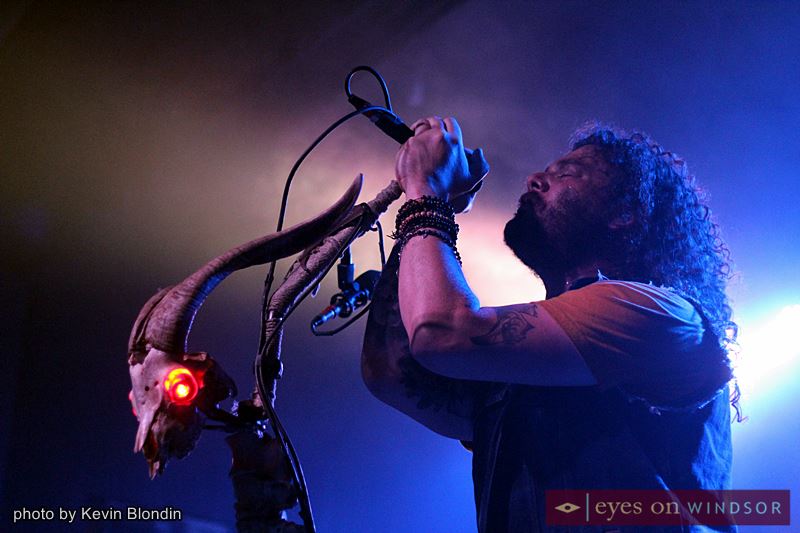 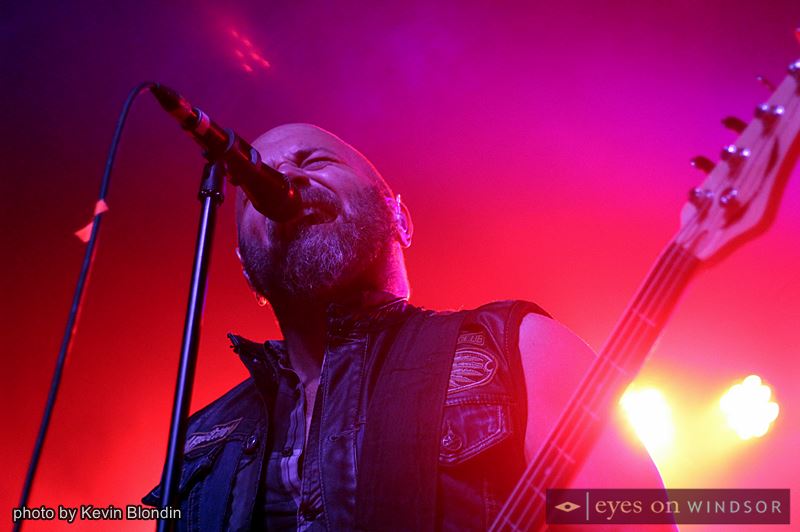 Shaman’s Harvest is one of the most amazing bands to emerge from the American Midwest. This five piece rock band includes Nathan “Drake” Hunt (lead vocals), Josh Hamler (guitar), Matt Fisher (bass), Derrick Shipp (lead guitar), and Adam Zemanek (drums). Together this group has created a unique mix of modern and classic rock with a southern twist that has energized fans across the nation. Their latest albumn, Red Hands Black Deeds released on July 28, 2017, is a darker, visceral, and more layered sound, ranging from the ominous, haunting vibes of the title track prelude, “A Longer View,” “The Devil In Our Wake,” and “Scavengers” – which could fit just as easily on a horror film soundtrack as it does on this rock band’s album – to quieter, more vulnerable moments as heard on “Tusk and Bone” and “Long Way Home.”

Shaman’s Harvest rocked the crowd in Detroit during the WRIF Rock Girl Finals.

For more information about the band visit https://shamansharvest.com 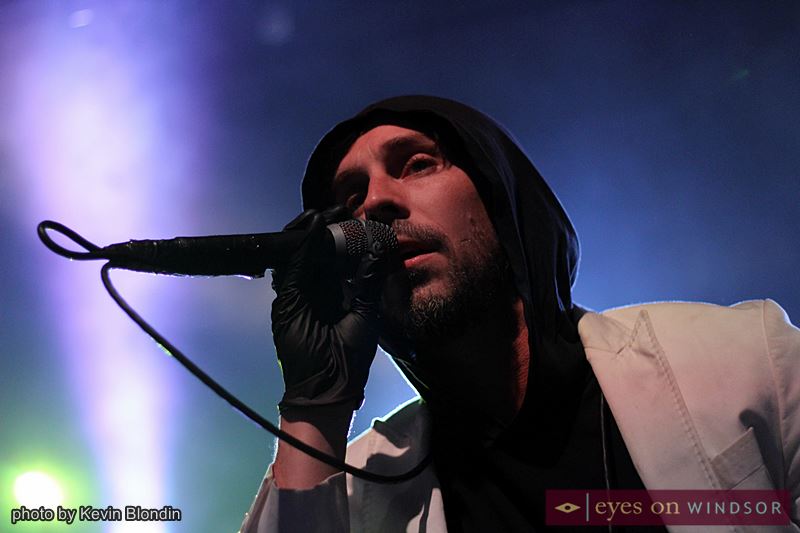 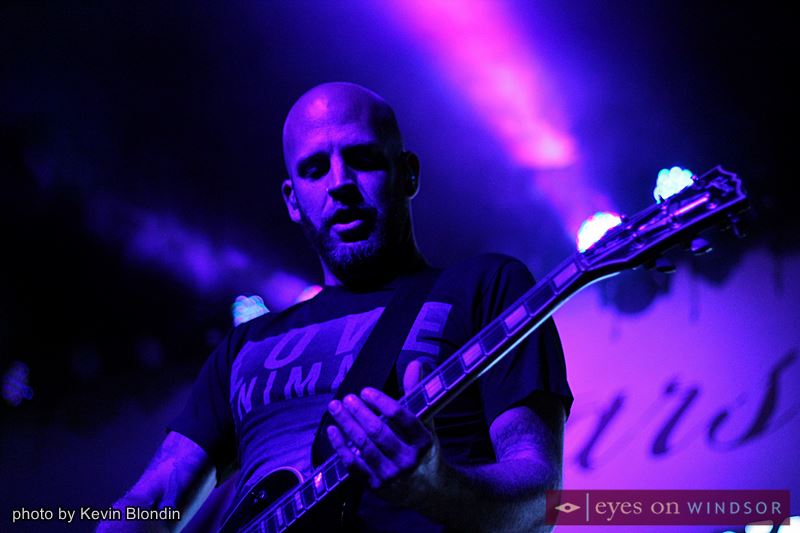 Matt Wantland, guitarist of 10 Years, performing at Saint Andrew’s Hall in Detroit on May 30, 2018. Photo by Kevin Blondin / Eyes On Windsor.

Alternative metal band, 10 Years, hailing from Knoxville, Tennessee, consists of Jesse Hasek (vocals), Brian Vodinh (guitar), Matt Wantland (guitar), Chad Huff (bass), and Kyle Mayer (drums). Their eigth and latest studio album, (How to Live) As Ghosts, released on October 27, 2017, is their most dynamic and multi-dimensional record to date. “Novacaine”, the first single off of the album peaked at number 5 on the Billboard US Mainstream Rock Songs chart. The success of the album comes with Brian Vodinh and Matt Wantland re-joining the band and a more collaborative writing process.

“It used to be that just Jesse and I would write the full song, and the other guys would add a little spice to it. This time, we’re starting the writing process as a full band. Sometimes it starts with a riff. Sometimes it starts with a vocal. Our formula is no formula, and it kind of works. And, we work together in a more constructive and healthier environment now,” explains Vodinh.

The sixth collaborator was Grammy award-winning producer Nick Raskulinecz (Alice in Chains, Foo Fighters, Deftones). “Nick made us step outside our comfort zone,” explains Hasek. “It made for a different sounding record. The one thing we never wanted to do is recreate the same thing over and over. We have always been musicians that love to explore and venture into new horizons.”

For more about the band visit http://10yearsmusic.com