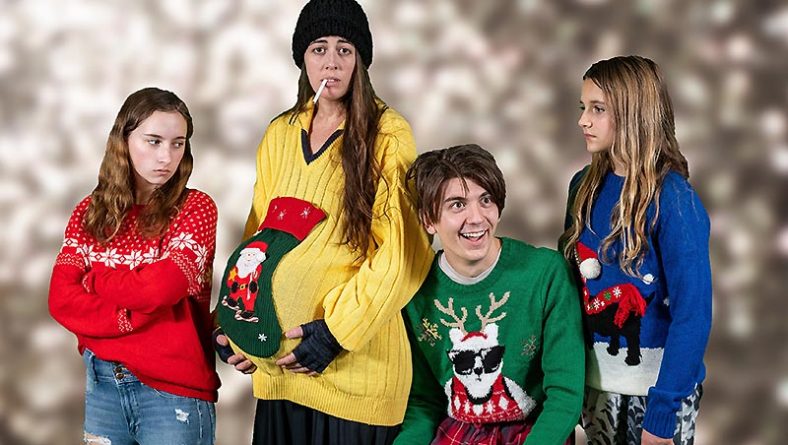 (Members of the O’Pheasant family in Post Productions presentation of Another F***-ing Christmas Play, from left Julia Pastorius as Agnes, Fay Lynn as Carol, Nikolas Prša as Teensy Tim, and Maria Hausmann as Other. Opens for 8 performances at Shadowbox Theatre on Nov. 30, 2018. Photo above by The Head Shot Company and courtesy of Post Productions.)

“You won’t want to miss this one,” says co-writer and co-director Michael K. Potter. ‘unless, maybe, you think of Prancer and A Christmas Prince as sacred art.”

Another Fucking Christmas Play: A Fucking Musical follows the misadventures of very different people spending Christmas at a once-elegant resort in the Colorado mountains. It’s been ten years since “the incident”, which destroyed the local economy, and the resort has never recovered. It’s still owned and managed by the cross-dressing misanthrope Willie Finch (Michael K. Potter), and still employs Chip Williams (Eric Branget) and Biff Davidson (David Burrows) as its lounge act, singing to dwindling and less attractive audiences. An assortment of oddball characters still hangs out from time to time – such as the tragically misunderstood tycoon Marianne Marley (Cindy Pastorius) and her beau, reality-show star Brody Brosephine (Matt Froese) – and two local alcoholic Santas, Chris Nichols (Michael O’Reilly) and Sam Klausowitz (Zephyr) basically live on the premises. 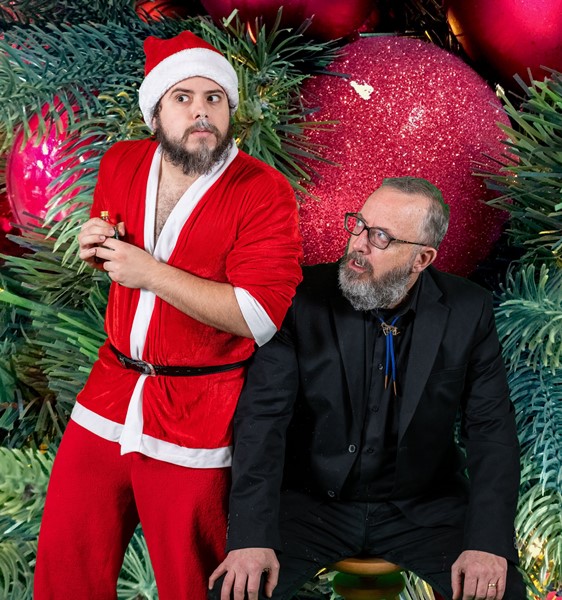 Zephyr (left) as Sammy Klasowitz and Michael O’Reilly as Chris Nichols in Post Productions’ Another F***-ing Christmas Play opening at The Shadow Box Theatre in Windsor, ON, on Nov. 30 and running through Dec. 15, 2018. Photo by The Head Shot Company and courtesy of Post Productions.

But the arrival of two different groups of guests throws the resort out of its uncomfortable rut. Two rejected sisters – Noelle (Carla Gyemi) and Yula (Julie Walton) are attempting to reconcile with their estranged famous sister, Holly (Samantha Edwards), whose singing career has fallen on hard times. And an impoverished family has shown up, after winning a trip in Middle Class Dreams Monthly magazine: Carol O’Pheasant (Fay Lynn) and her three eccentric children, Agnes (Julia Pastorius), Teensy Tim (Nikolas Prsa) and Other (Maria Hausmann). As these disparate personalities clash into each other in pursuit of their own goals, secrets are revealed, songs are sung, and sheer lunacy prevails.

“We spent a fun year and a half writing the show – I mean, we made ourselves laugh a lot – but then great actors come in and make the material even better. That’s been exciting. Audiences are going to love the unexpected combination of sheer cynicism and heartfelt compassion as characters struggle to take charge of their own lives and define who they are instead of letting other people define them. That’s what the show is about at heart – though along the way we take aim at the banality and blandness of mainstream attitudes toward Christmas, the sentimentality and bigotry of classic Christmas films, the tropes and clichés we’ve mistaken for meaningful commentary.” 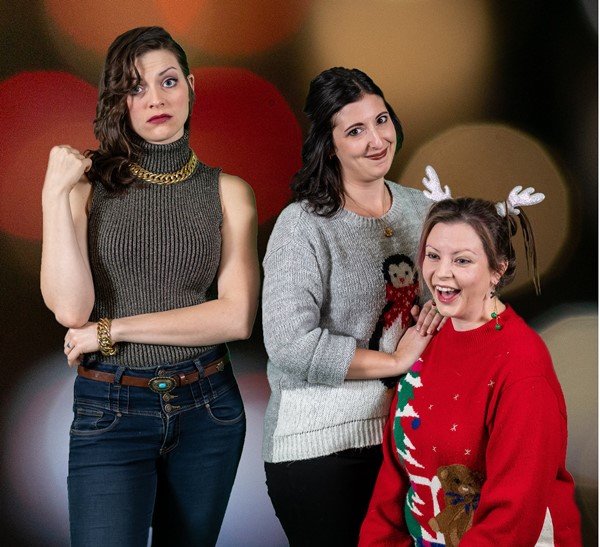 Samantha Lillian (left) as Holly, Carla Gyemi as Noelle, and Jules Walton as Yula, staring as the Lavigne sisters in Post Productions’ Another F***-ing Christmas Play opening at The Shadow Box Theatre in Windsor, ON, on Nov. 30 and running through Dec. 15, 2018. Photo by The Head Shot Company and courtesy of Post Productions.

The writers wanted to ensure the songs reflected a diverse range of styles and evoked classic Christmas movies of the 1940s and 1950s – particularly White Christmas and Holiday Inn – without copying them. And they realized they were incapable of doing that on their own. Luckily, local musician and composer Sam Poole – most recently the musical director of Company and Fun Home, and composer of Free – joined the team last year. “I wanted to mix the big Broadway style that everyone knows and loves with the sarcastic elements of other genres – such as pop, punk, and country”, Poole says. Poole is excited, too, that he was able to create and Original Cast Recording album, which will be made available for purchase physically and digitally. “The Original Cast Recording is a way for the show to live on past our closing performance. We’ve put so much work into this music, and we feel proud to share it with as many people as possible.”

Another Fucking Christmas Play A Fucking Musical is written, directed, and produced by Michael K. Potter, Fay Lynn, and Michael O’Reilly. Musical direction and music composition by Sam Poole. Lyrics by Michael K. Potter and Michael O’Reilly. The play will be performed at The Shadowbox Theatre (103B – 1501 Howard Ave, the corner of Howard and Shepherd) on November 30, December 1, 6, 7, 8, 13, 14, 15, 2018. All performances begin at 8:00 PM (doors open at 7:30).

Tickets can be purchased for $20 online at postproductionswindsor.ca or at the door, while supplies last.

Another F***-ing Christmas Play is also listed in the Eyes On Windsor Events Calendar.

A Rave Review For Post Productions’ Another F**king Christmas Play