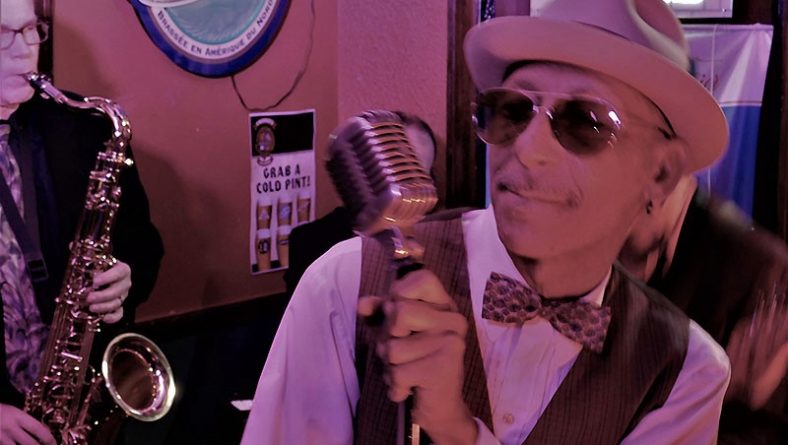 (An old fashioned microphone was brought in as a prop for the 519 Band’s lead singer Jamie Thompson. during the band’s Christmas music video shoot on Nov. 28, 2018. Saxophonist Dave Belch is seen on the left. Photo above by Robert Tuomi / Eyes On Windsor.)

According to Jamie Thompson, lead singer for The 519 Band, a well-known local blues and classic rock group, there are “so many sights to see all over Whisky Town.” 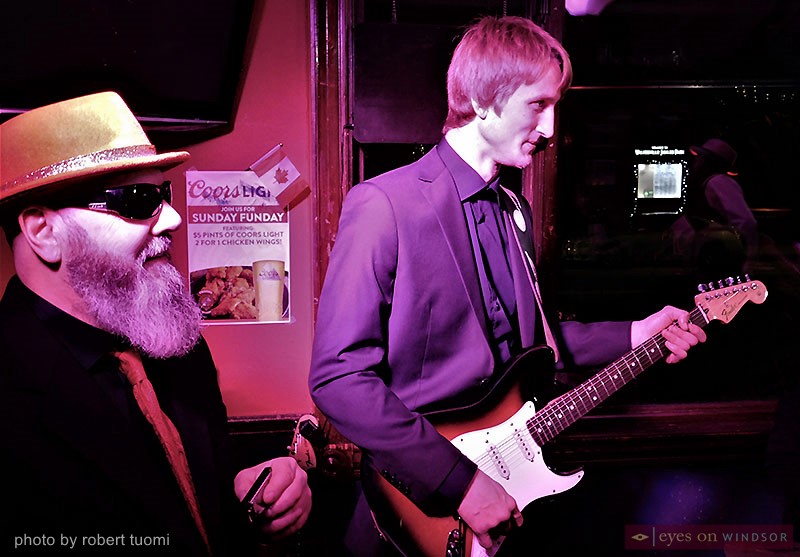 These are actually the lyrics from the bands promised new Christmas song which, it turns out, focuses on Walkerville. To set the stage the seven piece group donned their best seasonal attire and gathered at Walkerville’s O’Maggio’s Kildare House Wednesday night to record a music video of their new tune. Scenes had the band playing, actually pretending to be playing, to a recording of the new song while being filmed as well as interacting with customers.

Other scenes will have the musicians arriving at the Kildare and walking under the marquis of Wyandotte Street East landmark the Old Walkerville Theatre.

For Thompson, the words of the song came easy. He told Eyes on Windsor, they just seemed to flow in what became perfect harmony. With the lyrics in place the group headed into the recording studio to work on putting together the music track which has a decided blues beat. 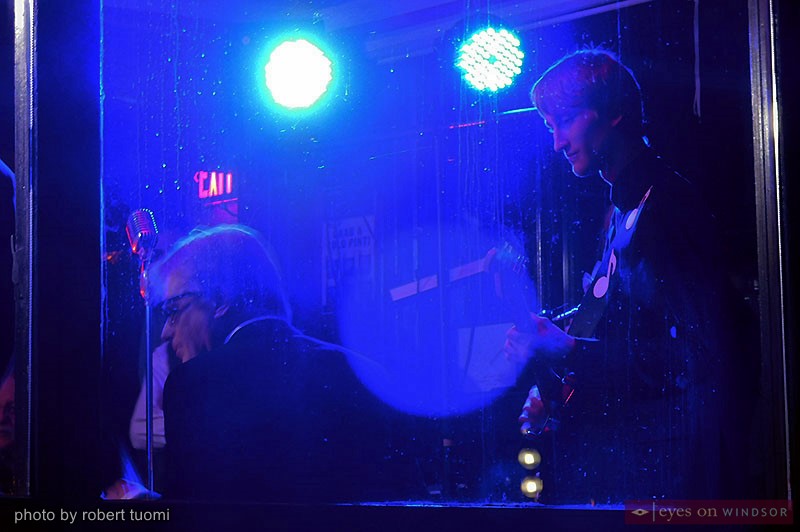 The 519 Band’s drummer John Zuliani and lead guitarist Ryan Thompson are seen through the front window of O’Maggio’s Kildare House during their Christmas music video shoot on Nov. 28, 2018. Photo by Robert Tuomi.

A few well-known Windsor musicians brought their moral support to the video shoot including Dave Whitehead, guitar player with the former local punk group the Dead End and post-punk band the Lost Patrol. Michael Pindus, of the Smokin’ Purple Monkeys, was also in attendance and helped out on some technical issues. 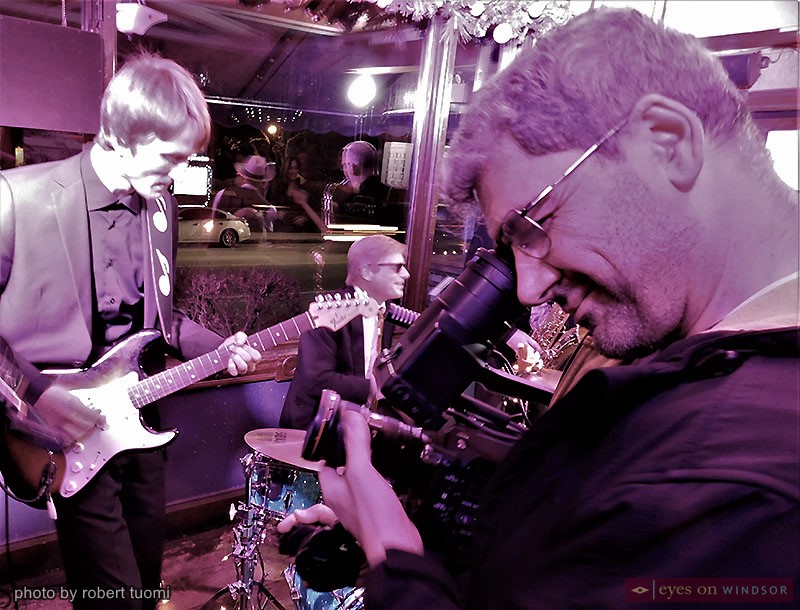 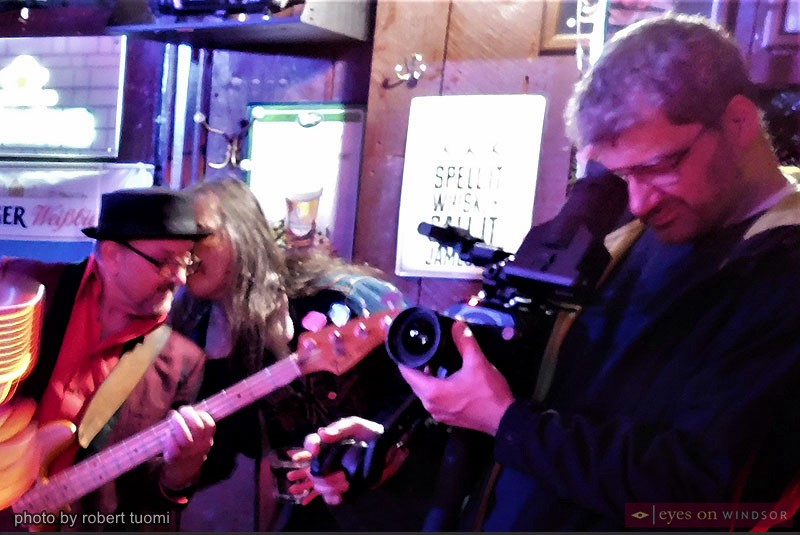 Bassist Rob Balint (left) works on a bass riff while videographer Walter Riggi sets up a scene for The 519 Band’s Christmas video on Nov 28, 2018. Photo by Robert Tuomi / Eyes On Windsor.

Walter Riggi, a musician in his own right, of Tecumseh’s Riggi Media International was videographer for the shoot. His firm has a fully outfitted recording studio and has produced videos for many local artists including Jen Knight, Bob Gabrielle and Joel Liberty.

A release date for the final video has not yet been set.

For the latest updates visit https://www.the519band.ca 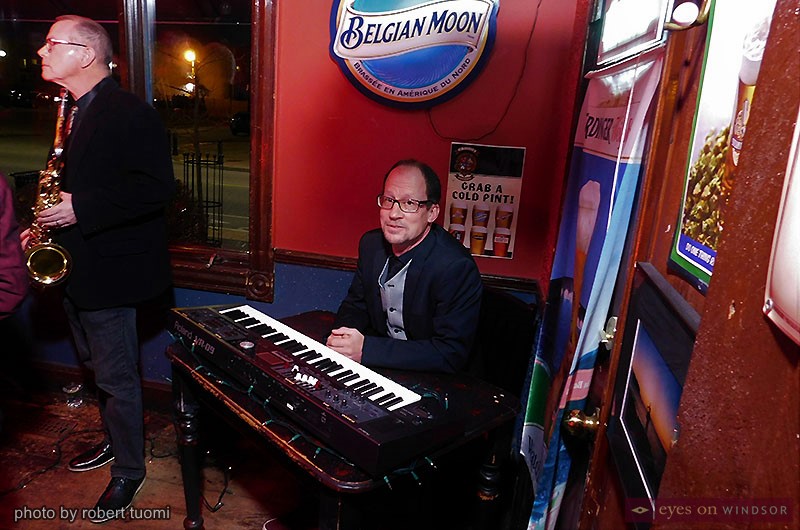 Saxophonist Dave Belch (left) and keyboardist Brian Jones await instructions for the next shoot in The 519 Band’s Christmas video on Nov. 28, 2018. Photo by Robert Tuomi / Eyes On Windsor. 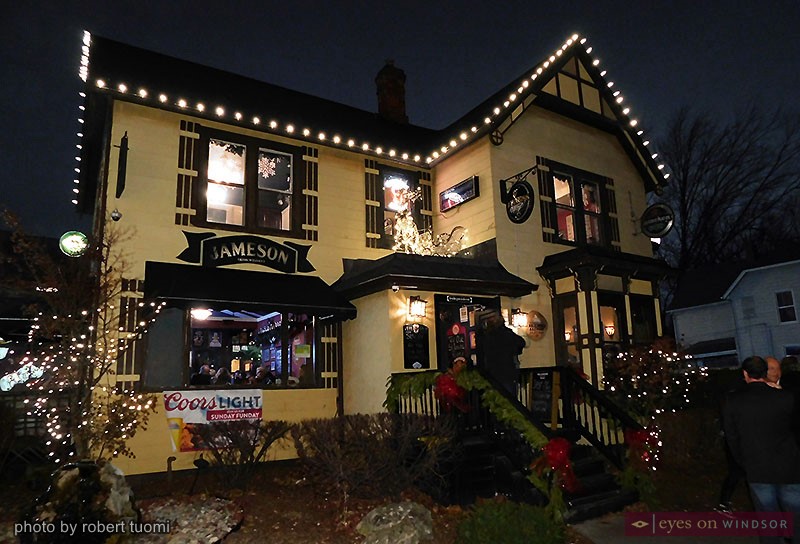 O’Maggio’s Kildare House in Walkerville was decorated for Christmas while inside The 519 Band was recording a video for their new Christmas song Whisky Town on Nov. 28, 2018. Photo by Robert Tuomi / Eyes On Windsor.