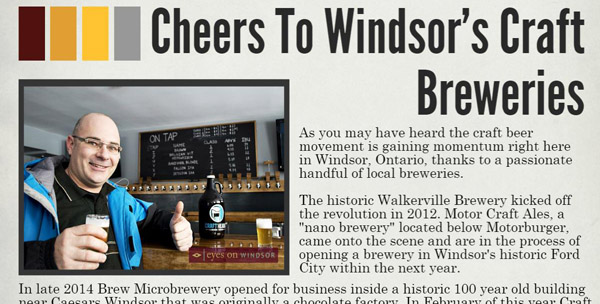 As you may have heard the craft beer movement is gaining momentum right here in Windsor, Ontario, thanks to a passionate handful of local breweries. As tribute we created a fun infographic for National Beer Day.

The historic Walkerville Brewery kicked off the revolution in 2012. Motor Craft Ales, a “nano brewery” located below Motorburger, came onto the scene and are in the process of opening a brewery in Windsor’s historic Ford City within the next year.

In late 2014 Brew Microbrewery opened for business inside a historic 100 year old building near Caesars Windsor that was originally a chocolate factory. In February of this year Craft Heads Brewing Company opened becoming the first craft brewery in the heart of downtown Windsor!  In Kingsville The Banded Goose Brewing Company began operating inside of Jack’s Gastropub in early 2014.

In just 2 years, 3 craft beer festivals have hopped into the Windsor Essex region.

Hang Onto Your Beer Mugs More Breweries On The Way

Hang onto your beer mugs because there are more breweries opening in the Windsor area within the next year.

A 19th century building in Olde Sandwich Towne is currently being transformed into Sandwich Brewing Co.

Owner’s of Johnny Shotz plan to open an offsite brewery in a former medical building in Tecumseh.

In the United States the Cullen-Harrison Act, which put an end to prohibition by allowing people to buy, sell, and drink beer, was signed into law by President Franklin D. Roosevelt. So technically speaking National Beer Day is a U.S.celebration.

But who cares! Canadians love beer too, and biasedly speaking more than any other  country in the world. We’ll use any excuse to celebrate beer right? Especially right here in Windsor where the craft beer revolution is gaining momentum.