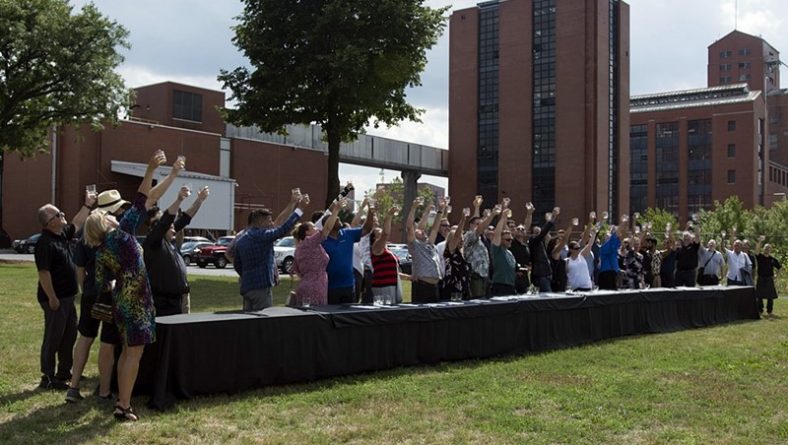 Canadians and Americans Salute Their Friendship

On Wednesday, Canadian and American dignitaries and guests held high, glasses filled with J.P. Wiser’s spirits in a rousing toast to each other. Toast To Detroit, organized by J.P. Wiser’s, involved a group of 50 invited guests on opposing shores of the Detroit River. On the Canadian side the group gathered in Windsor at the Hiram Walker & Sons Distillery on the J.P Wiser Terrace grounds of the J.P. Wiser’s Experience Centre. An equal group stood their ground under a tent on Belle Isle in Detroit. 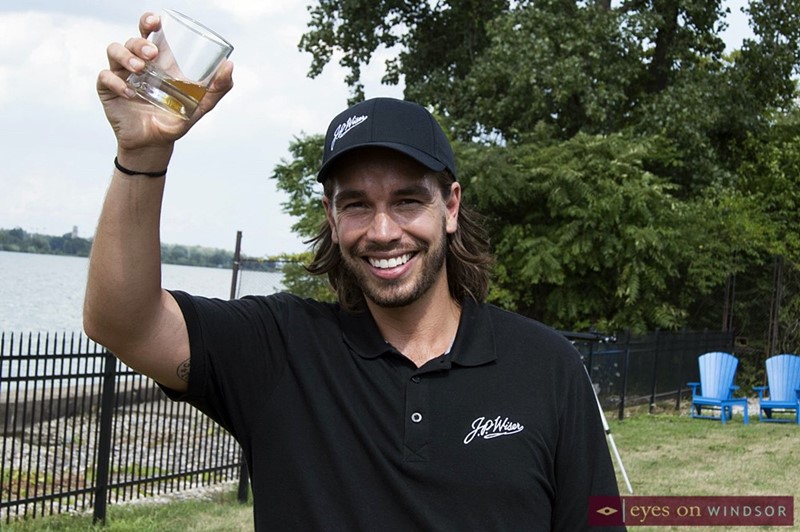 J.P. Wiser’s Brand Ambassador Spencer Gooderham holds up a glass in a Toast To Detroit on August 8, 2018. Photo by Eric Bonnici / Eyes On Windsor.

Wiser’s brand ambassador, Spencer Gooderham, talked of the unique bond between both countries and the shared enjoyment by their citizens of J.P. Wiser’s Windsor distilled products. “We’re gathered here today to celebrate two cities, Windsor and Detroit,” said Gooderham. He explained that the people of these cities are brought together by more than a common border, the people of Detroit are our “brothers and sister,” we are “over six million people that are connected by common passions, music, cars, and of course whisky.”

Master blender Don Livermore, in an interview with Eyes on Windsor, talked of the cross-border appreciation of his company’s spirits dating back to 1861 and was fully entrenched by the time the United States government banned alcoholic beverages. An urban myth would suggest this period of prohibition in the 1930’s ushered in a new market for Canadian whiskies when in reality the Americans had been enjoying Canadian products for more than seven decades.

According to Livermore, once the Americans found themselves in the midst of a civil war, the divided country’s southern distillers ceased sending products north. To quench the thirst in America’s northern states, Canada’s distillers, such as Wiser’s, began shipping south. Wiser’s began its operations in 1857 a year before Hiram Walker set up his distillery making both ready to serve when called on by US residents. 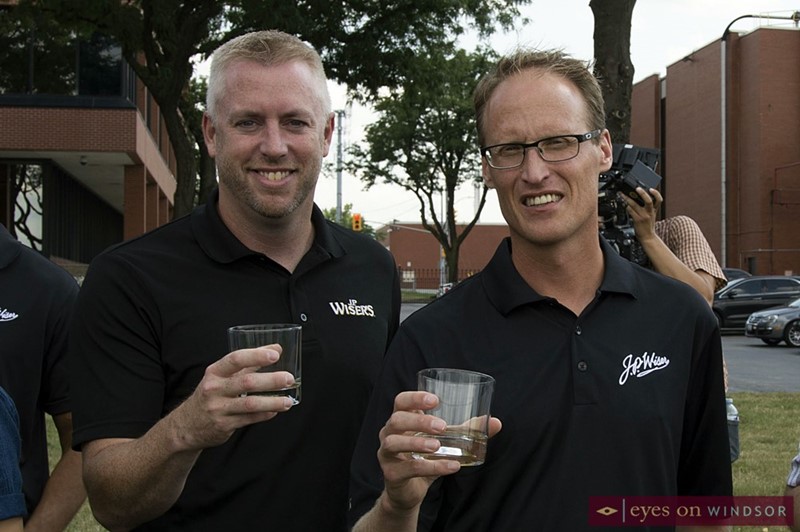 Neil Bishop and Don Livermore of J.P. Wiser’s hold up their glasses in a Toast To Detroit in Windsor, Ontario, on August 8, 2018. Photo by Eric Bonnici / Eyes On Windsor.

Wiser executives also used the Toast To Detroit celebration to highlight its latest marketing campaign. Neil Bishop, recently appointed Senior Director of the distillery’s operations, discussed some of the aspects of the “Hold It High” campaign which includes asking customers to submit a personalized toast to one of their friends. Some of the submitted toasts will be selected and put on display on billboard, social media and even broadcast media across Canada. Submissions can be made to https://holdithigh.ca 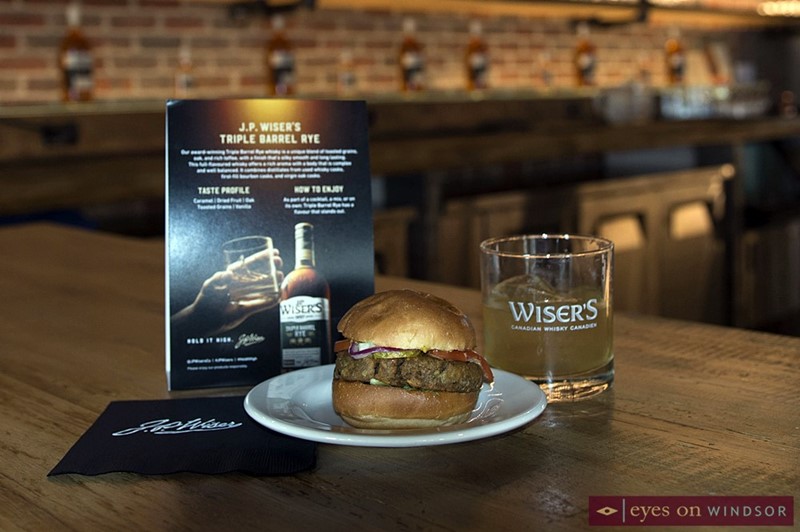 Motorburger veggie slider shown with a whisky beverage served during the Toast To Detroit celebration at the J.P. Wiser’s Experience Centre. Photo by Eric Bonnici / Eyes On Windsor.

In September, as part of the effort, Wiser’s will also introduce two new products. A ready to serve J.P Wiser’s Old Fashioned Whisky Cocktail – all the ingredients are in the bottle needing only ice – will be joined by a special J.P Wiser’s 35 Year Old Whisky. Guests during the Toast To Detroit enjoyed delicious sliders by Motorburger, live music by local D.J. Vin Vicious, and an exclusive tasting of each of the new spirits.

J.P Wiser’s 35 Year Old Whisky was recently awarded the title of “Canadian Whisky of the Year”. The spirit received the honour, along with the distillery where it is proudly produced – Hiram Walker and Sons Ltd. – being named “Distillery of the Year”, during the 2018 Canadian Whisky Awards. A limited number of cases of the prized-product have been set aside for national consumption and are expected to sell fast. 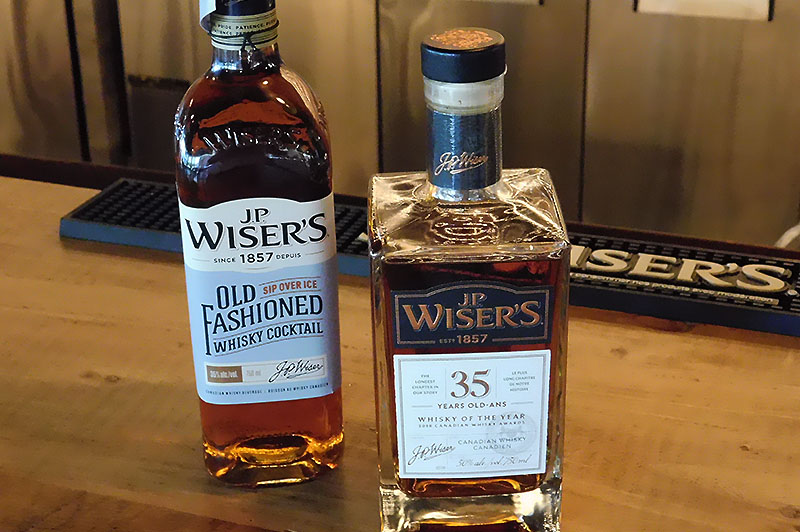 In September, J.P. Wiser’s will launch these two new offerings, a ready to drink cocktail and a 35 year old award winning whisky, on display at the J.P. Wiser’s Experience Centre in Windsor, Ontario, on August 8, 2018. Photo by Robert Tuomi / Eyes On Windsor.

Speaking of fast selling, J.P. Wiser’s Lot 40, rye whiskey, uniquely distilled in a single copper pot, is proving what Livermore senses is a change in Canadian tastes. He has found a growing interest in rye whisky with Lot 40 right there at the right time. ” J.P. Wiser’s 35 Year Old has sold out in nearly all markets within three months of its release in the fall of 2017,” stated a media release issued in January of this year.

In addition, there has also been a dramatic increase in the interest in the Hiram Walker & Sons Distillery tours. Initially started as a once a week experience for whisky lovers, the tours now run daily. Monday to Thursday at 2pm, Friday at 1pm, 3pm & 5pm and weekends at 1pm and 3pm. 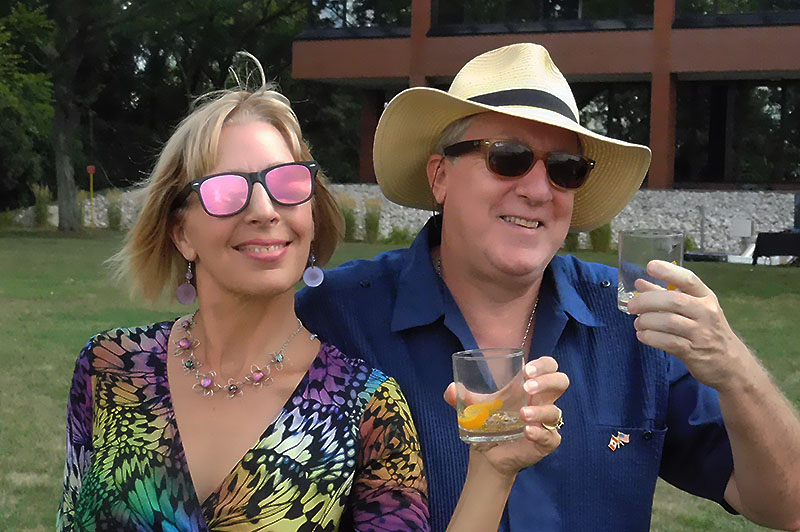 Included among the dignitaries saluting the cross-river relationship of Windsor and Detroit during the Toast To Detroit were local writers Elaine Weeks and Chris Edwards, proud authors of the popular “5,000 Ways You Know You’re From Detroit.” The toast took place at the J.P. Wiser’s Experience Centre on August 8, 2018. Photo by Robert Tuomi / Eyes On Windsor. 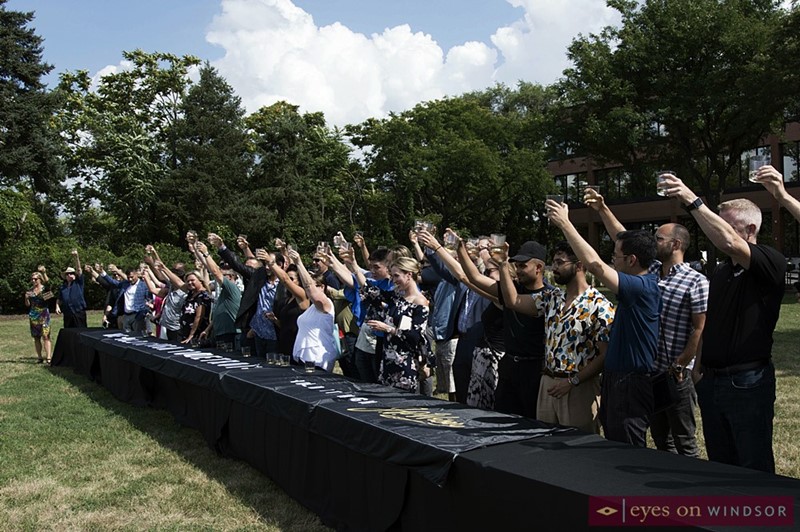 Community members from Windsor Essex, each grab a glass and Hold It High in a Toast To Detroit at the J.P. Wiser’s Experience Centre on August 8, 2018. Photo by Eric Bonnici / Eyes On Windsor. 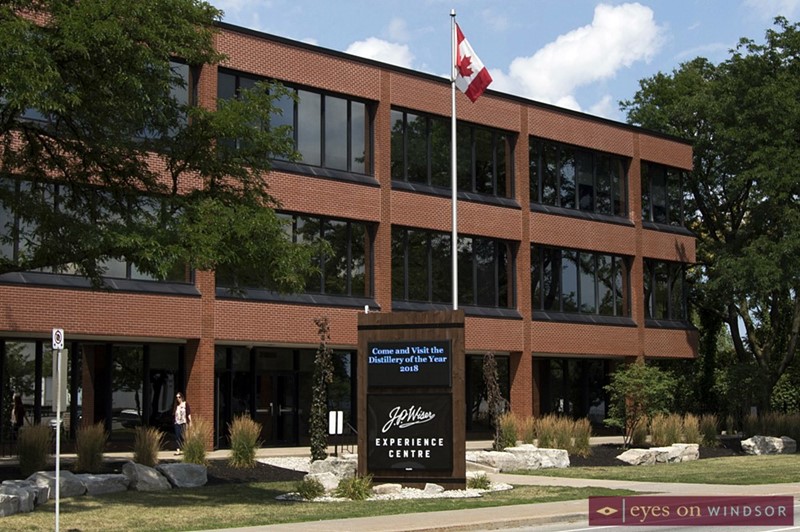