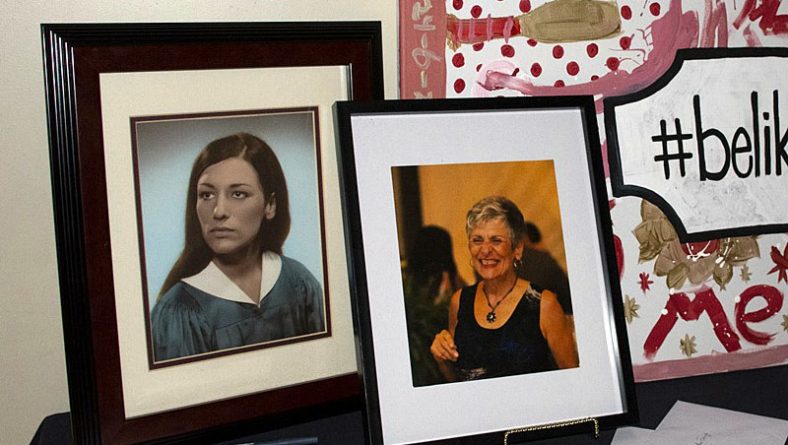 Rather than have a traditional funeral, retired local High School teacher, Sue Walker, requested that her family hold a Celebration of Life for her instead. Sue was diagnosed with cancer and a few short weeks later passed away (Dec. 18). Her family and friends gathered at the Royal Canadian Legion Branch 143 in Windsor, Ontario, on Jan. 5 to celebrate and remember her. 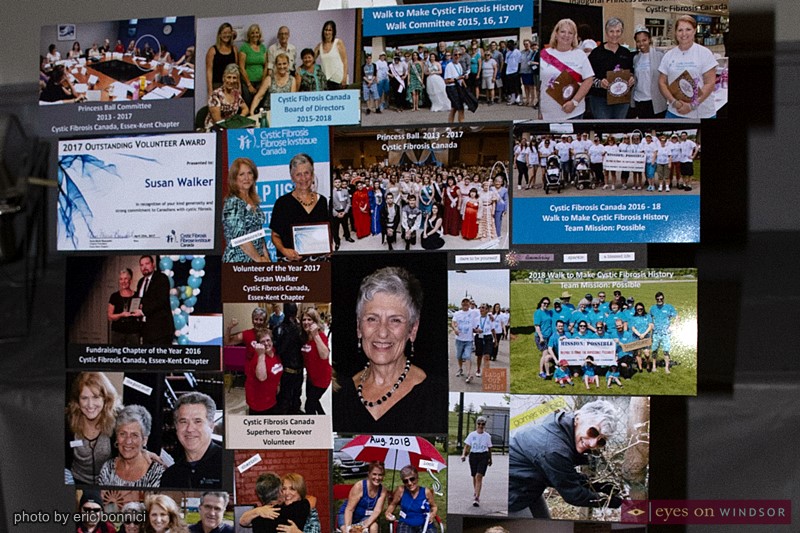 As family and friends took turns speaking at the celebration it became quite clear that Sue was a wonderful loving mother and grandmother who adored her children and grandchildren. An outgoing good friend who loved to make people laugh. Always willing to help others who needed it. A passionate volunteer with local non-profit groups, a favourite high school teacher, and contributor to the community as a whole. She is also known for singing and dancing every chance she had no matter where she was. She loved Motown and The Beatles to name a few. Fittingly, her life celebration featured live music performed by The 519 Band who graciously volunteered their time for the night. 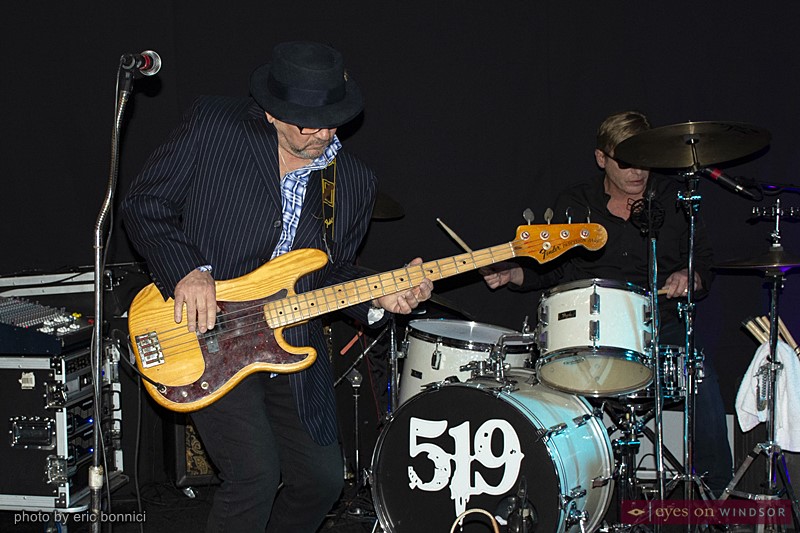 “My mother told us she didn’t want a funeral,” says Sue’s son Kevin Walker. “She told us she wanted In My life by the Beatles and My Girl played at her celebration funeral.” And that’s exactly what The 519 Band played during their sets. 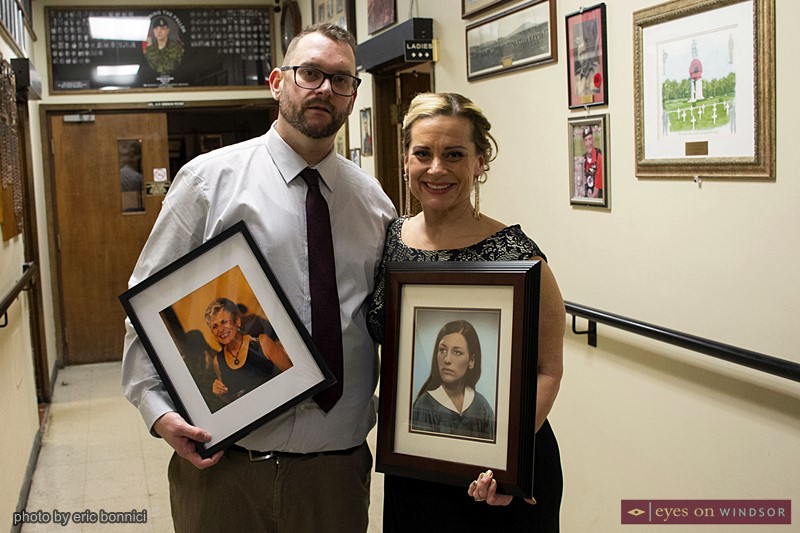 Kevin Walker (left) and Angela Yakonich holding photos of their mother, the late Sue Walker, during her life celebration on Jan. 5, 2019. Photo by Eric Bonnici / Eyes On Windsor.

In a Facebook post Sue’s daughter, Angela Yakonich, said she was “the most wonderful mother, grandmother, and friend. The strongest woman we have ever known – we are trying to channel some of that strength. Selfless is an understatement as she was always thinking of how she could help others – and did that every day of her life. Always on the go with more energy, sass and spunk than anyone we have ever met. Our lives will never be the same, however we take comfort in knowing she was such a huge part of our children’s lives; and we will forever remind them how much they were loved by their Mema.”

During the Life Celebration Angela said Sue was still doing volunteer work from the hospital and singing and dancing in her bed.

Angela’s friends, Irina Baluyot and Kelly Richard, were a big help and organized the decor and photos on display for the evening with some input from Sue’s children and friends. “Irina had all of our kids (all 6 grand kids) paint that canvas and she put on the lettering ‘Be Like Sue’,” explained Angela. 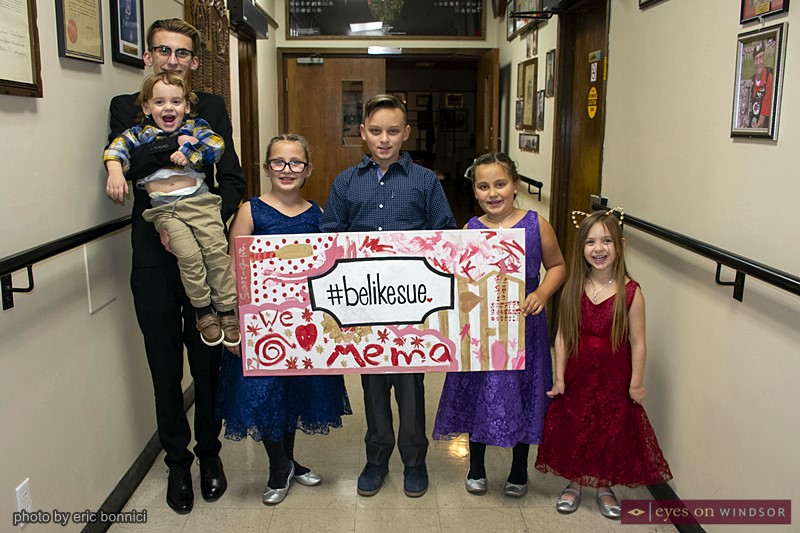 Chantelle Meadows, founded the popular Princess Ball when she was with Cystic Fibrosis Canada, and worked closely with Sue for the five years she volunteered with the event.

“Sue was just an amazing lady, she’d be so happy to see everyone here, not crying like I am, I just want everybody to be like sue because she was smiling, and happy, and dancing, and she took anything that anyone ever needed help with and did it. Every picture I have of her is smiling.”

Chantelle encouraged everyone to register as an organ and tissue donor in honour of Sue. 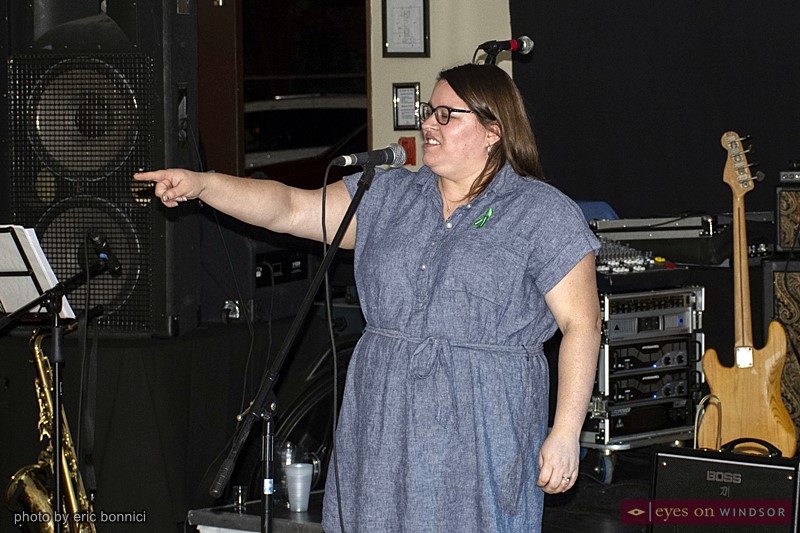 Chantelle Meadows (Foreman), tells a funny story about her friend, the late Sue Walker, on Jan. 5, 2019.

On a lighter note, Chantelle shared one of many funny stories she has. Sue would recruit grade 12 students from St. Joseph’s Catholic High School to volunteer during The Princess Ball. Chantelle overheard one boy student bragging about how he was going to “get laid so many times” on prom night. So when word got back to Sue she approached the boy, explains Chantelle, and said, “I heard you were talking about prom night… I hear that the kids who talk about it the most, get it the least!”

Anne-Marie Beausoleil a friend of Sue’s met her through The Princess Ball and also had a funny story. “Sue went to three high schools, Brennan was one of them, I couldn’t believe she remembered every high school song from 40 years previous. We were signing the Brennan Cardinals song in the middle of the classroom at St. Joe’s High School, the two of us, it was pretty funny because she just loved singing and dancing, and our best memories were working together and dancing together, drinking together, and just having a great time. Just this past October we went to a Beatles Tribute Concert, and danced and sang the whole time and all the way home, and frankly on the way home she was talking about the Beatles song, “In My Life”, that it was her favourite and that she wanted it at her funeral.” 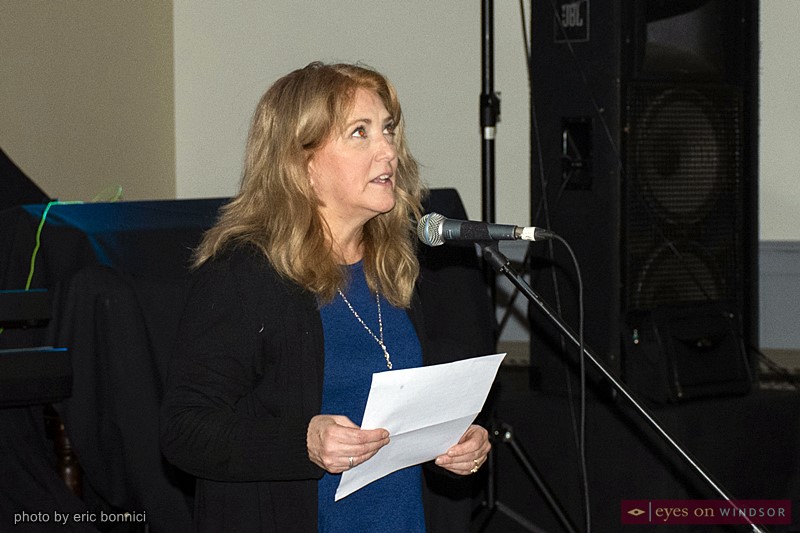 Anne-Marie Beausoleil remembers Sue Walker while speaking at her life celebration on Jan. 5, 2019. Photo by Eric Bonnici / Eyes On Windsor.

Laura Fontaine first met Sue when she was a student at Assumption High School in 1988, “probably catching me out of uniform in the hallway,” she joked. Laura said she came up to speak because she had some stories that captured the essence of who Sue was and the kind of spirit she had. To Laura’s horror she walked into the Sportsmen’s Club to see her parents drinking with Sue. Her parents became good friends with Sue. “I went on to become a teacher and Sue was there when I graduated from University and teachers college,” explained Laura. “She was at my wedding too, and go figure my first job as a teacher was at St. Joe’s High School when she was there. She graciously volun-told me to be part of her softball team.” 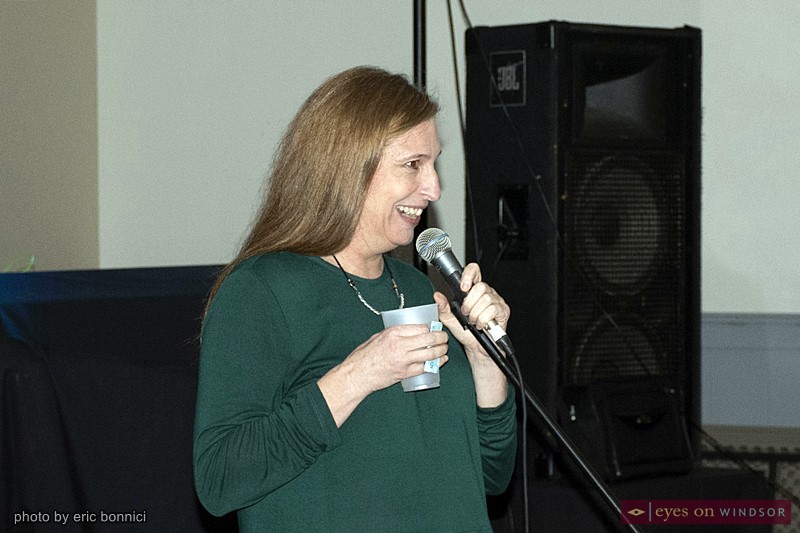 Laura Fontaine speaking during the life celebration for Sue Walker on Jan. 5, 2019. Photo by Eric Bonnici / Eyes On Windsor.

“One night we were at the club, it was Halloween and my mom’s birthday,” says Laura. “So I asked my mom, where’s Sue, she was like she’s over there. When I turned around Sue was dressed as a priest, and I still didn’t believe it because she was that convincing, she had drawn a mustache onto her face, she had the whole black outfit and white collar, and she even spoke in character.”

Linda Loignon (Leblanc) grew up next door to Sue. Their families, parents and siblings, have been friends all her life. 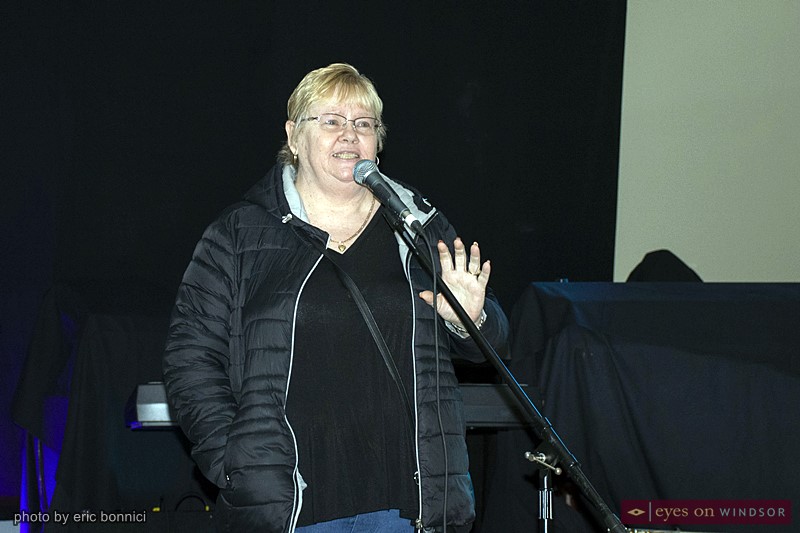 Linda Loignon (Leblanc) grew up together with Sue Walker and shared some stories about her during Sue’s life celebration on Jan. 5, 2019. Photo by Eric Bonnici / Eyes On Windsor.

“Every time I hear My Girl it’s Sue,” says Linda. “I always think of her, she’s always in my mind. One time Sue and Sue Peltier, we went on a trip to Atlantic City and it was a miserable kind of day. But Sue made us go underneath the boardwalk so we could sing ‘Under The Boardwalk Down By The Sea’ and it wasn’t really an enjoyable time but it was something Sue would do, just break out into a song and dance no matter where we were. And anybody that knew her will miss her… I’ll miss her forever!”

‎Sue McKellar‎ met her in grade 10 at St. Anthony Jr. High and says that Sue “was a bit of an instigator.” Together with their classmates they would play tricks on their teacher. “It’s funny that we became teachers, because we used to do crazy things for our grade 10 home room teacher, the poor lady.” In one incident McKellar says, “we all got in before the bell, before the teacher came, and we hid in the coat closet at the back of the classroom. We were all in there, the whole class and then Sue of course would say, 1, 2, 3, and we all came bursting out of the coat room. The teacher didn’t know where we were and she just about had a heart attack. Sue was always so much fun, I loved her dearly from grade 10 on and I had the privilege to teach with her at Assumption for the 8 years I was there, and then at St. Joe’s.” 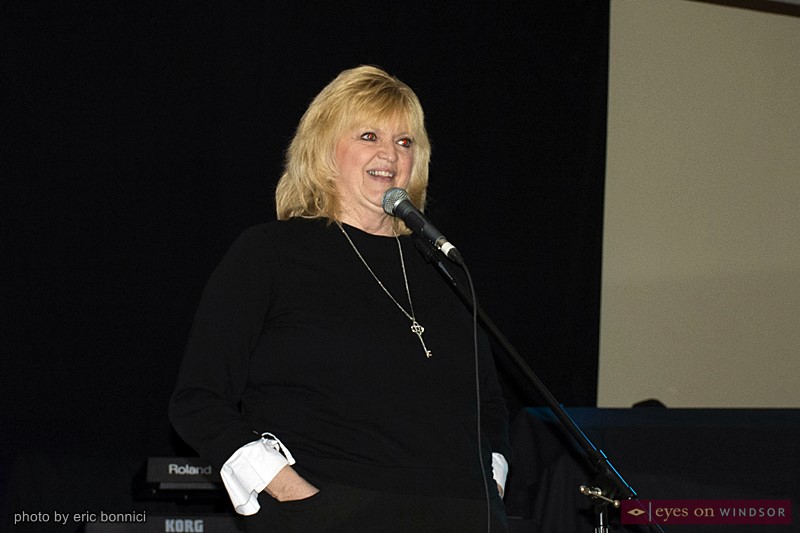 “At St. Joe’s someone mentioned Sue was dressed as a priest, well I was part of the group the time she was dressed as a nun,” says McKellar. They were doing a Christmas presentation for their students. The group dressed as nuns were chanting one of the Psalms from the Bible. ” We were doing that chant when we came out. Then all of a sudden I said hit it buster, and Motown music came on of course, Sue had choreographed with us and taught us all the songs and her actions. We had it down to a science. The kids went crazy.”

“She called herself Sue #1 and I got to be Sue #2, she said it was because she was a little bit older than me, but you knew it was because she thought she was the best. So I was gladly Sue #2 all those years. I know at St. Joe’s they used to call us the Sues because we hung around together and we were always doing fun things for the staff and the students. ”

“The beauty of Sue is that everyone in this room has a beautiful memory of her. I know she’s rockin’ it up in Heaven already. I can just see her, she’s probably dancing a lot more than any of us here tonight that’s for sure. Love your memories of her, and cherish them forever, that’s what I’m going to do,” concluded McKeller. 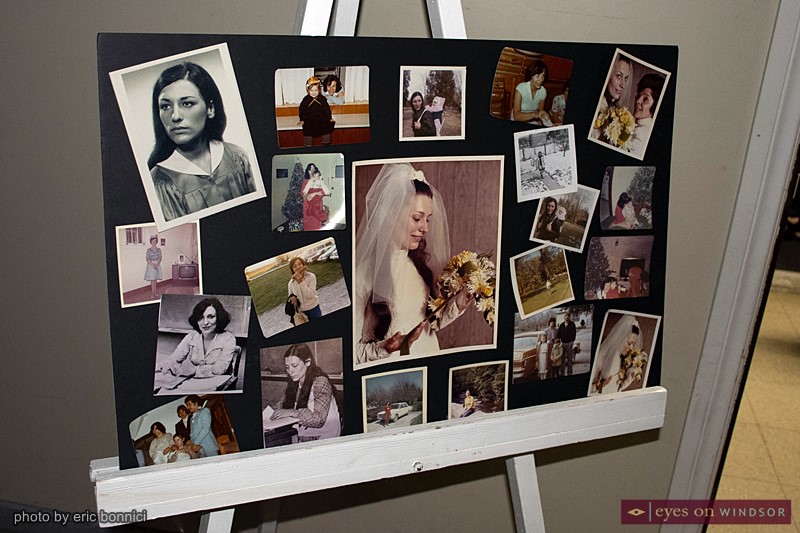 Photos of Susan Walker on display during her life celebration on Jan. 5, 2019. Photo by Eric Bonnici / Eyes On Windsor. 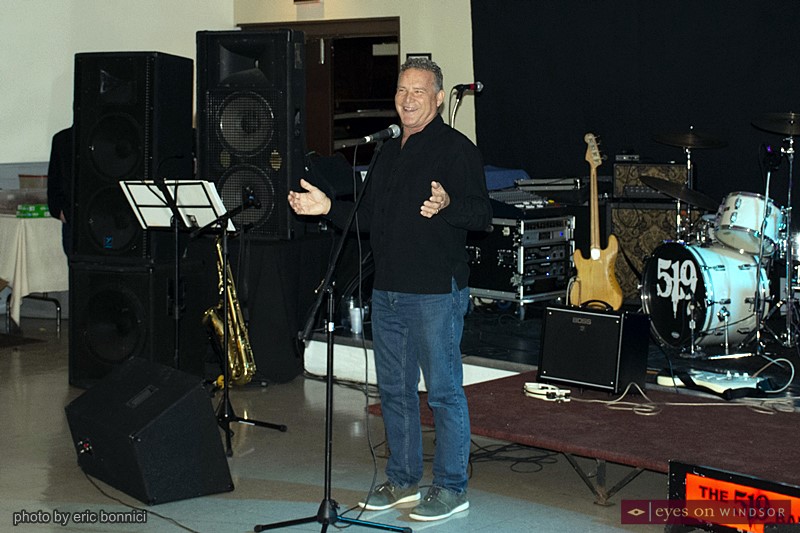 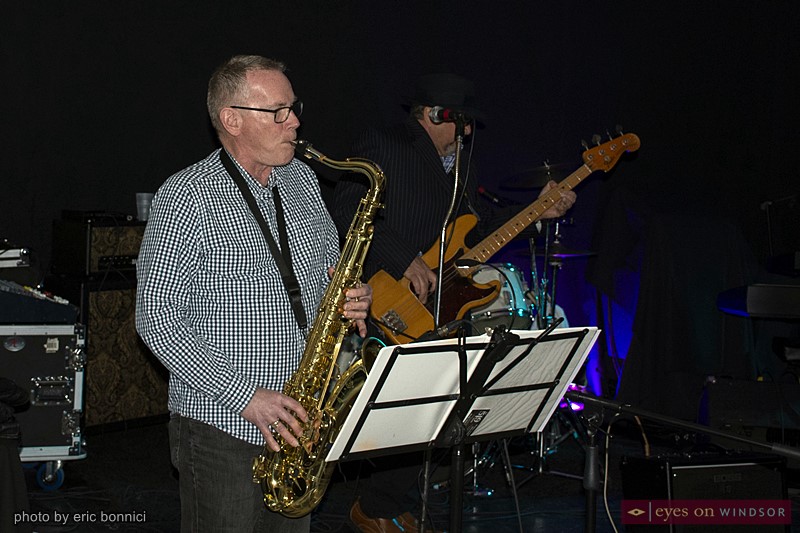 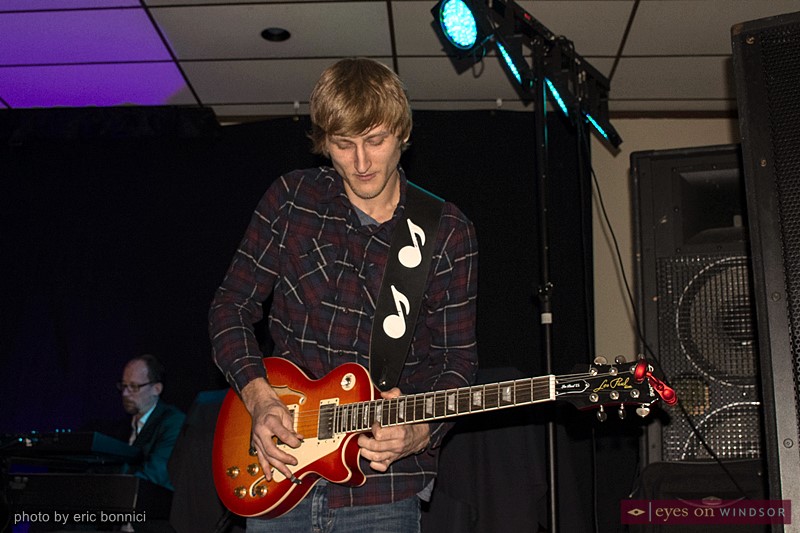 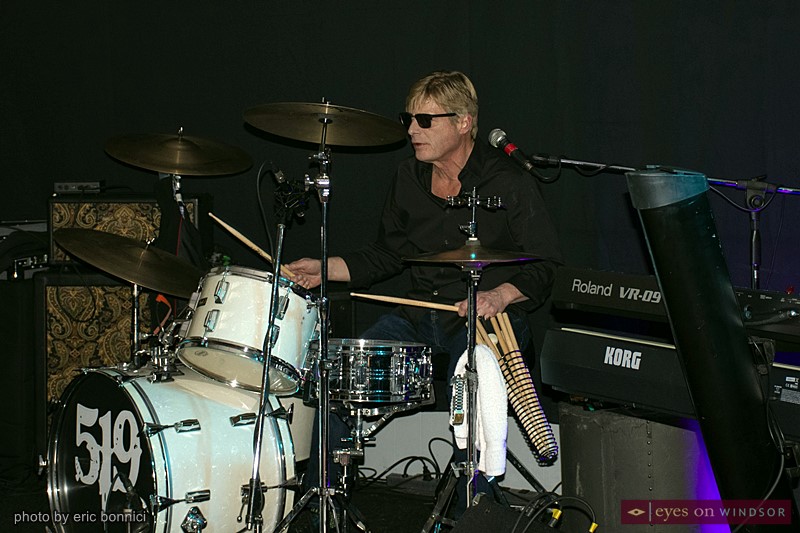 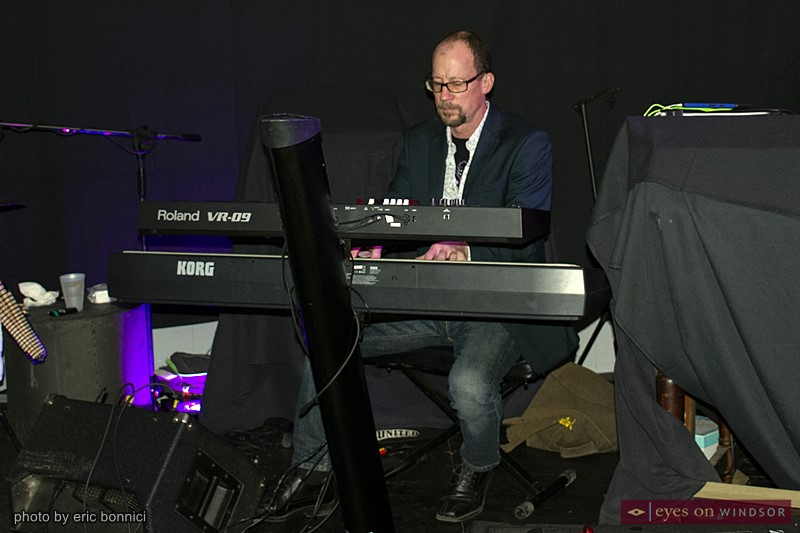 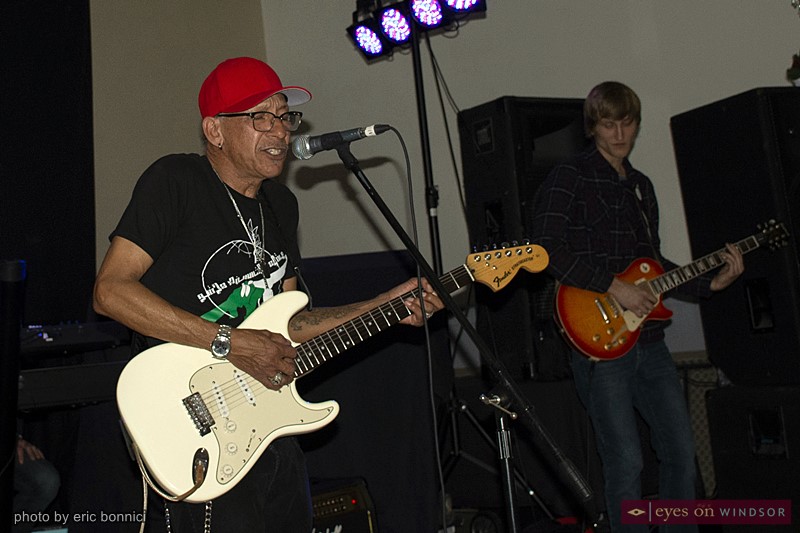 To see the full photo gallery of this event visit the Eyes On Windsor Facebook Page.