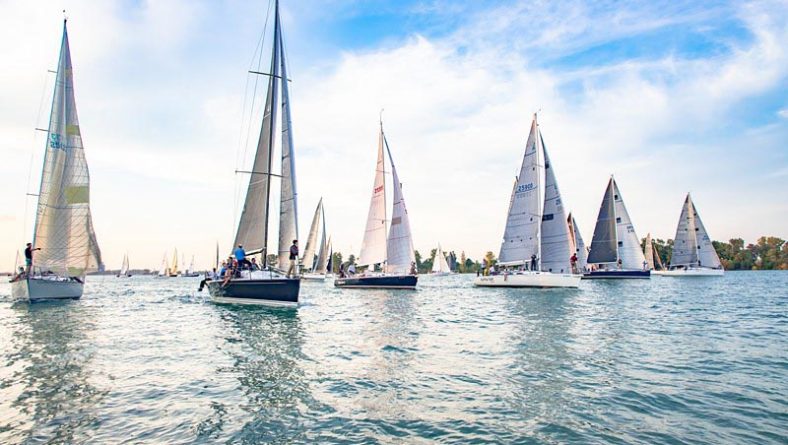 The Windsor Yacht Club celebrated the end of their racing season by hosting dozens of sail boats during the 43rd annual International Chimo Race on Wednesday, October 3, 2018. 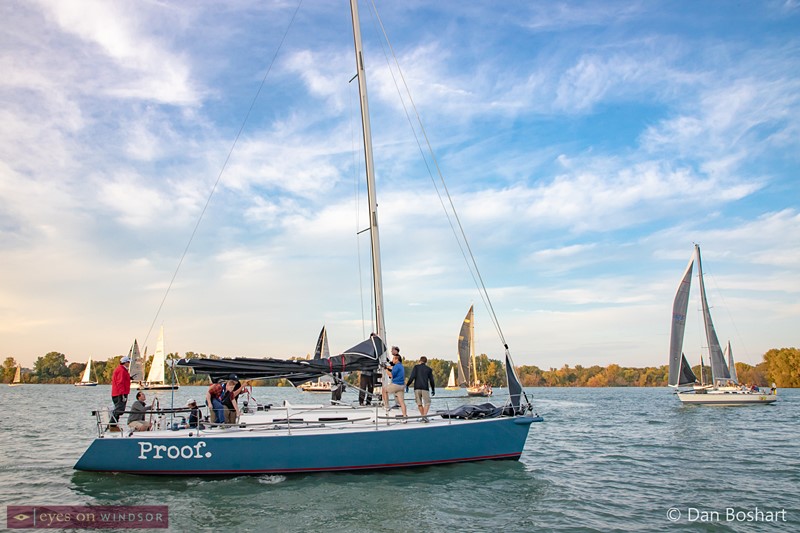 PROOF, overall winner of the 43rd Annual International Chimo Race, preparing to start racing in front of the Windsor Yacht Club on October 3, 2018. Photo by Dan Boshart / Eyes On Windsor.

Emerging victorious as the overall winner was Proof, skippered by Mike Fozo and Robin Kendrick, the sailboat hails from Bayview Yacht Club in Detroit. 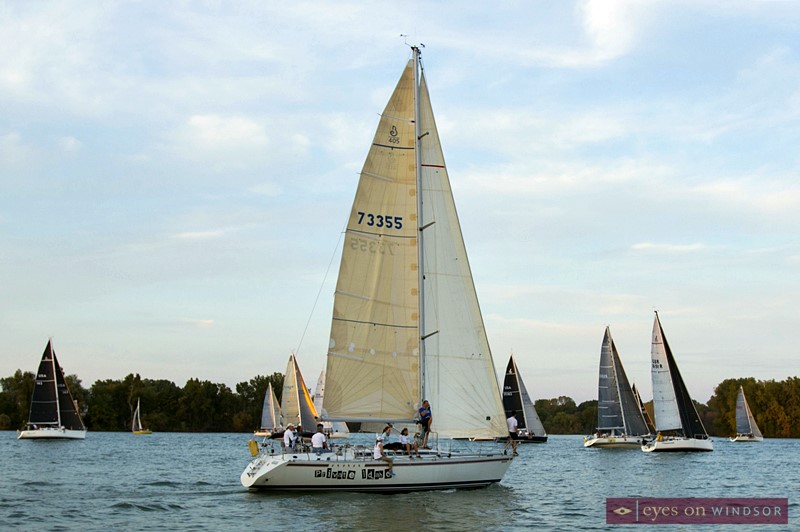 Each year a trophy is also awarded to the fastest Windsor Yacht Club member in the race. This year’s winner was Private Idaho, skippered by Alan Johnson and Carl Crooks.

This popular end-of-season event is open to sailors of all clubs in the Windsor and Detroit area. 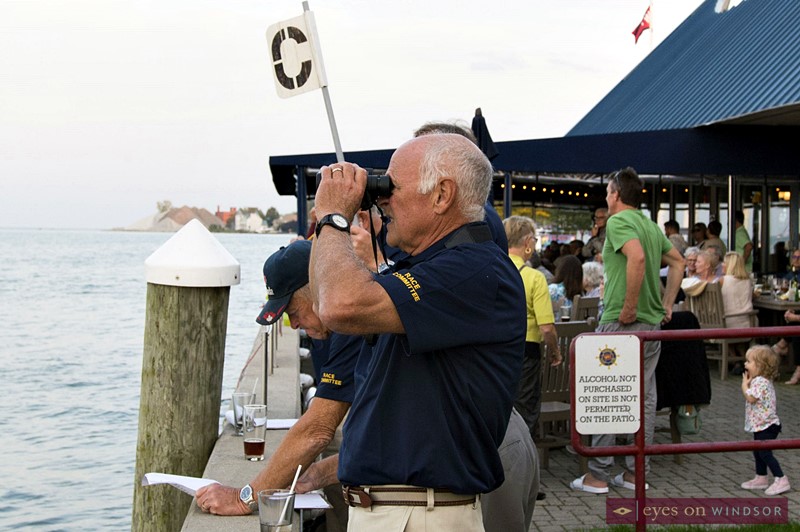 The Chimo Race provides a spectacular view, the only one of each race season, where dozens of sail boats gather along the mouth of the Detroit River at Lake St. Clair in front of the Windsor Yacht Club. During the club’s Wednesday night race series the sail boats gather at their starting point out on the lake. “It’s the only race that we start here in the river. On Wednesday nights we start it out in the lake. There’s a star pattern of buoys and there’s different courses we race around them depending on the direction of the wind and how strong the wind is,” states Rick Janisse, Windsor Yacht Club Race Committee Chairman. When there is light wind the boats may just race around one buoy and come back in, but when there is a good strong wind the course could be up to 8 miles long. 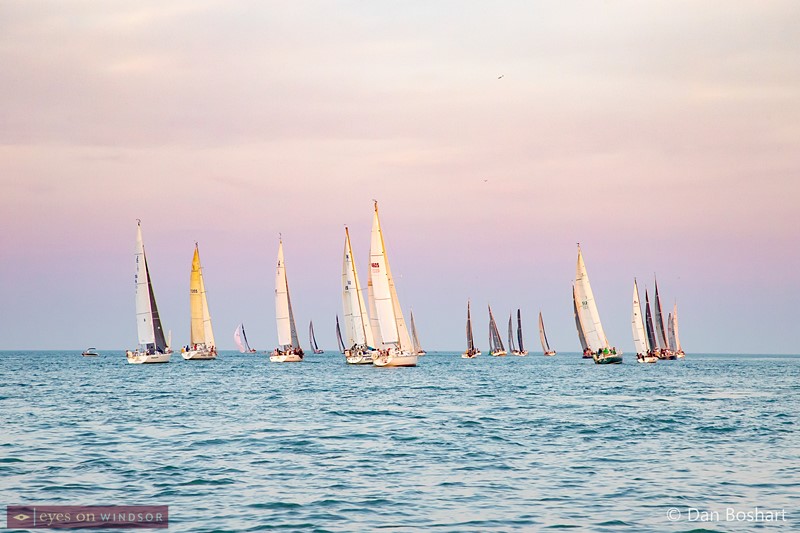 Sailboats racing out from the Windsor Yacht Club to the middle of Lake St. Clair where they completed a 7.2-nautical mile course as part of the 43rd annual Chimo Race on October 3, 2018. Photo by Dan Boshart / Eyes On Windsor.

Janisse says, “all the yacht clubs from the US and Windsor are invited, as you can see probably 90% of the boats are American, the same as in our Wednesday racing series. We have three boats that race (in the Chimo race) from our club (WYC), a couple of boats from Riverside Marina, and a couple from Southport Sail Club. So there’s not that many Canadians.” 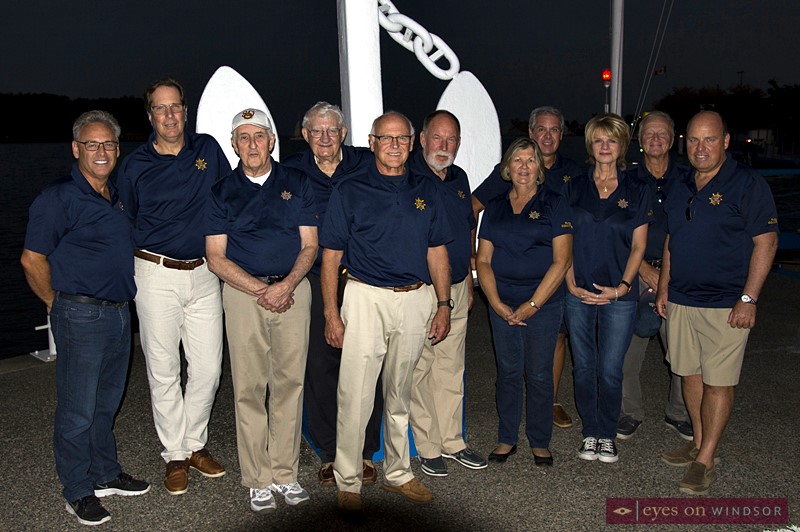 Members of the Windsor Yacht Club Race Committee pictured after the sailboats began racing during the 43rd Annual International Chimo Race on October 3, 2018. Third from the left is Chimo Race co-founder Ken Crooks. Photo by Eric Bonnici / Eyes On Windsor.

The idea for the Chimo race was first talked about in 1974, and when it first happened in 1975 it was only open to Windsor Yacht Club members. Ken Crooks, who is currently a member on the Windsor Yacht Club Race Committee, is a co-founder of the race. “That man right there Ken Crooks, he started the whole sailing program here at Windsor. And this race in particular,” says Janisse.

“Cy Lane and I started the race in 1974,” stated Crooks. “Cy Lane that year had just bought a brand new boat that they named Chimo. His wife Beverly said we’re not buying the boat unless you give us a half hull.” So Hughes Boat Works which was located just outside of London, Ontario, gave Cy and Beverly, a half hull, along with their new Hughes 29 boat. Half hulls are wooden model ships featuring only one half of a boat’s hull without rigging or other fixtures. They are often hung on walls. 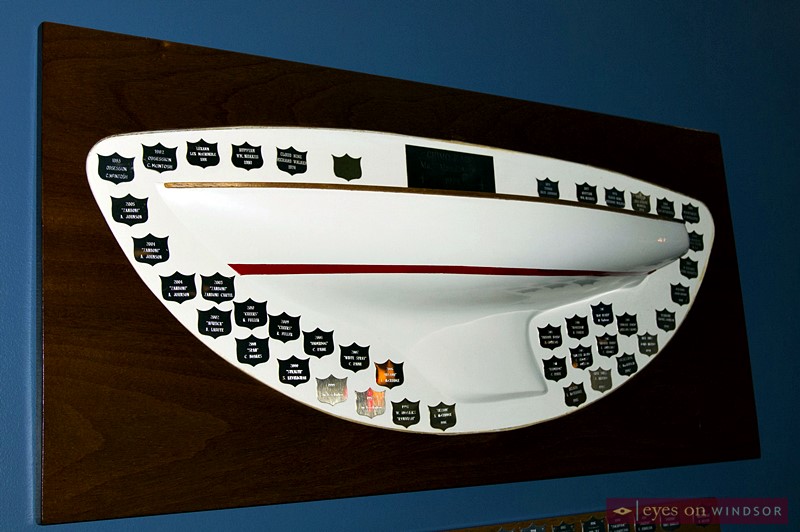 “Cy said we need to have a race that’s for the Windsor Yacht Club only,” explained Crooks. “So he came to me because I was Race Chairman at the time. So we talked and we said we have to have some kind of a trophy for this race. And we said why don’t we have that (the half hull) for a trophy. She (Beverly) said hold on guys that’s my model. After a while she said ok as long as it’s won by a Windsor Yacht Club member.”

“Well the American boats love coming over, but they got to the point where they said, how come we can’t win that trophy? So now we have that trophy for club (WYC) boats and we have another one for the overall winner no matter where the hell you come from.”

In later years a sculptured aluminum sailboat made by Canadian artist Ron Hoselton was added to the Chimo race as a trophy awarded to any boat regardless of the club where it came from. 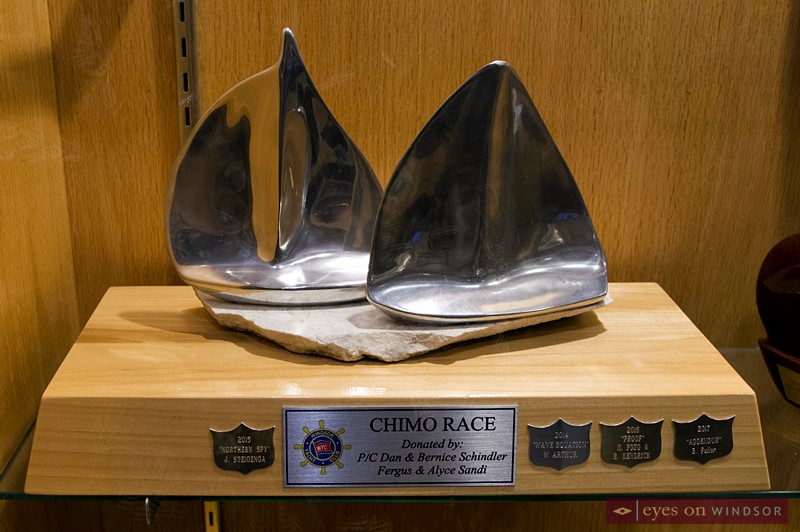 Overall International Chimo Race trophy showcased in a display case inside the entrance to the Windsor Yacht Club on October 3, 2018. Photo by Eric Bonnici / Eyes On Windsor.

Crooks says, “Chimo is an Inuit greeting word, it’s like saying hey how are you, or hello, or good show guys, or something to that effect.” A press release issued by the Windsor Yacht Club says Chimo in the Inuktitut language of Northern Canada means, “I am friendly.” Since the race was in cooler weather the original organizers thought it was a good fit.

Winners will be formally honoured at a private awards banquet on Saturday, October 13th, at the Windsor Yacht Club, where the trophies permanently reside. 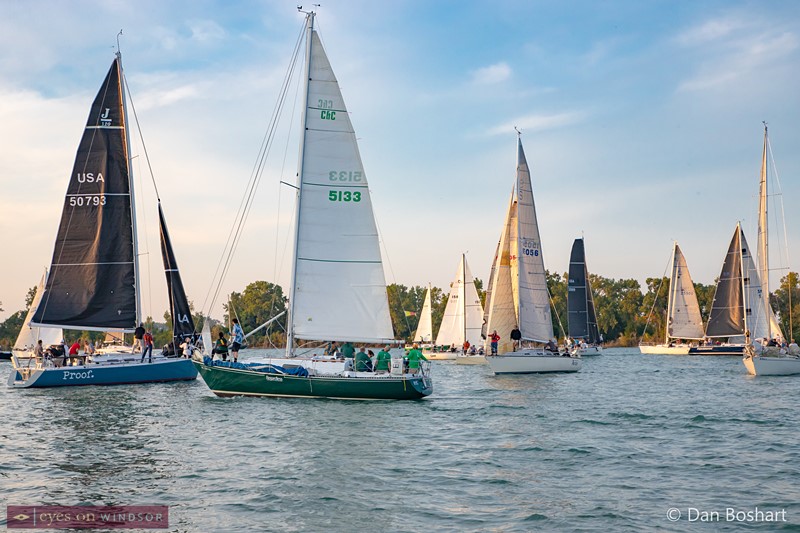 Sailboats prepare to start racing during the annual Chimo Race in front of the Windsor Yacht Club on October 3, 2018. Photo by Dan Boshart / Eyes On Windsor. 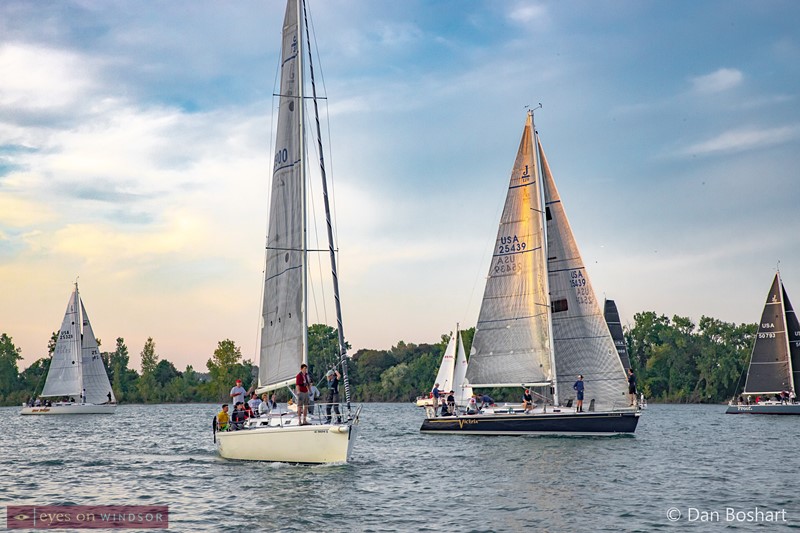 Sailboats prepare to start racing during the annual Chimo Race in front of the Windsor Yacht Club on October 3, 2018. Photo by Dan Boshart / Eyes On Windsor.

Photos in this article by Dan Boshart & Eric Bonnici / Eyes On Windsor.