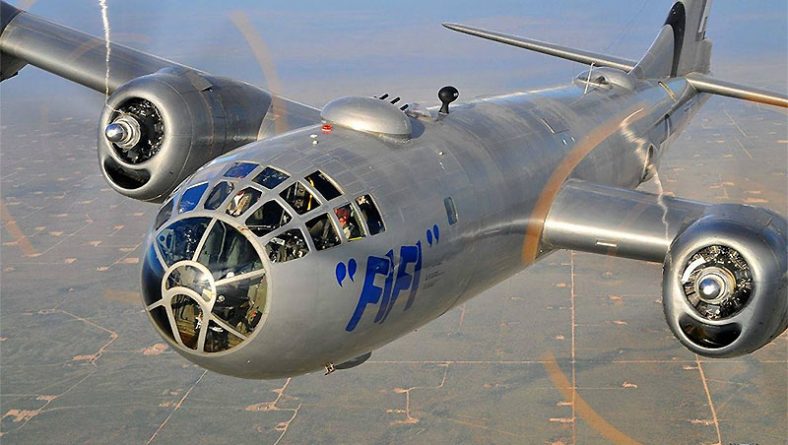 The U.S. Commemorative Air Force (CAF) AirPower History Tour will fly their vintage B-29 bomber into Windsor, Ontario, later this summer. The WWII B-29 Superfortress “FIFI”, one of only two in the world that are still airworthy, will be hosted by the Canadian Historical Aircraft Association at the CH2A Hangar next to Windsor International Airport from August 22-26, 2018.

This is the first time in history the CAF will bring it’s Second World War aviation national tour to Canada. Windsor is one of eight Canadian cities that will get to experience close up views of the aircraft, tours of the cockpit, talk to the crew, learn its history, and have the opportunity to purchase an actual ride on the plane. This gives participants the chance sit in the seat once occupied by a veteran and ride the plane as it flies through the sky.

B-29 bomber missions are credited as helping the United States to end WWII. It was the first aircraft to drop an atomic bomb (on Japan’s Hiroshima and Nagasaki in 1945).

The Boeing B-29 Superfortress, first flown in 1942, began active service in 1944. It was designed as a replacement for the older B-17s and B-24s, having the longer range and greater bomb loads necessary for operations in the World War II Pacific theater. The B-29 was also used in the Korean War in the early 1950s and was a staple of the U.S. Air Force until the late 1950s.

​FIFI was acquired by the CAF in the early 1970s when a group of CAF members found her at the U.S. Navy Proving Ground at China Lake, California where she was about to be used as a missile target. The airplane was rescued and restored and flew for over thirty years until 2006 when the chief pilot made the decision to ground her pending a complete power plant re-fit. What followed was an extensive four year restoration that included replacing all four engines with new custom built hybrid engines. FIFI returned to the sky in 2010 and since that time has traveled coast to coast attracting large crowds at every tour stop.

The B-29/B-24 Squadron of the Commemorative Air Force brings together the aircraft, pilots and crews from over 70 CAF units across the country to create the AirPower Squadron – an ever changing assortment of military aircraft touring together to bring the sights, sounds and smells of World War II aviation history to audiences across the United States. In 2018, the tour will make several stops in Canada for the very first time.

The public will be able to view the B-29 and other vintage military aircraft that will also be on display at the Canadian Historical Aircraft Association in Windsor, Ontario, from August 22 to 26 between 9:00 AM and 5:00 PM daily.

FIFI flights can be purchased in advance through the CAF website at www.airpowersquadron.org

Food and drinks will be available for purchase during the event.

For more information please visit the Eyes On Windsor events calendar listing for this event.

The Canadian Historical Aircraft Association is proud to uphold our mission to “Honour Canadian Veterans by preserving, maintaining, restoring, displaying, and demonstrating antique and vintage military and civilian aircraft and artifacts considered important to Canadian Aviation history.” In fulfilling our mission and gathering and telling the stories of our veterans, we help our children and grandchildren understand the sacrifices made for our freedom.