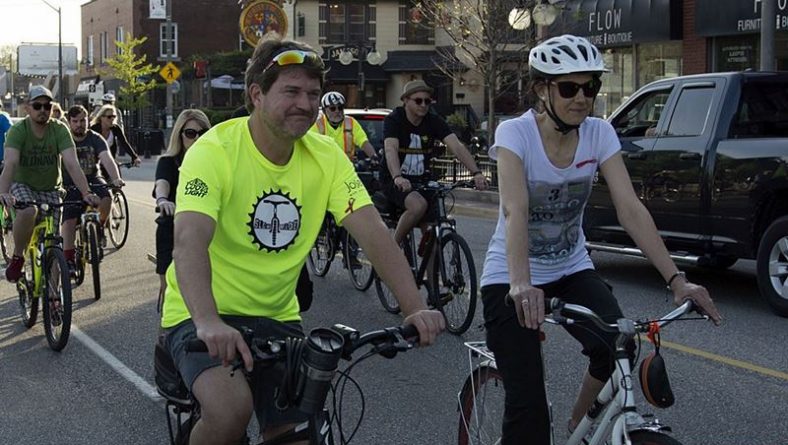 About 150 cyclists rode through the streets of Windsor during the 10th Annual Ride of Silence, a tribute to those who have been injured or killed while riding bikes on public roadways. The Ride of Silence takes place annually all around the world on the third Wednesday of May. This year 346 communities across the globe participated.

(Photo above: A group of bicyclists travelling along Wyandotte Street during the annual Ride of Silence on May 16, 2018. Photo by Eric Bonnici / Eyes On Windsor.) 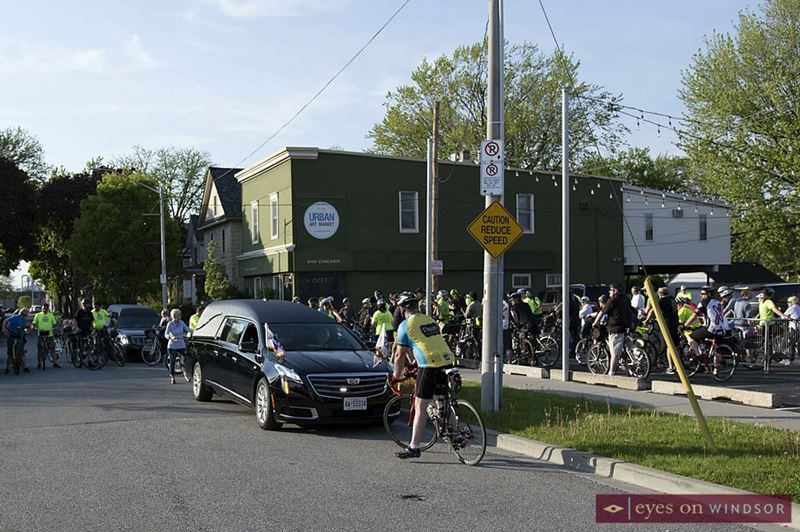 Cyclists at the Good Neighbour Restaurant parking lot prepare to begin the annual Ride of Silence on May 16, 2018. Photo by Eric Bonnici / Eyes On Windsor.

Cyclists gathered at the Good Neighbour Restaurant (formerly The Willistead) where a brief talk and reading of the Ride of Silence Poem took place before the ride commenced.

Bike Windsor Essex Executive Director Lori Newton addressed the crowd saying, “this is probably the most important bike ride we have in the city. We’re recognizing and honouring those who have been hurt and who have been killed on their bicycles.” 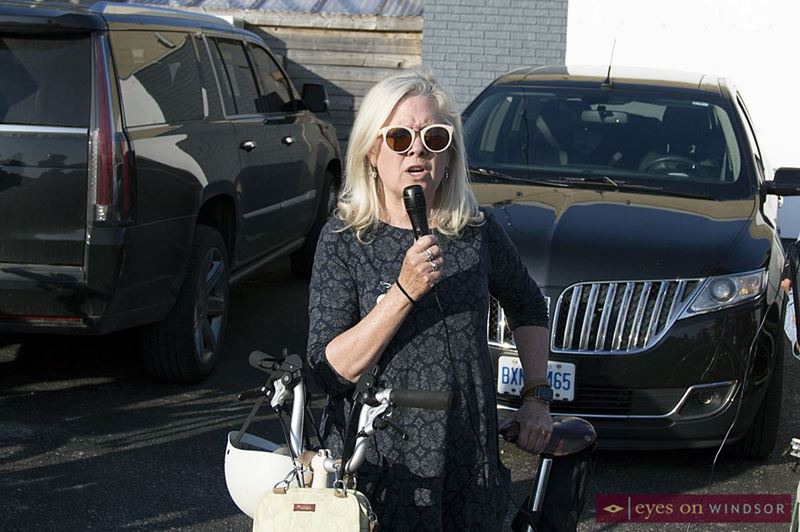 Bike Windsor Essex Executive Director Lori Newton speaks to participants of the Windsor Ride of Silence before the group starts the ride on May 16, 2018. Photo by Eric Bonnici / Eyes On Windsor.

In addition to remembering those injured or killed, the Ride of Silence raises awareness about safety, the need for bike infrastructure on roadways, and most importantly that cyclists have the legal right to share the road with motor vehicles. Drivers are often unaware of these rights.

“We’re not having fatalities in our city,” states Newton. “However, we know a lot of us have been hit. We need to report those hits and make sure they’re tracked. We need to tell our councillors and our city that we need better cycling infrastructure so that we’re all safe on the roads.”

Newton emphasizes, “we should all have the right to feel safe on our streets. We do need better infrastructure in the city, we’re getting there slowly but surely.” 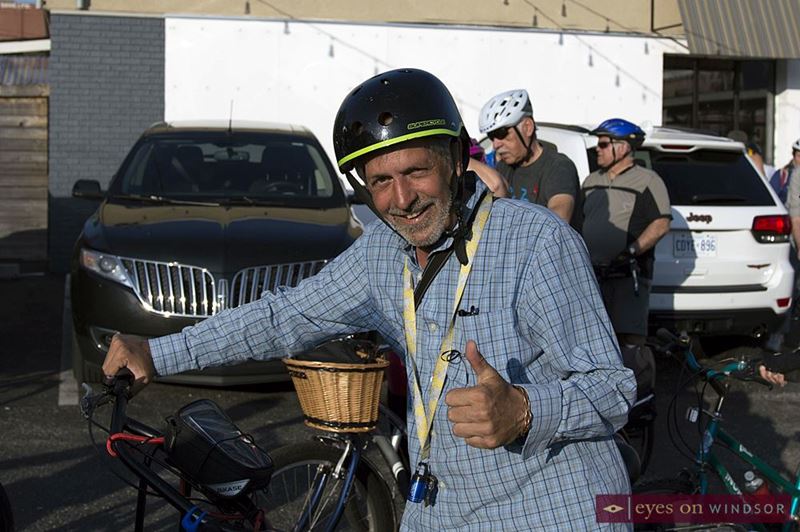 Don Martel gives a thumbs up just before starting the Ride of Silence in Windsor, Ontario, on May 16, 2018. Photo by Eric Bonnici / Eyes On Windsor

Local photographer Don Martel read the Ride of Silence Poem before the ride set out. On June 1st Martel will fly to Canada’s Arctic Circle (Tuktoyaktuk, Northwest Territories) and ride his bicycle all the way back to Windsor Essex County, finishing at Point Pelee National Park. He will shoot photographs along his journey, post about it on social media, and ultimately produce a book to accompany his photos. This “North To South Ride” event is being held mainly to raise awareness and funds for the Alzheimer Society of Windsor & Essex County. Some proceeds towards the end of his journey will go to Bike Friendly Windsor Essex. During this year’s Ride of Silence people from Tuktoyaktuk participated (while riding stationary bikes because of the challenges of the rough terrain in their area). 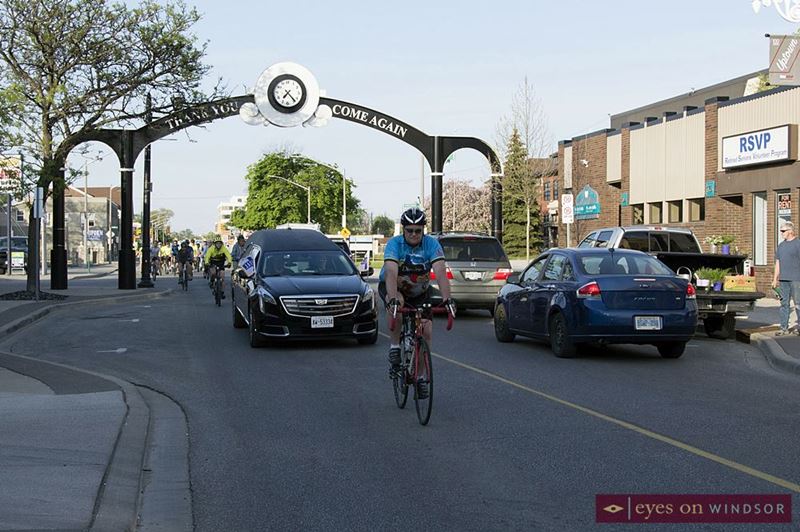 Leading the Windsor Ride of Silence, Troy Whittle and a hearse from Dignity Memorial, travel along Ottawa Street on May 16, 2018.

Following the reading of the poem, Troy Whittle of Dignity Memorial on his bicycle, along with a hearse, led the group of cyclists on the ride. A second hearse followed the riders from the rear. Participants rode slowly, without speaking, through the streets of Windsor. Roads along the route included Wyandotte Street, Walker Road, Ottawa Street, Howard Avenue, Giles Avenue, Bruce Avenue, and Riverside Drive. The ride concluded at the Good Neighbour where the silence was broken and participants took some time to socialize.

In concluding, operators of motor vehicles should remember they need to give cyclists space on the road, “preferably a meter and a half,” says Newton. 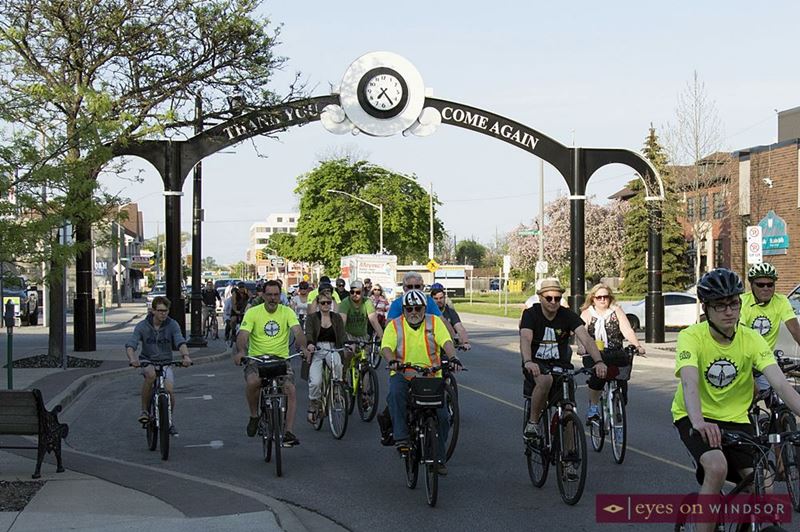 Cyclists taking part in the Ride of Silence travel along Ottawa Street in Windsor, Ontario, on May 16, 2018. Photo by Eric Bonnici / Eyes On Windsor. 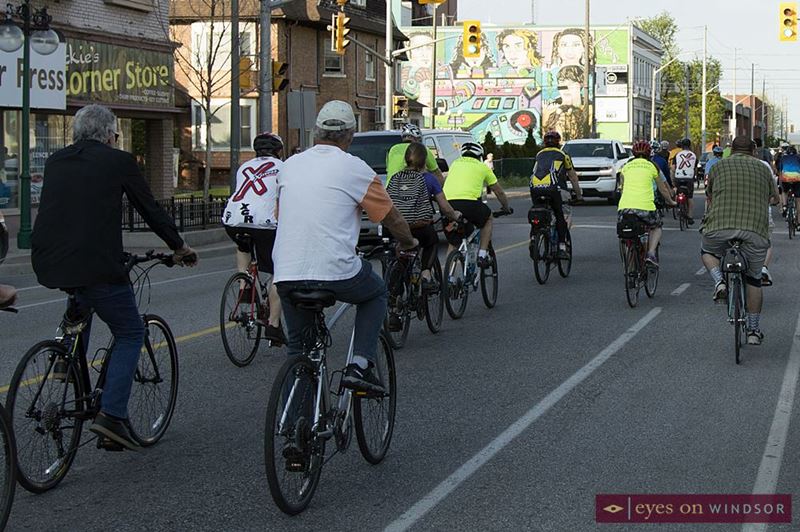 Windsor Ride of Silence cyclists travelling along Wyandotte Street in Walkerville on May 16, 2018. Photo by Eric Bonnici / Eyes On Windsor.