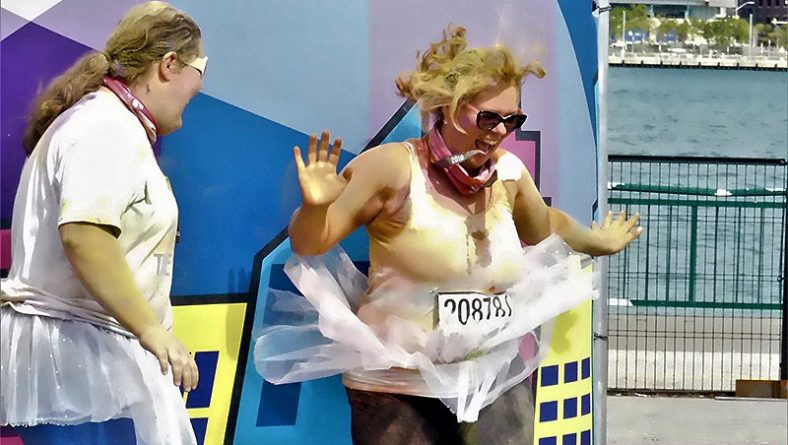 (Color Run Windsor post race runners used a little spent up energy to get their tutu’s moving on a trampoline set up at Windsor’s Riverfront Festival Plaza on Saturday, September 1, 2018. Photo above by Robert Tuomi / Eyes On Windsor.)

While this year’s Windsor Color Run Hero Tour is known as the Happiest 5k on the Planet, there was a noticeable side benefit. The many runners, 2,000 strong, added a unique multi-colour dimension to the core. After the race, which was centred at the Festival Plaza on the riverfront, the runners strolled the downtown taking in all it has to offer.

A tradition of the run is coating its participants with powders of various colours to, if nothing else, make a bright fashion statement while helping support a local charity.

Many of the mothers, daughter and even grandmothers who ran also sported tutus. Organizer Chris Uszynski says the popular attire has become a welcome staple of the run, just adding to its fun. According to Uszynski, the event is a rarity with a full spectrum of participants, some so young they are in strollers to ones in their 80s. 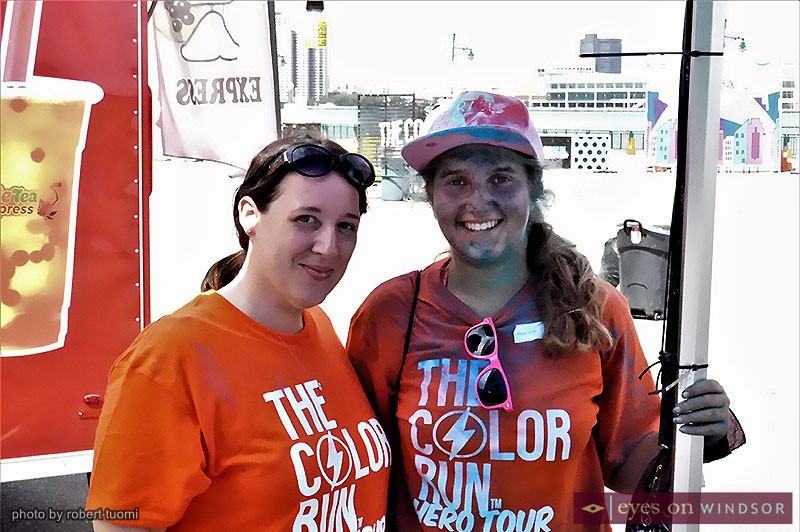 Over 150 volunteers – such as LaSalle’s Sandwich Secondary School student Kylie Pazner – took on a range of chores to keep the event running smoothly. Angela Belleau, Community Engagement and Volunteer Coordinator of the Alzheimer Society of Windsor/Essex Country, was in charge of assigning duties to the volunteers. Money raised from the run, at last count almost $4,400, is donated to the Society.

As an added incentive, many of the high school student volunteers used their contributed hours to add to the 40 hours of community service they are required to chalk up annually.

Although there were less runners this year, about half from previous years, the excitement of those who participated did not dwindle. Uszynski told Eyes On Windsor the main reason for a decline of some 50% was the long weekend. For him, Friday’s light traffic in the city was predictive in suggesting many residents were heading elsewhere to celebrate the Labour Day Monday holiday. 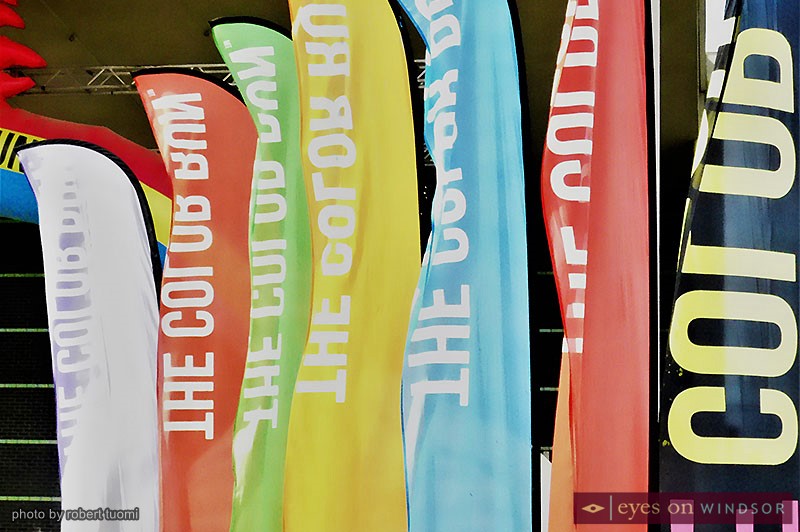 Both individuals and teams could be seen racing around the track. Top team was the Neon Ninjas which consisted of Michelle and Richard Untch, Lisa Teichroeb, Nancy Boldt along with Margaret and Mary Penner. Four year old Gracie Martindale was the most prolific fundraiser, attracting $259 in donations, well above her goal of $100. Her efforts were to honour her late “Grammies.”

The local event is a project of RunningFlat.

Today, colour runs are held in more than 30 countries around the world.