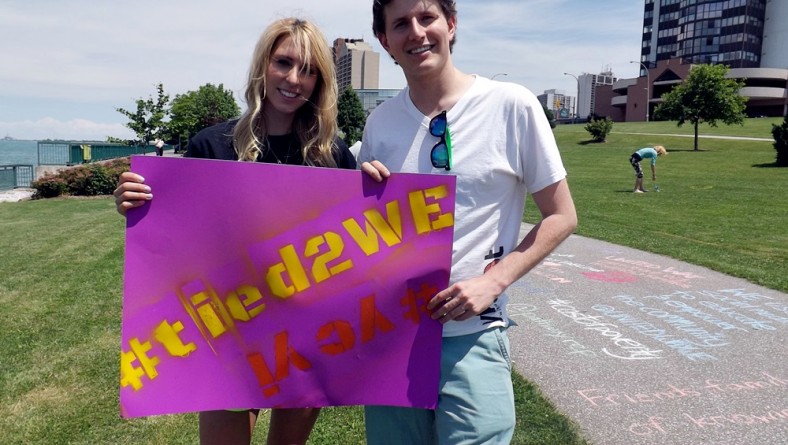 Mashable launched Social Media Day in 2010 as a way to recognize the social media phenomenon happening before our eyes. Each year, thousands of people organize hundreds of meet-ups. Countries from around the world come together every June to participate in this global movement.

The first Social Media Day in Windsor took place four years ago at the Vermouth Lounge patio in Downtown Windsor when a small group of social media enthusiasts talked about tools and social media platforms they liked. Yvonne Pilon is the Vice President of WEtech Alliance. “At that event we discussed our original hashtag. That’s where #WERocks came from. We thought that would be a very good way to promote the Windsor-Essex region. We wanted to be advocates, rocks, of our region,” she said. 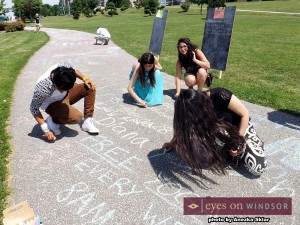 Among the people attending that memorable meeting were Eric Bonnici and Theresa Shpak from Eyes On Windsor. “We were hoping more people in our area will use the hashtag #WERocks when they tweet about awesome things happening in Windsor and Essex County. We wanted them to cover everything from people, community, and events to attractions. I thought it was a fantastic idea when we discussed the hashtag at the first Social Media Day held in Windsor,” Bonnici said.

The organizers of the third annual Windsor Social Media Day Chalk Tweet invited people from Windsor Essex to share their thoughts on the sidewalk along Windsor’ riverfront at the Odette Sculpture Park. Chalk artists had to keep their thoughts to 140 characters or less like just as it is in Twitter.

In cooperation with YKNOT Windsor-Essex, this year’s chalk tweet theme was “What ties you to Windsor-Essex”. The riverfront Sidewalk Chalk Display was covered with Tweets from the participants who shared reasons why they liked Windsor. Most of them felt tied to Windsor-Essex because of their family, friends, and the amazing community. The organizers took pictures with their mobile devices of the chalk-Tweets people wrote on the sidewalk and tweeted them live on Twitter.

“People benefit from Social Media Day by showing their pride to belong to the Windsor-Essex area,” said Dan Brown, YKNOT Windsor-Essex Coordinator. “We invited public both online and in person to come and share their pride. The #tied2WE campaign is meant to show pride between young people from our region, whether currently living in the area or not,” Brown added. 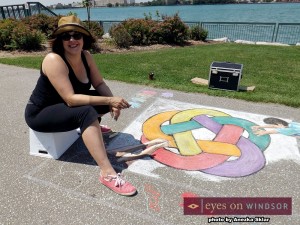 Windsor’s annual chalk-Tweet for Social Media Day grows every year and always brings something new. This year, local artist Julie Butler transformed the riverfront space into an amazing piece of art combining the figures with a logo of YKNOT Windsor-Essex. People were invited to contribute and be a part of Julie’s art work. Also new this year, participants could enjoy a sunny day on the grass with a locally grown picnic lunch and outdoor fun. Children had an amazing time playing games including bean bag toss and ladder ball.

The Art Council Windsor & Region asked people to express their ideas about the arts community in an outdoor interactive think tank “Back to the Drawing Board – Beyond Four Walls”. The participants shared their thoughts on “how they art everyday”, “how they connect to creativity”, and “what their arts community needs”. 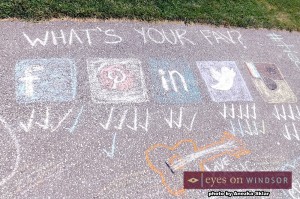 Windsor’s event was special because it mixed old-school communication with the high-tech world. It was also a great way for people that interact and build relationships online to meet face to face.