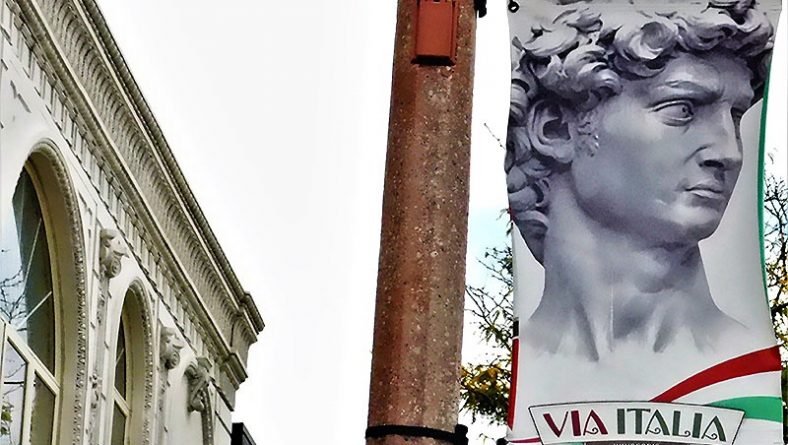 As if on command, at 11:30 Saturday morning, the clouds opened and the sun shone through. Stroll Windsor’s fifth and last event of the year was ready to welcome visitors to the city’s famed Via Italia. A grassroots, community initiative, Stroll Windsor encourages visitors to take a walk on the urban side of the Windsor Ontario’s various commercial areas. Four previous strolls have been held in this the organization’s inaugural year, two in Walkerville and two in Ford City. 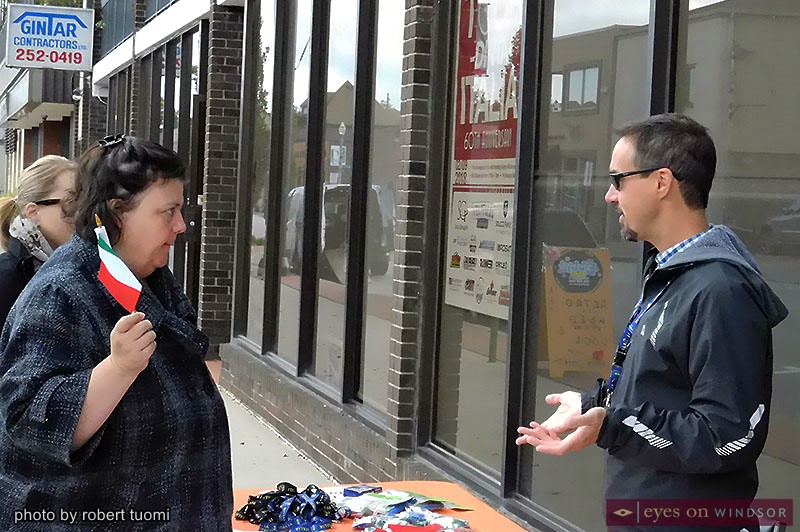 Stroll Windsor founder Justin Lafontaine (right) greets one of the guests on his Via Italia tour on Sat. Oct. 13, 2018. Photo by Robert Tuomi / Eyes On Windsor.

Already, organizer Justin Lafontaine says his group of volunteers is planning a full calendar for next year. If the number of those strolling down Erie Street in Via Italia, getting an introduction to its local merchants and restaurateurs, is any indication, it will be a good year.

Notable about the Strolls are the uniqueness of the featured streets. Via Italia, as the name implies, has turned some seven blocks of Erie Street into a collection of Italian restaurants and stores offering Italian goods.

Baccus Ristorante in Windsor’s Via Italia shown during the Stroll Windsor Via Italia Tour on Sat. Oct. 13, 2018. Photo by Robert Tuomi.

So far, Bacchus Ristorante is the first to take its street ambiance to the next level. Going well beyond a slightly altered storefront, it has created an amazing replication of a full European building, a painstaking job with no details spared. 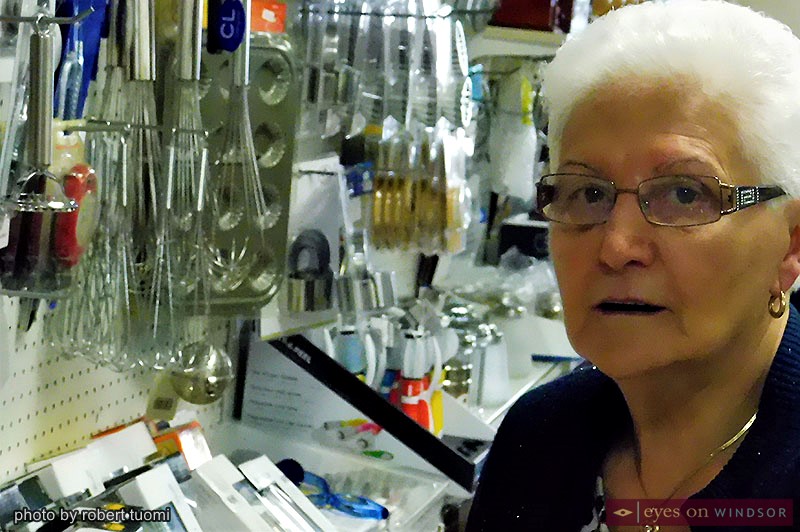 Giuliana D’Agostini, owner of Giuliana’s Housewares and Gifts among her many housewares on offer in Via Italia shown here on Oct. 13, 2018. Photo by Robert Tuomi / Eyes On Windsor.

One of the oldest shops is Giuliana’s Housewares and Gifts. As Lafontaine said, it was what inspired the launch of Stroll Windsor. Living in the area, he found the store had the kitchen items he needed and now prefers it over the region’s big box stores. Owner Giuliana D’Agostini, told Eyes on Windsor, she and her late husband Ernesto, have purveyed household essentials for over 50 years from the store.

In true Nonna fashion, she made sure this reporter had a cookie before leaving. Although her shop is filled with Italian memorabilia, like t-shirts and the like, she also offers a full line of made-in-Prince Edward Island Paderno cookware, bakeware and kitchenware. 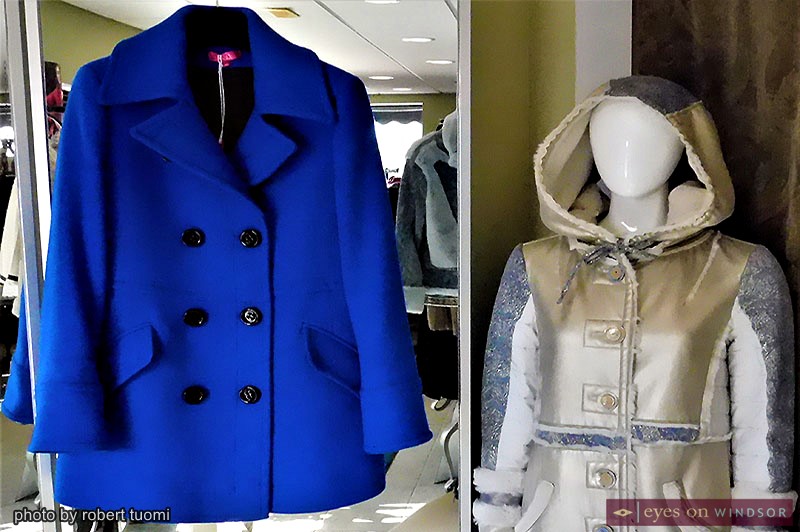 Two Italian designed coats at the LaurAngelo Boutique in Windsor, Ontario’s Via Italia. Photo by Robert Tuomi / Eyes On Windsor.

Those looking for up-to-date Italian fashion need only step into the LaurAngelo Boutique. Lately the store is ready for the coming cold months with finely tailored outwear, much of it from Italy, to match its inventory of woman’s evening and day wear. 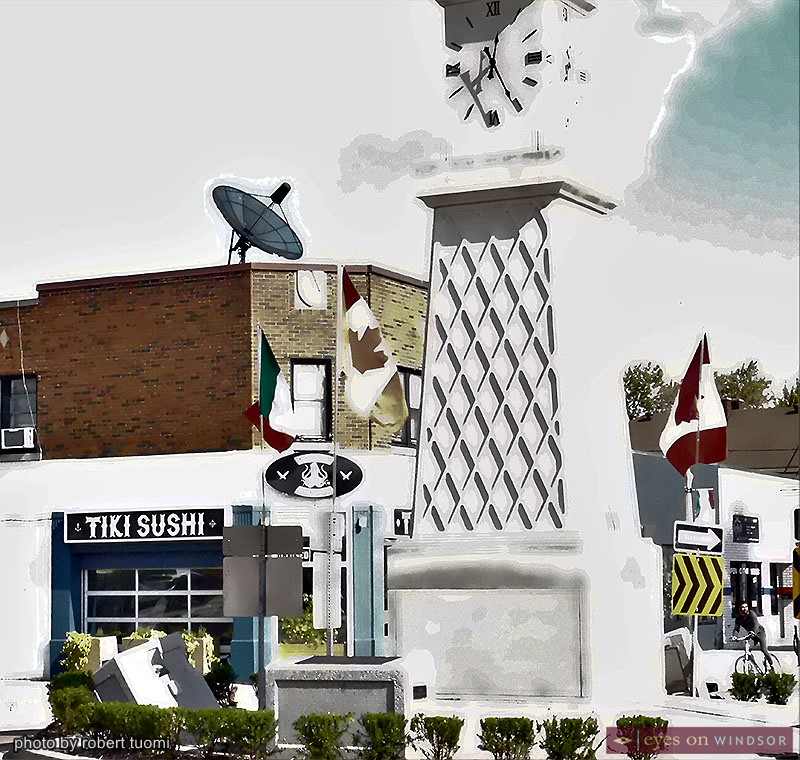 Both Tiki Sushi and the clock tower located at the roundabout, intersection of Parent Ave. and Erie St., in Windsor, Ontario, are examples of Via Italias diversification. Photo by Robert Tuomi / Eyes On Windsor.

While Italian flags can be seen throughout the “Via,” the strip is also somewhat diversified. One of its most iconic features, a 33-foot clock tower, in the Erie Street/Parent Avenue traffic circle, honours a doctor born in Yugoslavia. For over 50 years beloved Dr. Lazar Javanovic tended to patients in the area.

Just down from the clock tower, across from Motor Burger, is Let’s Communicate. There speech pathologist Jessie Lopez uses science to help children and adults with speech issues. While baby talk is admired in babies, it becomes a problem as they grow. 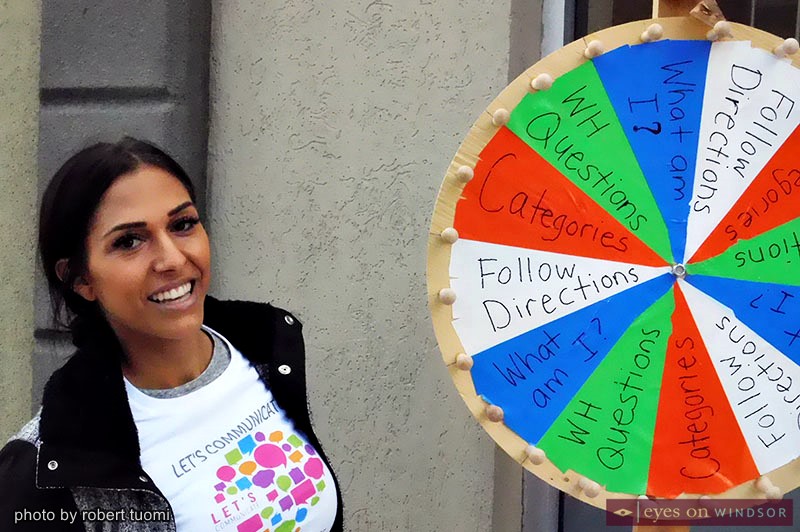 Lopez uses her knowledge of speech pathology to re-train her patient’s tongue positions when they speak. One of the most common problems is correct pronunciation of such letters as “r” which often end up sounding like a “w,” as in wrabbit. It can take weeks or months to achieve the desired change. 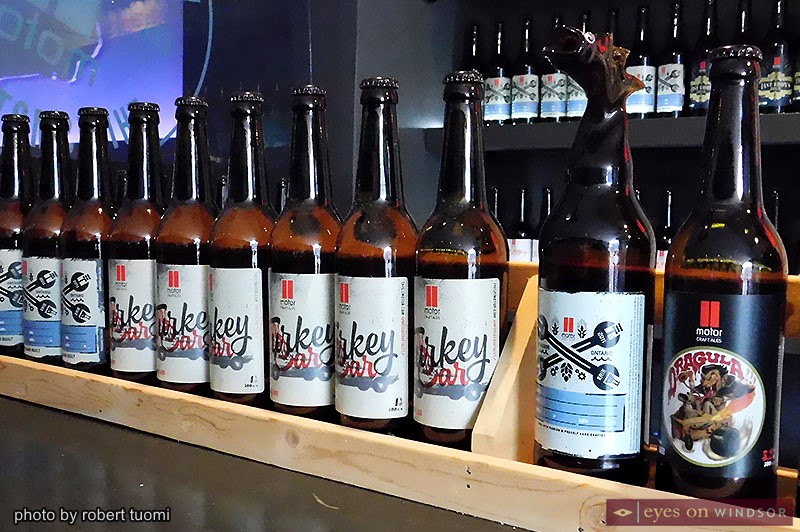 A selection of Motor Craft Ales on display at Motorburger in Windsor, Ontario, during the Stroll Windsor Via Italia tour on Oct. 13, 2018. Photo by Robert Tuomi.

Motor Burger is the street’s only craft brewery, an adjunct to one of the city’s top restaurants. Its patrons can select from a variety of beers on offer, with names reflecting its passion for the automobile. This includes the current very scary Dragula, a Schwarzbier Black Lager. 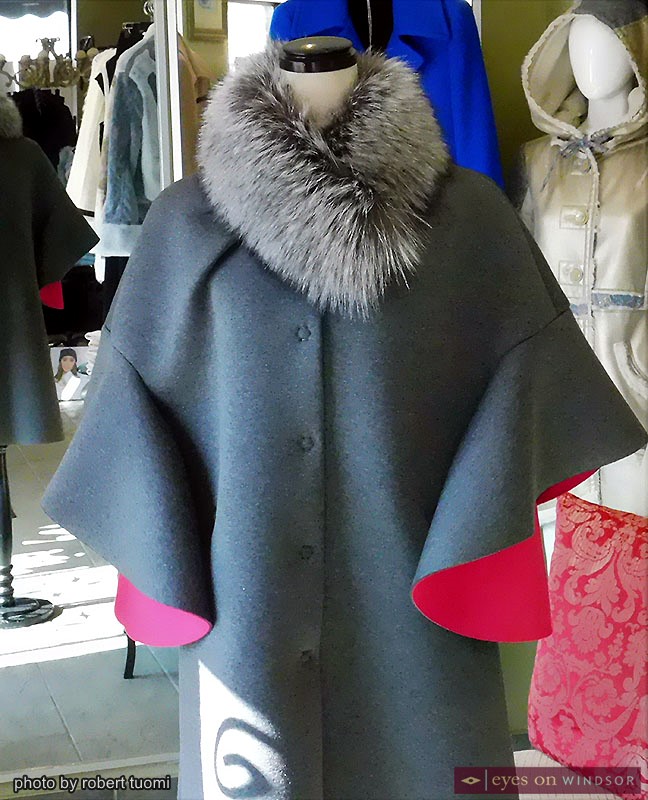 A Canadian designed winter coat on display in the front window of LaurAngelo Boutique located in Via Italia, Windsor, Ontario’s Italian neighbourhood. Photo by Robert Tuomi / Eyes On Windsor. 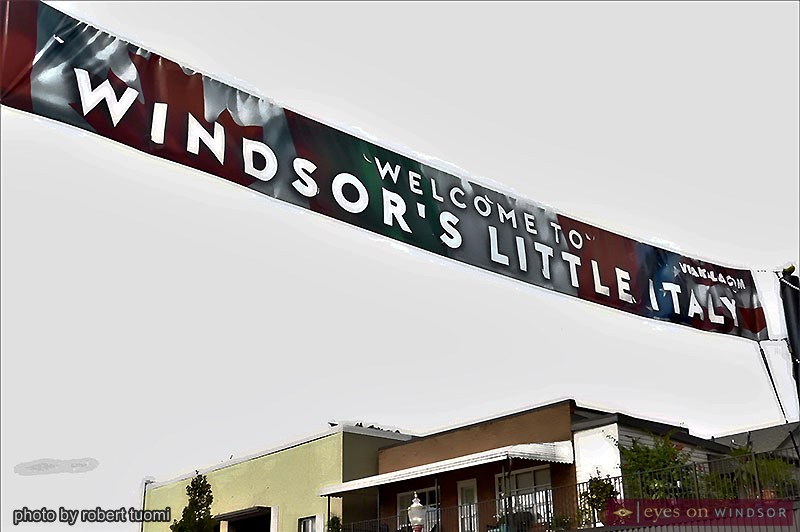 A banner hanging over Erie Street in Windsor, Ontario, welcomes visitors to the Italian district known as Via Italia. Photo by Robert Tuomi / Eyes On Windsor.