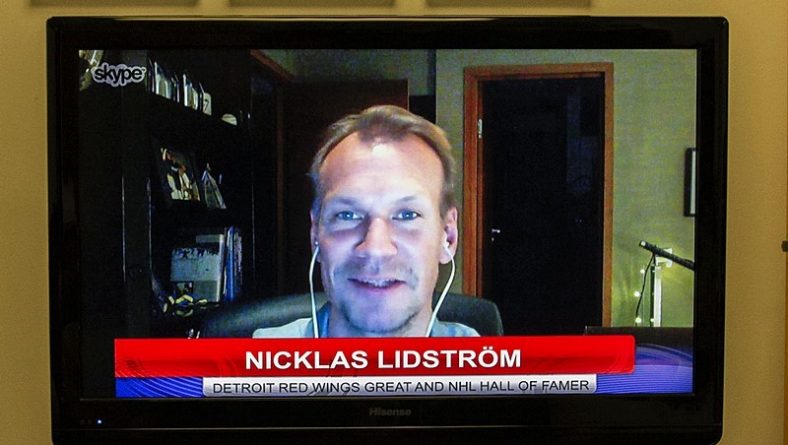 NHL Hall of Famer and Detroit Red Wings great Nicklas Lidstrom has been announced as the 2019 WESPY Awards keynote speaker. Organizers of the Windsor Essex Sports Persons of the Year Awards held a press conferences at the WEDIGITAL studio (formerly WE-TV) this morning (Dec. 12). Lidstrom was on hand for the announcement via a Skype video conference and took the time to answer questions from the media.

Widely considered one of the greatest defenseman of all time, Lidström was awarded the Norris Trophy seven times, a feat matched by only two other players: Doug Harvey and by Bobby Orr (who won the trophy eight times). Lidström was nominated for the award a total of 12 times in his last 14 seasons in the NHL, the first three times finishing as the runner-up, and won it in seven of his last ten (2004–05 had no winner due to the NHL lockout). In 14 consecutive seasons (since 1995–96), he finished no lower than sixth place in Norris Trophy voting.

Lidström played his entire 20-year NHL career with the Detroit Red Wings, finishing his career with the second-most Stanley Cup playoff games played in NHL history, with 263 appearances (Chris Chelios ranks first with 266). He was a member of four Stanley Cup-winning teams in 1996–97, 1997–98, 2001–02 and 2007–08. With the exception of the cancelled 2004–05 season lockout year, Lidström played in the playoffs for an NHL record 20 consecutive seasons (an honor he shares with Larry Robinson).

Known for his durability, Lidström consistently ranked amongst the top in the NHL in ice time per game. He averaged 28:07 minutes in the 2005–06 season, a career high. He won three consecutive Norris Trophies, from 2001 to 2003, becoming the first defenceman since Bobby Orr to win three straight. In the 2003–04 season, he played in his 1,000th game of his career, having missed only 17 games in 12-and-a-half seasons (1994–95 was shortened to 48 games instead of the usual 82 by a labour dispute).

In the 2002 Stanley Cup playoffs, Lidström was named the winner of the Conn Smythe Trophy as most valuable player during the playoffs, becoming the first European to ever be awarded the trophy.

Chair of the WESPY selection committee, Royal Church, spoke during the conference and highlighted that the public is welcome to nominate local athletes, coaches, and / or teams for the awards by filling out the form at http://thewespys.ca/nominations/

The press conference was streamed live over the internet this morning by WEDIGITAL.CA

Each year the WESPY Awards ceremony pays tribute to the Windsor Essex sports community including athletes, coaches, teams, volunteers, and administrators from all disciplines for their accomplishments and contributions to sports. The 2019 WESPY Awards are set for Monday April 15th at the Giovanni Caboto Club.