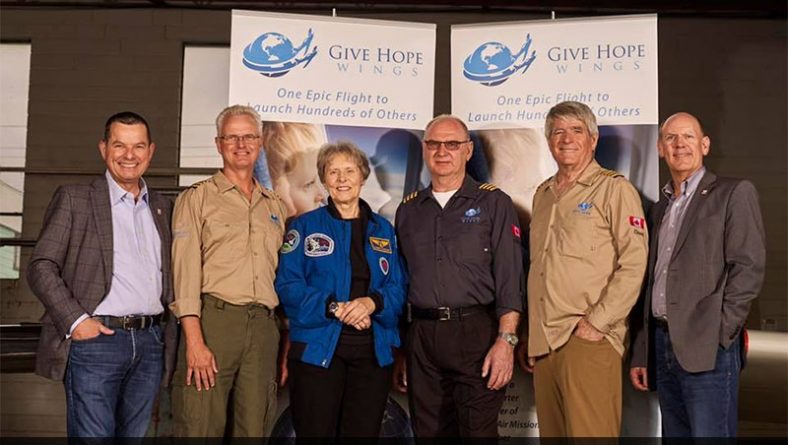 The public will have to the opportunity to meet Canada’s first female astronaut at Windsor’s Canadian Historical Aircraft Association Hangar (CH2A) during a charity aviation event being held early in November 2017.

Canada’s first female astronaut, Dr. Roberta Bondar, will be the headlining guest speaker at the Give Hope Wings fundraiser in support of the Hope Air charity.

Hope Air is a national charity that arranges free flights for Canadians in financial need who must travel to receive healthcare far from home. Since its inception in 1986, Hope Air has arranged more than 111,000 free flights. The service has helped countless Canadian families over the years.

“I have been a keen supporter and admirer of the Hope Air Mission for a number of years,” said Dr. Bondar – physician, scientist, astronaut and pilot. “When I heard about this innovative project by

Dr. Bondar was the world’s first neurologist in space and is globally recognized for her pioneering contribution to space medicine research. Aboard the Space Shuttle Discovery mission STS-42 in 1992, she conducted experiments in the first International Microgravity Laboratory, a precursor to the International Space Station.

She holds a BSc in Zoology and Agriculture, an MSc in Experimental Pathology, a PhD in Neurobiology, an MD and is a board-certified Neurologist with the Royal College of Physicians and Surgeons of Canada. She sub-specialized in Neuro-ophthalmology at Tufts New England Medical Center in Boston and at Toronto Western Hospital.

In addition, local Windsorite, aviation enthusiast, pilot and aircraft builder Russ Airey will be attendance at the Give Hope Wings chairty event. In January and February 2018, Airey will be part of Give Hope Wings with a three man crew of volunteer pilots flying two homebuilt aircraft 20,000 miles in support of Hope Air. Airey’s Give Hope Wings crew will circumnavigate Central and South America visiting 20 countries along their route. Airey will pilot his RV9A two-seat airplane on this adventure. Their goal is to raise $500,000 for Hope Air.

The “Give Hope Wings” Fundraiser will be held Friday, November 3, 2017 from 6 p.m. to 10 p.m. at the Canadian
Historical Aircraft Association. Details about the event can be found on the Give Hope Wings event page on the Eyes On Windsor events calendar.

The Canadian Historical Aircraft Association is proud to uphold their mission to “Honour Canadian Veterans by preserving, maintaining, restoring, displaying, and demonstrating antique and vintage military and civilian aircraft and artifacts considered important to Canadian Aviation history”. In fulfilling their mission and gathering and telling the stories of our veterans, they help our children and grandchildren understand the sacrifices made for our freedom.

The Association hangar is located on the west side of the Windsor International Airport and is open Tuesdays, Thursdays, and Saturdays from 10 a.m. to 3 p.m.